As we wrote in The Buried Heart of Mexico, Mexico City's Centro Histórico was previously the center of the Mexíca-Azteca city founded in 1325: México-Tenochtitlán.

In 1521, when Cortés defeated the Mexica in the name of the Christian god and the Spanish king, he had the surviving native Mexica expelled to Tlatelolco, just to the north, their city razed and the beginnings of a new Mexico City built above the old urban center. So the Spanish city and its contemporary Colonia Centro rest upon the buried indigenous capital.


The Palace and the Cathedral—framing the Zócalo and embodying in their grandeur the power of the Spanish State and the Catholic Church—were built over their respective political and religious predecessors, the "New Houses", the palaces of Moctezuma II, and the teocalli, house of god, Temple or Pyramid of the Sun. But that was only part of the task of attempting to replace one political entity, belief system and civilization with another.

Indigenous Context of the Spanish Conquest

As we wrote in our description of the geographic patchwork quilt that is contemporary Mexico City, it is an amalgam, not only of the colonial Centro Historico and its expansion beginning in the late 19th and across the 20th century, but also of ancient indigenous pueblos, villages, and altepetls, city-states that, beginning some two thousand years ago, were established on the shores of the five lakes at the center of the Valley of Anahuac and on some of their other islands as well.


"Gazing on such wonderful sights, we did not know what to say, or whether what appeared before us was real, for on one side, on the land, there were many great cities, and in the lake ever so many more, and the lake itself was crowded with canoes, and in the Causeway were many bridges at intervals, and in front of us stood the great City of Mexico." (The Discovery and Conquest of Mexico, by Bernal Díaz del Castillo, translated by A. P. Maudslay, De Capo Press, 1996)

So Cortés not only had to transform the center of power, he also had to transform a geographically extensive civilization and culture. This meant implementing a program of radical reconstruction of the culture, of the peoples' customary ways of being and their organizing beliefs.

It required the "conversion" of el pueblo, the people residing in hundreds of villages in the Valley and thousands across the territory of Nuevo España, which soon extended south to South America and north to the nomadic tribes in the deserts of Sonora and Chihuahua and, eventually, beyond to what is now the Southwest United States. This project was the "Spiritual Conquest", which followed the military one.

As with most all of Mexican history, this Conquest is not something confined to "history", to the past. Remarkably, to this day the landmarks of this process remain standing. They are the ubiquitous churches and chapels established by various groups of Spanish Catholic friars—Franciscans, Dominicans, Augustinians, and many others—in the multitudinous colonial-period cities, towns and pueblos all across Mexico.

These landmarks of the Spiritual Conquest embody the political and cultural entrance of the Spanish into the indigenous communities. This entrance was carried out literally and symbolically by the "vertical" imposition of the Catholic God with the attendant belief system and priestly institutions, over the indigenous ones. Sites where Catholic churches were erected were not random. At the geographic center of the ancient villages, they were often erected atop the ruins of the temples of their indigenous predecessors, torn down by the Spanish friars.

This act of destruction of one culture and the attempt to create another had a paradoxical result. In the effort to replace the old gods and the religious practices honoring them, the Spanish established a physical, cultural and spiritual continuity with those very predecessors. It is noteworthy that the Franciscans, and other religious orders that followed them in coming to Nueva España, while they had indigenous temples torn down and statues of their gods destroyed, they deliberately adopted a strategy of seeking out elements in indigenous religious practice that had similarities to Catholic Christianity and building on them to teach the new faith as an evolution from the old, rather than trying to completely suppress old beliefs and practices. The indigenous were seen as children who needed to be "brought up" to the religious and cultural maturity of Spanish Catholicism.

Landmarks of the Spiritual Conquest in Mexico City

The existence and centrality of colonial churches is taken for granted in Mexico's colonial-era cities and towns, as well as in the Centro Histórico of Mexico City, with its Metropolitan Cathedral and many Baroque churches. What is surprising, at least to the foreigner, is that an almost countless number of such churches and chapels still stand in all the sixteen delagaciones, boroughs of the capital, and in hundreds of their colonias, neighborhoods, and throughout the surrounding urban sea that has replaced the original lakes and now fills the Valley of Mexico with 21 million people, the world's fourth-largest metropolis.

What is even more remarkable is that around some of these churches there still survive vital pueblos originarios, original villages, whose contemporary residents trace their roots back to before the Spanish Conquest. They are living historical islands in the urban sea.

The Mexico City government officially recognizes 150 such original villages and has programs to support their continued life. There are more sites where the original churches still stand as landmarks of the Spiritual Conquest, but the people have been displaced by chilangos, outsiders who have moved in as part of the expansion of the modern city. 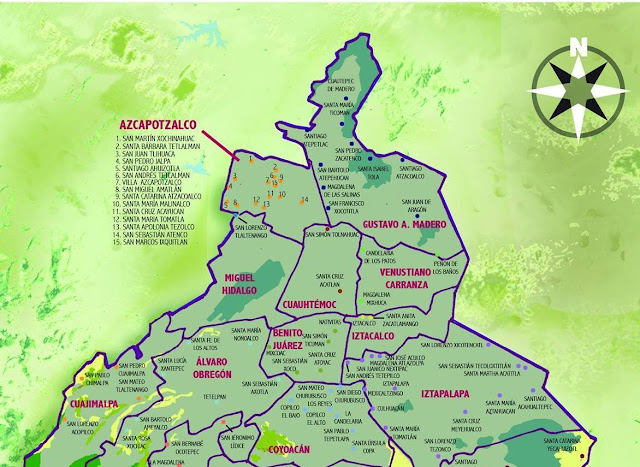 The churches—physically marking the location of these original villages—remain the centers of barrio life. Each has its patron saint, assigned by the original friars and whose name is often combined with the original indigenous name of the settlement (e.g., San Matéo Churubusco, San Marcos Ixquitlán, San Pedro Cuajimalpa, Santa María Aztahuacán).


The church ... plays an important role in the life of the people, since it is through the patron saint that the people of the community acquire a strong sense of belonging to their community. (The patron saint) constitutes the basis of social organization (embodied in the mayordomo, the head of the fiestas' mayordomía [commitee]) and symbolic consensus, since the patron saint is considered not only as the protector and the defender of the pueblo, but as the center where all social relations converge, the vital principle of the community and a key element of its identity.

Every year, each pueblo celebrates its patron saint's day, often along with other fiestas on the Catholic religious calendar such as Navidad (Christmas), Three Kings Day (Januaary 6), Candelaria (February 2), Semana Santa (Holy Week), Trinity Sunday (at the end of the Easter Season), Corpus Cristi (The Body of Christ, May or June,), the Assumption of the Virgin Mary into Heaven (August 15) and Día de los Muertos, Day of the Dead (November 1-2).

These fiestas are organized by committees of residents, often composed of key families of long-standing status, who by their faithful work earn the privilege of increasing responsibilities. The ultimate responsibility is to serve as mayordomo (head caretaker).


Pueblos maintain connections with one another by means of "visits" of their saints to one another on their respective saint days. The visiting saints participate in the procession, a central event in the fiesta, and the celebrating parish hosts its guests with free, communally prepared meals. Some saints even spend part of the year on visitas, visits to various neighboring pueblos. Hosting these visits is a great honor.

So, with this understanding, we head out on the next series of Mexico City Ambles, our own recorridos of a number of these original villages and their churches—living landmarks of the Spiritual Conquest begun by the Catholic friars, summoned from Spain by Cortés, nearly 500 years ago.