More than once in our Ambles through Mexico City we have come across small treasures hidden in plain sight. Such was the case recently when wondering whether there were any fiestas we could visit on the coming Sunday, we came across an announcement of one at the Church of Santa María Natividad, in the Delegación Benito Juárez, the borough just north of our base in Coyoacán. The Church would be celebrating the birthday of the Virgin Mary, designated by the Church to be on September 8.


Delegación Benito Juárez is not known for having original pueblos, as much of it was lake when the Spanish arrived and now it is mostly upper-middle class apartment buildings and commercial centers. We had previously visited the pueblos of Xoco and Mixcoac, the former still a working barrio, the latter converted by the Spanish into a well-to-do neighbohood. We knew there were two or three others, hidden away in the urban sprawl, but we had not discovered their patron saints' days, which make the best time to visit.

The Church of Santa María Natividad sits in Colonia Niños Heroes, named for the military cadets who, according to legend, fought to their deaths to defend Chapultepec Castle, then the military academy, from invading forces of the U.S. Army in 1847. Obviously, the colonia's name was a more recent one for the area.

From the fiesta announcement, we learned that when the Spanish arrived it was the pueblo of Tepetlalzingo. In 1585, Franciscans built a chapel and a convent there dedicated to the Nativity, the birth, of the Virgin Maria. It still stands as one of the original Catholic Churches built in the 16th century in the Valley of Mexico.


So on the Sunday morning of the fiesta weekend, we take a taxi up the Eje (Eh-hey) Central, the Central Axis, aka Lázaro Cárdenas, named after the president of the 1930s. The Eje is a major, multi-lane, one-way roadway that heads straight north from the border between Coyoacán and Benito Juárez, to the west side of Centro Historico, passing by Bellas Artes, and traveling on to Tlalteloco, that ancient neighbor and then subject of Tenochtitlan. Where it passes through Centro Historico, former Tenochtitlan, it is thought that it was originally a canal crossing the island.

The Church of Santa María Natividad sits directly on the east side of the Eje, indicating that Tepetlalzingo was on a route that ran straight north to the capital city. We have traveled up the Eje numerous times to get to Centro, but never noticed the church. We were unknowingly passing by another historical treasure of the era of the Spiritual Conquest.

Within a few minutes, our driver points out, "There's the fiesta." He stops and, paying him, we get out. A traditional, colorful portada frames the entrance from the street into the church atrio, atrium. A number of vendors are selling food from puestos, stalls, set up along the street. From inside, we can hear the sound of Aztec drums beating. It is definitely a fiesta!

Inside the atrio, in the front left corner, an outdoor altar has been set up with a large statue of a crucified Christ, and decorated with bouquets of flowers. Plastic stools are set up in rows, indicating that a Mass will likely be celebrated there later today. 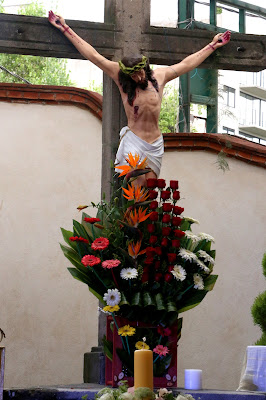 
Outside, to the left of the church, Aztec dancers are intently engaged in their ritualized steps. A young drummer sets the forceful rhythm. 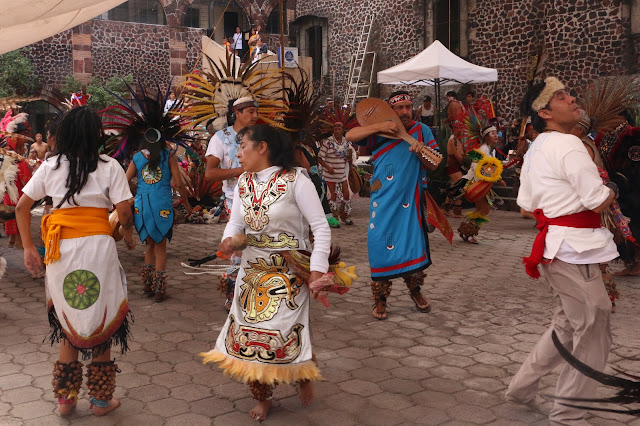 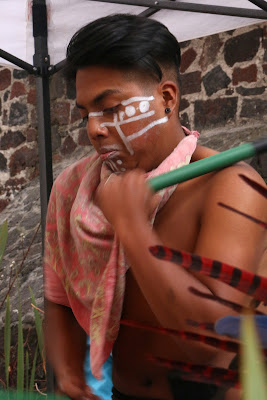 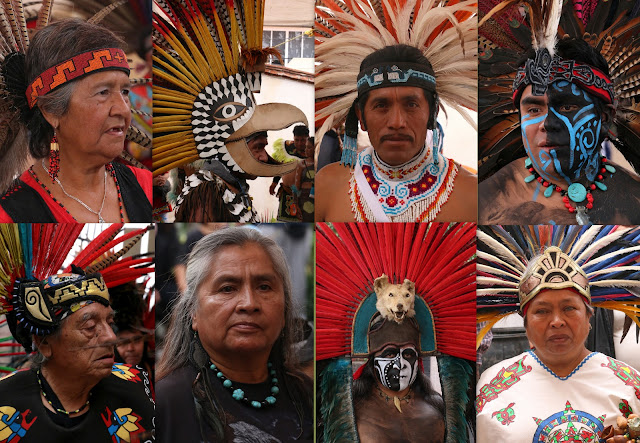 The Aztec dancers are followed by quite a contrasting form of traditional Mexican dance, one whose roots are in the other side of la Conquista, ballet folklorico, the largely Spanish-inspired, romantic dances whose steps and traditional dress have been modified in each of the country's regions or states to uniquely identify them. 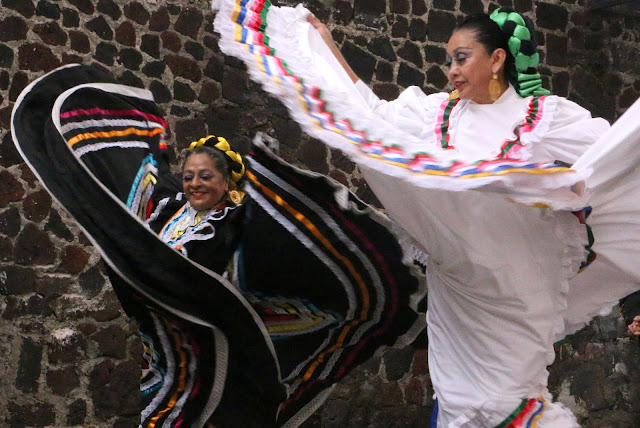 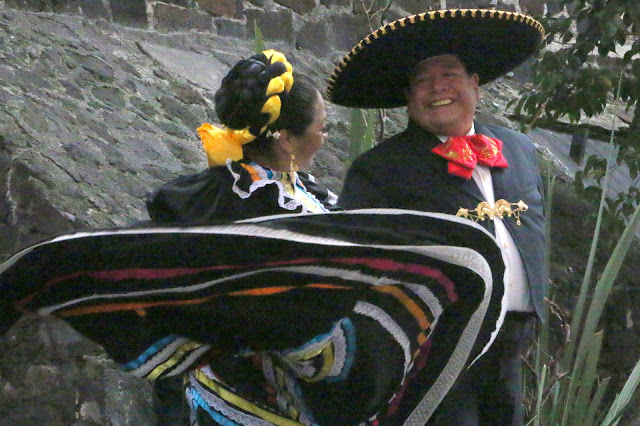 We had arrived at Santa María a little before noon, with no knowledge of the schedule of events. When we found one posted, it stated that the procession left the church at 10AM and was scheduled to return at 2PM, in time for the special Mass. So as the folkloric dancers finished (actually cut short by a short rain shower), we went out to the street to see if there were any signs of the procession.

We did not have to wait long. We could see that there was no traffic on Eje Central and from a block south came the sounds of cohetes, the rocket-style firecrackers that announce processions and each of the events of a fiesta.


So here, on the main avenue leading to the Centro Historico of the City, in the midst of an otherwise mostly modern urban borough, we have encountered another vestige of the Spiritual Conquest of the 16th century, the Church of Santa María Natividad, St. Mary's Birthday.

And in its fiesta we once again experience representations the many facets of the evolution of indigenous "Aztec" culture from its own rituals of drums and dancing, through the introduction of Spanish culture and its transformation into a Mexican one. And as an added gift, it is embellished with a cabalgata, a parade of horses and their riders in traditional Spanish-Mexican attire, another small gem added to our Ambles.


Island "Lost" in the Urban Sea

At the time of our visit to the fiesta, we wondered, as we always do, as to what was the original location of the pueblo Tepetlalzingo, to Lake Texcoco and the surrounding Valley of Anahuac before the Spanish arrived. It's current incarnation, Niños Heroes, is near the Calzada de Tlalpan, which was originally the causeway built by the Mexica from Tenochtitlan, south, across the Lake. Was Tepetlalzingo on the shore of the lake or an island in it? But we could find no historical source to provide an answer.

The answer came in the fall of 2018, when another original pueblo in Benito Juárez, Santa Cruz Atoyac, published a map of the original pueblos around the southwest bay of the lake on their Facebook page.

Posted by Reed Brundage at 12:46 PM No comments: