Delegación Tlalpan is one of the two most southern delegaciones (boroughs, since 2016 called alcaldías, mayoralities) of Mexico City. Encompassing 312 sq. kilometers or 120 sq. miles (slightly smaller than Philadelphia, Atlanta or Detroit, slightly bigger than the Borough of Queens in New York City), it is also the largest delegación or alcaldía in Mexico City.


Tlalpan's population, however, is only about average for a delegación, 650,000, since only its northern quarter, part of the flat land of the Valley of Mexico, has become completely urbanized. This area still contains a number of indigenous pueblos, such as San Sebastián Huipulco, which we visited during its patron saint fiesta a couple of Augusts ago and San Pedro Mártir (which we hope to get to during its April patron saint fiesta).


To the south, the land initially rises gradually, then steeply into the volcanic mountains of the Sierra de Chichinautzin. We  have visited one original pueblo on these lower slopes, Chimalcoyotal. We discovered that it sits at a crossroad both ancient and modern. Before the 20th century, people could stop and rest before making the 3,000 foot ascent or descent — initially on foot; later on horseback — over the mountains.

They crossed the mountains (as does the modern expressway) via a pass at 10,000 feet on the way to and from Cuernavaca (once the indigenous city of Cuauhnāhuac, now the capital of the State of Morelos) and Acapulco (in the state of Guerrero on the Pacific Coast; in Colonial times it was the major port for trade with the Philippines and China via the Manila Galleon; today it is a resort).

Just west of the pass is Mt. Ajusco. At an altitude of nearly 13,000 feet, it reaches more than a mile above the Valley floor (7,260 feet) and is the highest mountain inside the city limits. (See our page Encountering Mexico City's Many Volcanoes: Giants on All Sides.)


In the mountains — at altitudes as high as 10,000 feet — are several traditional indigenous villages, one of which, Santa Maria Magdalena Petelacalco, we visited during Carnaval.


The political and — until recent times, with the arrival of malls — the commercial center of the area that is now Delegación Tlapan was originally an indigenous village also named Tlalpan. In the Nahuatl language it meant terra firma, i.e. solid ground, as it lay on volcanic rock from the nearby volcano, Xitle (the low, dark green hill below the left side of Mt. Ajusco in the photo above), which erupted in the first century CE. (See our page: Encountering Mexico City's Many Volcanoes: Little Volcanoes With Big Histories).

The History of Tlalpan


The original village — now officially called “Tlalpan Centro” — is often referred to as “the historic center of Tlalpan”. It has always been located at the intersection of a number of pathways that connected the Mexica capital of Tenochtitlan with villages in the southwestern part of the Valley, as they did when the Spanish arrived in 1519.


Under Spanish rule, all land became property of the Crown. The king chose to give part of the lands around Tlalpan, including the village, as an encomienda, land grant, to a conquistador, who turned the lands into a hacienda (agricultural estate) of orchards growing fruit to sell in the new Mexico City, far to the north. Other land in the area was granted back to the indigenous peoples, where they maintained pueblos (villages) and farmed the land communally. San Sebastián Huipulco and San Pedro Mártir are two of many examples of communal lands.


In 1645, the village was officially designated by the Crown as the Spanish Villa de San Agustín de las Cuevas. A Spanish settlement royally designated a Villa had higher status than a pueblo, but less than that of a ciudad, city. Villa Coyoacán had the same royally determined status. Its status was, perhaps, similar to an incorporated village in the U.S. — a legal, self-governing entity apart from a township, but not a city. The designation indicates that by 1645 the village was no longer an indigenous pueblo but a Spanish village.

With the expansion of the Federal District in the 1850s, the municipality was incorporated within the District. In 1928, Tlalpan became a delegación when municipalities in the Federal District were eliminated as part of a move to exert more federal control over the District. The village of Tlalpan continued to serve as the cabacera for the delegación. (See our page: How Mexico City Grew From an Island to a Metropolis.)

The most important change to the village of Tlalpan itself had, however, come about during the Colonial Period due to its location near the forests and mountains to its south. These made the area attractive to Mexico City's elite (limited to what is today's Centro), who built country homes and haciendas here, much as they did in other areas south of the city, such as in San Ángel (originally the indigenous village of Tenanitla) and Villa Coyoacán (which kept its indigenous name). As we note above, Tlalpan being designated la Villa de San Agustín de las Cuevas in 1645 indicates this transformation.

Many of these Spanish Colonial homes and manor houses of the former haciendas still remain in and round Tlalpan center. Even though Mexico City's urbanizing sprawl began to engulf this area starting in the mid-twentieth century, much of the former Villa has retained its provincial streets, older homes and other buildings with colorful colonial facades.

The center of this former village is the main square or garden officially called the Plaza de la Constitución, but better known as the Jardín Principal (Main Garden). A large kiosk or bandstand, added in the 19th century, stands in the center,


Around the original plaza, which has the tranquil feeling of a plaza in some smaller city in Mexico, a number of buildings have been converted into cafes, restaurants and museums.

Also facing the Jardín Principal is the Palacio de Gobierno (Government Palace), which was the site of the government of the State of Mexico when Tlalpan served as the state capital for six years in the early 19th century. Today, it serves as borough headquarters, ayuntamiento, although it is commonly referred to as the ex palacio municipal (former municipal palace). The current structure was built between 1989 and 1900 in Neoclassical style when the village was the cabacera, headquarters, of the Municipality of Tlalpan.

Under the portal running across the front are a series of murals portraying the history of the area from indigenous times up until the 19th century.


The esplanade in front of the Government Palace, is often used as a stage for presentations of cultural events.


Scattered among the cobblestone streets of the old village are a number of other notable houses and structures from various centuries. The Convent of the Capuchinas still functions as a convent. The Capilla del Calvario, Calvary Chapel, was built in the 17th century. The former house of the Count De Regla is found on Congreso Street, and on San Fernando Street is the house where José María Morelos y Pavón (hero of the War for Independence) was held prisoner before being moved to the Ciudadela in Centro and then executed. Another house on that street was occupied by Antonio López de Santa Anna (multiple times the president of Mexico between 1833 and 1855).

All this historical preservation makes Tlalpan Center, like Villa Coyoacán, popular with visitors, especially on weekends as people come to enjoy the tranquility of the main square/garden, eat in its restaurants and cafes and walk its narrow, tree-lined cobblestone streets enjoying the atmosphere of its handsome colonial-era homes.

Tlalpan Center has eighty structures from the 16th to the 20th centuries that have been classified by the National Institute of Archaeology and History (INAH) as having historic value. The borough of Tlalpan has sought World Heritage Site status for the area because of these structures, the area’s history and the nearby archaeological site of Cuicuilco. Wikipedia

Tlalpan lost its indigenous identity early on, certainly by 1645, when wealthy Spaniards took possession of the village and built the elegant, Spanish Colonial homes that give the village its present charm and attraction. So we did not know what to expect in attending its patron saint fiesta in August honoring St. Agustín. The village certainly retains a physical connection with its indigenous past. More specifically, it retains a connection with that epoch of radical transition during the 16th and 17th centuries that historians have dubbed the Spiritual Conquest, when Spanish monks entered indigenous villages to seek to convert their residents from their traditional culture and system of beliefs to those of Catholic Spain.

Tlalpan's physical connection with its indigenous origins is the same as that retained by every other indigenous pueblo in Mexico, namely, a church built by members of the Catholic religious order that arrived in the 16th century to carry out their mission of transformation. In Tlalpan Centro, it is the church of San Agustín that still stands, as did a predecessor, at one side of the colonial-era plaza. And the parish still celebrates the ritual marker of that transition of cultures, the feast day of the patron saint assigned to it nearly five hundred years ago, in this case, San Agustín, whose feast day is, as it has been over all those centuries, August 28.

So although we have been to Tlalpan Centro many times to enjoy its Spanish Colonial tranquility and dine outdoors at one of its excellent restaurants, this past August we returned specifically for the Fiesta de San Agustín. Given Tlalpan Centro's other early conversion from indigenous village to a Spanish Villa and its present role as a tranquil, picturesque retreat for city residents and tourists from the modern metropolis that has engulfed it, we were dubious about how much of the ancient connections would be represented in this fiesta.

We arrive at the plaza just as the procession of San Agustín through the streets is returning to the church. Saint Augustin was one of the earliest Christian theologians (364-430 CE).


We had read on the announcement of fiesta events that chinelos — the dancers "disguised" in Moorish-like robes and wearing masks that we have seen at many fiestas — will be accompanying the procession. We always enjoy the inventiveness and colorfulness of their costumes and the ánimo, spirit, of their jumping and spinning. But we are not at all prepared for what then appears. 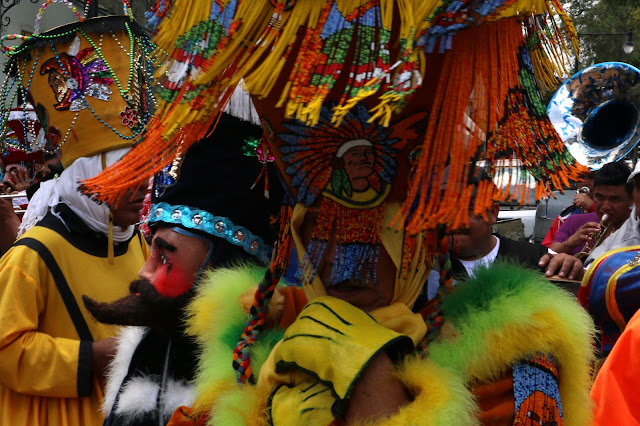 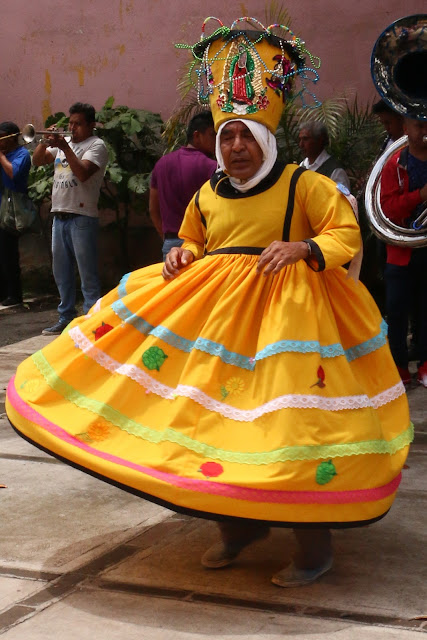 
The procession and the chinelos enter the church cloister and, from there, through a side door into the church sanctuary to celebrate the Mass for San Agustín

We leave the church and return to the plaza and its tranquility. Here we can reflect on how, once again in our ambles to traditional indigenous villages in Mexico City — even here, in a pueblo that was quickly transformed into a village in Spain —we have encountered that unique mixture, that syncretism of Mesoamerican indigenous and European Spanish Catholic culture and belief that makes the soul of Mexico what it so uniquely is. Here, today, we have met Quetzalcoatl and the Jaguar God, celebrated together with Saint Augustin and, of course, that indispensable bond between two such different worlds, Mexico's own Lady of Guadalupe.

Posted by Reed Brundage at 12:57 PM No comments: