Welcome to Mexico City Ambles! Here we seek to present "el imaginario", a vision of the city as embodied in its cityscape, public art and neighborhoods (pueblos and coloinas). As we have sought to cover the physical and historical breadth and depth of the City, this has led us to focus on the life of its lesser-known, working-class neighborhoods, many of which were indigenous pueblos existing long before the Spanish arrived and took over 500 years ago. We visit these original pueblos when they are celebrating their traditional fiestas, which are lively, colorful celebrations of their centuries-long communal continuity and unique identity.

Organization of the Blog


Each post appears in the blog chronologically by publication date. Scrolling down takes you to the most recently published post. Most posts, however, are related thematically or geographically. So, as a navigation aid, we have created individual PAGES (left-hand column) which organize posts according to major aspects of the city or themes in its history. These pages provide short descriptions of and links to posts grouped by theme or geography.


I. Making Sense of Mexico City: The first four pages acquaint you with Mexico City's organization (it does have one, despite its parent chaotic appearance). 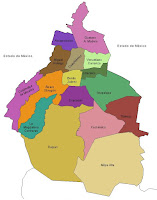 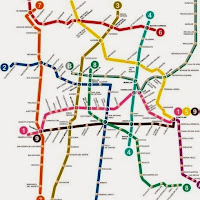 II. Mexico City's Natural Environment: The next set of pages acquaint you with the city's special natural environment: its year-round temperate, sunny climate, its history as a valley filled with large lakes, its spectacular geological setting in the midst of a circle of large, mostly dormant volcanoes, and its smaller, but historically important volcanoes within the city, and

Over the centuries, the lakes have been almost totally erased since the Spanish began draining them in the 17th century to prevent the annual flooding of Mexico City during the summer rainy season, so the islands eventually became part of the mainland. We have been searching out these "lost" islands, which are still-existing pueblo neighborhoods within the city. Here we introduce the ones we have visited and the history of the changes they have undergone from islands to urban neighborhoods.


Subsequently, a "castle", actually a palace, was built by a viceroy (ruling representative of the king of Spain) at the top of its landmark hill, an ancient ash cone volcano. After Independence was won from Spain in 1821, it served as the Mexican Military Academy and, in 1847, it was the scene of the last battle in the U.S. invasion of Mexico (aka Mexican-American War). In 1864, Emperor Maximilian I, put in place by Napoleon III of France at the request of Mexican conservative forces, decided to make it his palace. To connect it with the City Center, he had a boulevard built and named after his wife the Belgian Princess Carlotta. After his overthrow by liberal reform forces led by Benito Juárez in 1867. it became Paseo de la Reforma.

In Mexico City, the Coronavirus Is Bringing Back Thousand-Year-Old Indigenous ‘Floating Gardens’

Business is booming for farmers who plant on man-made islands

In the south of Mexico City, about 100 miles of murky canals wind their way through the Xochimilco alcaldía (borough).

Here, the urban sprawl of one of the world’s densest cities yields to a lake region where indigenous farmers have been cultivating a unique system of floating gardens for over one thousand years. Called chinampas, these floating gardens were built by the Xochimilcas to feed a growing population.

MCA Note: Around 900 CE, the Xochimilca people, considered one of earliest of the seven Nahuatl-speaking tribes to migrate into the Valley of Mexico, settled on the south shore of the lake that would come to bear their name. It was the southernmost lake, along with Lake Chalco, of the five lakes nearly filling the valley. Their first chief was Acatonallo, who is credited with inventing the chinampa system, which greatly increased crop productivity. These chinampas eventually became the main producer of crops of corn, beans, tomatoes, chili peppers and squash in the Valley of Anáhuac.

The altepetl, city state, of Xochimilco was founded in 919 CE. Over time, the city came to dominate other areas on the south side of the lake and across the mountains to the south, in what is now the State of Morelos. In 1352, the tlatoani, "speaker", Caxtoltzin moved the city from the mainland to the island of Tlilan.

In 1376, the Mexica (aka "Aztecs") who had established their city of Tenochtitlán in 1325 on a group of islands in Lake Texcoco, attacked Xochimilco, forcing the city to appeal for help from Azcapotzalco, the Tepaneca power on the west side of Lake Texcoco. The attack was unsuccessful, but Xochimilco then became a tributary of Azcapotzalco.

The Mexica finally conquered Azcapotzalco in 1428 and conquered Xochimilco in 1430. Shortly thereafter, the Mexica huey tlatoani, "chief speaker", Itzcoatl built a causeway south across the lake to Coyoacán on the southwest bank and Culhuacán on the Iztapalapa Peninsula which separated Lake Texcoco from Lake Xochimilco. This also create a land route from the island of Tenochtitlán to Xochimilco via Coyoacán. At that time, Xochimilco became a major supplier of produce to Tenochtitlán.

When Hernán Cortés led his Spanish soldiers and indigenous allies into the Valley in 1521, after being driven out in June 1520, the Mexica rulers of Xochimilco resisted. So, Cortés decided to attack the city before his final assault on Tenochtitlan. Using indigenous allies, he attacked on April 16, 1521. Although Cuautémoc, the last Mexica tlatoani, sent ten thousand warriors by land and two thousand by canoe to defend the city, the Mexicas and Xochimilcoans were defeated.

Subsequently, Mexico City was built on top of the ruins of Tenochtitlán. The Spanish then undertook a massive project of draining Lake Texcoco to prevent flooding of their island city, but to keep a route for continued water transport of produce from Xochimilco to Mexico City, they created a canal, called the Royal Canal. After Mexican independence in 1521, it became the National Canal. It remained in use until trucks replaced canoes in the 1920s. Wikipedia

Xochimilco became one of the city’s main sources of food, but rapid urbanization in the 1900s meant less land available for farming.

In 1985, when an earthquake struck Mexico City, many chinampas were abandoned as people who had lost their homes built shanty towns on them. Today, only an estimated 20 percent of the approximately 5,000 acres of chinampas are in use, and only 3 percent are used for farming.

But since the COVID-19 pandemic hit Mexico, interrupting the industrial food supply in important ways, small farmers have increased production and rehabilitated abandoned chinampas to fill the demand for fresh, local food.


Raúl Mondragón says on a Zoom call from his home in Mexico City:

“We’re talking about something that’s 1,000 years old. We have to preserve this.”

Mondragón has been recuperating chinampas since 2016, when he founded Colectivo Ahuejote. Now the virus is revealing the strength of this model in the midst of a crisis.

The revival of chinampa farming is due, in part, to pandemic-related problems at Mexico City’s main market, La Central de Abastos, the largest of its kind in Latin America.

Some warehouses have closed, truck traffic has been limited, and people have been getting sick with the virus. The supply chain of producers from around the country has also had to contend with road closures that limited deliveries to the capital and raised prices.


While the market is an enclosed and often crowded environment, small farmers can deliver their crops to the consumer directly, using a model similar to Community Supported Agriculture [CSA].

At a time when people are worried about the risk of shopping at a crowded market or grocery store, buying directly from a chinampero, parked with his truck at an outdoor pickup point in their neighborhood, is one way of limiting exposure.

Quarantine has also given many Mexicans more time to cook, Mondragón points out, and they are taking a greater interest in where their food comes from.

He cites a friend who now not only knows what a leek is but also how to cook it. His “very capitalistic” sister has started compulsively composting.


Mondragón grew up in Xochimilco, eating produce from the chinampas that his family bought at a local market.

Now he works on the 16,000-square-foot chinampa that Colectivo Ahuejote uses for growing crops, teaching, and experimenting with new techniques.

The collective operates as an NGO to develop cooperation among farmers, and they’ve also started a for-profit business to sell produce.

Their goal is to rehabilitate abandoned chinampas to promote sustainable agriculture and the country’s agricultural heritage.

The pandemic halted the collective’s workshops and training activities, but the commercial side of the business has been flourishing.

Between February and May, small farmers who are part of the collective have increased sales by 100 to 120 percent, according to Mondragón. Networks that have been years in the making are now becoming a bigger part of the city’s food supply.


This is a welcome change for farmers who have other jobs to support themselves.

Chinampero Pedro Capultitla used to have two or three extra jobs, but he was able to quit one recently to spend more time farming.

The word chinampa comes from the Nahuatl chinámitl, meaning a hedge or fence made out of reeds.

Mud from the bottom of the canal as well as lake vegetation are piled into this fencing until they reach the surface, creating a fertile and well-irrigated place for crops to grow. These favorable conditions make the chinampas one of the most productive types of agriculture in the world, enabling as many as seven harvests per year.

A variety of produce flourishes here:


greens, herbs, flowers, fruits, and milpa — a combination of corn, beans, and squash also grown by Native American farmers in the United States, who call this collection the three sisters.

Chinampero Pedro Méndez Rosas has been farming his whole life, and in that time, he’s seen generations of farmers leave to find work in the city.

“They go in search of more money, or a more elegant life,” he says on a phone call after a day spent mostly harvesting squash.

“But I’ve always preferred to be in the field.”


Méndez Rosas farms the same chinampas as his father and grandfather, and he eats the food he grows there, only buying products like grains and meat.

Since COVID-19, Méndez Rosas has seen the demand for leafy greens go up.

As the orders he normally fills from restaurants and chefs have been put on hold, he is now primarily selling products to individuals and families. The quick changes to business can be challenging, but Méndez Rosas has never been in it for the money.

“Being a chinampero is a vocation,” Méndez Rosas says.

These floating gardens have been feeding the city for a millennium, in times of sickness and in times of health, and this pandemic has made it clear that they are poised to keep sustaining the city in the future.

*Amanda Gokee is a Jewish/Ojibwe writer interested in food systems, food sovereignty, and the connection between plants, people, and places.
Posted by Jane Brundage at 12:33 PM No comments: