“I Speak of the City,
A novelty today, tomorrow a ruin from the past, buried and resurrected every day,
lived together in streets, plazas, taxis, movie houses, theaters, bars, hotels, pigeon coops and catacombs, . . .

The city that dreams us all, that all of us build and unbuild and rebuild as we dream,  . . .
I speak of the buildings of stone and marble, of cement, glass and steel, of the people in the lobbies and doorways,
I speak of our public history, and of our secret history, yours and mine.

Octavio Paz's prose poem portrays with words how the buildings and streets of any city reflect the urban human condition. But each does so embodying the historical and cultural character, el imaginario, the collective imagination, that makes it unique. Octavio Paz's city was Mexico City. This blog of ambles through the streets and neighborhoods of his city is our effort to make it ours. 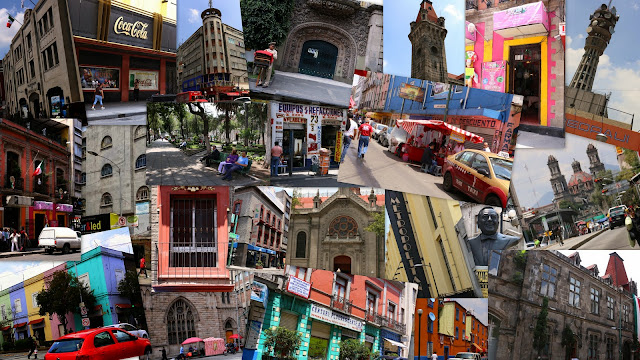 Your first experience of Mexico City, as you walk through its many colonias, or neighborhoods, especially those in and around Centro, is of an architectural hodge-podge, an incoherent batiburrillo, a jumble of buildings from various eras. Structures from the colonial period, adapted to contemporary uses, are enmeshed with newer neighbors from the 19th and 20th centuries.

The effect of this temporal-spatial desorden can be rather disorienting. You seem to be in no particular place or time—or in several simultaneously. It's as though you've entered a kind of time-warp that the chilangos, city residents, around you seem either not to have noticed or are not disturbed by. They go about their daily life, with its predictable actions and rhythms of working and relaxing, selling and buying, and, frequently, eating.

So what to make of this hodgepodge of eras, these fragments of disconnected history, this batiburrillo? We are used to thinking of Mexican history in archeological terms, as a sequence of horizontal layers built one atop another, as the Historic Center sits atop the remains of the Mexica/Azteca Tenochtitlán.

Aha! One sunny afternoon, in the midst of one of our ambles with Alejandro, our chilango scout, guide and mentor, sitting in a quiet plaza, puzzling over this confusion, suddenly, the pieces fell into place. Like pieces of colored glass forming a pattern in a kaleidoscope, the layers aren't piled one atop another, but lie side by side. Mexico City is a horizontal archeological site! The batiburrillo is the jumble of artifacts that would be found in any archeological "dig", but no physical digging is necessary here.

Recently, we came across a quote by Carlos Fuentes, the famed Mexican novelist and essayist, that confirmed our perception:

"Old cities are living and breathing entities, where the future is built not only atop the past, but also beside it. Mexico City, like Rome, is a layered city, where past civilizations coexist with one another." quoted in the New York Times, Sept. 8, 2005, in an article on Mexico City architectural issues as exemplified in the Paseo de la Reforma.

So all you have to do is walk around and keep your eyes open. The only "digging" comes afterward, researching the histories of various pieces encountered. And for that, now there's the Internet! So the "digging" is fun, relaxed armchair exploration after an intriguing amble.

Mexico City Ambles is our presentation of this archeological-historical exploration-in-progress.