Early on in our ambles around Mexico City, when we began asking ourselves what sense might be made of its battiburillo, hodgepodge, of styles, we noticed some buildings that stood out for their ornate style in contrast to their often undistinguished surroundings. Fanciful combinations of richly framed, often arched windows and doorways and a peculiar style of column (spirals instead of Neoclassic Greek), the buildings were neither Spanish Colonial nor Neoclassic, but nor were they yet modern. They appeared to be from the first half of the 20th century.


As we undertook a more systematic exploration of the colonias, neighborhoods, begun at the end of the Porfiriato (1876-1911) and, particularly, those developed mostly after the Mexican Revolution (1910-1920), we encountered many more of these edifices, obviously homes of the upper-middle class. With some exploration in Wikipedia, we learned that they are Spanish Colonial Revival or, more specifically, California Colonial.


But where did this style come from, in particular, these non-Classic, even counter-Classic spiral columns? With further investigation via our faithful Wikipedia, we found their history goes back more than a millenia and a half.

In the 4th century, Constantine the Great, the first self-proclaimed Christian emperor, brought back to Rome a set of columns from the Eastern part of the Roman Empire. The columns were to be used in construction of the original St. Peter's Basilica.

According to tradition, these columns came from the "Temple of Solomon", even though Solomon's Temple, the First Jewish Temple, built in the 10th century BCE, was destroyed in 586 BCE, and the Second Temple was destroyed by the Romans in 70 CE.

Constantine is recorded as having brought the columns back from Greece. Documented as cut from Greek marble, they are thought to have been made in the 2nd century CE. Nonetheless, they became known as "Solomonic".

When Gian Lorenzo Bernini was commissioned by Pope Urban VIII in 1629 to complete the interior of St. Peter's, he chose the ancient Solomonic columns as his model for the colossal bronze Baldacchino, which was finished in 1633 (Wikipedia). With their dynamic twists, they, in turn, became the models for other Baroque architecture, including in Catholic Spain.

Near the end of the 17th century, Spanish Baroque architecture developed a particularly elaborate sculpted ornamentation that remained in vogue until about 1750, when it was replaced by the Neoclassic style. Spanish Baroque is marked by extremely expressive, florid decorative detailing, normally found above the entrance on a building's main facade.  It is also called Churrigueresque, derived from the name of architect and sculptor José Benito de Churriguera (1665–1725), who championed it. Born in Madrid, De Churriguera worked primarily in Madrid and Salamanca (Wikipedia).

The style spread from Spain to the Spanish colonies in the Americas, where the salomónica column was often used in churches as a key element of the Churrigueresque style.


At this point, my mental light bulb went on.
I had seen these spiral columns before, in the city of Puebla, famous for its Baroque epoch churches.


This led me to wonder whether any churches with salomónica columns existed among Mexico City's innumerable Spanish Colonial churches. I couldn't recall any, but then, I have to admit, Baroque churches are not exactly to my taste. Nevertheless, I didn't have to look far.

Right next door, on the main facade of the Cathedral itself.....

In the latter part of the 18th century, the Baroque style was replaced by the straightforward lines of Neoclassicism. With its models in classic Greek and Roman architecture, Neoclassicism is seen to typify the Enlightenment value of reason over emotion. Two sections of the southern, main facade of Mexico City's Metropolitan Cathedral—constructed half a century apart—exemplify this shift: the Churrigueresque Tabernacle and Neoclassic main facade.

Manuel Tolsá, a Spanish architect who came to Mexico in the latter part of the 18th century, embodied this transition. In addition to completing the front of the Metropolitan Cathedral, he designed many Neoclassic buildings right up to the time of the Mexican War for Independence (1810-20). Neoclassicism continued to be the dominant architectural aesthetic in Mexico through the 19th century. Moreover, as we have seen in the public buildings and homes of the wealthy during the Porfiriato, it continued into the early 20th century.

So we ask ourselves: how did a more elaborate Baroque flavor, with non-"classic" elements, including Solomonic columns originating in the eastern Mediterranean nearly 2,000 years ago, reassert itself in the early 20th century and end up back in Mexico City?

Romanticism and Return of the Dramatic

In the 19th century, the Romantic Movement arose in reaction to the aristocratic, social and political norms of the Age of Enlightenment: scientific rationalism and Neoclassic aesthetics.  In tandem with this reaction, cultural and artistic interests in pre-Enlightenment and exotic non-European cultures also developed and produced a host of revivals, including of the Gothic and Moorish. This shift occurred both in the Americas and in Europe. Porfirio Díaz's Palacio de Correos, Post Office Palace, is a striking example of this, with its amalgam of Plateresque, Gothic, Renaissance and Moorish Revival elements. 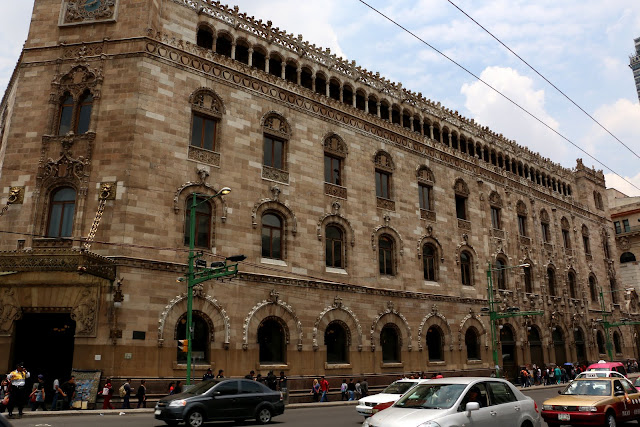 Mexico's Moorish Pavilion for the New Orleans and St. Louis Expositions is another example. 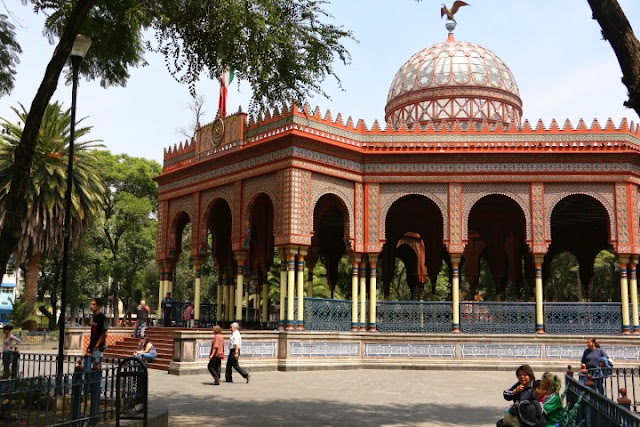 Near the end of the 19th century, in Florida and California, with their Spanish heritages and warm climates, architectural revivals developed that reflected their history. In Florida, hotels for winter visitors were built in what was known as Mediterranean Revival style. In parallel, Mission Revival, based on California's original Franciscan missions, also developed.

This aesthetic current coincided with the Spanish-American War (1898), which led to Cuba becoming a de facto U.S. protectorate, and construction of the Panama Canal (1904-1914). Both events brought increased U.S. interest and involvement in Latin America. The Canal's impending opening led the two formerly Spanish/Mexican cities of San Diego and San Francisco to decide to hold Expositions of the type popular in that era. Both cities saw great economic opportunities in connecting the Atlantic and Pacific Oceans for ocean trade.

San Francisco,with a population nearly ten times larger than its southern sister, was ultimately supported by politicians in California and Washington, D.C., and it ended up hosting the official Panama–Pacific International Exposition. Nevertheless, San Diego leaders decided to forge ahead with their own Panama-California Exposition. Thus, it is not surprising that its architects, Bertram Goodhue, and his partner, Carleton Winslow, both from New York, decided on a design based on ornate Spanish and Mexican Baroque Churrigueresque decoration, with influences from Moorish Revival architecture.

Goodhue had already experimented with Spanish Baroque in Havana and in Panama. Among his specific stylistic sources for the San Diego Exposition were the Mexico City Metropolitan Cathedral and the Cathedral of Our Lady of the Assumption in Oaxaca. Goodhue's and Winslow's designs combine Baroque ornateness with plain, calming stucco walls. They included Solomonic columns.

We don't know who brought the style, now known as California Colonial, back to Mexico City after the Revolution. Perhaps it was even a U.S. architect, like Lewis Lamm of Roma Norte fame, or one of the architects involved in the U.S.-owned Mexico City Improvement Company that developed what was named Colonia Americana (now Colonia Benito Juárez). Be that as it may, the California version of Spanish Colonial Revival, with its salomónica columns, is alive and well in Mexico City.

Posted by Reed Brundage at 7:50 PM No comments:

Colonia Condesa and Its Sisters - From Past to Present, Part II: 20th Century Kaleidoscope

Our first Colonia Condesa post identified Parque España and Parque México as the "hearts" of Colonia Condesa and its sister neighborhoods—Roma Norte, Hipódromo (Racetrack) and Condesa Hipódromo. We also explored the "bones" of some of these neighborhoods—the shaded, inviting avenues of Oaxaca, Durango and Mazatlán that run around their northern and western sides.

Now we head back to their center, Parque México, in Colonia Hipódromo. When the Colonial hacienda was subdivided at the beginning of the 20th century, the Mexico Jockey Club built a racetrack here. It was closed in the 1920's, and the area was subdivided for homes, but the oval groundplan was preserved in the shape of Parque México and Avenida Amsterdam that circles it one block away.


This egg-shaped enclosure creates the unique feeling of an embracing, inward-focused space set apart from the city's surrounding bullicio, hubbub.

Within this space, chilangos, Mexico City residents, come to relax and play. 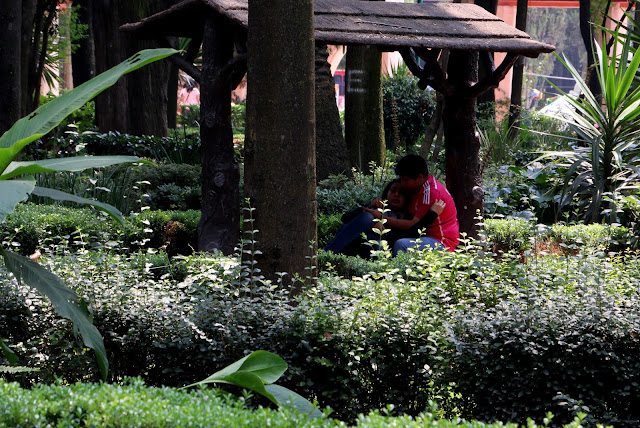 On Avenida México, which borders the park, we see some familiar architectural friends.


But we also encounter a strikingly different esthetic.


The presence of Art Deco buildings marks a clear transition to a post-Revolution, modern era that sought to leave behind a conservative past with its Neoclassic and Spanish Colonial Revival tastes.

Walking one short block outward from the Parque brings us to Avenida Amsterdam and other echos and transformations of the eras encapsulated in the last century. 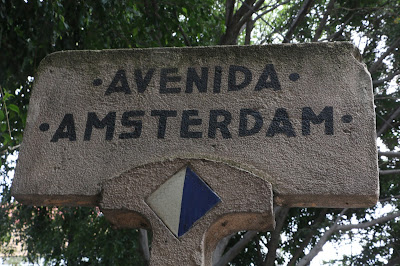 
Avenida Amsterdam follows the original racetrack. Running along its center is a camellón, meridian, full of trees and tropical plants that turn this oval street into its own park, a circular boulevard that absolutely beckons you to stroll along it. 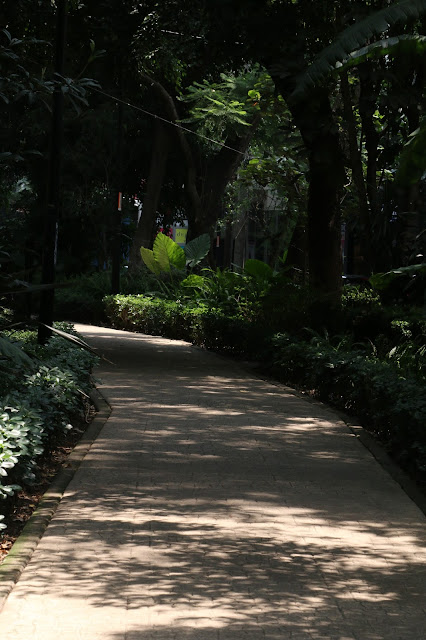 As we saunter along this path, we are struck by the constantly changing, three-dimensional kaleidoscope of 20th century esthetics opening around us. 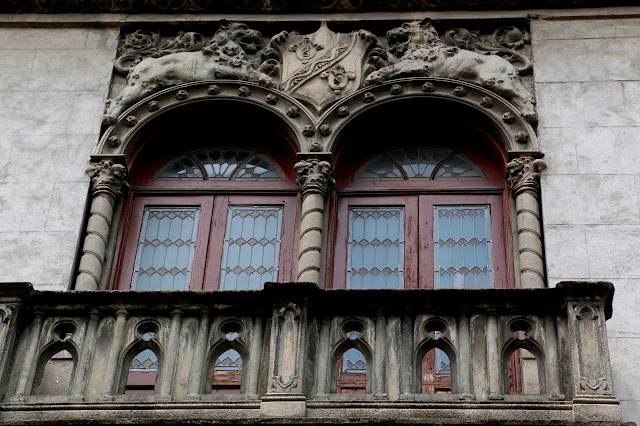 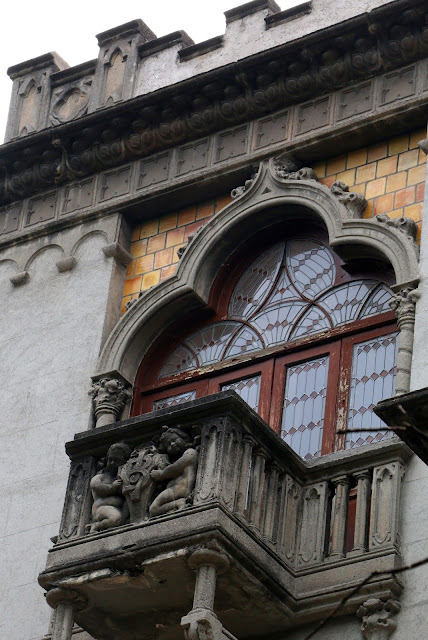 It's time to take a rest after this meander through the architectural kaleidoscope.

The perfect retreat is Popocatépetl Plaza, between the north ends of Parque México and Avenida Amsterdam, where we enjoy its Moorish Revival pavilion.

Here we end our ambles through the various colonias founded at the end of the Porfirato. Encompassing more than a hundred years of architectural styles, these rambles have enabled us to witness the evolution of upper-class Mexican tastes across the entire 20th century—the shift from emulating 19th century European esthetics to embracing the International style of 21st century global culture.

In terms of Mexican history, we have passed from the reign of Porfirio Díaz to the post-Revolution period. Our next explorations focus on seeking out how the Mexican Revolution (1910-1920) was expressed in the architecture and public art of Mexico City.

Posted by Reed Brundage at 2:11 PM No comments: