Pueblos in the Mountains


We have been to other originally indigenous pueblos in Álvaro Obregón: San Sebastián Axotla, which maintains its indigenous roots, and San Ángel and Chimalistac,which were taken over early in the Colonial Period by wealthy Spanish for haciendas (estates) and country homes. However, they lie near the northeastern end of the delegación, literally on the border with Coyoacán and are now immersed in the modern city. In striking contrast, San Bartolo, like the other pueblos in the Sierra de las Cruces, lies well to the south, high in the mountains, surrounded by evergreen forests.

Traveling with our faithful taxista, Sr. Sánchez, on the Sunday morning of the Fiesta de San Bartolomé, we quickly leave our familiar Coyoacán and enter Delegación/Alcaldá Álvaro Obregón. For some distance, we are still on the flat Valley floor and in the midst of the urban, working-class, commercial city. Then we start to climb. As we do, the homes become more upscale, surrounded by walls and with gated entrances. There are entire gated communities and luxury sports clubs. Once again, we are amazed at how quickly one can transition from one world to another in the City, but we also wonder what Pueblo San Bartolo Ameyalco will be like, with all this luxury just below it.

Finally, after about an hour's ride, as we climb further and begin to enter the ancient forest of the mountainside, we see a sign pointing off the main road to the pueblo. As always, as soon as we enter its narrow streets, lined by modest cinderblock homes and stores, we know we are in a pueblo, not the modern city. Inevitably, because it is fiesta time, we come to the point where the street is closed off and, beyond that point, filled with temporary puestos, stalls, whose owners are preparing them to sell food or other items. And there are the carnival rides, sitting still and empty, awaiting the evening party time. So again, we thank Sr. Sánchez for bringing us so far and so reliably to our destination, pay and tip him well, and bid him "hasta luego", "until the next time".

Walking up the puesto-filled street we soon come to the walled entrance to the church atrio (atrium). So far, all is as it virtually always is for a pueblo's patron saint fiesta.

The Pueblo of Arrieros, Mule Drivers

Not seeing any schedule of events posted anywhere, we wander back into the street. There we encounter a traditional group of dancers whom, not long ago. we encountered for the first time in the city, while at a fiesta in Santa Ursula Xitla, in the southern Delegación of Tlalpan. They are a cuadrilla de arrieros, a team of mule drivers. We had encountered them again in Pueblo San Pedro Martir, also in Tlalpan, and most recently in San Lorenzo Acopilco in Cuajimalpa. They seem to be a phenomenon of the mountainous pueblos of the south and west of the city, evidently because, for centuries, the commercial trails leading into and out of the city had to cross these mountains. 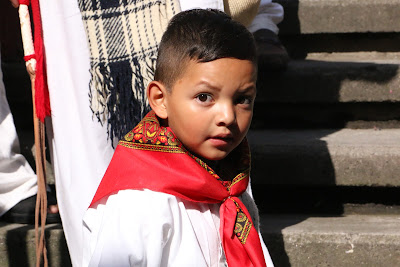 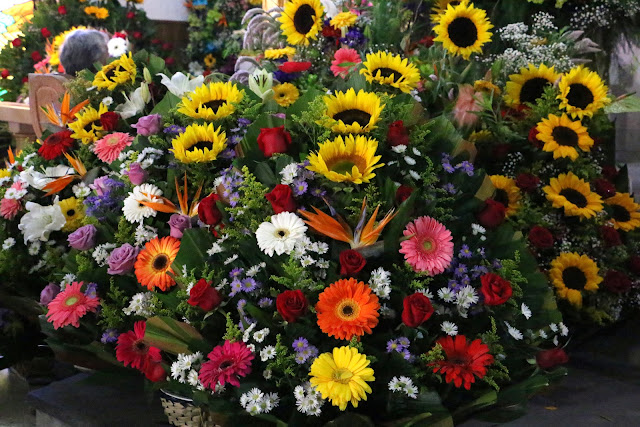 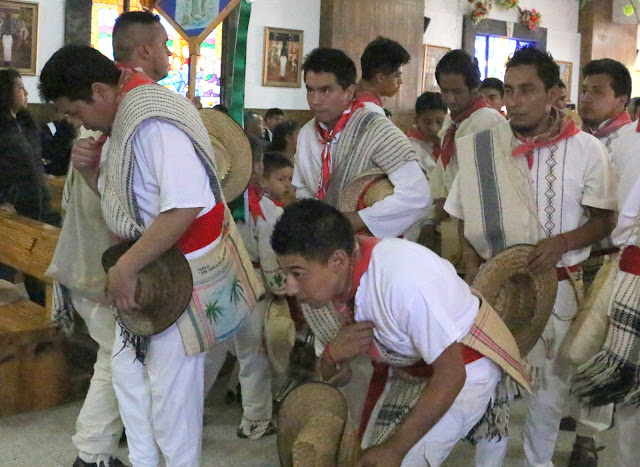 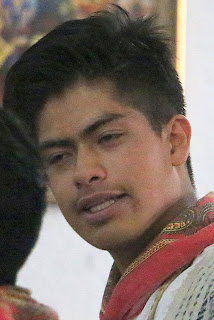 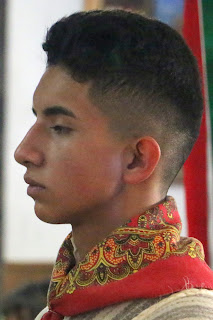 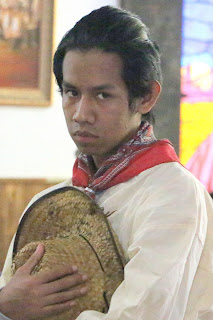 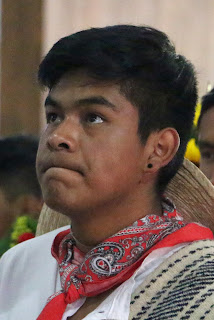 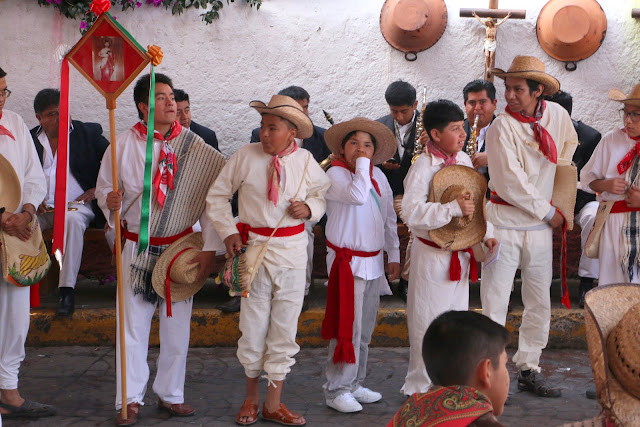 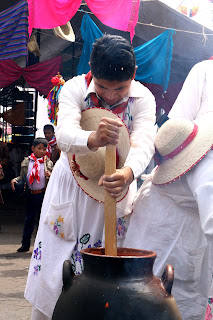 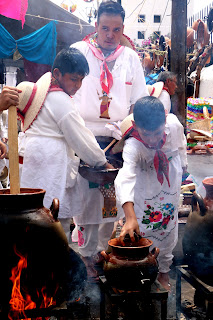 While we are watching the arrerios carry out their elaborate preparations to feed the community, we hear another banda begin to play in the atrio in front of the original chapel, so we hurry over to see what is happening. Fiestas are often "three-ring circuses", with multiple events happening simultaneously. 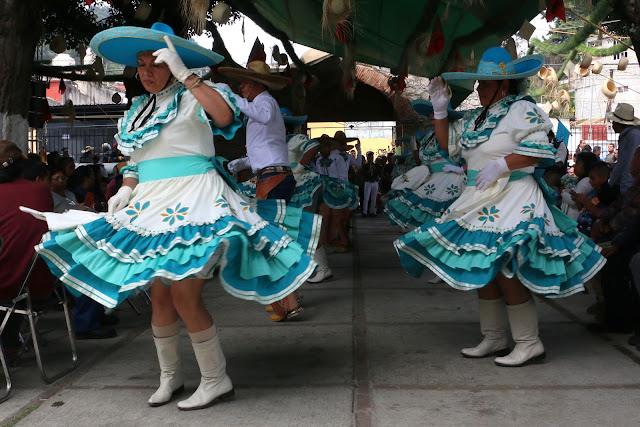 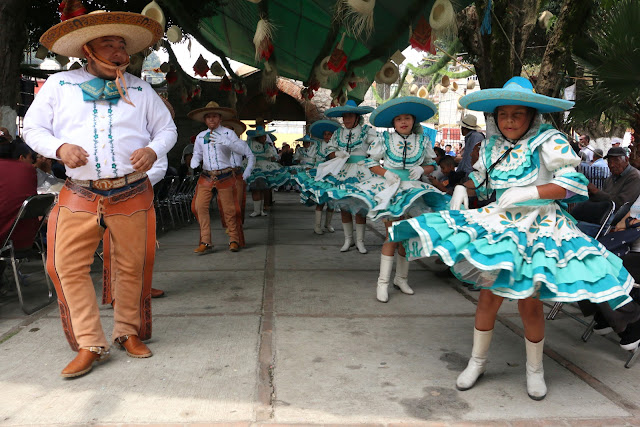 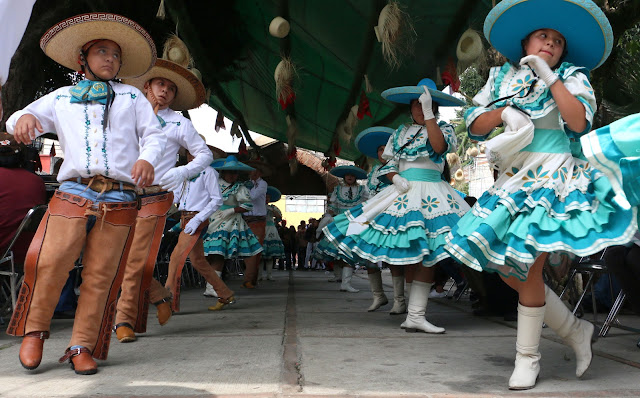 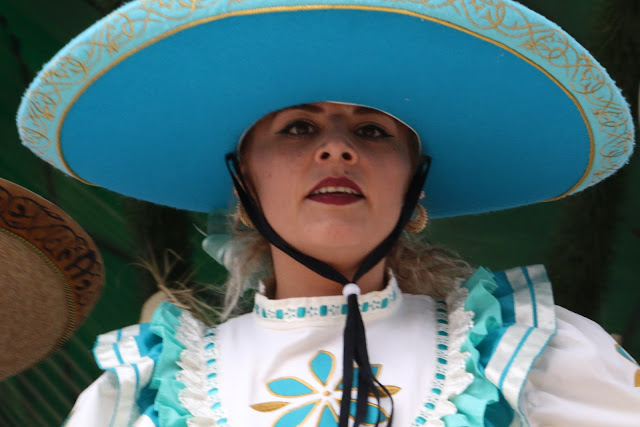 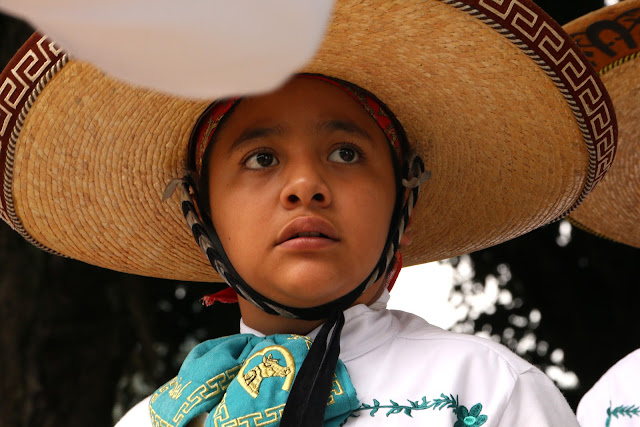 As always, we are as interested in capturing the faces of the people of the community as in the formal ceremonies. 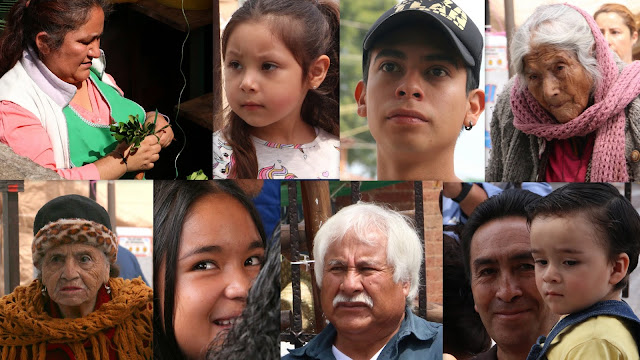 The Strength of Tradition

What has impressed us the most about the Fiesta del Pueblo San Bartolo Ameyalco, here in the wooded mountains that surround the modern City, is the strength of their tradition of arrieros. As we noted in introducing them, we have recently encountered them in some pueblos in other southern delegaciones/alcaldías, but not in these numbers, nor with such elaborately embroidered trajes traditionales, traditional dress.

Above all, while we saw the ritual of preparation of some food for the community in San Lorenzo Acopilco in Cuajimalpa, we did not realize how central it is to the arrieros tradition, as evidenced by the extensive preparation of food as we have seen today. It was quite a production of multiple foods, obviously well-organized and carried out with deliberation and pride by the members. The group also included a large number of children and youth, incorporating them fully, thus teaching them all the components of the tradition so that they could maintain it intact into the next generation.

All of these qualities bespeak the community's deep commitment to and pride in reenacting and thereby commemorating the significant role that arrieros played for four hundred years after the Conquest in providing the only means of commercial transport into and out of the capital city. Hence, they were essential both to the life of those living in the city and surrounding villages and, on a global scale, to Spain's international commerce between Asia and the mother country via Nueva España.

Posted by Reed Brundage at 8:10 PM No comments: