Mexican Muralists in the Metro: Clash and Synthesis of Civilizations in Copilco Station

Opposite Sides of the Tracks

In the Tacubaya Metro Station, we saw the murals of Guillermo Ceniceros, an apprentice of David Siqueiros, portraying the legend of how, some seven hundred years ago, the Mexícas (Me-SHE-kahs) came to arrive in what was then the Valley of Anáhuac, now the Valley of Mexico, and found a city, México-Tenochtitlán. The murals introduced us to the atepetl, city-state's tlatoani, leaders, and some of its gods.

A few years later, in the early 1990s, the Metro System invited Ceniceros to create another set of murals, this time in Copilco Station on Line 3. This station is near the entrance to University City of the National Autonomous University (UNAM), which known for its own spectacular murals. Unlike the space in Tacubaya, where multiple corridors join to form a kind of multidimensional atrium experienced from many angles by travelers passing through it, the space in Copilco is formed by the two parallel train platforms and the walls enclosing them.

Ceniceros took advantage of the division of the tracks and the opposition of the parallel walls to present the story of the confrontation, clash and subsequent synthesis of the two civilizations that are the foundation of modern Mexico: the indigenous Mesoamerican and the European Spanish. 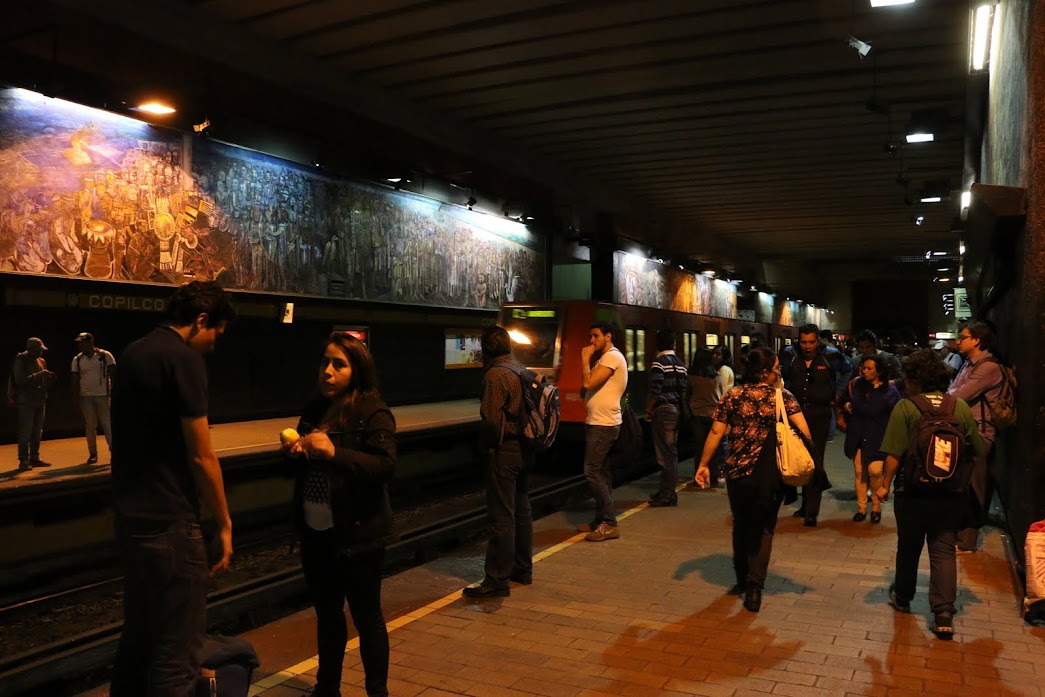 On the Mexica Side


In accounts dictated by Mexica and written down by Spaniards after the Spanish defeated the Azteca/Mexica in 1521, tales are told of a series of omens that had appeared in Tenochtitlan shortly before Cortés's fleet arrived off the Gulf Coast. Ceniceros paints these omens.


On the Spanish Side

The Spanish arrive from Cuba, possessing three weapons not available to the Mexicas:

Once ashore, Cortés used threats of destruction and offers of benefits from Emperor Charles V, representative of the "One True God" and "True Ruler of the World", to gain thousands of indigenous allies. Some had been forced to give tribute to the Mexica; others, such as the city-state of Tlaxcala east of Tenochtitlan, had been the object of the Mexica "Flower Wars" instigated to collect captives for sacrifice, so many were looking for an opportunity to do in their enemies.

Nothing is shown in the murals of the actual conflict between the two armies. Nor of its consequences.

Instead, Ceniceros presents us with a more universal perspective—one where exploration connects previously autochthonous, or original cultures (Mesoamerican and Spanish), expanding and enriching both in a New World with broader horizons.

From World History to World Art

Having set the historical context of the Age of Exploration and the encounter between "Western" and "New World" civilizations, Ceniceros then takes us to an even larger frame, the universality of art. To the right and left of each of the main, historical murals, he presents a series of reproductions of works of art from each of the two "worlds".

At each side of Cuauhtemoc and his people are murals portraying artistic works of the peoples of what are now the Americas:

Then, at one end of the "Mexican" platform, Ceniceros brings us back to a group we now consider old friends and to the very physical and temporal place where we began this series on Mexican muralism: Centro Histórico at the beginning of the Revolutionary 20th century. 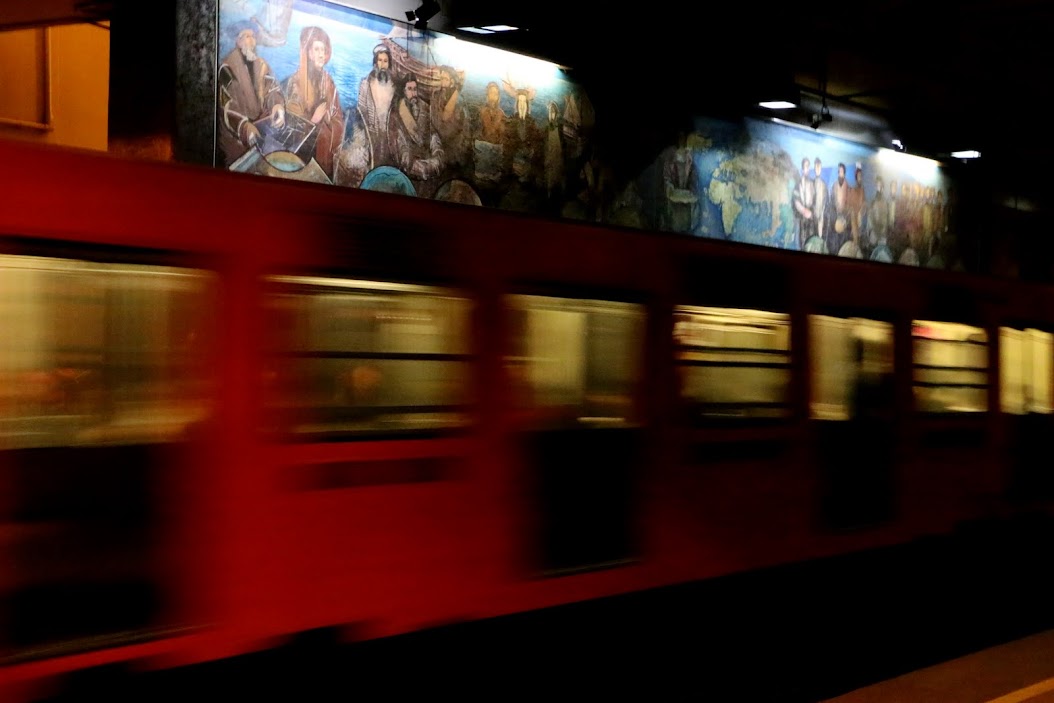 Thus, in Copilco Station, Ceniceros brings together "Old" and "New", Mesoamerican and European, past and present worlds. And this former New Yorker, who now ambles around Mexico City, feels right at home.

Posted by Reed Brundage at 11:40 AM No comments: