For the past several months we have been ambling through the streets of various colonias, neighborhoods, of Mexico City, exploring the manifestations of Mexican history in the city's architecture and public art. Most recently, we followed the trail of representations of the Mexican Revolution and its particular and stunning eruption in the artistic genius of the Mexican Mural Movement.

Along the way, by happenstance, we also encountered contemporary street art. It is ubiquitous in Mexico City, showing up, usually ephemerally, on almost any available blank wall. There is even a Facebook page dedicated to it, "Street Art Chilango."

We have been intrigued by its many styles and themes and wondered where it might fit into the story of the self-representations of the inhabitants of "the city that dreams us all, that all of us build and rebuild" ("I Speak of the City", Octavio Paz). As an unforeseen outcome of our study of the Muralists, we think we have found the connection.

Diego Rivera and José Clemente Orozco painted murals in indoor spaces, using the ancient technique of fresco, painting on wet plaster, but David Alfaro Siqueiros fiercely sought to break out of those spatial and material limitations. He dedicated his life to realizing a vision of murals created on outdoor walls in public spaces, using modern materials to portray political and social themes. He inaugurated the artistic use of synthetic paints that had been invented to cover the metal surfaces of automobiles, and he employed spray guns, image projectors and other modern tools to create large works delivering new experiences to those who passed by.

In coming to know Siqueiros and his mission, we have come to see a direct, if underground, link between his work and street art. With their use of aerosol paints on publicly visible walls, anonymous street artists could be said to be Siqueiros's offspring. There are, of course, more ancient progenitors. Mexicans have been painting cultural and political messages on walls in public spaces for millenia, as we wrote about in setting the context for Siqueiros's culminating work, the Siqueiros Cultural Polyforum.

Given its ubiquity, we know we will run into more street art as we walk the city's colonias. But perceiving its roots in the Mexican Mural movement—and with David Alfaro Siqueiros in particular—we offer here a sample of street art we have run across thus far (links connect to original posts on each colonia):

In Colonia Santa María la Ribera—in an intentional transition from formal murals to street art—a community art center has fostered art on the walls that face it from across the street: 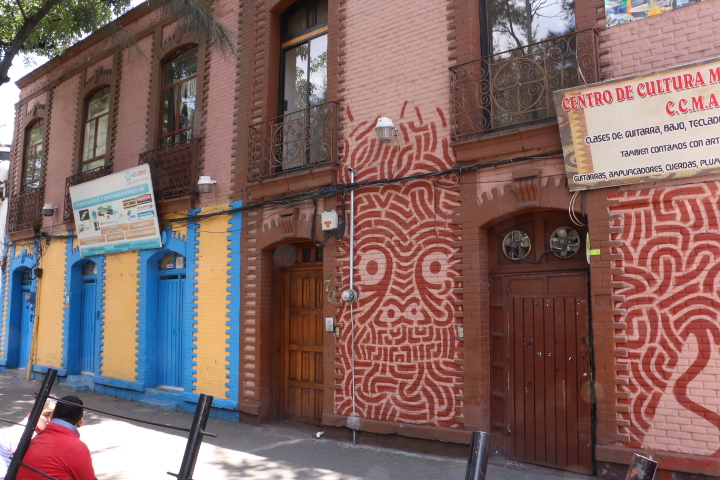 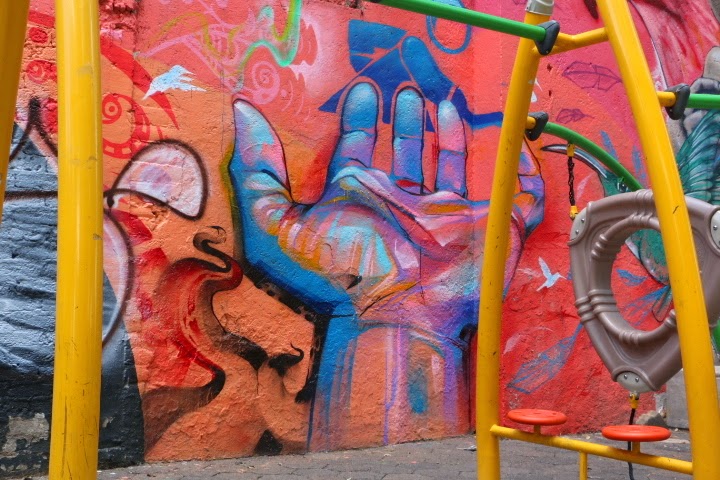 Where have we seen this hand before?

When the Spanish arrived, Aztacalco was an indigenous Nahua community on an island in Lake Texcoco. It kept its name and retained relative social and cultural autonomy until the beginning of the 20th century, when it was incorporated into the expanding Mexico City and subsumed as part of the new subdivision, La Roma. It became known as La Romita.

As a "popular", i.e., working class, indigenously-based barrio, it kept itself apart from the new La Roma of los de arriba (those from above). Lacking the means to express their dreams in stone or glass, residents—inspired by a local artist—have turned to another medium to express theirs. 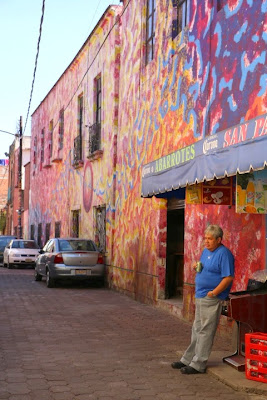 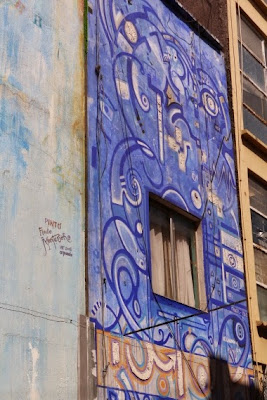 Using the featureless walls of their houses, they express themselves with paint. 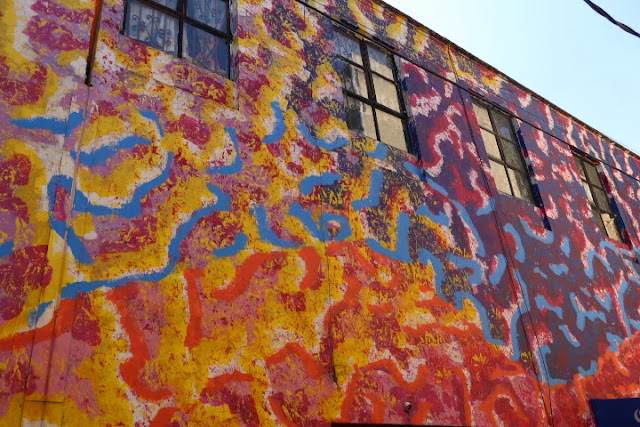 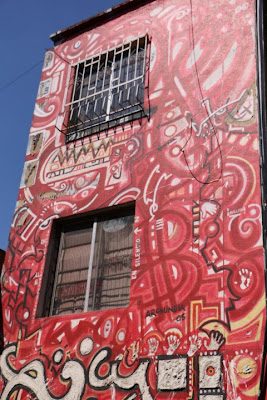 But there are also more individual and modern messages written on these walls:

And, in nearby Parque Pushkin (yes, named after the Russian author)

Villa Cortés and Nativítas are two small, adjoining colonias at the eastern edge of the Delegación, Borough, of Benito Juárez, south of Delegación Cuauhtémoc and Centro Historico. Benito Juárez is, overall, a middle and upper middle-class borough that has engulfed remnant "islands" of pre-Hispanic, indigenous villages. Initiated in the 1920s and 30s, after the Mexican Revolution, most construction in the borough took place after World War II, when Mexico City's middle classes began to expand at pace with the economic benefits of supplying the war and post-war needs of the United States.

Villa Cortés and Natívitas lie at the more modest end of that spectrum and east of the great dividing line of the Calzada de Tlalpan highway, where each has a station on Metro Line 2. They consist of simple but generally well-kept private homes built of bricks or cinder-block faced with concrete. Here every muro, wall, is kind of modernist, abstract mural, a study in color. 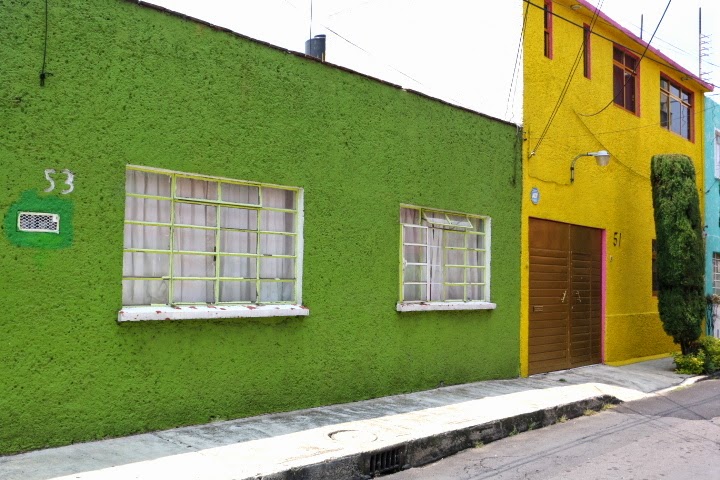 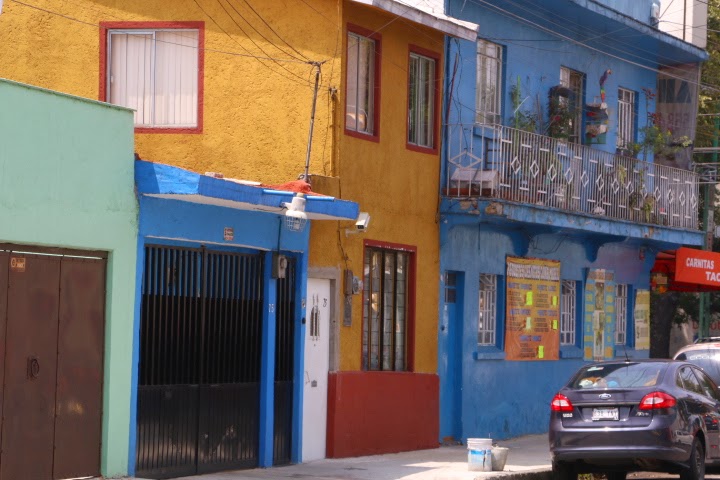 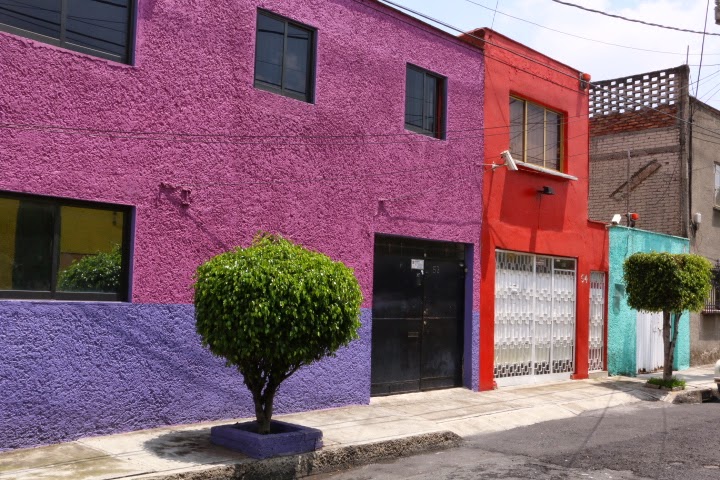 And here we come acoss street art, a mural, that is a cartoon-like dream of darkness and sunshine.

And this message about all murals, all art.

Posted by Reed Brundage at 5:14 PM