For the past few months, we've been following the trail across Mexico City of representations of the Mexican Revolution and its particular and stunning eruption in the artistic genius of the Mexican Mural Movement.

One day, our guide and mentor, Alejandro, led us to encounter a particularly spectacular display of murals on the Revolutionary theme. But these murals don't portray the Mexican Revolution, and the artist, though a son of the Mural Movement, is not a native son of Mexico.

In 1972 Mexican President Luis Echeverría invited Russian Jewish immigrant painter Vladimir "Vlady" Victorovich Kibalchich Rusakov to paint murals for the Miguel Lerdo de Tejada Library located in the former Oratory of San Felipe Neri, a 17th-century church in the Historic Center of Mexico City. Like the murals of José Clemente Orozco in San Ildefonso, the Vlady murals stand in strong counterpoint to the Baroque edifice that houses them.

Miguel Lerdo de Tejada was Secretary of Finance under Presidents Ignacio Comonfort (1855-1857) and Benito Juárez (1855-1872, five terms) during the Era of Reform. The Library, like the Museum of Art in the former Archbishop's Palace, is operated by the Secretariat of the Treasury and specializes in economics texts and old Mexican newspapers.


"Vlady", as he was known in Mexico, was born on June 15, 1920, in St. Petersburg. He was the son of Jewish writer and photographer Victor Napoleon Lvovich Kibalchich, better known as Victor Serge, and Liuba Rusakova. Vlady's grandfather, Leon Kibalchich, was an officer in the Imperial Guard who participated in the plot to assassinate Czar Alexander II.

Victor Serge was secretary to Leon Trotsky. As we wrote about in our history of David Alfaro Siqueiros, Stalin exiled Trotsky in October 1927. In 1936, Trotsky ended up in Mexico City, hosted by Diego Rivera and Frida Kahlo. In 1940, Siquerios, a Stalinist, led an unsuccessful attempt on Trotsky's life. Trotsky was assassinated in August of that year.

At the time of Trotsky's exile, Serge and his family were exiled to Kazakhstan. In 1933, the stress of their situation was too much for his wife, who succumbed to mental illness and was committed to the Red Army's psychiatric clinic. Serge was then sent to the gulag in Siberia. Vladamir, age 13, went with him.

In 1936 pressure from such writers and intellectuals as André Malraux resulted in the family being allowed to leave the Soviet Union. They ended up in France, where Vladamir had his first encounter with modern art and was inspired to become a painter. He studied with the painters Victor Brauner, Wifredo Lam, Joseph Lacasse, André Masson and Aristide Maillol.

In 1941, the imminent German invasion of France forced the family to flee again. They went to Marseilles to board a boat to leave Europe, but Vlady’s mother needed to be hospitalized again. Vlady and his father left for Martinique in the Caribbean, leaving Liuba Rusakova in a hospital in Aix-en-Provence, where she remained until her death in 1943.

From Martinique, father and son went first to the Dominican Republic then to Cuba. With help from former Mexican president Lázaro Cárdenas, who had previously granted exile to Trotsky, they were granted a visa to live in Mexico.

They arrived to Mexico in 1943 and settled in Mexico City. Although Vlady and his father were quickly accepted into the capital's artistic and intellectual circlestheir economic situation was precarious. Vlady had his first exhibition in 1945, but his father died days later. That same year, Vlady married a Mexican, Isabel Díaz Fabela. Two years later, he became a naturalized Mexican citizen. Wikipedia

The Miguel Lerdo de Tejada Library project covers 2,000 square meters (21,500 sq. ft.) and took eight years to complete. The work is divided into various panels and, unlike most Mexican mural work, does not limit itself to Mexican history but touches on various modern revolutions including the Russian, French, and American Revolutions, and even the “Freudian Revolution”—the 20th century sexual revolution.

The overall work is called “Las revoluciones y los elementos,” "The Revolutions and the Elements." Vlady first completed the “Freudian Revolution” in the chapel, which had served as a theater after the church was abandoned. This led to the chapel being renamed the Sala Freudiana. (At this writing, this sala, unfortunately, is closed for repairs.)

The entire work was inaugurated in 1982, with President José López Portillo in attendance.

Stepping over the threshold, from the bright sunshine of a spring day, past old, dark, wooden doors, we enter a small vestibule (narthex of the former church). To one side, a giant, abstract, multi-colored foot, Vlady's "The Step," catches our eye. The intensity of its colors and form immediately tell us we are about to experience something powerful.

On the opposite side, behind a reception desk, is an even stranger, amoeba-like composition. 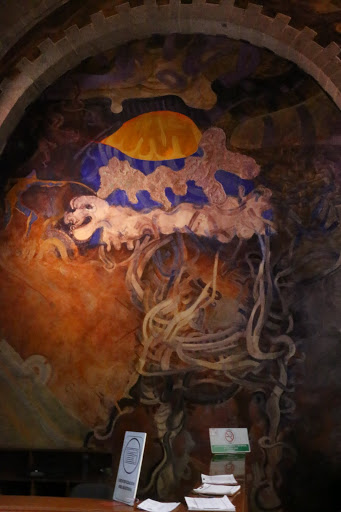 After signing in and checking our bag, we approach the doorway to the main room, the former nave. Glimpsing the large space filled with brightly colored murals, a mural painted to the side of the door almost escapes our notice. But knowing that apparently small details can contain important surprises, we stop to examine it. It takes several seconds to decipher the composition.


We are perplexed. What message is being foreshadowed here?

Revolutions On All Sides

Entering the main room, we are overwhelmed. Both the long sidewalls and the far endwall are completely covered with intensely colored, swirling forms. Three or four arched spaces on each side wall appear to contain specific, if dream-like, scenes. 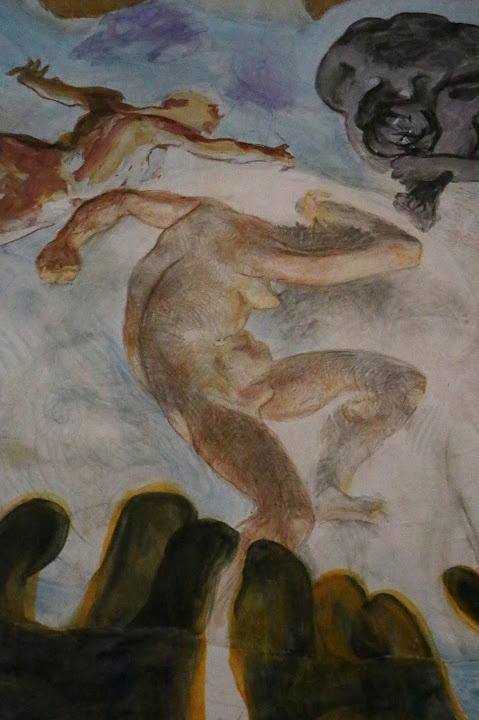 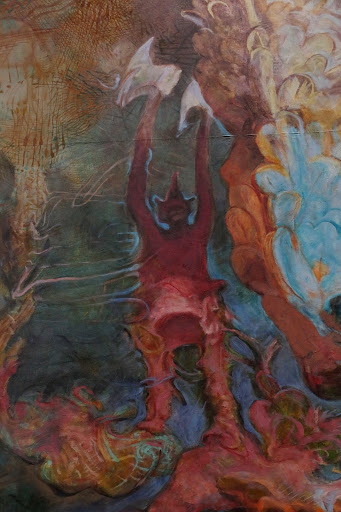 
Revolution as the Fall of Humankind

The triptych recalls Hieronymus Bosch's Last Judgment, with its tortured souls. But the Christian Trinity is no longer in the Heavens, receiving saved souls. Here, all seem condemned to fall into the abyss. Except, perhaps, the last figure breaking free of his demon.

The images are archetypical, even Biblical. In the Christian tradition, the Fallen Angel is Satan, who has dared to challenge the omnipotence of God. Jacob dreamt of angels ascending and descending a stairway between Heaven and Earth. In Greek mythology, Prometheus challenged the gods to bring fire to humankind.

For Vlady, all revolutions end in failure because all end in the arrogance of unchecked power.  As one who, with his father and mother, suffered from the Stalinist distortion of the Russian Revolution, his assessment is quite understandable. In this, Vlady reminds us of Orozco's realism—in stark contrast to Rivera's idealism in his "Ballad to the Revolution"—and Siqueiros's radicalism.

Did Vlady see any hope for mankind? Here, in this government-run library, he left, perhaps, two clues. One is the figure breaking free of the devil on his back. The other is more an image of the Enlightenment belief in individual liberation through learning and knowledge.

Vlady painted other murals in Culiacán, Sonora, and in Uruguay. His paintings have been exhibited in Europe, the United States and Canada, and he was awarded many prizes, including a Guggenheim Fellowship. He died on July 21, 2005, at the age of 85.

In 2004, Vlady donated most of his art collection, a total of 4,600 paintings, drawings and engravings to the Instituto Nacional de Bellas Artes [National Institute of Fine Arts]. Another 1,000 pieces are part of the Centro Vlady, operated by the Autonomous University of Mexico City (UACM) at a site in the colonia, neighborhood, Mixcoac in the delegación, borough, of Benito Juárez. The center was inaugurated by his widow, Isabel Díaz Fabela, and his nephew, Carlos Díaz, in July 2005. It has a permanent collection of 318 paintings, 245 engravings, lithographs and linoleum etchings and 376 drawings and watercolors. Someday, we will visit there.
Posted by Reed Brundage at 6:06 PM