Mexico City's Centro Histórico remains primarily characterized by Spanish Colonial Era buildings (1521-1821), but buildings from the 19th and 20th centuries are also mixed in. Sorting out their eras from the apparent jumble is a challenge. Few buildings from the fifty years comprising the Post-Independence era (1823-1855) and the Reform (1855-1876) can be found.


However, in the area west of the Zócalo, in streets such as 16th de Septiembre, Madero, Cinco de Mayo (Fifth of May), Tacuba and Donceles that run to the Eje Central/Lázaro Cárdenas. and the north-south streets that cross them, a number of commercial buildings from the Porfiriato (1877-1911) can be found. They display the ornate late 19th century esthetics of Neo-classicism, French Second Empire and Art Nouveau. 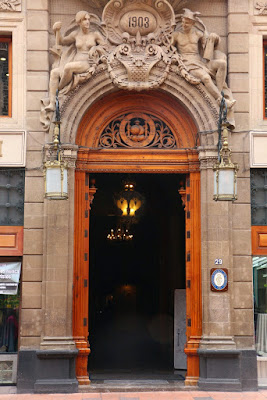 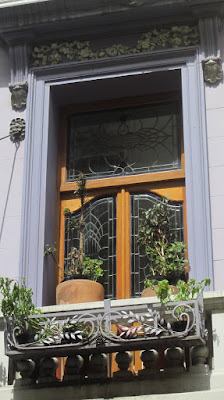 Posted by Reed Brundage at 2:42 PM No comments:

We introduced the Palacio de la Secretaria de Comunicacions in our last post on Porfirio Díaz's major public works in and near the Centro Histórico. The design is primarily Neo-classical, but mixes elements of other architectural styles.

Passing through the lobby of what is now the National Museum of Art, you come to a grand double staircase reminiscent of the one in the nearby Palacio de Correos, the Postal Palace. It fills a semi-circular atrium lit by large windows. 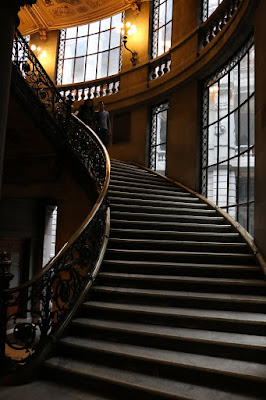 As you ascend one of the stairways, you look up two stories through the atrium 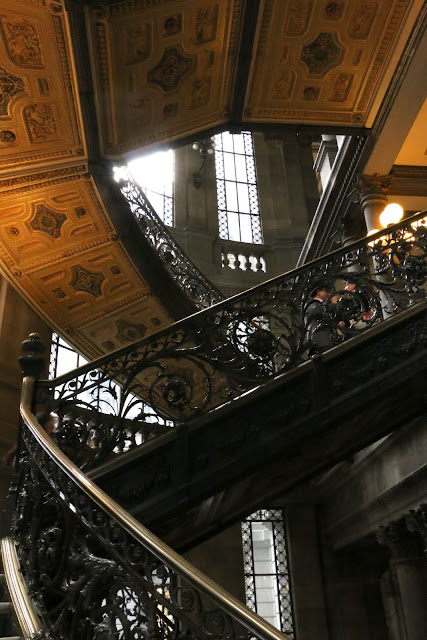 Neogothic and neoclassic details on the lamp bases and on the walls: 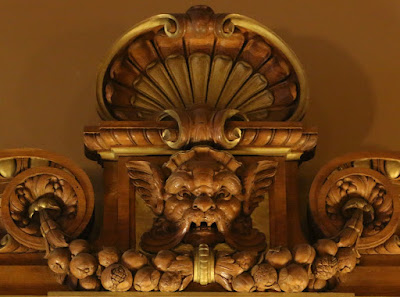 The ceiling at the top is covered with a mural recalling the religious art of the Baroque period that fills so many of Mexico's colonial churches. But intead of the Catholic God and his Angels, it portrays a female Roman Justice, descending from Heaven to conquer the Evils below, lower left. At the lower right is an idyllic scene of a campesino farmer plowing with his ox. 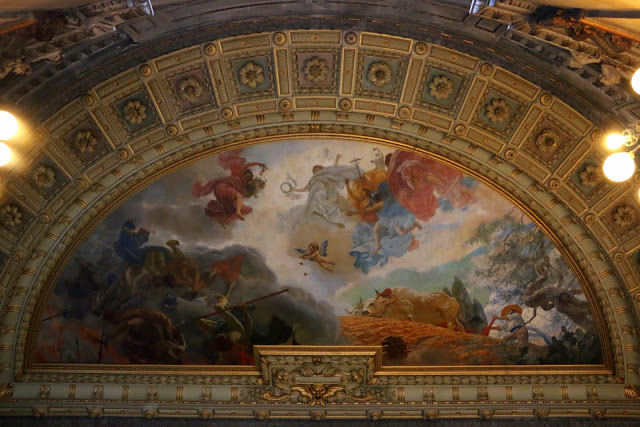 On a frieze around the mural, nude children play in a kind of Dionysian revel. 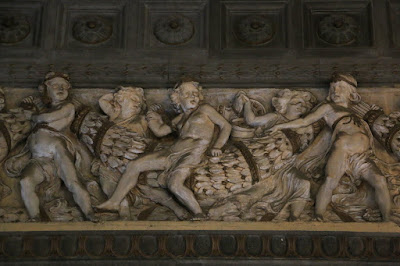 Turning around from the atrium, you face carved, neoclassic doors. 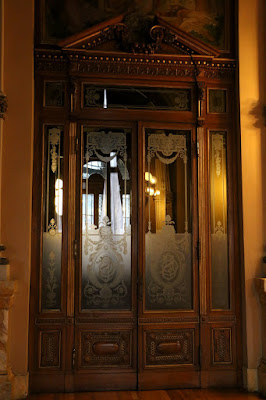 Entering, you pass through a large anteroom and a second set of doors, into the grand Reception Hall, President Díaz's preferred place for making public declarations and receiving dignitaries from abroad. 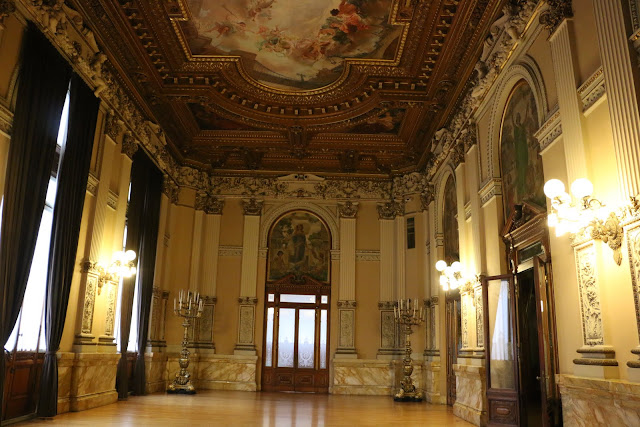 You immediately realize that you are in a 19th century European royal palace. Allegorical murals of romanticized neoclassic figures representing the arts, science, liberty, history and work adorn the end and inside walls.


Above, on the ceiling, a grand mural of Progress bestowing her blessings. 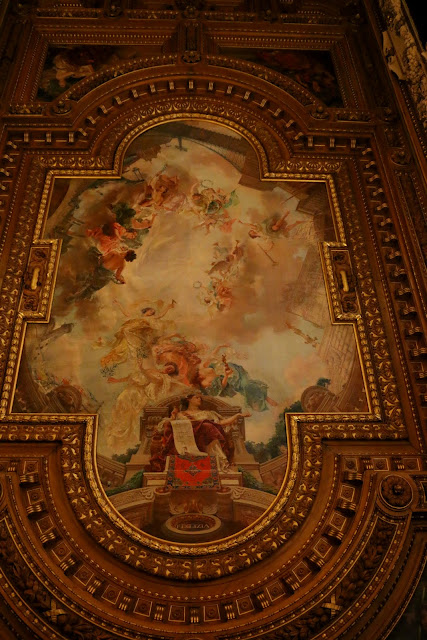 You feel that the Spanish viceroys would have been comfortable here, as would Agustín Iturbide, Mexico's first, if brief, Emperor. Santa Ana would likely find it appealing. Certainly Emperor Maximilian, who grew up in Schönbrunn Palace in Vienna, would have felt right at home. However, Diáz's presidential predecessor, the spartan republican Benito Juárez, would not.

Back downstairs, in the interior courtyard outside the windows to the grand staircase, you meet two other classic symbolic figures. 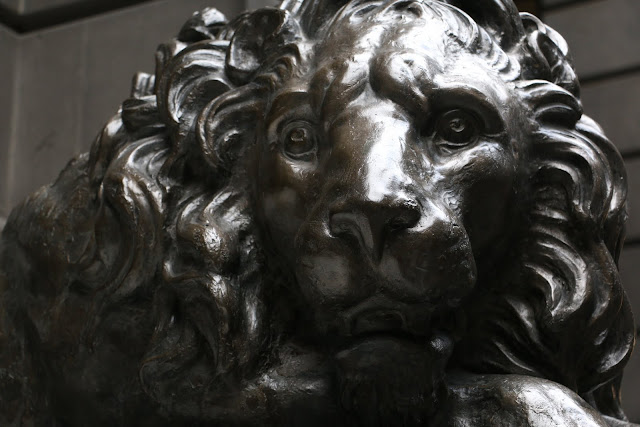 A lion who seems to be reflecting on matters. 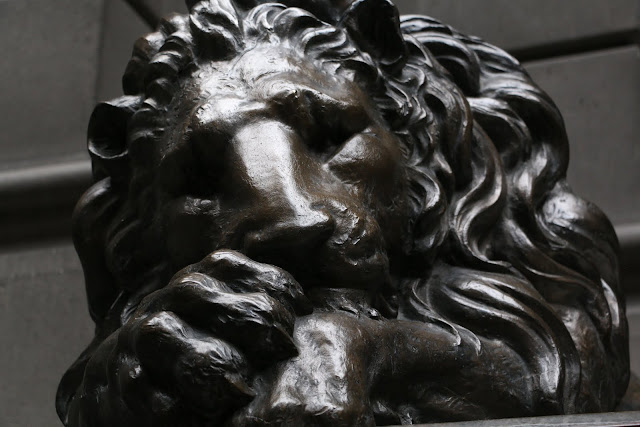 And one who is sleeping, or, perhaps, just very tired.

You wonder whether Porfirio Díaz, at the time this Palace was completed in the middle of the first decade of the 20th century and a few years before he was overthrown, was able to reflect on the thirty-some years of his reign and what he had wrought for Mexico, good and bad. Or whether, in his late 70's, he was just tired.

Posted by Reed Brundage at 9:25 AM No comments:

The Grandeza of Porfirio Díaz

During the era of the Porfiriato (1877-1911), President and dictator, Porfirio Díaz undertook to turn Mexico City into a grand, cosmopolitan European-style capital. As part of this undertaking, he ordered the construction of many major government and civic buildings in the Historic Center and adjacent areas. Often, they were designed to be grand "palaces" that served modern functions.

Three of the most impressive sit near one another at the western edge of the Centro Histórico, close to the intersection of Tacuba Street and the north-south Eje Central (arterial), also named Lázaro Cárdenas, but before the Mexican Revolution named San Juan de Letrán. They are the Palacio de la Secretaria de Comunicaciones (Palace of the Secretariat of Communications), now Museo Nacional de Arte (National Museum of Art), the Palacio de Correos (main Post Office) and the Palacio de Bellas Artes, Palace of Fine Arts. All were built in the last decade of Díaz's rule, the first decade of the twentieth century, in preparation for the 100th Anniversary, in 1910, of the start of the Mexican War of Independence.

Construction of the Palacio de la Secretaria de Comunicacions began in 1904. It was designed by Italian architect Silvio Contri to house the Secretariat of Communications and Public Works, with the intention of showing Mexico's commitment to modernization. The design is primarily Neo-classical, but—characteristic of the period—mixes in elements of other architectural styles.

The decorative elements of the building were done by the Coppedé family of Florence, who designed many elements, including door knockers, window frames, leaded crystal, stonework, furniture, lamps and ironwork.

The interior of this Palace is worth exploring in detail, which we will do in the next post.

Nearby, facing the Eje Central, between Tacuba and Cinco de Mayo Streets is the Palacio de Correos, the Post Office Palace. Its construction began in 1902, and President Díaz inaugurated it in 1907.


Across the Eje Central is the Palacio de Bellas Artes 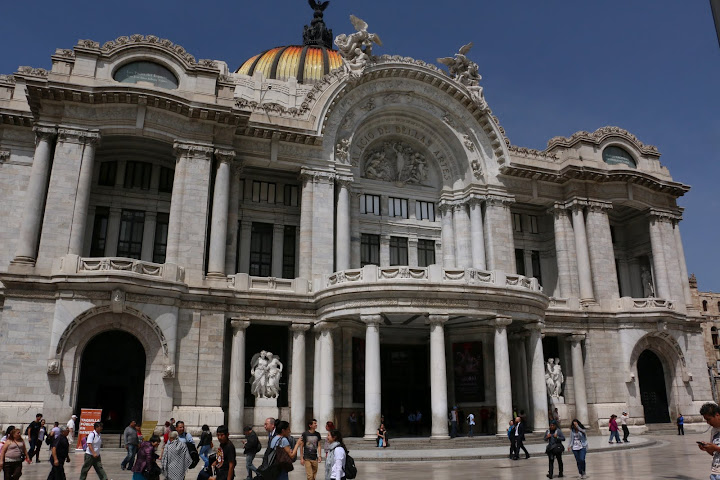 The initial design and construction was undertaken by Italian architect Adamo Boari in 1904. The exterior of the building is primarily Neoclassical and Beaux Arts. However, complications arising from the soft subsoil of the former lakebed slowed construction. The chaos of the Mexican Revolution (1910-1920) first hindered, then, in 1913, stopped construction completely.

Construction was to begin again in 1932 and be completed in 1934. The interior reflects the change of both esthetic and political eras. It is a gallery of revolutionary art. We will, therefore, return to tour the inside when we reach the post-Revolution epoch in our geographic and historical perambulations.

Immediately west of Bellas Artes is the Alameda Central. The park was created in 1592 at the direction of Viceroy Luis de Velasco. The name comes from the Spanish word álamo, which means poplar tree, which was planted here. The park was part of the viceroy's plan to develop what was, at that time, the western edge of the city. It is the oldest urban park in the Americas.

What is now the western section of the park was originally a plaza built during the Inquisition and known as El Quemadero, The Burning Place. By the 1760s, the Inquisition had virtually come to an end and in 1770, Viceroy Marqués de Croix had that plaza torn up to expand the park. The park was expanded again in 1791 by the Count of Revillagigedo, who undertook a major renovation of the cityscape.


Porfirio Díaz had the park renovated in the French Neo-classic style, adding fountains of Greek gods and other Romantic figures by the Mexican sculptor, Jesús Fructuoso Contreras, who also designed statues for the Paseo de la Reforma. In 2012, the park was completely renovated to restore its 19th century gracia, elegance.

On the south side of the Alameda, Díaz had constructed an homage to his one-time ally and then opponent, President Benito Juárez, the Hemiciclo (Half-circle).


If it reminds you of another Capitol, that is not surprising. Begun in 1910, however, only the dome was completed before the Revolution against Díaz began. After the Revolution, it remained unfinished and abandoned. Thought was given to tearing down this symbol of an overthrown dictator. But in the 1930's, President Lázaro Cárdenaz, seeking to give symbolic representation to the Revolution and a place to enshrine the remains of its diverse and often opposing heroes, decided it should be transformed into the Monument to the Revolution.

Thus, once again, just as the stones of Tenochtitlán were used by the Spanish conquistadores to build Mexico City, and New Spain's Colonial palaces were re-purposed into Mexican government offices and museums, the grand vision of a President for Life was remade into a shrine to those who overthrew him.

Posted by Reed Brundage at 8:57 PM No comments: