When we recently entered the National Palace to view Diego Rivera's mural of The History of Mexico, we didn't know that we would encounter another whole series of Rivera murals portraying what might be called the pre-history of Mexico, that is, of some of the indigenous civilizations that existed prior to the arrival of the Spanish in 1519.


Walking up the staircase below the mural, to the second floor and turning left, we encounter a series of murals portraying various regional civilizations.


Posted by Reed Brundage at 2:53 PM No comments:


We admit it. Although we initiated our Ambles around the City in the Zócalo, the huge plaza in Centro Histórico that is the heart of Mexico City, we have stayed away from the National Palace dominating its east side. Similarly, we had stayed away from the Metropolitan Cathedral, on its north side, until we were able to come to terms with, and write about Mexican Baroque architecture, of which the inside of the Cathedral is the quintessential example.

Like the Cathedral, the National Palace is intimidating in its grandeza, grandeur, and off-putting because of its associations with the history of Mexican authoritarian governments. The fact that this symbolic center of Mexican democracy is called a palace is indicative of the paradox of Mexican government: is it, or is it not, a democracy?


Nevertheless, as we were recently publishing some posts on Diego Rivera and Frida Kahlo borrowed from our spouse, Jane's "Jenny's Journal of Mexican Culture", we decided it was time to cross the threshold into the Palace to see Rivera's mural of the History of Mexico. We had also read that one could see through a window on the floor a part of what was once the private prayer room of Moctezuma the Younger in what had been his "New Houses". After destroying the house of Moctezuma, Cortés built the Palace on that site.

At the Center of Mexico's Heart, Tranquility


Visitors to the Palace enter via a side door on the north side, on Moneda (Coin) Street (the former mint was just behind the Palace). We had often glimpsed the inner courtyard as we passed by on our way to other destinations in East Centro. It looked inviting. When we finally enter, we find a beautifully landscaped, tranquil garden, an oasis in the very center of the City's bullicio, hubbub.


Part III: Mexico of the 19th and early 20th Centuries

The top row of the mural, under the arches, portrays scenes from 19th and 20th century Mexican history, primarily one of foreign army interventions (the U.S. and France), and civil wars between wealthy conservatives—supporting the privileges and powers of the Army and the Catholic Church—and liberals seeking a democratic, egalitarian government (the mid-19th century War of Reform and the early 20th century Mexican Revolution). For some reason, Rivera did not not present them in chronological order. He placed the Mexican Revolution at the center, above the War for Independence.  We present them in historical order, to make the story more comprehensible to extranjeros, foreigners.

The Mexican Revolution was a very ambiguous series of conflicts between los de abajo, those from below (represented by Pancho Villa and Emiliano Zapata) and los de arriba, those from above, represented by Carranza). The outcome was, likewise, ambiguous. Carranza became president, but was forced to accept a Constitution that included a list of "rights", such as to work and an education, sought by the popular forces. Much power, however, was given to the president, such that, despite a Congress and a Supreme Court, he could essentially ignore the liberal articles of the Constitution.

Like many other Mexican artists and intellectuals, Rivera was a communist and was disappointed by the authoritarian path the post-revolution government was taking. (In 1936, he painted a mural entitled "The Dictator", in which he portrayed Calles as a Fascist; the mural is now in Bellas Artes.) He continued to hope for a real revolution of the agrarian and working class that would overthrow the capitalist powers. As he had done in his "Ballad of the Revolution", here in the National Palace, the very seat of government, in the stairway to the left of The History of Mexico, he also painted a vision of that hope. 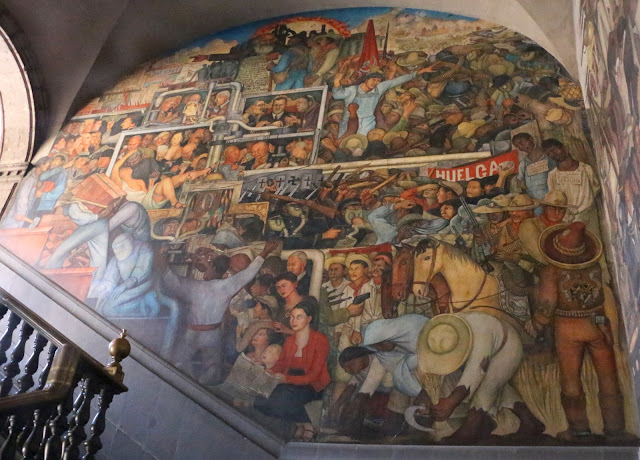 Needless to say, Rivera's vision was never realized in Mexico. Led by Calles and then Cárdenas, the Party of the Institutional Revolution (PRI) (an oxymoron of a name) consolidated power into a one-party political system, not unlike what also actually happened in Russia. This system lasted until 2000, when Vicente Fox of the National Action Party won the presidency. However, the PRI returned to power in 2012, led by Enrique Peña Nieto. The mixture of democratic forms with authoritarian ways of operating, which goes all the way back to the beginning of an independent Mexico, is ongoing.
Posted by Reed Brundage at 2:10 PM No comments:

Mexican popular culture is distinguished by its exuberance. It is effusive, overflowing with enthusiasm, excitement (emoción), cheerfulness (alegría) and vigor (ánimo). It is full of energy, noise and bright colors. Nowhere is this more true than in Mexico's traditional folk dances.

Folk Dance in the Big City

When we lived in the rural, small city of Pátzcuaro, Michoacán, there were two or three amateur folk dance companies, based in public schools, but with many adult members. They performed frequently and were excellent. As a balletomane—lover of the dance, in any form—their performances captivated us. When we moved to Mexico City, we knew the world-famous Ballet Folklórico de México was here, but we did not come across amateur groups like those in Pátzcuaro. That is, until recently.

At a couple of recent patron saint fiestas taking place in Mexico City's original villages—in San Pedro Tláhuac and Santa María Natividad—part of the festivities included performances by small, amateur folk dance companies. Being a balletomane, we took lots of photos, but apart from including a few in the Santa María post, we didn't know what to do with them.

Then, about two weeks ago, on our Facebook page, we saw an announcement of a series of performances by the Ballet Folklórico del Valle de México. the Folkloric Ballet of the Valley of Mexico. One performance was to be held on a Sunday afternoon in the central plaza of the southern Delegación Tlalpan—a picturesque, tranquil Spanish Colonial plaza with a small-town feeling. We visit it often to relax from the urban bullicio (hubbub) and enjoy a delicious, unhurried comida (afternoon meal) at one of the many restaurants lining the square.

Off to Delegación Tlalpan for Ballet Folklórico

So this past Sunday, we set off by taxi at about 11 AM in order to arrive at Tlalpan plaza before the 12 noon performance. When we arrive, we see the stage set on the stone esplanade in front of the ayuntamiento, headquarters of the delegación. A small audience is begining to occupy the plastic folding chairs set up for them.

The open-air stage is partially covered by a huge, bright yellow tarp, casting a yellow tint down the front of the stage; in contrast, the back of the stage is in the strong Mexican sun. Also in the background, reflecting and intensifying the sunlight, are white tents shading the puestos (stalls) where artesania, arts and crafts, are sold on the weekends.

Managing the strong lighting contrasts presents a genuine photographic challenge. Checking out several positions to find the best possible option, we settle on the corner at stage right, where the gray stone ayuntamiento partially provides a softer, more neutral background. We establish ourselves because we know that if we move away, some other photographer will take it.

Soon, over a PA system (always loud in Mexico), an announcer calls primera llamada (yah-MAH-dah), first call. It is a tradition at Mexican performances to make a series of three llamadas, calls, to alert the audience to the approaching performance. The calls mirror the three llamadas sounded by the ringing of a church's bell before every Mass. In a few minutes, segunda llamada is made followed in short order by the tercera llamada. Lively music issues from the large speakers at each side of the stage (one right next to our ears!) and dancers enter the stage from steps at the rear. The show begins! 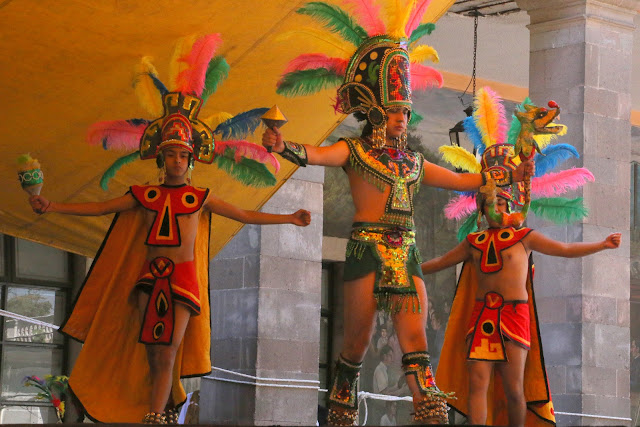 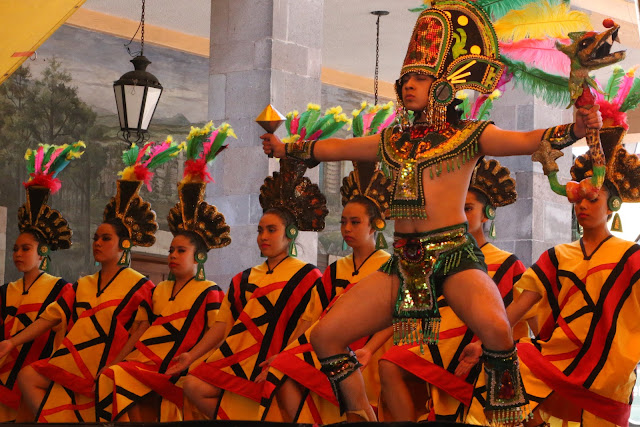 These aren't the Aztec dancers we see at church fiestas or in the Zócalo. Obviously, their dance has been formally choreographed and costumed for a show. Folk dance performances often begin with this reference to the pre-Conquest Aztec culture.

The next dance transports us to post-Conquest Mexico and its transformation into an extension of Spain: full, colorful skirts over generous, white petticoats. 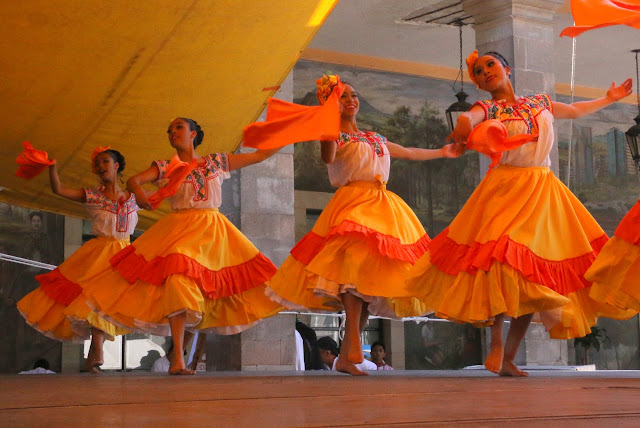 This transports us directly back to "our" Pátzcuaro and its Lake. The Lake is known for its special species of small white fish. The embroidery on one of the boys' pants is distinctively Purépecha.

Dance of the Moors 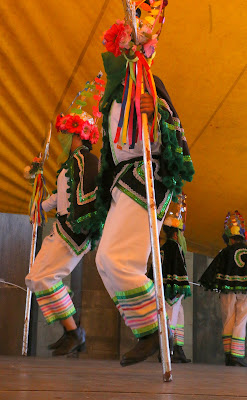 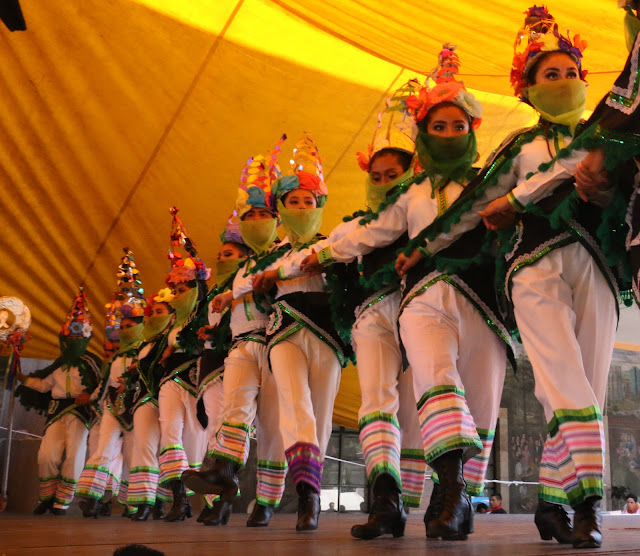 The Dance of the Moors was the first folk dance we ever saw in Mexico, performed in a pueblo on the shore of Lake Pátzcuaro on the night of the Purépecha celebration of Nuevo Fuego, New Fire, the indigenous New Year, on February 1-2 (mid-winter). In that performance, the dancers wore long robes and capes; similar scarves covered their faces, and the tall hats they donned were somewhat different.

The Dance of the Moors, like the Battle of the Moors and Christians that we have seen enacted at fiestas here in Mexico City, was introduced by the Franciscan friars to convey the message of the need for "pagans" to submit to Catholic Christian conversion, i.e., the Spiritual Conquest.

Cowboys and Cowgirls: It's Hoedown Time! 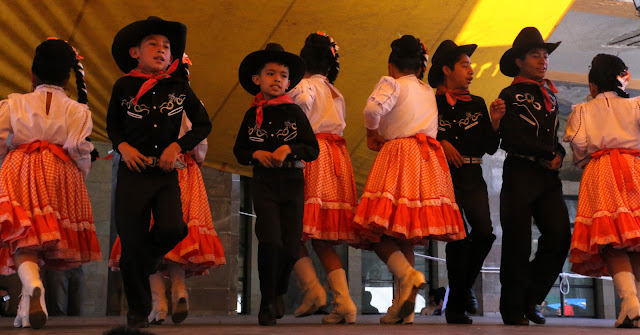 Mexican Cossacks, or What?

Totally comsumed with finding and capturing "shots", we weren't able to attend to the announcements of each dance. Given the ankle rattles, this one is evidently indigenous, but we have no idea who these guys are portraying. Their moves remind us of Cossack dancers from a Russian ballet. 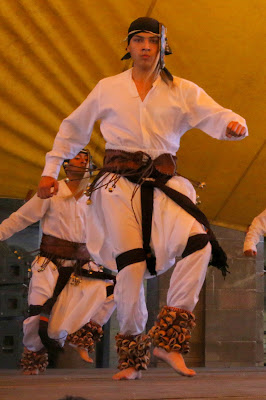 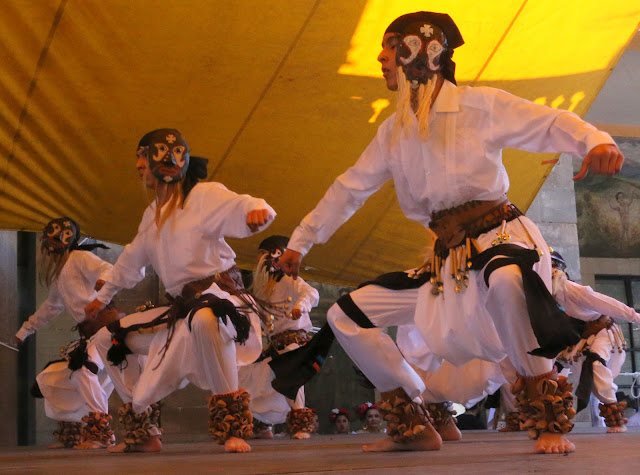 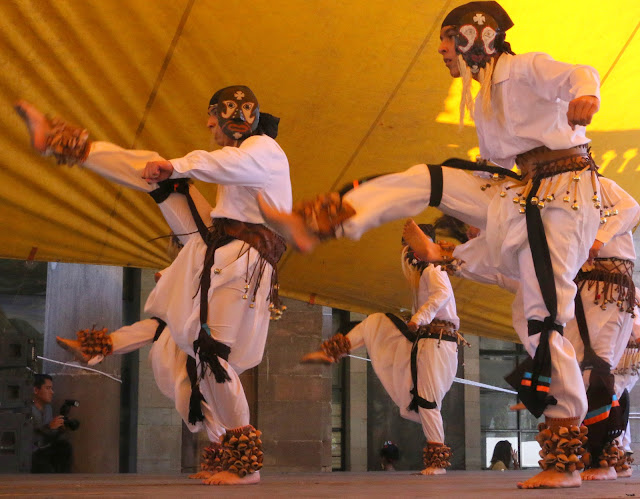 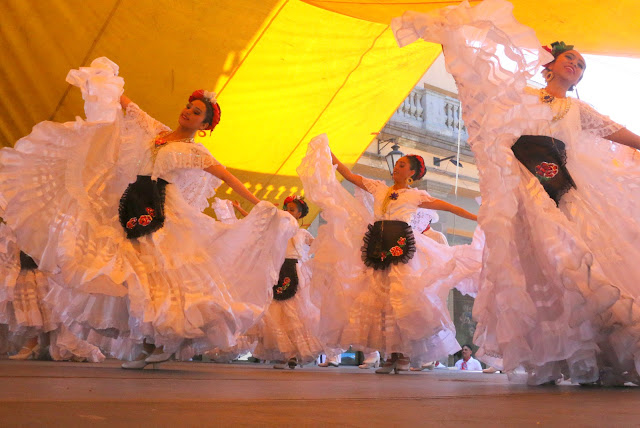 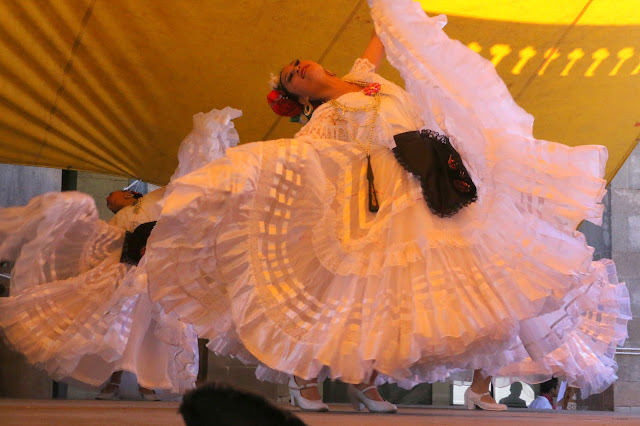 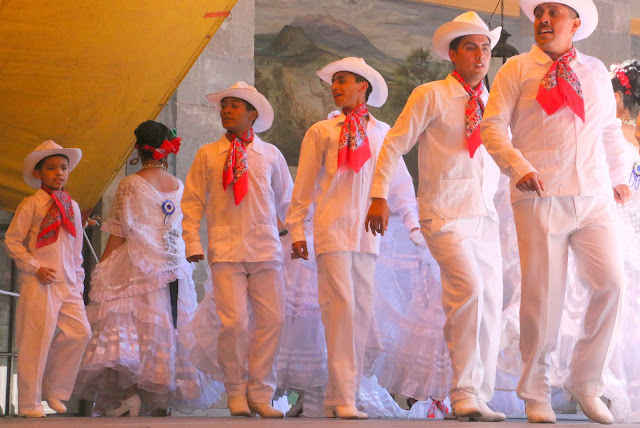 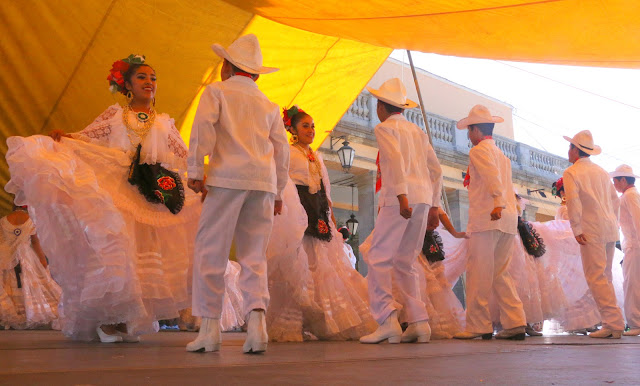 On to the Mexican Revolution! 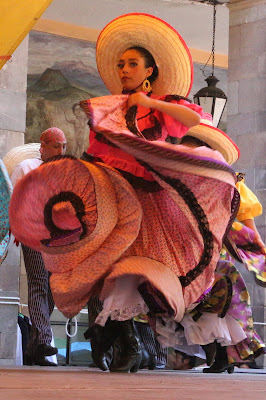 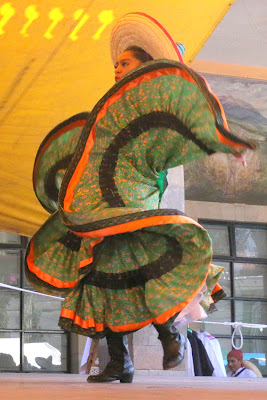 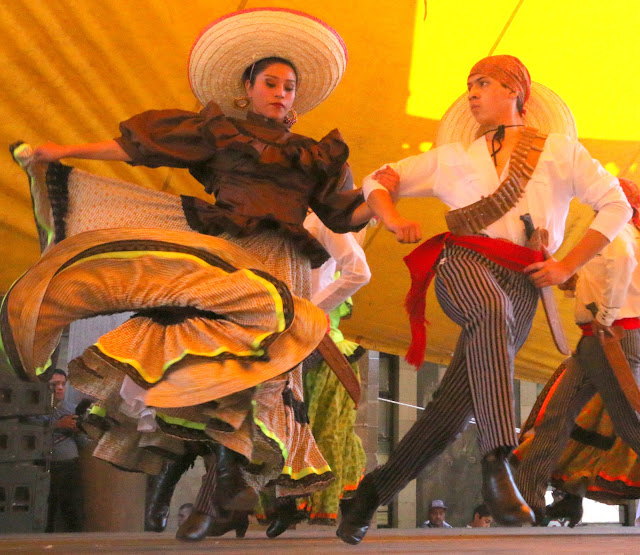 Beauty, Colorful Dresses and a Dance Where Girl Gets Boy, and Vice Versa 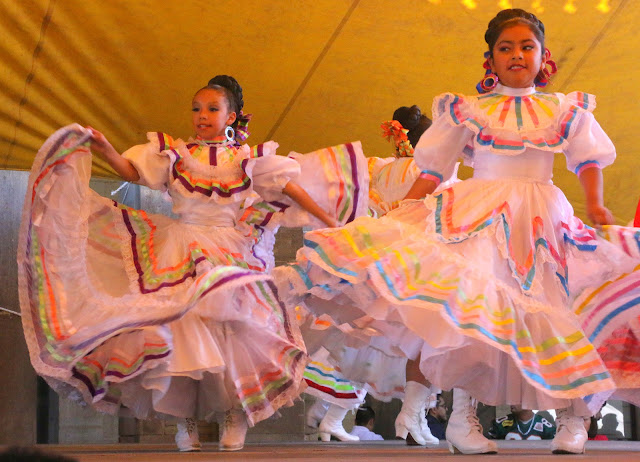 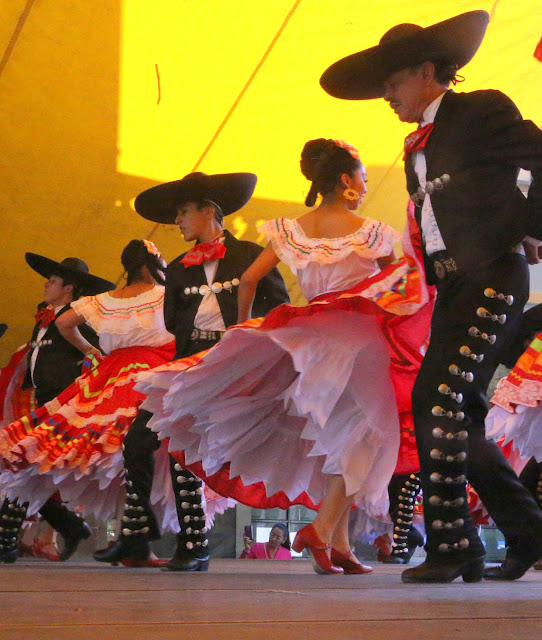 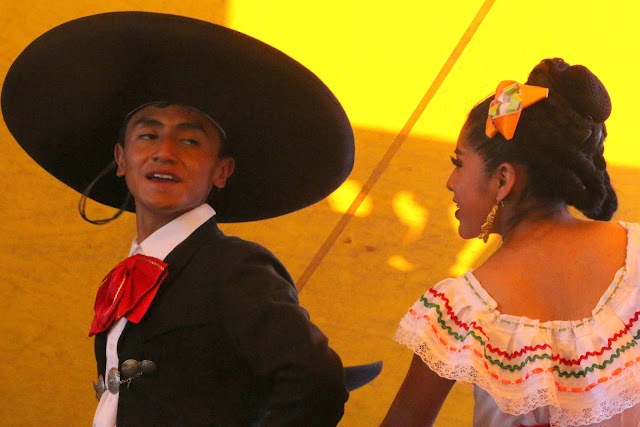 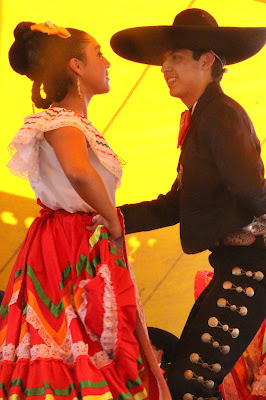 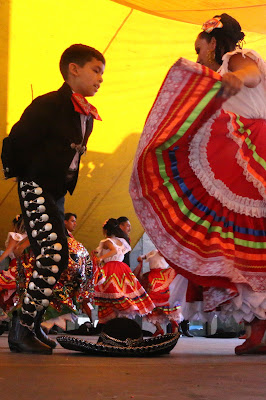 Posted by Reed Brundage at 9:59 AM No comments: