When we first moved to Mexico in august 2008, we settled in Pátzcuaro, a small Colonial city in the southwestern state of Michoacán. In seeking to adapt to life in Mexico, one of the first places we explored was the central mercado, market, facing the Plaza Chica, the Small Plaza, as distinguished from the Plaza Grande, location of hotels, restaurants and specialty shops.

A one-story, covered structure, the mercado filled a good city block. Inside it was a rabbit warren of small puestos, stalls, also known as locales, selling just about anything you might want: women's, men's and children's clothing, housewares, kitchenware. In one section was a fish market. There were also estéticas, small stalls where you could get your hair cut. The street to one side and the one in the rear were full of puestos selling fruits, vegetables, fish, cheese. In the front, facing the plaza, were numerous stalls selling cooked food: tacos, tortas (sandwiches in fresh rolls).

When we decided, in 2011, to move to Mexico City, with its eight million people and modern urban pace, we wondered whether we would find any such mercados or only big chain stores, like Walmart and Soriana, a Mexican superstore chain, both of which have invaded Pátzcuaro and affected sales in the mercado. Our doubt was quickly put to rest. The real estate agent who showed us an apartment in Coyoacán, which we immediately fell in love with and decided to rent, showed us that two blocks away was the Mercado Churubusco.


After we moved in, one of the first things we did was go to the market to check it out. It is much smaller than the Pátzcuaro mercado, as it only serves the immediate neighborhood of San Mateo Churubusco and our adjacent Colonia Parque San Andrés. There are no clothing stalls and no fish stand, but there are stands offering a choice of fruits and vegetables and others selling fresh chicken and meats.

There are also deli counters for ranchero cheese (good on tortas, rolls), luncheon meats, yogurt and the like and the specialty stalls selling a variety of beans, rice, herbs and chiles.  In the "household goods" section to the rear, we can buy cleaning utensils, light bulbs, flower pots and paper goods. There are two stationery stalls.

There is also a plumber, an electrician, a key-maker ... and an optometrist! In front, stands sell cooked meals. Taxi drivers like to stop for their comida meal in early afternoon.


According to an article in Wikipedia, there are 317 such mercados spread across Mexico City, from those located in and serving local barrios and colonias, like Mercado Churubusco, to huge ones serving wide swaths of the metropolis and specializing in one particular type of merchandise.

Most of them have been built by the City government since the 1950s to get street vendors off the sidewalks, where the tangle of puestos can quickly turn a pedestrian into feeling like the subject of a psychological experiment, running a maze. It is not without reason that laberinto is a favorite word in Mexican culture. However, as we will see, the City government has not succeeded in ending commerce on the streets.

While these mercados are under competitive pressure from the international super-stores that have arrived in Mexico since the North American Free Trade Agreement (NAFTA) with the United States and Canada went into effect in 1994 (Walmart is now the biggest single employer in the country), their convenience, economical prices, quality of fresh foods and cultural tradition­—including the personal, one-on-one relationships between seller and buyer­—have, so far, kept them going.


However, these enclosed, structured markets are not the only ones in the City, or in every other city, town and hamlet across the country. If we eliminate the component of a specific building and expand the definition of a market to any place where buyers and sellers meet for the sale of goods, then we see markets in many other places in Mexico City.

Tianguis is a Nahuatl word for open-air market, the original markets of Mesoamerica. The tianguis of Tlatelolco, to which Moctezuma took Cortés, had hundreds of vendors filling a plaza. Cortés thought it bigger and better organized than any market in Spain. Now tianguis occupy space on city streets and plazas, sometimes only certain days of the week, sometimes every day. The Mexico City government officially licenses over 1,000 of them, which are run by associations of member merchants who pay dues and rental fees for their puesto space.

In Colonia Parque San Andrés, a tianguis sets up shop on Saturdays on Avenida América, taking up two of its four lanes. On Tuesdays, it returns to a nearby calleja, narrow side street, just off América. Vendors there tell us they set up on nearby Avenida Pacífico two other days of the week and elsewhere for still two other days, for a full six-day work week, not unusual for Mexicans. 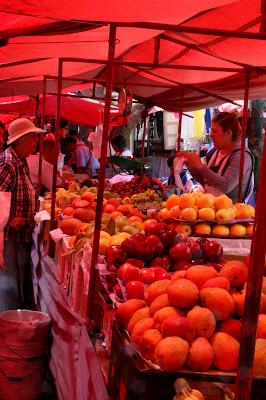 Street markets extend beyong the well-organized tianguis. Almost always near indoor mercados, sometimes adjacent to tianguis, around many Metro stations, and along many streets in front of regular stores, there are puestos. Some are quasi-permanent, with metal frames supporting the hules, plastic tarps, set in the concrete. In other locations, the frames are set up each morning and taken down in the late afternnoon.

The vendors in these informal tianguis pay a jefe, a boss who controls the space, a cobro del piso, a fee to have the use of the space. While they are not technically legal, depending on the whims of the city government, they can be left alone (paying mordidas, "bites" to the police and other officials), or forced to move elsewhere when newly-elected officials want to "clean up" a public space. Before the Alameda, a large park in Centro, was renovated in 2012, its walkways were full of vendors. During the renovation, they were forced to leave and not allowed to return when the work was completed.

A variation on a street puesto is the cart or a set of buckets or crates that are easily moved, but which the vendor sets up everyday in the same place to do business.

The next level of "informal" market are the ambulante vendors who stand or walk around selling their wares. They may be in or near a mercado or tianquis, in a street where there are puestos, in a plaza or park or sometimes alone on the street of a neighborhood. The Metro is another major "marketplace". 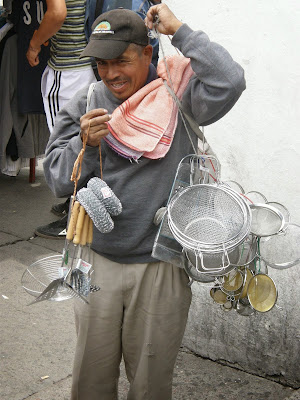 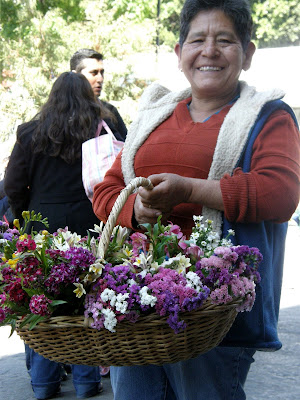 The final type of market, where seller and buyer meet, are the bicycle-riding and walking vendors who travel through residential neighborhoods like our Parque San Andrés, each ringing a bell or sounding a horn that identifies them or calling out their offer.

The man selling camotes, cooked sweet potatoes, has a steam-driven whistle that sounds like a train whistle. "Tamales oxaquenos, ricos, calientitos", "Rich, hot Oaxaca-style tamales (wrapped in banana leaves, instead of corn husks)" calls out the recorded announcement from the young man peddling a tricycle cart past our apartment. The knife sharpener man has a distinct whistle he blows from his bike, which with its rear wheel hiked up on a stand, provides the power for his grinding wheel. A young couple goes door to door selling fresh vegetables from milk crates carried on a hand cart.

So, in Mexico City, just as in every other Mexican city, town and hamlet, the ancient process of marketing, of offering just about anything imaginable for sale to potential buyers, goes on everyday, including Sundays, in every imaginable public space, from mercado buildings, to tianguis street markets, to strings of puestos set up in any available open space, to ambulantes walking the street or Metro car corridors, to neighborhood peddlers (who often literally pedal their wares on tricycles and bicycles) going door to door.

These are the many manifestions of the Mexican market. They are always full of options, full of tempting aromas of fresh and cooked foods, full of the sounds of vendors hawking and customers chatting, full of face to face encounters between seller and buyer. Full of life. While Walmart has arrived in Mexico, it has not eliminated these vibrant, distinctive essential components of Mexican daily life and popular culture.