On Venezuela Street, in the Centro Histórico—a few blocks north of the former College of San Ildefonso (National Preparatory [High] School) and the Secretariat of Public Education with their murals by Diego Rivera and José Clemente Orozco—is the Abelardo Rodríguez Market. The venue is very different from the official government buildings of the Secretariat or the former High School. But here, virtually hidden in plain view, sit historical and artistic treasures from the era that emerged out of the Mexican Revolution and that fell, increasingly, under the shadow of an impending World War.

Motivated by the populist values of the Mexican Revolution, the Market was built in 1934, during the interim presidency of Abelardo Rodríguez (1932-34), as a prototype integrating a modern, indoor marketplace—replacing street stalls—with community social and cultural services, including a day care center and a theater.

However, the Market's most distinctive feature is the approximately 1,400 square metres (15,000 sq. ft.) of wall and ceiling space covered in murals painted by a group of ten artists: six Mexicans and four from the United States, all under Diego Rivera's supervision.

The Mexicans included Ángel Bracho, Leopoldo Méndez, Antonio Pujol, Miguel Tzab, Pablo Rendón and Ramón Alva Guadarrama. Most had studied at the National School of Plastic Arts, the post-Revolutionary name for the Academy of San Carlos, where Rivera, José Clemente Orozco and David Siqueiros had studied. All would have careers as painters through the middle of the 20th century, contributing to and broadening the Mexico Mural Movement.

The four artists from the U.S. were Paul "Pablo" O'Higgins, who had emigrated to Mexico in 1924, sisters Grace and Marion Greenwood from New York City, and Japanese-American Isamu Noguchi.

1930s: Between Revolution and World War

In the foyer of the community center section, we get our first taste of political art — it takes us back to Rivera's own militant Ballad of the Revolution in the Secretariat of Education.

They were also members of the Liga de Escritores y Artistas Revolucionarios, the League of Revolutionary Writers and Artists, founded in 1933 by Mendéz, O'Higgins and Luis Arenal as a successor to the Union of Engravers, Painters and Sculptors founded in 1923 by Siqueiros, Rivera and Orozco. The League was the Mexican member of the International Union of Revolutionary Writers, founded by the Third Communist International in the Soviet Union in 1930. In 1937, the League was to be replaced by the Taller de Gráfica Popular, People's Graffic Workshop, also founded by Mendéz, O'Higgins and Arenal with the goal of using art to advance revolutionary social causes. It existed until the end of the 20th century.

Moving to the inner patio, we encounter more subdued paintings, more like Rivera's murals of Mexican workers in the Patio of Labor in the Secretariat of Education.


Counterpoint of Revolution and Everyday Life

The Market is entered from the street by a series of passageways lined with murals—some explicitly revolutionary like those in the entrance foyer.


Yet another style, one I particularly like. I've been uable to find any information on the artist, Pablo Rendón. 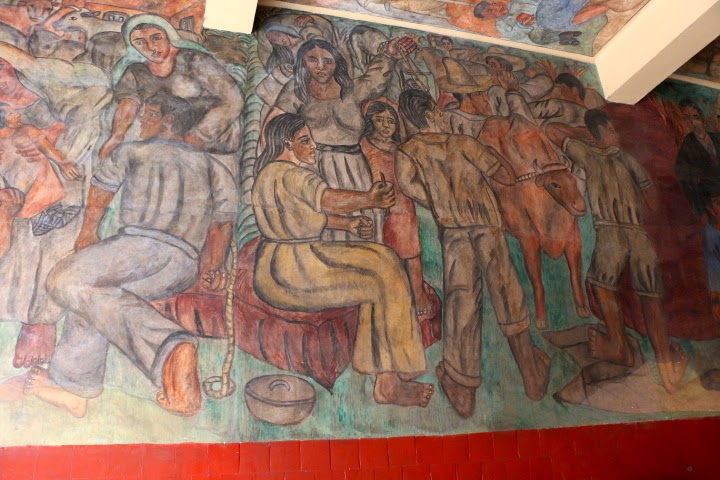 Last, my favorite of all:

See more of our series on the Mexican Revolution and Mexican Muralists:

For the story of the Mexican Revoluion, see:


Mexican Revolution: Its Protagonists and Antagonists

Posted by Reed Brundage at 8:08 PM