The Siqueiros Cultural Polyforum is the last major work of David Siqueiros (1896-1974). For the artist, it was the culmination of a lifetime of vision and work, the fulfillment of his desire to realize what he called the "fourth stage of Mexican Muralism" by creating a three-dimensional work completely integrated with the design of the building in which it was situated and executed by an international team of artists. It is located on Avenida Insurgentes in Colonia Nápoles, Delegación Benito Juárez.

Completed in 1971, twice the size of the Sistine Chapel, it is the world's largest mural assemblage ever painted. An integrated structure, the building was specifically designed to display the murals.

The exterior consists of 12 panels of sculptured painting. The walls and ceiling of the nave-like interior space are covered with "The March of Humanity on Earth and Toward the Cosmos" which is composed of two murals, one on each side, and on the ceiling.

It is a grand, even overwhelming, edifice and work of art. Trying to make sense of it is a challenging, if not presumptuous effort. After visiting it twice, reading—and more or less digesting—a biography of Siqueiros (see our Page: David Siqueiros: Twentieth Century Odysseus, based on Siqueiros, Biography of a Revolutionary Artist by D. Anthony White) and experiencing, face to face or vicariously, other of the artist's works, it strikes us that to be understood it needs to be placed in the context of other works of la grandeza, grandness or grandeur, that are central to the history of Mexican culture and art.

This history begins with the great cities of the Mesoamerican civilizations, where we are surrounded by monumental architectural and artistic statements that totally dominate and define sensory experience. As complete environments, they were aesthetic and physical statements situating the common folk—and us—in the presence of unified sacred and political power, the reign of gods and kings. Murals were an integral part of that message.

Then there are the Spanish Baroque Colonial cathedrals and churches of all sizes, found from the major cities to the smallest rural villages, which—though on a lesser scale—nonetheless still seek to surround and define the experience of those who enter. Their message, like that of the earlier Mesoamerican cities, is that you are in the presence of God, supported by a State that is both His chosen instrument and defender.

On a personal level, Siqueiros's father was a devout, almost mystical Catholic who, every Sunday, took his children on a kind of pilgrimage from one Mexico City Baroque church to another to hear a series of masses. He was also knowledgeable about the painters who had decorated them in the dynamic, dramatic Baroque style.

With this historical context of Mexican art in mind, we are somewhat less perplexed by what the Polyforum's patron, businessman Manuel Suárez y Suárez called "The Siqueiros Chapel". As further indication of the grand vision in play, he called the artist "Michelangelo" and himself "Pope Julius II".

Siqueiros had even attempted an earlier version of painting a three-dimensional mural in a chapel. In the 1940s, he was invited to teach a class in mural painting in San Miguel de Allende, in the state of Guanajuato. Invoking his teaching principle that students learn mural painting by painting one, he took on the chapel of a former convent. Because of differences with the art school director, who seems to have been a scam artist who didn't pay the artist, the mural was not finished. (During Jane's and my visit to San Miguel in 2007 to scope out a place to "retire", we literally stumbled in the dark into this chapel. Then someone turned on the lights. ¡Híjole! Wow!)

So think of the Polyforum as a modern, secular, quasi-Marxist version of a Spanish Baroque cathedral, which presents a double challenge to those of us with a Puritan Protestant and "bourgeois democratic" heritage.

The twelve murals on the exterior can be seen as painted versions of stained-glass windows. Like the windows of a cathedral or large church, most of them represent a central archetypical theme: human conflict, struggle, death and rebirth. There are also a couple of saints. These murals are in a variety of styles reflecting the personal history of Siqueiros's painting styles.

Two of the murals are on the theme of the Spanish Conquest of the indigenous peoples of Mexico, linking us to their ancient grandeza and their "mestizaje", merger, with the grandeur of the Spanish Empire. Siqueiros was an apostle of José Vasconcelos' belief that Mexicans were a new race, arising from the antithesis between—and merger of—indigenous and Spanish blood to create a cultural synthesis composed of the best of both worlds.

Three murals are on the theme of The Leader, which becomes central inside:

Other murals are more abstract in style and content:

Entering the 1970s-style lobby, all sleek curves (think Danish Modern), we ascend a circular stairway and emerge into a huge, nave-like space. At the end of the oblong space—where the altar of a church would be, and extending out from the wall—is a pair of huge, sculpted hands.

Along the curving side walls are spread the two murals, overwhelming in their complexity and the force of their colors and shapes. Each one is framed with a proscenium-like arch, as if they were scenes in some Grand Opera, where we have a front row orchestra seat.

Instead, we move past them, as if we were walking past some monumental murals in ancient Teotihuacán or Cacaxtla, or around the aisles of a cathedral, past its various chapels. Over Siqueiros's objections, Suaréz actually had a circular, rotating floor built so viewers can sit passively and watch the murals move by them.

We take a close look to try to sort out the details of the panoramas.


March of Humanity Toward the Democratic, Bourgeois Revolution 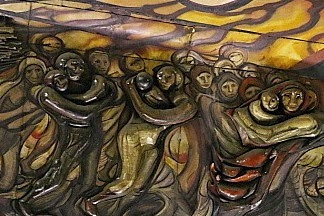 The theme is archetypical: Man, woman, the masses, oppression, rebellion, leaders, martyrs, traitors. It is a Marxist drama, not unlike the Christian one.

March of Humanity Toward a Future Revolution 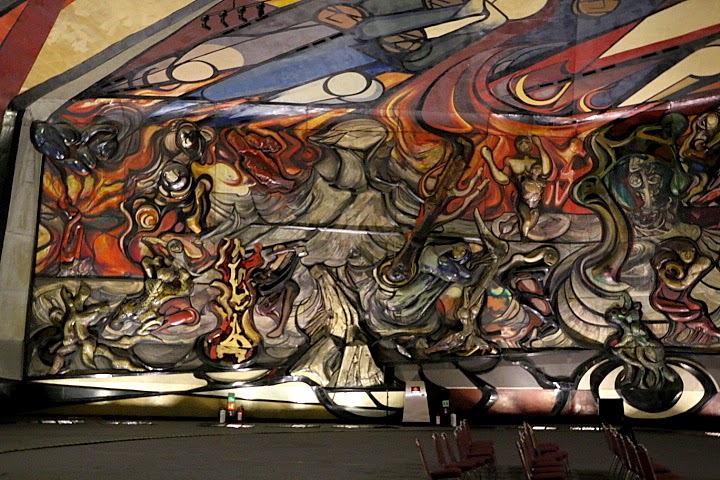 This mural is more clearly divided into sections than the first. Five sections are created by a series of four trees, or tree trunks, which also symbolize a progression from despair to hope. 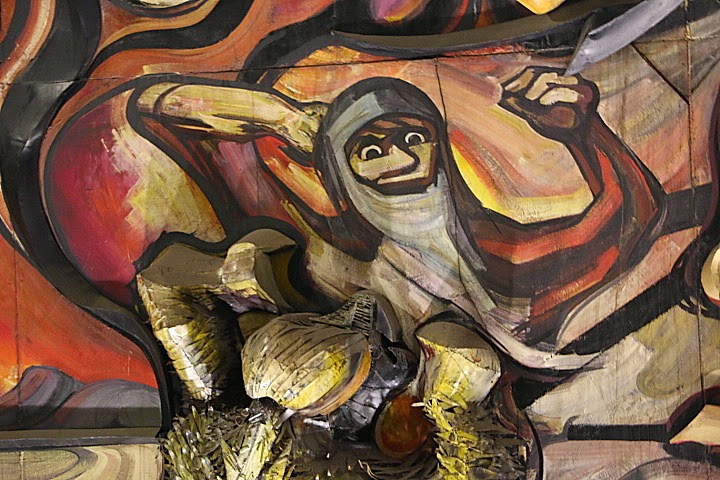 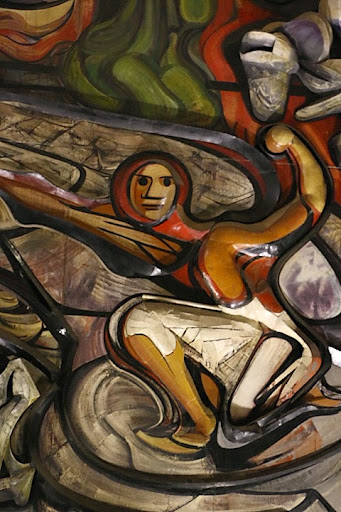 Hope in Individuals and New Leaders

After the disappointment and despair of the Bourgeois Democratic Revolution, there is the hope of a new revolution, the rebirth of life, as symbolized in the succession of trees ending with the Tree of Life.

Interestingly, there are no peasant or laboring masses either suffering repression or rising up against it. Here are a series of individuals, symbolic representatives of archetypical human roles, the New Adams and New Eves, but individuals, nonetheless. It is not a specifically Marxist message, but more universal, more generic, virtually religious.

Most notably—as in the murals on the outside of the building and in the March of Humanity Toward the Democratic, Bourgeois Revolution—the theme of leaders is repeated. There are false leaders and demagogues, but there are also new leaders, women as well as men who will, somehow, initiate a renaissance of political and social life.

When questioned about his painting of a portrait of Christ for the Vatican, Siqueiros replied that, Christ


"was the first revolutionary of history, who rebelled against oppression for the benefit of all humanity,...a combatant in the struggle for the transformation of human life."

Siqueiros considered Jesus a partner of Lenin in the fight against imperialist aggression, be it Roman, European or "from north of the Río Bravo (Rio Grande)".

Of the figures in the March of Humanity Toward a Future Revolution, Siqueiros said,


"They return, anew, to having enthusiasm. They return to having faith. Those who say 'It's not sufficient, it's not enough' come from different places. The great movements do not stop; they take new steps and seize new moments in the struggle. Let's continue moving forward."

Certainly, moving forward is what David Alfaro Siqueiros did all his life.

See our other posts on Mexican Revolution and Mexican Muralists:

Posted by Reed Brundage at 5:50 PM