Reverberations of the Mexican Revolution: Representing the Ongoing Struggle

High up under the dome of the Monument to the Revolution, along the observation walkway and enscribed in plexiglass, is the affirmation: "To the Revolution of yesterday, today and tomorrow."

It is a Mexican credo, expressing the belief that the Revolution was not completed in 1917 or even in the years afterward, but remains to be fulfilled. 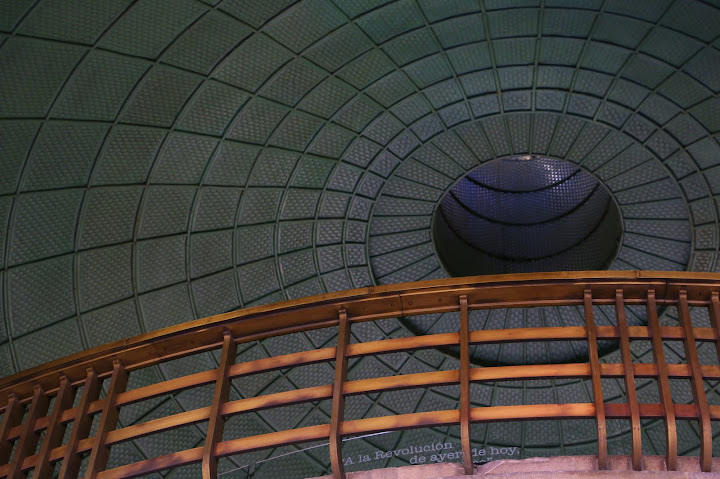 This declaration is more than a proposition. It is a statement of faith made in a post-Revolutionary effort to reconcile the anarchy of the series of civil wars fought from 1910 to 1917 and the violent power struggles that followed it through the 1920s, with the ongoing incompleteness of the fulfillment of the popular hopes raised for liberty, equality and justice for all embodied in the Constitution of 1917. Thus, the phrase postulates that the fulfillment of those promises requires struggle in the present that will need to go on into the indeterminant future. The refrain of the faithful that literally reverberates to this day through the streets of the capital is "¡La lucha sigue!"—"The struggle continues".

Two Mexican historians sum it up in a recent book on the Revolution and its meaning in Mexican culture:


"...the Revolution was not only used by the State to legitimize itself, popular organizations (working class and poor) have had it as the referent and symbol guiding their struggles. The predominant way of doing politics throughout the twentieth century was the politics of the masses established by the Revolution, that of mobilization and struggle (lucha) in the streets, organized in the workplace, in the ejidos (indigenous communal lands) and schools, by collective actors ...

This Revolutionary faith is manifested in frequent protest manifestaciones, demonstrations, that go on in Mexico City. They are usually organized along streets that form a slanted cross defined by three symbolic architectural points:
The branches of the cross intersect where Avenida of the Republic, coming from the Monument, crosses Reforma and becomes Avenida Juárez, leading to the Zócalo. These avenues are the stage on which the drama of these continuing struggles to fulfill the promises of the Revolution plays out.

However, this blog is not about the politics of these struggles (for those, see our Mexico Voices blog). Here, we are interested in discovering the symbolic representations of the Revolution and its ongoing proclamations in the cityscape and public art of Mexico City. Of course, there are the names of streets (20th of November, Madero, Revolution, Carranza, Zapata, División del Norte [name of Villa's army]), colonias (Francisco Madero, Alianza Popular Revolucionaria) and delegaciones, boroughs, (Venustiano Carranza, Gustavo Madero, Álvaro Obregón) and, of course, the statues.

But in the most unexpected places, we come across representations of the Revolution:


In a rather peculiar setting, but one quite Mexican in its peculiarity, we come across a rather strange mural. The setting is the Museum of the Secretariat of the Treasury, housed in the former Palace of the Archbishop, on Moneda (Mint) Street in Centro Histórico. The Treasury took over the building during the Reforms of the 1860s, when church property was expropriated by the government of Benito Juárez. The Treasury has a very nice art collection built from works given it in lieu of payment of taxes.

The mural, Song to the Heroes, by José Gordillo, a student of Dr. Atl, David Alfaro Siqueiros and Diego Rivera, is in the stairway. Created in 1952, it has two parts, which seem unrelated in both style and mood.

The Metro: Where Revolution and Mural Art Meet

The Revolution, or at least memories of it, live on in another, unexpected space. The Metro is the most visited public space in the city (average of 4.4 million travelers per day), so the city government has made it a space to present public art. Many of its stations serve as galleries for displaying murals portraying more or less explicit lessons in Mexican history or messages with an implicit social and/or cultural intent.

As such, these Metro station murals are direct descendents of the revolutionary mission of the founding fathers of Mexican Muralism; namely, to place politically meaningful art in public spaces. Metro stations become the extensions of the Secretariat of Public Education and San Ildefonso, variations of the marriage of everyday space with art with a message which was first embodied in the Abelardo Rodríguez Market.

In the Insurgentes Station on Line 1, we find a virtually explicit acknowledgement of the transmission of that revolutionary heritage that had its beginnings one hundred years ago with Dr. Atl in the Academy of San Carlos.


The Revolution, or at least its particular heros and villains, is explicitly presented in a passageway in Hidalgo Station, where Lines 2 and 3 intersect.

As manifested in the Central Primary School murals, the establishment of secular education was one of the major achievements of the Revolution. The National Preparatory (High) School was established during the Reform period of Benito Juárez in the mid-19th century, but there was little further development of public education during the rule of Porfiro Díaz in the second half of that century.

In 1910, just before the Revolution broke out, the National University was established by Justo Sierra, who was Secretary of Education under Porfiro Díaz. However, with the war, it didn't get underway until José Vasconceles was appointed in 1920 as rector for a short period before being named Secretary of Public Education. The University occupied the buildings of the former Royal and Pontifical University of Mexico in Centro Histórico, which had been founded in 1551 by decree of Holy Roman Emperor Charles V and closed in 1867 during the Era of Reform.

In the 1950's the Mexican government decided to move the University to an entirely new campus in the Coyoacán Delegación, borough, in the south of the city. We will visit the Ciudad Universitaria, University City, next. For now, we make a stop in the University Metro Station at the southern end of Line 3, where there is a mural portraying the history of education in Mexico and its modern, secular transformation as a result of the Revolution.

However, it is in the Xola ('Shola') station, on Line 2, just a few stops north of our home-base station, General Anaya, that we find ourself confronted by a mural that takes us back—not just in Revolutionary themes and imagery, but in dramatic artistic style as well—to the works of Orozco and Siqueiros that we first encountered in Bellas Artes.


But to the left, right and behind this vision of cultural, spiritual and political resolution, all is not well.


In the background of this epic struggle, representatives of the people of today express their protests.

The creator of the mural is Ariosto Otero Reyes, born in 1949, who, like his famous "Great Three" predecessors, attended the Academy of San Carlos, named the Superior School of Plastic Arts in the 1920s after it became part of UNAM. Otero Reyes has created murals at other sites in Mexico City and elsewhere in the country.

This mural was orginally placed in the new Merced Commercial Center in East Centro in 1997, during the city administration of Cuauhtémoc Cárdenas, son of President Lázaro Cárdenas (1934-40), who is viewed as having most fully implemented the aims of the Revolution. However, in that location, it was poorly cared for, so, in 2008, at the insistence of Otero Reyes, it was removed, restored and placed under the care of the Metro system in Xola station.

The Metro's website lists another Otero Reyes mural, also created for Merced, called "Monstruos de fin de mileno," "Monsters of the End of the Millenium," portraying what the muralist saw as the now universal struggle of the poor and powerless against the rich and powerful. The Metro´s website says it is in La Raza (The Race) station where Lines 3 and 5 cross, north of Centro. So recently, we went to seek it out. We could not find it in any of the station's corridors. When a Metro employee was shown a copy of the webpage containing a photo and description of the mural, he replied that he had never seen it and that it was not in the station.

Posted by Reed Brundage at 7:53 PM