Colonia Condesa and Its Sisters - From Past to Present, Part I: Transition to the 1920's

In our last post, Seeking Restored Vitality, we reviewed the colonias, neighborhoods, established at the end of the Porfiriato, at the turn of the 19th to the 20th century. Our focus was on the question of what made for the varying degrees of success we have observed in restoring their century-old, shared heritage of stylish homes and in integrating them with all the changes they underwent in that one hundred-plus years.

Our answer was that two things seem to have made the difference. First is their proximity to the major axis of Paseo de la Reforma with its dynamic fusion of the Mexican version of a 19th century European boulevard and pedestrian promenade with the skyscrapers of the contemporary global economy. Second is their having "good bones," public streets and parks inviting people to walk, sit and enjoy what is around them. We concluded that, among the colonias we have explored, Colonia Roma Norte, with its relative proximity to Reforma and its "good bones," was most successful in this endeavor.

End of the Porfiriato, Transition to a New Epoch

With that perspective, following the (mostly) charming Álvaro Óbregon Avenue west from Roma Norte, we cross Insurgentes Avenue and begin our amble through the last of the Porfirian colonias, the one known as Condesa. Actually, the area is comprised of four colonias, or parts thereof:
Gathering this group into one neighborhood are the major thoroughfares that mark its boundaries on four sides:
Chapúltepec Woods is just to the northwest. We refer to all of them as "Condesa."

During the Colonial period, the land was a hacienda, a large estate, owned by a series of countesses, hence the name. The original mansion still stands on José Vasconcelos Avenue, in the southwest corner of Condesa Hipódromo. The U.S.S.R. Embassy throughout much of the 20th century, it is today the Russian Embassy surrounded by a high wall, which makes picture-taking a problem, even worse than the modern U.S. Embassy on Reforma.

In 1902, the owners decided to subdivide the hacienda into residential properties. The northern section was developed first as part of Roma. To the south, the Mexican Jockey Club opened a racetrack in 1910. In the 1920's, after the Revolution, it was closed, and the land was divided into residential lots.


The shape of the racetrack, however, was preserved, which accounts for the oval shape of Parque México and Amsterdam Avenue, which circles it, and for the name of that colonia, Hipódromo. We will find that this difference between pre- and post-Revolution origins in development of the colonias is reflected in their architecture.

The Two Hearts of Condesa

So let's begin with Condesa's "bones" and, extending the metaphor, its vital organs. Álvaro Óbregon leads us to a lovely, tranquil park virtually at the colonia's heart, Parque España. 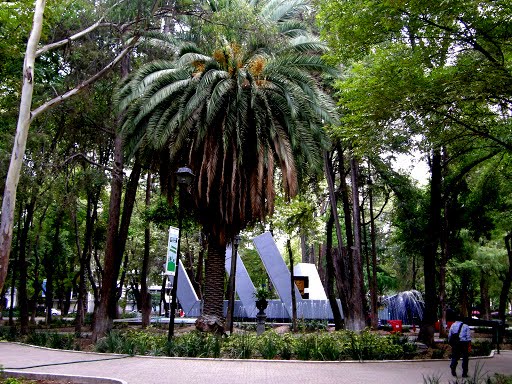 From this serene core, wide spokes of tree-lined streets with shaded camellones, medians, spread out to the north, west and south.

We will come back to Parque México, but first, let's stroll out some of the spokes, the "bones" radiating from Parque España.

The Bones of Condesa

Tuning north from where Avenida Álvaro Óbergon touches the park, we walk up Avenida Oaxaca. through what is actually part of Roma Norte.

Along the way, we pass some old acquaintances:


Amidst admittedly non-descript contemporary buildings, we have our first ecounter with a new, post-Revolution esthetic:

Oaxaca leads to a large traffic circle with a monumental statue at its center:

The Neoclassic Fountain of Cibeles [Anatolian earth goddess adopted by the Greeks and Romans] is an exact replica of one erected in Madrid, Spain, in the late 18th century. The copy, a gift of friendship from Spanish residents in Mexico City, but echoing the Colonial past, was installed here in 1980. The plaza around the statue was recently renovated and replanted with flowering plants.

Around the outside of the traffic circle are more Neocolonial and Neoclassic buildings. Housing cafes, restaurants and other shops preserve the Porfirian European ambience. 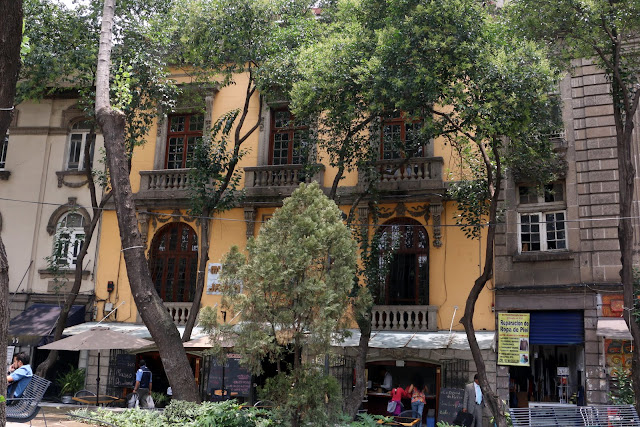 Continuing up Oaxaca to where it meets Insurgentes and Chapúltepec Avenues at the huge glorieta, traffic circle, we encounter other vestiges of the Porfiriato. They are, however, rather more down-on-their-luck than those around the Fountain of the Cibeles.

Reversing direction and heading back to the Cibeles Fountain, we angle southwest from Oaxaca and enter Calle [Street] Durango, the first of a chain of broad, shaded boulevards forming a semi-circle along the west side of Condesa, a kind of "ribcage" around the colonia's double hearts.

And running north and south of Durango, on side streets named after Mexican cities such as Valladolid and Salamanca ... 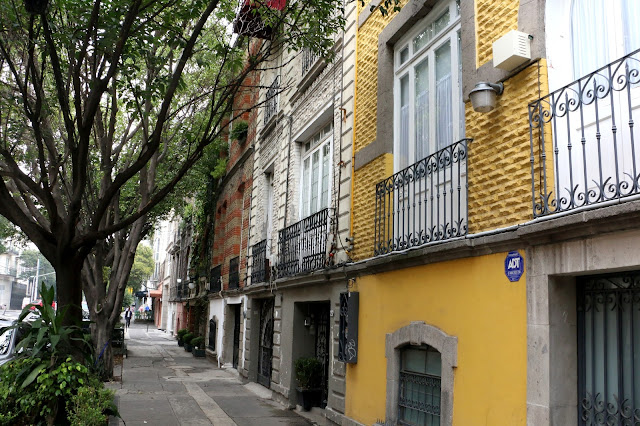 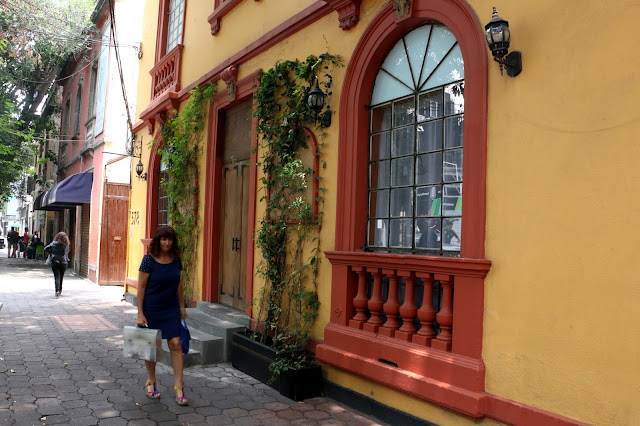 When Durango intersects with the wide Calle Veracruz, it bends more to the south and becomes Avenida Mazatlán.

Here we say goodbye to Roma Norte and enter Colonia Condesa proper.  We also find that we have crossed another threshhold, leaving behind the Neoclassic and Neocolonial of the earlier established La Roma for ... 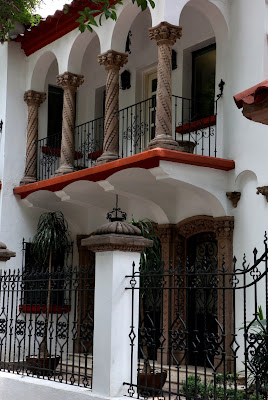 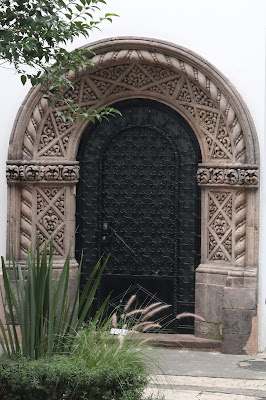 ... that nostalgic, eclectic hybrid we have met in other Porfirian colonias, California Colonial, with its spiral columns and ornate dooways. The architecture tells us that we have entered a neighborhood established in the 1920's and 30's. 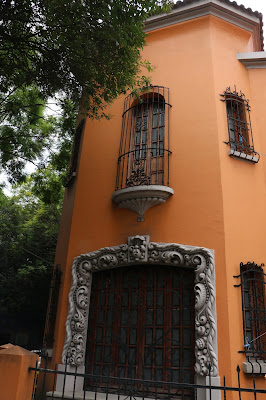 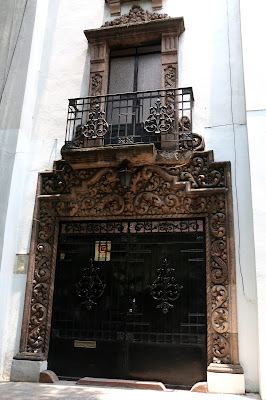 But then there appears a 1930's apartment building adopting formal Neoclassic elements. 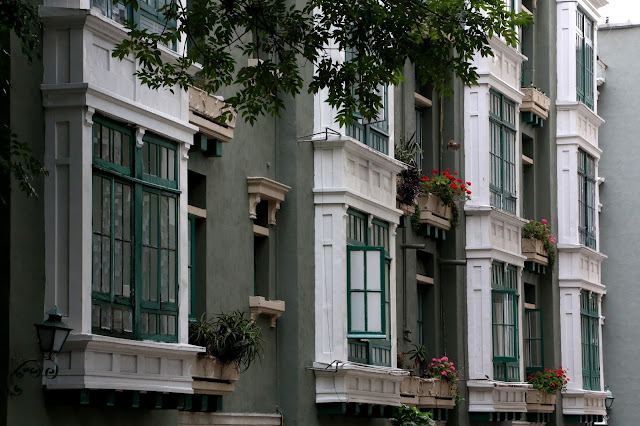 
As Mazatlán approaches the southern limit of Colonia Condesa at Avenida Michoacán, we find ouselves moving into an area of predominately utilitarian, unimaginative Post-World War II construction, where the ornamentations of pre-war fantasies are left behind.

Seeking to uncover more of the early 20th century "dreamed city" in Condesa, we turn northeast, up Michoacán, and walk towards its heart, Parque México, and our next post.