Seeking Restored Vitality: Colonias of the Porfiriato Have Varying Success

Perambulating through the various colonias, neighborhoods, initiated at the culmination of the Porfiriato epoch at the end of the 19th century, we have observed a process of architectural evolution that reflects the changes in Mexican upper-class values across the 20th century. In our last post, we revisited these changing "dreams of the city", or at least, dreams of what its prosperous enclaves should be.

In our walks, we have also seen—in well-worn, even abandoned buildings on one hand, and repurposed and restored ones on the other—how these once-imagined neighborhoods have experienced and now reflect the realities of a century of time, the impacts of economic ups and downs, with the resulting fluctuations in the income levels of their residents over the last century.

They share in common having a significant number of late 19th and early 20th century buildings in distinctive Euopean styles that give one the sense of being in some Continental city, but with tropical vegetation and plenty of sun. Thus, each colonia has the potential for, and manifests efforts to be restored, integrating its historic batiburrillo, hodgepodge, into a vital, architecturally rich, contemporary neighborhood.  However, they evidence different degrees of success in this process of rebirth and integration.

Santa Maria la Ribera, the most northerly of the group, appears to be struggling with the greatest difficulty to restore the faded beauties of its Porfirian beginnings while integrating them with post-World War II Functionalist buildings and adding the modern buildings of urban renewal.

San Rafael, the next colonia to the south along Insurgentes Avenue, seems further along in its resurgence and integration of styles. While there are still abandoned French Empire and Neocolonial buildings, others are restored into upscale condominiums that sit next to well maintained Post War Functionalist apartment buildings or across the street from contemporary, glass cube office buildings. 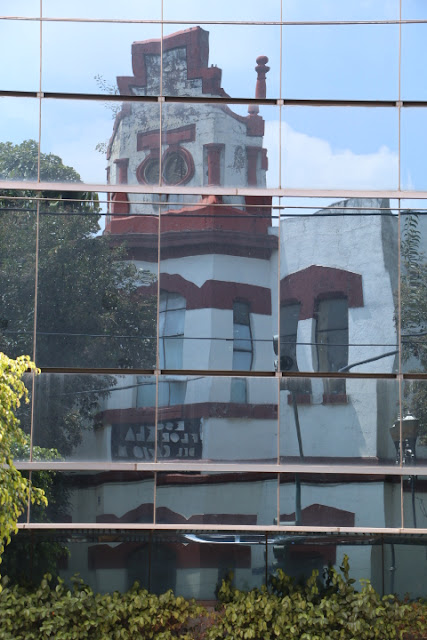 Both Cuauhtémoc and Benito Juárez, dominated as they inescapably are by the architectonic thrust of Paseo de la Reforma [Boulevard], seem to have found their individual equilibria in balancing contemporary vitality with restoration of and continuity with the past. Cuauhtémoc is more a quiet, yuppie neighborhood with a good number of California colonial homes mixed with modern apartment buildings. Sometimes, the two are literally married.

In Benito Juárez there is a dynamic, rhythmic counterpoint between Zona Rosa nightlife and quiet streets named Londres and Praha, with their Neoclassic, French and California colonial houses.

Roma Norte is probably the architectually richest of these colonias, with many well-preserved Neoclassic and Neocolonial mansions and some Second French Empire examples, To that are added the contrast of—and even combination with—the latest in glass and steel. All this is centered around Avenida Álvaro Obregon, with its enticing fusion of tranquil 19th century European promenade and bustling hip cafes. It appears to have "arrived" at a fairly well defined and vital identity that integrates its historic foundations with the contemporary style of upscale urban life.

Two factors basic to all real estate value seem to contribute to the varying levels of revival and achievement of a sense of integration across these colonias that share a common ancestry and similar raw materials. First, as they say in the real estate business, "location, location, location".

In this case, closeness to the economic and cultural power of Paseo de la Reforma is critical.


Insurgentes Avenue, the north-south axis connecting all the colonias, is less dramatic but increasingly potent economically, especially south of Reforma.

Santa Maria la Ribera is far from Reforma and separated from its southern neighbors by Ribera San Cosme, a wide, heavily-trafficked commercial avenue catering to lower middle class and working class customers. San Rafael is south of San Cosme, closer to Reforma, and its southern end is now under "development".

Cuauhtémoc's and Benito Juárez's more up-scale development is inextricably tied to their eje central, central axis, Reforma. While Roma Norte is farther south of the grand boulevard, it isn't far away, across narrow Benito Juárez and, like its northern neighbors, it is close to Chapultepec Woods, so it can feed from their attractions to add to its own potential.

The second factor that drives Roma Norte's attractiveness for restoration and development lies within itself. In addition to its large number of historic homes, it has Avenida Álvaro Obregon, with its spacious, shaded camellón, promenade, and the north-south axis of tree-lined Calle Orizaba, with plazas near each end.

These two streets, which invite people to walk, sit and relax, establish the colonia's core "X" or "skeleton". As real estate agents say of an older, somewhat neglected but still solid house: "it has good bones." Around these communal bones of streets and plazas—and the many homes with "good bones" on or near them—the body of a vital neighborhood has been reborn.

In comparison, Santa Maria la Ribera has the spacious, tranquil Alameda Park at its center, with its Romantic Moorish Revival pavillion. But while this attracts people and has drawn, in turn, a few small cafes and triggered the restoration of some buildings around it, it has not developed enough weight to drive sustained renewal. The architectually interesting Neoclassic Geology Institute on one side of the Alameda has potential, but it seems under-used and semi-forgotten. It is no Casa Lamm or Casa del Libro.

San Rafael lacks any park or boulevard to serve as a center of attraction for people traffic and provide a core around which to build a sense of coherent identity, but its proximity to Reforma seems to transmit to it both commercial and residential vitality.

The Colonia That Has It All

So Roma Norte seems to "have it all" for attracting the people and money that produce restoration and renewed vitality: a large number of handsome historic buildings with "good bones", proximity to major urban axes, Reforma and Insurgentes, and, an internal "skeleton" of inviting public spaces for gathering and enjoying what the neighborhood has to offer: a revitalized and reimagined "dream of the city". 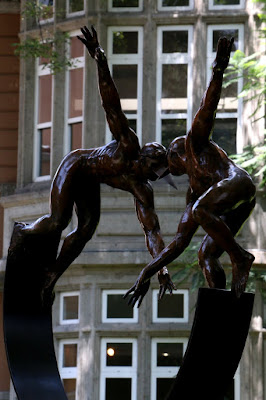 Posted by Reed Brundage at 4:46 PM