Chapultepec Castle: The U.S. Army vs. Santa Anna and The Boy Heroes

My search in Mexico City for physical remnants of the country's 19th century history, particularly the period from the War for Independence to the Porfiriato (1810-1876), led me to a castle on a hill, Chapultepec Castle. I had seen it from below in Chapultepec Park, but a 19th century castle in Mexico didn't initially pique my interest. As a castle evidently built after Mexican Independence, it seemed an historical anomaly. But as I sought answers to the missing pieces of the urban history puzzle, it turned out to be a key.


In 1775, Viceroy Bernardo de Gálvez ordered the construction of a stately home for himself at the highest point on Chapultepec Hill. Construction began the same year. However, on November 8, 1786, the viceroy died suddenly. The Spanish Crown ordered the building to be auctioned. There were no buyers. In 1806 the building was finally bought by Mexico City's municipal government. It remained empty throughout the War for Independence and the early years of Mexico's new government.

Sometime between 1833 and 1840 (different sources give different dates), the Military Academy, which had been founded in 1823 at the end of the War for Independence, was moved to the Castle. This move sets the stage for the Castle's major role in Mexican history.

In 1833. Antonio López de Santa Anna, originally an officer in the Spanish Army, came out on top of a series of coups d'état among caudillos, military strongmen who had fought in the War for Independence. He was named president by the Congress. Initially, he allowed some liberal reforms; namely, reducing the powers of both the Army and the Catholic Church. When conservatives rose up against these reforms, Santa Ana switched sides (as he did a number of times during his lifetime), disbanded Congress, suspended the Constitution of 1824 and imposed the Seven Laws by which he centralized power in the presidency.


The Seven Laws included replacing the "sovereign" federal states with centrally controlled "departments" on the French model. Several states and provinces rebelled against this power grab. Among these was the state of Coahuila y Tejas, which Santa Anna had divided into two departments: Coahuila in the south; Tejas in the north. In October 1835, acting under the leadership of Stephen Austin and Sam Houston, settlers in Tejas who had arrived from the United States initiated the Texas Revolution. 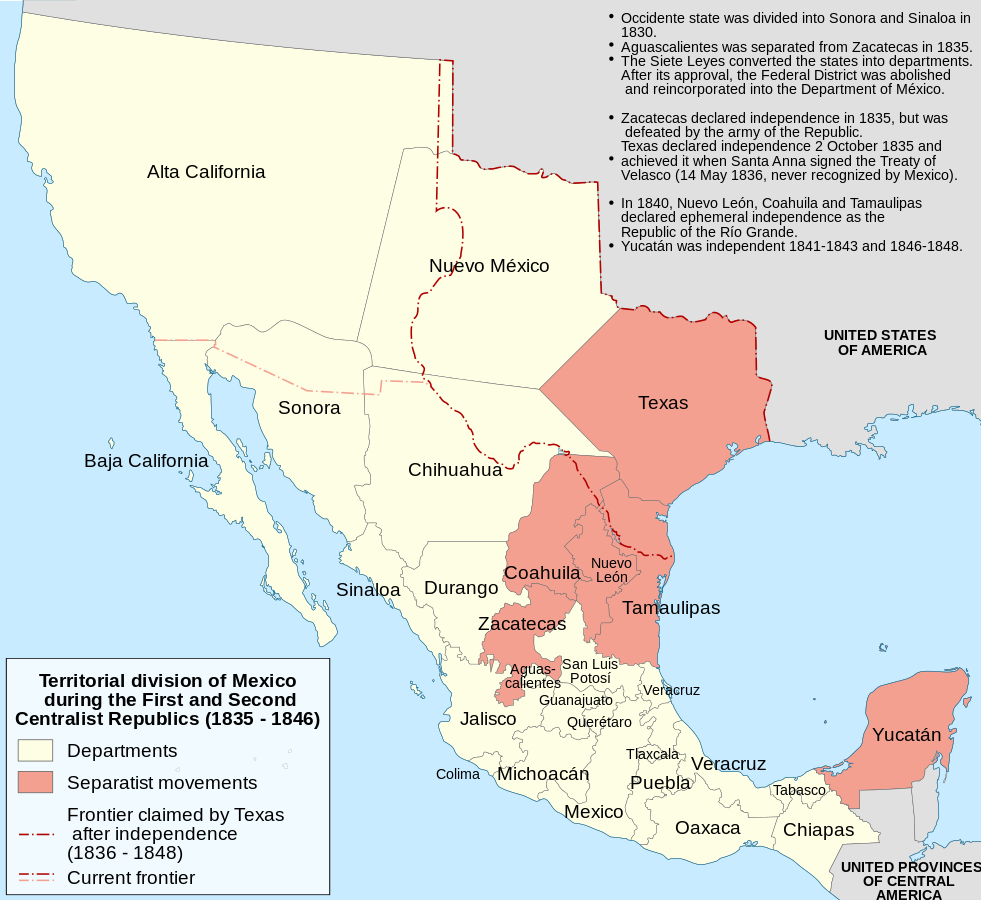 Santa Anna vowed personally to retake Texas and led his Army of Operations into Texas in February 1836. After initial victories against the rebels at Goliad and the Alamo, he was defeated on April 21 at the Battle of San Jacinto by troops led by Sam Houston. Captured, Santa Anna was forced to agree to the independence of Texas, which became the Republic of Texas.

However, the Mexican government rejected the "Treaties of Velasco" and threatened to go to war if the United States annexed Texas. After being held captive in Washington, D.C., Santa Anna was returned to Mexico in 1837. By 1839, in a context of internal chaos, Santa Anna again became president. In 1844, a revolt against him led Santa Anna to go into exile in Cuba.

Meanwhile, on the U.S. side there was also resistance to annexing Texas, since it would provoke war with Mexico. But more importantly, it also raised the issue of upsetting the delicate balance between slave and free states achieved with the Missouri Compromise of 1820. Annexation became a central issue in the 1844 presidential election.

When pro-annexation Democrat James Polk won, lame-duck President John Tyler convinced an equally lame-duck Congress to accept the annexation of Texas and make it a state. The legislation was signed by Tyler the day before Polk took office on March 4, 1845.

Polk was an aggressive proponent of expanding U.S. territory west, all the way to the Pacific, which meant confronting Mexico, whose territory extended north through California to the Oregon Territory.

The border of Texas as an independent country had not been settled. Based on the Treaties of Velasco, the Republic of Texas claimed land up to the Rio Grande [Rio Bravo], but Mexico claimed the border to be the Nueces River, northeast of the Rio Grande. While the two rivers come close together as they approach the Gulf of Mexico, upstream, it is quite a different matter.

President Polk claimed the Rio Grande boundary and in July 1845, he sent General Zachary Taylor with 3,500 U.S. troops to camp on the Nueces River. With that "stick" in hand, Polk then offered Mexico a "carrot". In November he sent a secret mission to Mexico City with an offer to buy Upper California and New Mexico, which included present-day Arizona, for $25 million dollars. Mexican authorities refused.

Polk then ordered Taylor to move his troops across the Nueces River into the disputed territory. Taylor set up a makeshift fort, Ft. Texas, later Ft. Brown, on the banks of the lower Rio Grande River, opposite Matamoros in Tamaulipas, Mexico. On April 25, 1846, Mexican General Mariano Arista led 2,000 Mexican cavalry across the river and attacked a 70-man U.S. patrol under the command of Captain Seth Thornton. In what became known as "The Thornton Affair", sixteen U.S. soldiers were killed.

Claiming that "American blood" had been shed "on American soil," on May 11, President Polk sent a message to Congress asking for a declaration of war against Mexico. On May 25, war was declared.

To try to stop the U.S. invasions, Mexican authorities allowed Santa Anna to return from exile to lead the Mexican Army.

On April 18, the opposing forces met at Cerro Gordo near Xalapa, Veracruz. Scott outmaneuvered Santa Anna's defensive positions and defeated his troops. The Mexicans retreated toward Mexico City. On May 1, the city of Puebla surrendered. The way to Mexico City was open.

On August 19 and 20, battles were fought between Scott's and Santa Anna's forces at Contreras and Churubusco, just south of Mexico City. With the Mexicans defeated, the capital city was next.

On September 12, 1847, U.S. troops attacked Chapultepec Castle, the last obstacle to their entrance into Mexico City. It stood


The Battle of Chapultepec takes on near mythic proportions in both U.S. and Mexican history. For the U.S., it is enshrined in the words of the Marine Hymn, "From the Halls of Montezuma...". For Mexicans, it is sanctified by the sacrifice of the Niños Heroes, the Boy Heroes.


Chapultepec Castle was defended by Mexican troops under the command of Nicolás Bravo, who had fought in the War for Independence. His forces included cadets from the Military Academy. The number of cadets present has been variously given, from 47 to a few hundred. The greatly outnumbered defenders battled General Scott's troops for about two hours before General Bravo ordered retreat.

However, as the story goes, six cadets refused to fall back and fought to the death. Legend has it that the last of the six, Juan Escutia, leapt from Chapultepec Castle wrapped in the Mexican flag to prevent the flag from being taken by the enemy.


The bodies of the six youths were buried on the grounds below the Castle. One hundred years later, in 1947, their remains were exhumed and on September 27, 1952, they were re-interred at the Monument to the Boy Heroes which stands below the Castle of Chapultepec.


In any event, the United States had conquered Mexico. On February 2, 1848, the Treaty of Guadalupe (named for the Villa of Guadalupe, also the site of the apparition of Our Lady of Guadalupe) was signed between U.S. and Mexican officials. Mexico accepted the loss of Texas and ceded half its territory to the United States, including what are now the states of California, Nevada, Utah, Arizona, New Mexico and parts of Colorado and Wyoming. The U.S. paid Mexico 15 million dollars and assumed any Mexican debts to U.S. citizens.


Santa Anna once again went into exile, first to Jamaica and then to Colombia. In 1853, conservatives called him back to be president to oppose liberal, democratic forces. In 1855, he was overthrown by these forces. Santa Anna again fled first to Cuba; later, he lived for awhile on Staten Island in New York.

Upon implementing democratic reforms limiting the powers of the Church and Army, the liberals, who included Benito Juárez, were, in turn, attacked by conservative forces in the so-called War of Reform (1857-61). But that is another chapter, which will lead us back to Chapultepec Castle.
Posted by Reed Brundage at 8:30 PM