The buildings and neighborhoods of a city are the physical manifestations of the historical, social and economic realites of a society or nation. Hence, they reflect its ongoing cycles of growth, decline and renewal; creation, destruction and reconstruction; living, dying and rebirth.

In Mexico City this universal fluctuation between vitality and decay is more evident and more precariously balanced than, perhaps, it is in other places. We have seen this dynamic manifested in the Centro Histórico, where today's shopowners and street vendors hustle to make a living amidst the faded grandeur of Spanish colonial palaces, and we touched on it in México Agridulce, Bittersweet Mexico.


For some fifty years (1821-1875) after the War for Independence, which itself dragged on for eleven years (1810-1821), the potential leaders of the new nation were embroiled in political power struggles, battling foreign invaders or one another in civil wars. El desorden cost lives and livelihood, preventing much population growth and economic development. Hence, there was little building in Mexico City; it remained confined to the original Spanish colonial core.

However, the economic stability of the Porfiriato—the thirty-some-year dictatorial reign of Porfirio Díaz from 1876 to 1911, with its opening to foreign businesses and the growth of domestic business—triggered pressures to expand the boundaries of the city and provide new residential neighborhoods for the nouveau riche outside the original city boundaries of the Spanish colonial Centro Histórico.

Thus, colonias such as Santa María la Ribera, San Rafael, Roma and Condesa were built as planned subdivisions of hacienda farmlands on the drained bed of Lake Texcoco between the Centro Histórico and the Lake's western shore, in what is now Delegación Cuauhtémoc. The area east of the Centro Histórico remained wetlands and remnants of the lake. Since Aztec time, it had been the site of canals and landings for canoes and boats supplying the city; hence, it was an early commercial center. The later expansion into the eastern lake bed was likewise commercial.

The original large homes built in the new colonias were in French Second Empire, Spanish neo-colonial and neo-classical styles popular in the latter part of the 19th century. By imitating the life-style and fashions of their Western European counterparts, they represented the wealth of the new business class, the bourgeoisie.

San Rafael, immediately south of Santa María la Ribera, perhaps best portrays the cycles of growth, decay and rebirth that have characterized Mexico City through the 20th century into the 21st. Its roots lie in Aztec and Spanish colonial times. Part of the area was a small island of fishermen, across which the Aztecs built a causeway from Tenochtitlán to Lake Texcoco's western shore and the city-states of Tlalcopan (now Tacuba) and Azcapotzalco. The Spanish, of course, made their mark by building a church, which still stands.

The Euopean style homes built at the end of the Porfiriato and those built—curiously, in the same styles—after the Mexican Revolution (1910-1917), are now in various states of disrepair and repair, ranging from abandonment to total restoration into upscale private homes and condominiums. 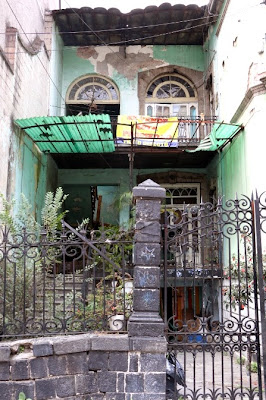 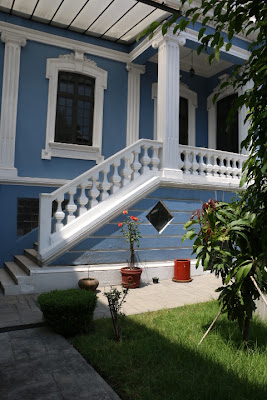 These late 19th and early 20th century buildings are surrounded by others ranging across the 20th century to the 21st, from Art Deco to post-modern glass boxes.


Renewal and restoration are both revitalizing, but which is your preference? I know mine.