We did it! We made it to a fiesta in Delegación/Alcaldía Cuajimalpa, the last of the sixteen delegaciones/alcaldías comprising Mexico City that we have visited!

Before the Spanish arrived, the Tepaneca of Azcapotzalco (which we just visited, also for the first time) had established villages in the mountains — dedicated mostly to cutting firewood and making charcoal for sale to pueblos in the Valley of Mexico below.


The fiesta that we attend on a Sunday in early August is that of San Lorenzo Acopilco. We are extremely fortunate that one of our regular taxi drivers, Sr. Sánchez, who has transported us to many fiestas around the city, is quite willing to undertake the hour-long drive from our base in Coyoacán, in the center of the city, up into the mountains and to seek out San Lorenzo Acopilco. Between my Google map and Sr. Sanchez's knowledge of the route to Cuajimalpa, we arrive in the delegación without difficulty.

However, it is a little more difficult to find San Lorenzo Acopilco. It sits at the southern end of the populated portion of the delegación. Like other delegaciones that rise into the mountains, the southern portion of Delegación/Alcaldía Cuajimalpa is forest preserve. Also, the road signage isn't clear, so Sr. Sánchez stops and asks people by the roadside for directions. At one point, it means learning which road of a Y to take. It is the one to the left, which leads to a larger highway that eventually goes down the mountains to Toluca, the capital of the adjoining State of Mexico.

Soon we enter the tall, dense pine forest and seem to have left civilization behind. Just as we are wondering if we missed the turnoff for San Lorenzo, we see a good-sized sign saying "Acopilco" and pointing to a narrow road running uphill and deeper into the forest. (Afterward, we wish we had taken a photo of this roadway through the evergreens. It was difficult to believe we were still in Mexico City.)

Not far up the hill, we start to encounter houses. We have entered San Lorenzo, but we still have to find Avenida de las Flores, the street leading to the church. People along the roadside tell us we have just passed it, so we turn around and quickly come to the avenue — actually a narrow street typical of old pueblos and barrios. We head further uphill until we come to an intersection where — as is typical for fiestas — the road ahead is closed.

So we pay Sr. Sanchez, along with a sizeable tip for the quite herculean task he has undertaken to get us here and because he has a long, passengerless trip back to his company's taxi sitio (stand) in Coyoacán. We also thank him profusely for making it possible for us to finally get to Cuajimalpa and the fiesta of San Lorenzo Acopilco.

The Churches of San Lorenzo Acopilco


Walking a short distance uphill, we come to the town plaza. Several rows of folding chairs are lined up in front of a kiosk which is decorated with a floral portada and occupied by statues of the Virgin Mary and Jesus. A statue of San Lorenzo (St. Lawrence) stands to one side. Evidently, this is where the fiesta Mass is to occur.

Behind the kiosk, we can see the top of a church dome, as well as the bell tower of a second church. They are evidently in an atrio (atrium) about a half-story below the town plaza. To the right of the kiosk is a low bandstand where a wind band is enthusiastically playing to entertain the few people in the plaza. 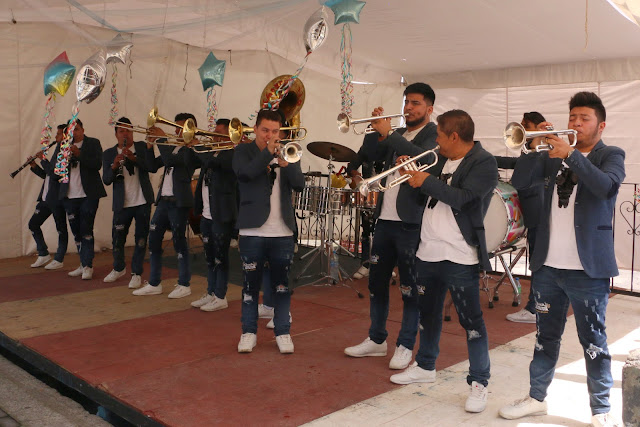 Further to the right, we see a ramp leading down to the churches. A house — evidently the church offices — sits at the bottom of the ramp, next to the second church. We are disappointed to find the entrance to the atrio cordoned off with chicken wire, so it cannot be entered.

At that moment, a woman coming from the office approaches to tell us both churches are closed because they were severely damaged in the major earthquake of September 2017. We express our sorrow for the damage, which we have encountered in other churches, and our regret that we are unable to see inside either one.

Later, in research, we learn (from Spanish Wikipedia) that the first, smaller chapel was built only fifteen years after the Conquest, under the direction of Don Vasco de Quiroga, about whom we know much from our time living in Pátzcuaro, Michoacán. He was a member of the Second Audiencia, a commission sent by King Charles I (Holy Roman Emperor Charles V) in 1530 to govern Nueva España, thus replacing a badly functioning First Audiencia whose leader, Nuño Beltrán de Guzmán, turned into a conquistador and ravaged the western part of Nueva España, including the Purépecha people of Michoacán, searching for gold the inhabitants did not have.

De Quiroga, a church lawyer, was immediately struck by the abuse the indigenous people were enduring from the conquistadores who, under Hernán Cortés' initiative, were seizing their land as encomiendas, land grants. The native people residing on these lands were forced to work for the encomenderos, the grant-holders. Quiroga left the Audiencia in 1532 to begin to set up "hospital" towns, refuges modeled on St. Thomas More's book Utopia (published in 1516), where the indigenous could live safe from abuse. The first hospital town he established was in the Sierra de las Cruces which he named Santa Fe (Holy Faith). The pueblo still exists not far from San Lorenzo. The chapel here is only four years younger than Quiroga's first in Santa Fe. Unfortunately, the one in Santa Fe has been destroyed, but we still want to visit the pueblo someday.

Subsequently, Quiroga was made a bishop and sent to Michoacán to try to restore an orderly, autonomous life for the Purépecha people who had been ravaged by de Guzmán. There, he established another Santa Fe del Lago on Lake Pátzcuaro, and several other towns into which the indigenous were gathered. He had the residents of each town assigned a craft with which they could make a livelihood, as their lands had been taken as encomiendas. He is still highly revered by the Purépecha of the pueblos he established. They affectionately call him Tata Vasco, Papa Vasco. Each pueblo still makes the craft he assigned them. We have many of their artesania (criafts) in our apartment, reminding us daily of the Purépecha and Tata Vasco.

Returning to the plaza and passing the church office, we see an announcement posted on its wall listing fiesta activities. We have been looking for this. It tells us that a cuadrilla (cuah-DREE-yah) de arrieros, a team of mule drivers, is to perform in the plaza at 10 AM.

We encountered arrieros for the first time not long ago at three fiestas, two in Tlalpan, also in the mountains, and the other in Coyoacán, where they were visitors from Tlalpan. The cuadrillas of mule drivers were evidently centered in these mountain pueblos, as they were on the trails from Mexico City to other cities in Nueva España and continued to be the means of commercial transportation for four hundred years, until the 20th century, when they were replaced by trucks and highways.

The announcement also tells us that a procession has begun at 9 AM on the outskirts of the pueblo to welcome other pueblos coming to attend the fiesta Mass. It is now winding its way through the streets for three hours before arriving in the plaza for the noon Mass. We will await its arrival.

While we are waiting for the arrieros to arrive, we watch the construction of the castillo, a "castle" tower on which elaborate fireworks displays will be ignited after dark as the climax of the fiesta.

Construction of the castillo is fascinating. As tall as they may be, they are always built the day of the fiesta and always finished in time. Even more fascinating, they are built from the bottom, using a power winch to lift wooden box frames that are stacked one upon another and simply tied together. As the winch lifts the growing tower of boxes ever higher, a worker slides one frame after another underneath. 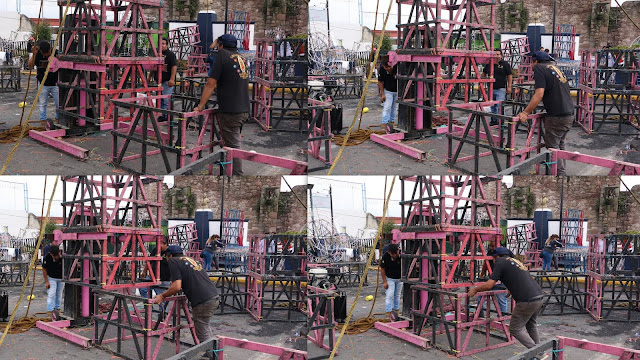 Soon, and suddenly, the cuadrilla of arrieros enters the plaza, led by men on horseback. The horses are another reminder that parts of Mexico City are still rural and retain traditions from before our contemporary times. 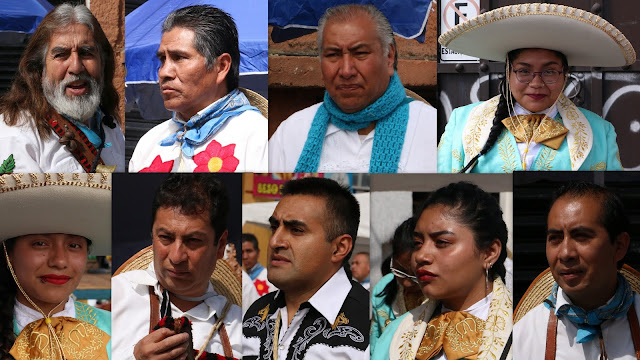 Fiesta in the Pueblo's Main Street

As the arrieros engage in preparing the atole and noon is approaching, we decide to walk from the plaza along the pueblo's main street, a typically narrow calleja (cah-YEH-hah), hoping we will run into the procession that is out there somewhere in the labyrinth of similar streets. 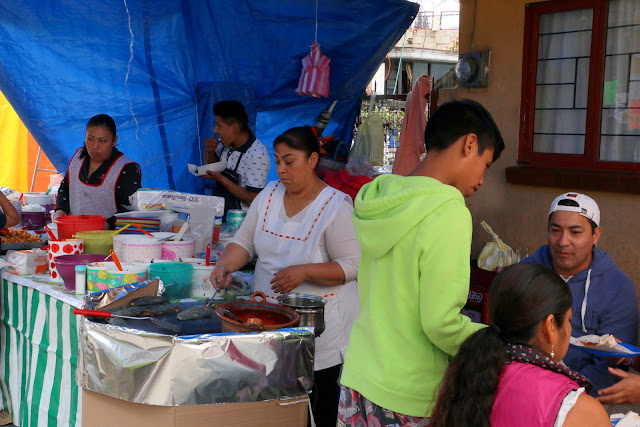 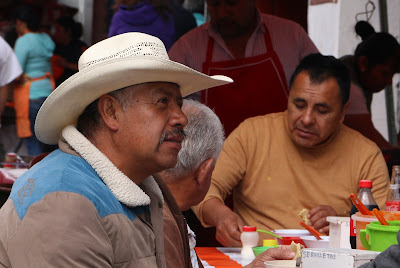 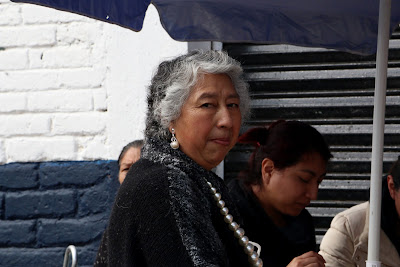 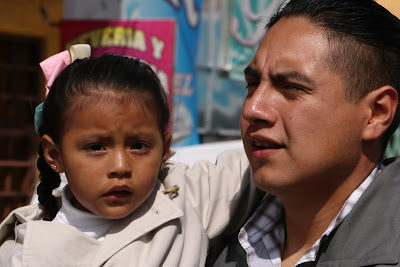 We stop at one of the puestos selling pizza and buy a slice, with pepperoni. As we are eating, we hear from a nearby side street the sound of cohetes, the rocket-style firecrackers used to announce the progress of the procession. So we hurry to the corner just in time to meet the procession as it arrives at the main street. Fortunately, it stops to rest, so we are able to rush ahead in order to get into position for the best photos. 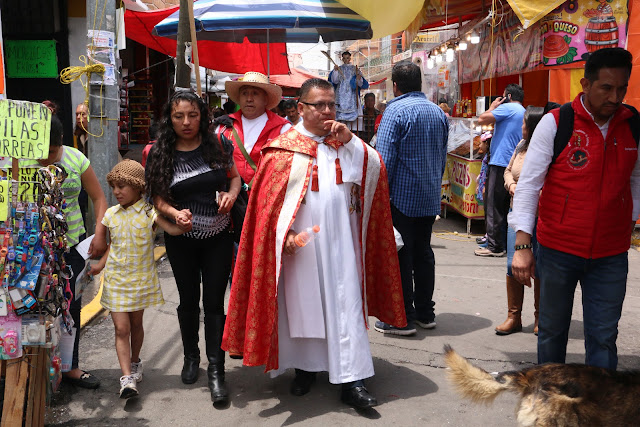 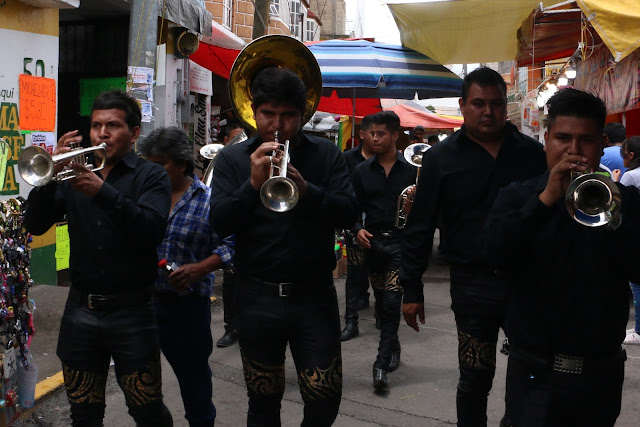 The procession moves on to the plaza for the celebration of the Mass. By this time, we are tired but very satisfied. We have sought for a long time to make it to Delegación/Alcaldía Cuajimalma, the most distant and difficult to reach from our home in Coyoacán and, therefore, the last of the sixteen delegaciones/alcaldías we have visited. Today, finally, with the help of driver Sr. Sánchez, we have succeeded in arriving.

San Lorenzo Acopilco, surrounded by evergreen forests, reminds us very much of pueblos in the similarly forested Meseta Purépecha, the Purépecha Highlands, in the state of Michoacán, where we lived for three years before moving to Mexico City. Furthermore, we are awed that here, in San Lorenzo Acopilco, totally unexpectedly, we have also encountered one of the first chapels built by Don Vasco de Quiroga before he moved on to seek to protect the Purépécha people in Michoacán. We feel that, in some way, we have come full circle, both from the beginning of our ambles to the originally indigenous pueblos in the sixteen delegaciones/alcaldías of Mexico City but also back to the realm of Tata Vasco.

Now we just need to find a taxi to take us back to Coyoacán. A bit nervous, being so far from home, in an isolated pueblo in the mountains, we ask a couple who are selling food on the street if there is a taxi sitio nearby. They smile and reply, "¡Oh, sí! Todo derecho." | Oh, yes, straight ahead, at the bottom of the hill where the main street ends. So, relieved, we walk down the hill and there, at the intersection of the main street with the road that comes in from the highway, are a number of taxis waiting. We ask the first driver if one of them will take us all the way to Coyoacán, wondering whether they will want to go that far or, perhaps, just take us to the main west-side bus station called Observatorio where we know we can get another taxi. He says, "Sí" and that it will cost us 200 pesos, about $10. Sr. Sánchez's meter had charged us more than 300 pesos, so this is a bargain. He points us to one of the cabs. We greet the driver and tell him where we are going, get in, and we are off for home in the center of the City and the modern world.