Every once in awhile, a visit to a new museum just plain knocks our socks off! It happened to us recently. Similar to our experience at the Frida Kahlo Museum in Coyoacán, stepping through the gate took us into another world.

In 1962 the Mexican philanthropist, art collector and businesswoman, Dolores Olmedo, bought the rundown, sixteenth century, 8-acre property in Xochimilco known as Hacienda La Noria. She immediately set out to restore its buildings and gardens—an undertaking uniquely suited to Dolores' capabilities as businesswoman, art connoiseur and collector.


Upon her death in 2002, the estate of Dolores Olmedo was dedicated to making her collections available to the public:


A flock of splendid peacocks parade through the gardens. When a male displays, onlookers gasp with excitement and delight. 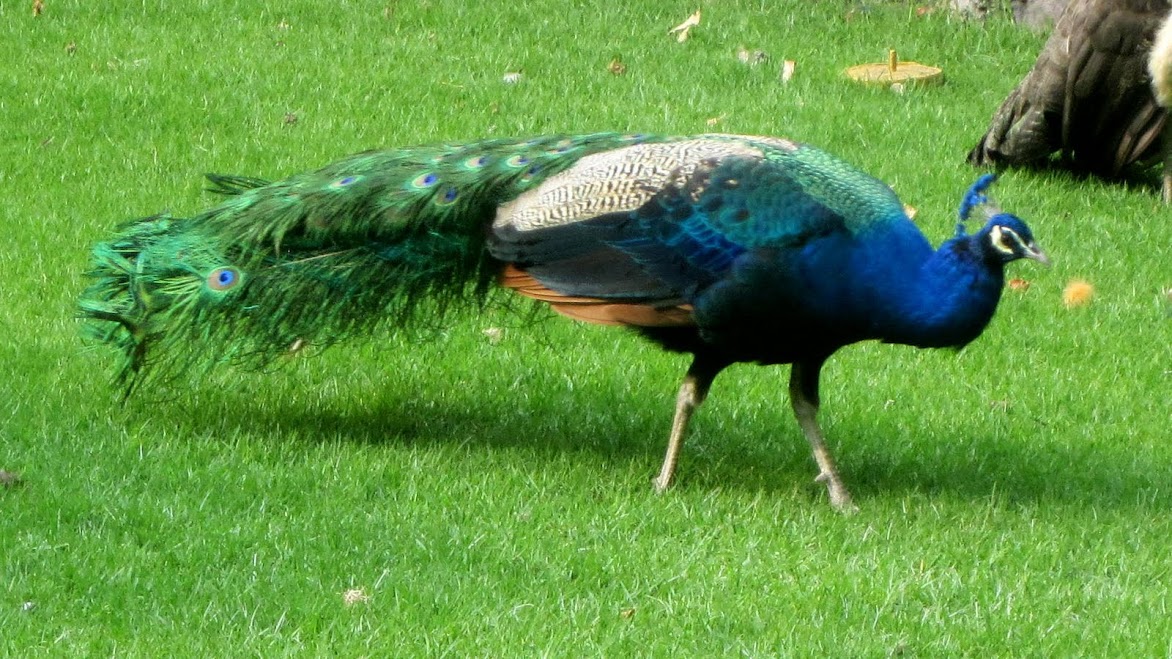 In a large, comfortable pen, about a dozen of the once nearly extinct breed of dogs, xoloitzuintles (sho-loy-tzu-EEN-tles),  Mexican hairless hunting dogs, make their home. They move across well-worn paths. When they catch sight of something, they stand stock still...at attention.


A bronze statue of one proud male adorns their pen. Until one of the actual dogs moved, I thought they were all statues. I doubt I'm the only one who has made this mistake! Their color is similar to the bronze statue, and when they stand still...not a magnificent muscle moves. Remarkable!


The Museum also sponsors cultural events, including Sunday afternoon concerts held outside. We heard an excellent band of young people playing Mexican music. In addition to marimba and mandolin, the band also had four psalteries—a stringed instrument held on the lap. The psalteries gave the music a sound that we in the U.S. might describe as 'mountain' music. The result was absolutely delightful! The audience sang along with many songs.


Born two years before the onset of the Mexican Revolution (1910-1917), Dolores Olmedo was a real personaje (character)—businesswoman, philanthropist, art collector. Her mother, widowed by the untimely death of Dolores' father, supported her family as an elementary school teacher. Like many others, the family suffered through food shortages as the Revolution ground on and on—an experience that undoubtedly marked Dolores for life.

After the Revolution, the arts in Mexico enjoyed a renaissance with a distinctly foreign flavor  reflective of new ideas arriving from the United States and the capitals of Europe. These foreign influences also had a profound effect on Mexico's cultural and scientific mentality, giving rise to a new generation espousing new values focused on social injustice, strategies for building a society based on a nascent nationalism, and conceptualized in terms of progress and development.

Dolores studied art at the Academy of San Carlos—the same school that had been attended by the 'Big Three' of Mexican Muralists: Diego Rivera, José Clemente Orozco and David Alfaro Siqueiros. She also studied music at the National Conservatory.


About 1924, sixteen-year-old Dolores met Diego Rivera while he was working on his murals at the Secretariat of Public Education. It was primarily a friendship based on their shared artistic interests, but Rivera also asked Dolores' mother for permission to have Dolores pose for him. Permission granted, she posed more than a hundred times for the artist, whom she held in the highest esteem.

As with most of Rivera's friendships, theirs was to have its highs and lows. At one point, Dolores distanced herself from Rivera for several years, but in 1955 she and Rivera renewed their ties and were practically inseparable until his death two years later. Aware that he would soon die, during this time the great muralist named Dolores trustee of his estate.

During this time, Rivera, himself a renowned collector of precolombian art, guided Dolores through several important acquisitions. Her collection of 600 objects is on exhibition at the Dolores Olmedo Museum in Xochimilco. Rivera also guided Dolores in the purchase of several paintings both by Frida Kahlo and by himself. These paintings are important exhibits at her museum.

Meanwhile, in 1930 Dolores had met the Englishman Howard S. Phillips, founder and editor of Mexican Life, a magazine focused on the arts and  tourism. They were married in 1935. Although they eventually divorced amicably, during their marriage Howard and Dolores moved in Mexico's elite circles of the arts and culture.


In order to support her family, Dolores turned her talents to the business world. Her business instincts were superb. She identified and turned to her advantage the construction boom that accompanied the country's post-Revolution development agenda.

With great difficulty, she borrowed money to purchase a brick factory. In a canny move, she formed a partnership with the owner of the brick factory next-door to hers, the German Heriberto Pagelson. Together they purchased additional brick factories, which became enormously profitable.

Similarly, Dolores allied with an adobe maker, again capitalizing on the country's construction boom. Needless to say, her success was extraordinary at a time when few Mexican women participated in entrepreneurial activity, let alone achieve such success in the male-dominated construction industry!

The Museum's web site is excellent, including a description in English.  For the best photos, go to the Spanish site where, below the GoogleMap, is a series of photos. Click to access, then Scroll Down one row—voilá!—superb photos of the Museum grounds. Here's the link:  Dolores Olmedo Museum.

Excellent description in English with link to Spanish: http://www.myhero.com/go/hero.asp?hero=Dolores_Olmedo_Patino