Original Villages | Xochimilco: Santa María Tepepan, Part I - Drama of the Christians vs. the Pagans

The Mother of the Son of God Replaces the Mother Goddess


More than a year ago, when we began our exploration of Mexico City's original villages—and their churches and related religious fiestas as the remaining visible signs of what has become known as the Spiritual Conquest, i.e., the transformation of indigenous culture into a Spanish Catholic one—we knew that our first visit had to be to Tepeyac, the site of the Basilica of the Virgin of Guadalupe.

Situated a few miles north of Centro Histórico—hence of the former city of Tenochtitlán—the Basilica, with its related churches and chapels, embodies the synthesis of indigenous and European Catholic beliefs and rituals. This synthesis is most vividly expressed in the vision of the indigenous peasant, Juan Diego. The peasant's vision of Our Lady of Guadalupe took place on the hill of Tepeyac, the site of a Mexica temple to the mother goddess, Tonantzin. The morena, brown-skinned lady spoke in Nahuatl, the region's main indigenous tongue, giving Juan Diego—now the beatified San Juan Diego—the task of convincing the Catholic Bishop to have a chapel built for her on the place where the indigenous temple had stood before the Spanish destroyed it. Her appearance and request represented the Virgin's special choice of Mexico as her people and thus, of the bonding of Catholicism and the indigenous peoples of the land.


The association of the Virgin Mary with indigenous sites related to the ancient mother goddess is not restricted to Tepeyac and the Basilica. One of many others is a similar hill in the south of what is now Mexico City, in the Delegación [Borough] Xochimilco, which incorporates the indigenous altepetl, city-state of Xochimilco and its surrounding pueblos on what was the south shore of Lake Xochimilco. There, on a hill called Tepepan, "the place at the top of the hill" in Nahuatl, there once stood another temple to Tonantzin. Shortly after the Spanish Conquest, the Franciscans built a chapel there to the Virgin.

In 1526, Friar Peter of Ghent, the first Franciscan to come to Nueva España, erected the chapel. Later in that century, Friar Francisco Millán built the church on the same site.  Although the church is dedicated to St. Mary of the Visitation (commemorating Mary's visit to Elizabeth, pregnant with John the Baptist, after the Annunciation of Mary's own pregnancy), its primary commemoration is of Her Assumption into Heaven, which is celebrated on August 15.


Welcome to St. Mary of Tepepan


So on the Sunday morning following August 15, we engage Andrés, our favorite taxi driver, to take us to Tepepan. Turning off the main road that leads into the center of Xochimilco, we climb a narrow cobblestone street up to "the place at the top of the hill".

A portada, a decorative arch at the top of a ramp, tells us we have arrived. Bidding Andrés hasta luego, until the next time, we leave the cab and head up the ramp.

The main events of the day of a fiesta usually begins with a procession of the saint being honored. Recently, we participated in a procession that lasted two and a half hours in Colonia Santo Domingo in Coyoacán, so we think twice about joining this one, especially through a pueblo on the side of a hill crisscrossed with cobblestone streets!

At that moment, our eye is caught by a small group of men dressed as Spanish caballeros, knights or gentlemen of the Renaissance period, and another group dressed as Moors—i.e., the North African Muslims who ruled much of the Iberian Peninsula from 711 C.E to 1492. From the beginning, Iberian Christians fought to expel them. This Reconquista, Reconquest, was finally completed under Queen Isabella and King Ferdinand, who celebrated by sponsoring Christopher Columbus' voyages west across the Atlantic.

We have seen these Spanish caballeros at two other fiestas, where we learned they are called Santiagueros, Warriors or Knights of St. James. At those fiestas, they only enacted a brief dance and "sword fight". Here, with the Moors present, something else appears to be in the offing.

Dance of the Moors and Christians


Santiago, St. James, is the patron saint of Spain. One of the twelve disciples of Jesus, he is believed to have come to Spain from Roman Judea to preach the Gospel and found the Christian Church, separate from St. Peter and Rome. He returned to Judea and was subsequently martyred.

Centuries later, when Christians were driving the Islamic Moors from the Iberian Peninsula, St. James showed up riding a white horse and enabled them to win a major battle. He then became Santiago Matamoros, St. James the Moor Slayer. Centuries later, he is believed to have shown up in what is now Mexico to help Cortés defeat one of the indigenous tribes that opposed him.

The religous orders that were called to Nueva España by Cortés brought with them the Dance of the Moors and the Christians as a dramatic way to repeat the message that Cortés had first announced to the indigenous tribes he met:


either submit to the Spanish crown, the true King of the World, and accept the true God of the Catholic Church, and His Son, the Savior Jesus Christ, or be slaughtered.

So Cortés presented the original peoples with a stark choice: life or death.

We have read about the Dance of the Moors and Christians, but never seen it performed. When we lived in Pátzcuaro, Michoacán, we witnessed the Purépecha Dance of the Moors, but there was no representation of a confrontation with Christians. So our choice of whether or not to follow the procession is clinched. We stay in the atrio, excited that we will now see a version of this old drama. 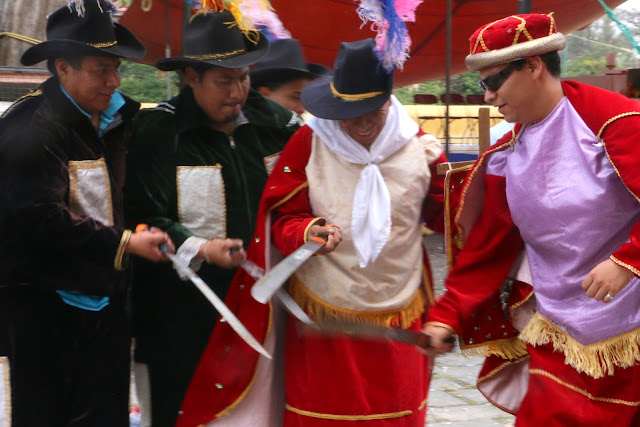 The message of the drama is clear:


Christianity is the True Faith and the Spanish Crown is its True Protector. To this, all "pagan" faiths and political realms must submit, be they Islamic Moors from North Africa in 1492 or the Aztecs and other peoples of "New Spain" a short thirty years later.

This is the Conquest, both military and spiritual.


The Dance (or Drama) of the Moors and the Christians is immediately followed by the return of the procession from the streets of Tepepan. Mass begins and is celebrated underneath a huge tarp covering much of the atrio. It is the current, living demonstration of the fulfillment of the Spiritual Conquest. 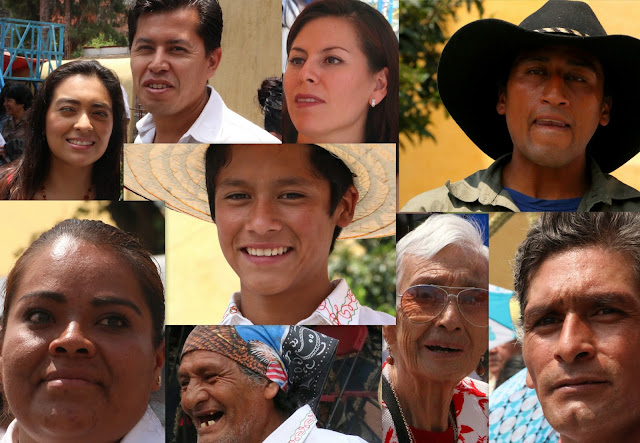