In our first post on David Siqueiros, we wrote that in the early 1920s, after the Mexican Revolution, he took part with Diego Rivera and José Clemente Orozco in creating the first works of the Mexican Mural Movement in the National Preparatory School (formerly the Jesuit College of San Ildefonso), but that he did not finish the mural he began there.

In 1925, after the election of Plutarco Calles as President, replacing Álvaro Obregón, José Vasconcelos—the Secretary of Education who had sponsored the artists' work and who had wanted to become president—was replaced in his post. The painters were dismissed. Siqueiros went to Guadalajara, where he could find work because he knew people from his participation there in the war.

His artistic and political passions then led him, over the intervening years, to Russia, South America, the United States and active duty in the Spanish Civil War. Whenever he returned to Mexico City, he would become active in the Communist Party and get jailed for various acts of protest. As a result, he was not to leave his own visible artistic mark on the city until the 1940's. (See our page: David Siqueiros: Twentieth Century Odysseus)

Returning to a Beginning

At the time we wrote the post, we had read that Siqueiros' first work, in San Ildefonso, was not accessible to the public, as it was in a "back stairwell" in an unoccupied part of the building. Subsequently, while visiting San Ildefonso to show its murals to friends, we learned that that part of the building was now the Museum of Light, under the direction of the National Autonomous University of Mexico (UNAM), as is the main San Ildefonso Museum. But at that point, we had moved on to other topics in our Ambles, so we did not pursue visiting the Museum of Light.

Recently, we were able to redress that omission. While visiting Centro to explore another episode in the Mexican Mural Movement previously unknown to us (and which we will be writing about), we realized that we were very close to San Ildefonso, so after completing our new investigation, we went to the Musuem of Light, not knowing whether it would lead us to the Siqueiros mural that lay somewhere within.


In the entry passageway, we ask the ticket taker if the Siqueiros mural is accessible. She replies, "Yes, if you buy a ticket. It's in the stairwell." We happily and excitedly pay the few pesos charged for admission and head into the patio to find the stairwell.

As soon as we start up stairs, we are confronted by the first sign of Siqueiros' presence hanging above our heads. 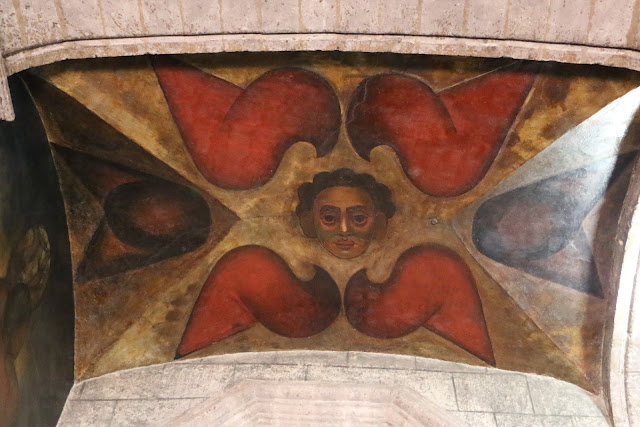 The bold color and forceful figure speak at once of the artist's eye and hand. Continuing upward, we then meet Siqueiros' artistic and ideological vision in full force.

A very human, very muscular winged goddess, traditionally of Victory, foreshadows Siqueiros' post-World War II mural entitled 'Democracy', in Bellas Artes. We have read that the artist referred to it as The Elements. To us it is a direct expression of his life-long focus on liberation of the suppressed underclasses.


We turn the corner of the stairwell and look up.

We are definitely puzzled by the composition above us but not surprised, given that we have seen Siqueiros' final work, the Cultural Polyforum, completed nearly fifty years later, in 1971. Here in San Ildefonso, he first undertook the challenge of using a three-dimensional space to surround his viewer with his vision. His March of Humanity, in the Polyforum, is the culmination that effort.


So we try to decipher the various components. Fortunately, a small plaque on the wall helps us.


Two themes are certainly central to the artist's lifetime work: Liberty and the oppression of Workers. We will try to figure out what the "Myths" might be.

The Call to Liberty


In the right-hand corner of the stairwell's left wall, the figures in the Call to Liberty are hard to make out due to the low light and the viewing angle. However, the forceful nude male figure, with his large, strong arms and legs, holding a child in one hand and a pole in the other, although flatter and more static, is certainly the forefather of later males created by the artist.


Two unfinished portraits stand to the side of the male figure. What their relationship is to the Call to Liberty isn't evident, but they are nonetheless interesting portraits. 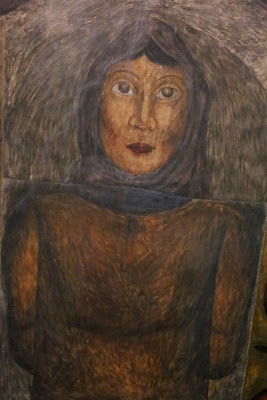 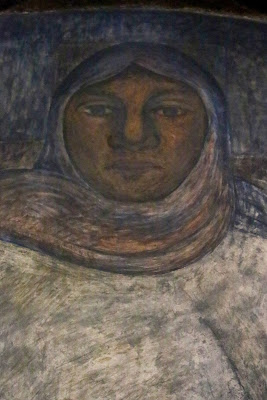 The two portraits are markedly different in style: one is a face of fine lines, narrow width, wide eyes and relatively light skin; the other of thick lines, round-faced, somewhat veiled eyes and darker skin. Whether Siqueiros intended a reference to racial and social differences in Mexico (our hunch), or was just experimenting with styles remains a mystery.

The Burial of the Sacrificed Worker

The right wall of the composition also presents a puzzle, at least on initial viewing. 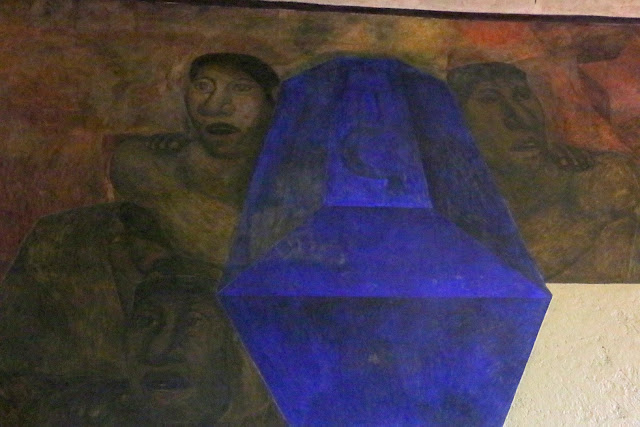 Three men hold an iridescent blue object. The image is far above the viewer and in low light, so we can´t make out the nature of the object. The title should have been clue enough, but it takes our later blowing up and lightening up of our photo to see: it is a coffin. On the top, barely visible, are a hammer and sickle, symbols of laborers and farmers, and their alliance via Communism. Siqueiros makes no secret of his political beliefs and revolutionary passions.

We are also struck by the artist's use of cerulean blue. It was used extensively by José Clemente Orozco (San Ildefonso, third floor) in his paintings of ordinary Mexicans in the midst of revolutionary chaos, evidently to express a still-existing hope. But we haven't seen it used by Siqueiros in any of his other works, which are dominated by aggressive red and black. 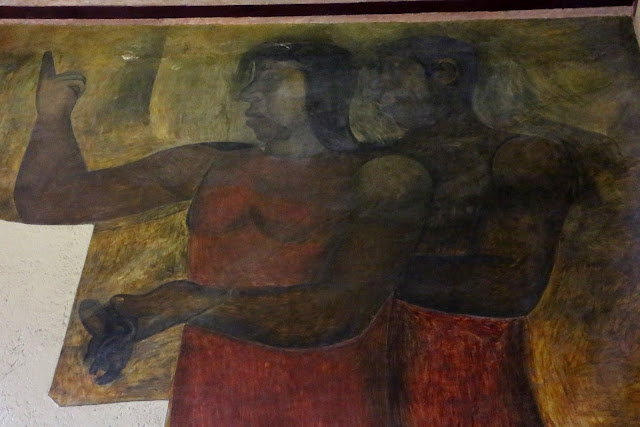 In the right-hand corner stand a woman and man painted in Siqueiros' favorite red. The woman holds one hand erect, in an apparent gesture of defiance. In the other, she holds broken chains, the symbol of liberation from oppression. 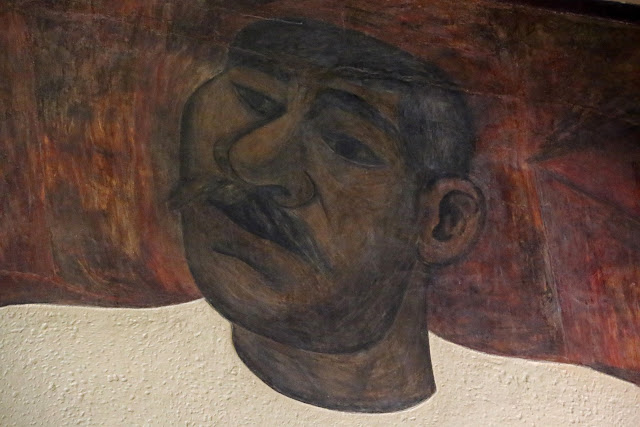 In the middle of the wall is a single portrait, powerful in its directness and simplicity. The portrait is of a man—by his features clearly an indigenous Mexican campesino, traditional peasant farmer. We wonder what Siqueiros might have had in mind for the rest of this empty middle section.

We now turn to try to decipher The Myths section of the mural on the center wall. 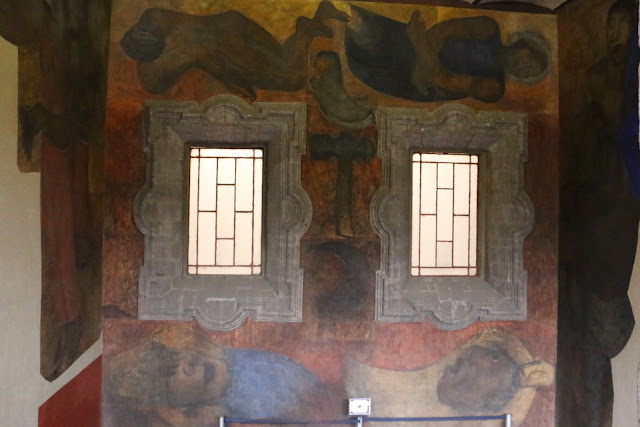 Two large human figures and one small one seem to float at the top. At the bottom, two other figures lie on their backs, mouths agape. In between the two windows is Siqueiros' clear profession of faith, the Hammer and Sickle, symbols of the uniting of laborers and farmers via the Communist vision (myth?) of liberation from capitalist domination. 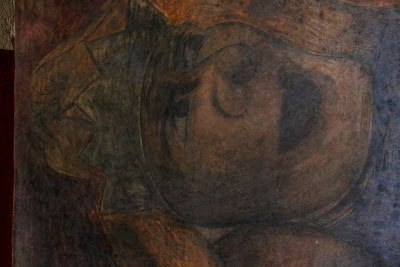 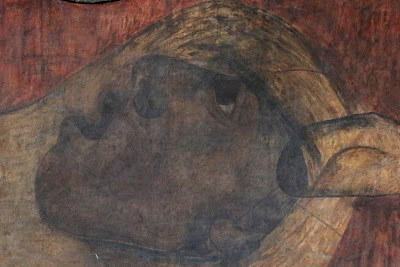 The left-hand figure is clearly a king, now deposed, lying helpless on his back. The right-hand figure is another puzzle. From the heavy, dark features he would appear to be indigenous, but why is he then overthrown like the king? The covering on his head may be a hint. Its tan color reminds us of the battle attire of the jaguar warriors of Aztec/Mexica fame who, together with eagle warriors, were the elite soldiers protecting the empire and those who ruled it—the tlatoanis like Moctezuma the Younger and Cuhuatémoc, who were defeated by Cortés.

If our interpretation is correct, the artist is depicting the overthrow of two empires, the indigenous and, later, the Spanish.

Floating above are three figures. On the right is a morena, dark-skinned, woman, clothed in cerulean blue. Her arms are folded as if she were holding an infant; on closer inspection, she is evidently wearing a halo. Is she Siqueiros' image of the Virgin of Guadalupe—that synthesis of Spanish Catholicism and indigenous identity that is literally the vision (or myth for non-believers) that unites Mexicans from both sides of the Conquest?

The image may also refect the Virgin's counterpart in Mexican "mythology"—one who elicits great ambivalence from Mexicans, Malinche. She was the indigenous woman who served as Cortés' translator, thereby betraying her indigenous world by opening its door to its conquistadores. In counterpoint, by bearing Cortés' child, she began the "mestization", the mixing of indigenous and Spanish blood that resulted in the Mexican people. If the woman is seen as Malinche, then we know the meaning of the child floating between the woman and the naked, face-down indigenous man on the left side. As such, he is not a vision (or myth) of hope.

We are reminded of José Clemente Orozoco's much more direct and, therefore, more powerful representation of this conflict between and mergers of races, of peoples from the opposite side of an ocean. It lives in another stairwell in San Ildefonso.

We are also reminded that Siqueiros took up this primal Mexican theme (myth) at the end of his artistic life, at the Polyforum.

As for the row of steel bits filling the ceiling, that is another puzzle for us. Given the Communist frame of reference, perhaps Siqueiros was alluding to the industrial, capitalist economy and the related concentration of power that exploited and suppressed workers.

So, in another, previously inaccessible part of the ex-Colegio San Ildefonso—what in the 1920s was Mexico's first government-run high school—we gain a fragmentary glimpse of the artistic and revolutionary vision and the graphic style and palette of David Alfaro Siqueiros. All the aspects of his later works are foreshadowed here: bold, molded muscular figures projecting towards the viewer; predominant colors of red and black; themes of liberation of the common folk from oppression by those in power; and the attempt to master a three-dimensional space in order to surround his audience with this vision.

We leave very satisfied that we have finally been able to see this first work of the master. We have a feeling that we have come full circle in our encounters with Siqueiros' tumultous life and dramatic works, connecting the later flowering with the first sprouts. And we are grateful to UNAM (National Autonomous University of Mexico) for the opening of the Museum of Light in this previously neglected but grand space, making possible this encounter and fulfillment.

More about how the Museum of Light came to be in San Ildefonso will be shared in a subsequent post, which will also focus on an obscured beginning of the Mexican Mural Movement.
Posted by Reed Brundage at 11:05 AM