Seeking a Fiesta of the Holy Cross

May 3rd, on the Catholic religious calendar, is the Feast Day of Santa Cruz, the Holy Cross. It celebrates the cross on which Jesus the Christ was crucified (we recently witnessed the Passion Play of Iztapalapa). Because of His Resurrection, the cross has been given a meaning beyond pain and death, transformed into a symbol of life and liberation from death.

May 3rd also coincides with the mid-point of Spring and, in Mexico, with the return of the rains that ceased in the preceding Fall. It thus also marks the beginning of the planting season (think the pre-Christian May Day celebrations in Europe).

So, continuing our exploration of the original indigenous villages of the Valley of Mexico that we began a year ago, we check our version of the religious calendar, which we have cross referenced to each delegación (borough) of the City and its respective colonias, pueblos and barrios, to see which ones will be celebrating the Feast of the Holy Cross. We find that there are two pueblos in Xochimilco dedicated to la Santa Cruz. Xochimilco is one of the delegaciones that most maintains their indigenous roots and customs, so fiestas there are likely to be rich in tradition and full of vitality.

Google Maps helps us locate the church of Santa Cruz Acalpixca, located on the eastern side of the delegación. Various research paths (many Mexican pueblos and churches have Facebook pages, a modern form of maintaing traditional communal bonds and identity) do not lead to locating the church of Santa Cruz Xochitepec, on the west side, so we decide to investitgate Acalpixca (Ah-kahl-PISH-kah). As fiestas generally last some days before or after the primary date, depending on where it falls in the week, and include the nearest weekend, we assume the fiesta of Santa Cruz will still be in progress on the Sunday following May 3rd. So, when that morning arrives, we head for Xochimilco, using a combination of taxis and the Light Rail.

Exiting the Xochimilco Light Rail station, we hail a cab and tell the driver our destination. He responds, "Oh, yes, the feria (fair) in Santa Cruz", and we head east from the center of the delegación. After various turns, we end up on a four-lane street with a camellón (tree-filled median). Soon he tells us that if we get out at the next corner and walk down the side street, we will reach the church and the fair.

Following his instructions, we head down the narrow side street. Almost immediately we spot signs of the fair, booths selling "fair bread" and other foods, and mechanical rides.


As is often the case with such pueblo fiestas, the plaza and the church are virtually hidden behind puestos (stalls) selling food and mechanical fair rides. We spot the church steeple and the wall of its atrio (atrium) and search for the entrance.

Entering the atrio, we encounter a row of three large crosses, made from substantial poles and freshly painted in blue, lying on the walkway. They are covered with wide white cloths forming a 'V' shape and numerous other strips of brightly colored cloth. A group of men seems to be preparing them for some activity. They all wear T-shirts identifying them as volunteers for the fiesta.

To the right side of the church a Mass is in progress in a covered outdoor space, reminiscent of the outdoor masses held by the Franciscans and other orders before they could replace their first small chapels with larger churches. 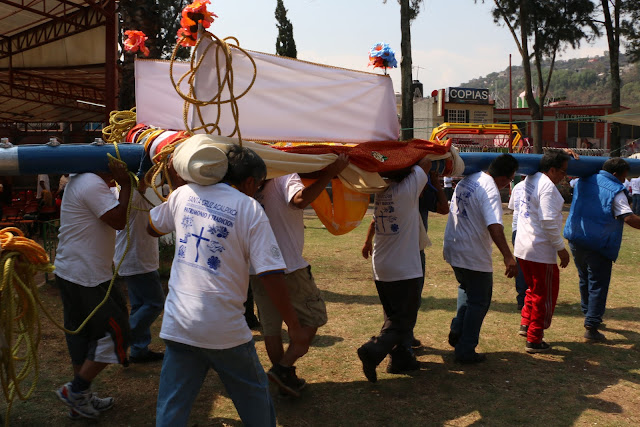 Walking back across the atrio towards the church, intending to explore it and the Mass being celebrated, we are surprised to see three more large crosses lying in a corner of the atrio. They are painted green instead of the blue of the first three, and wear brightly patterned 'Vs' in place of white ones. 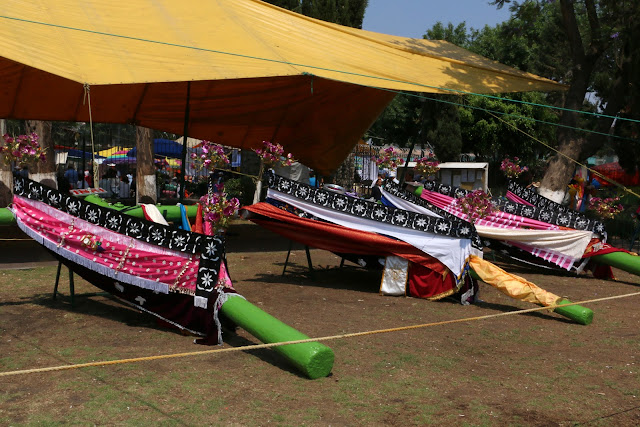 Back in  front of the church is another surprise. Aztec dancers are blessing one of the crosses with copal incense. We can hear the drumming of such dancers, whom we know from past Ambles, are frequent participants in such fiestas. It is coming from the plaza and we will have to check it out later. 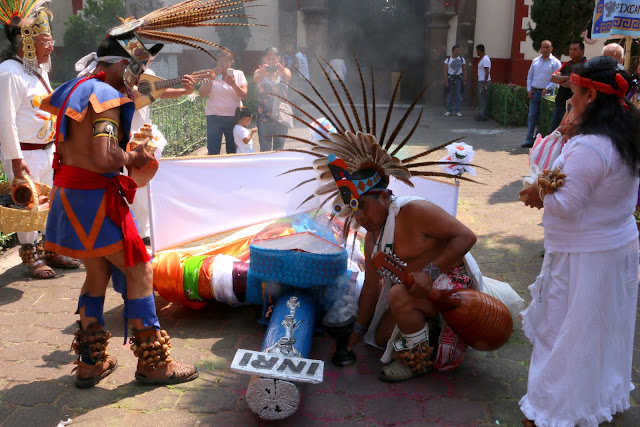 A Sanctuary in Bloom | A Congregation Celebrating

We enter the church. Typical of patron saint fiestas, it is filled with fresh flowers. 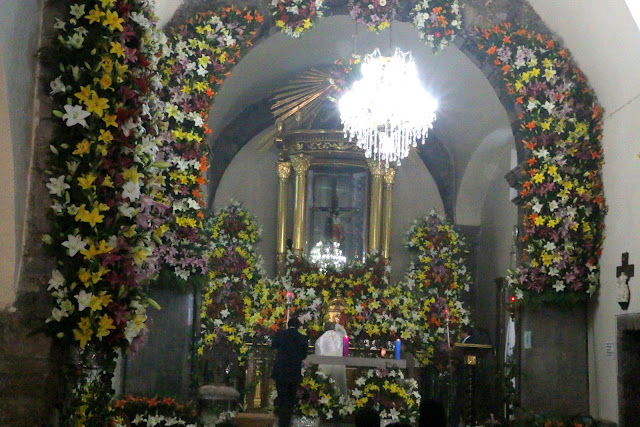 The sanctuary is small, with a single file of pews. We can see why the Mass is being held outside.

The Mass being celebrated is very upbeat and contemporary, with folk-style songs sung by a group of youth and children and enthusiastically joined by the congregation. 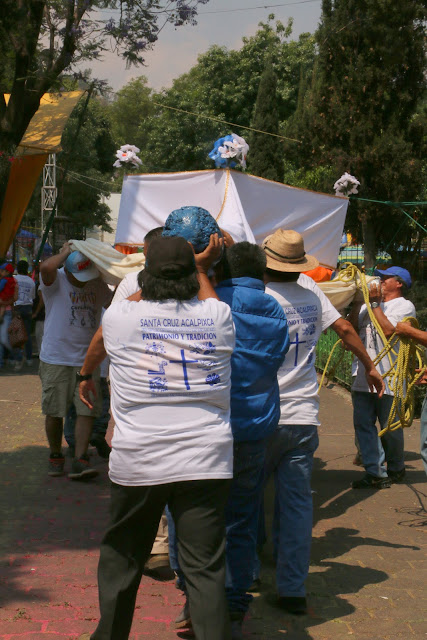 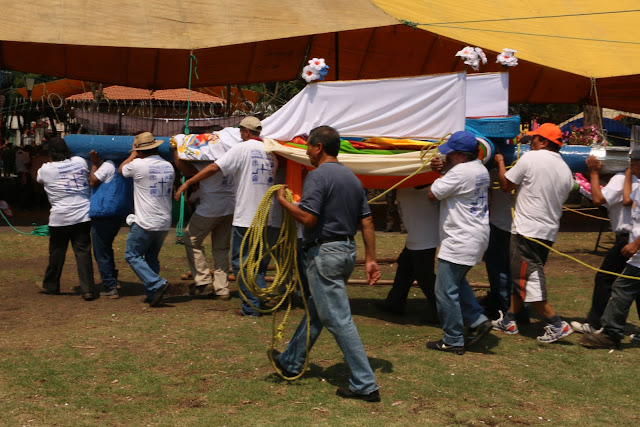 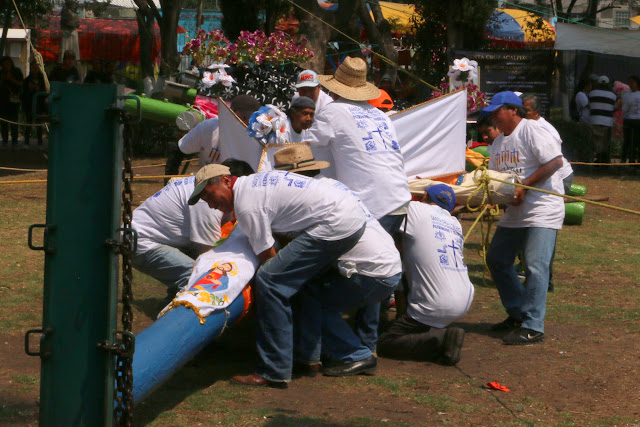 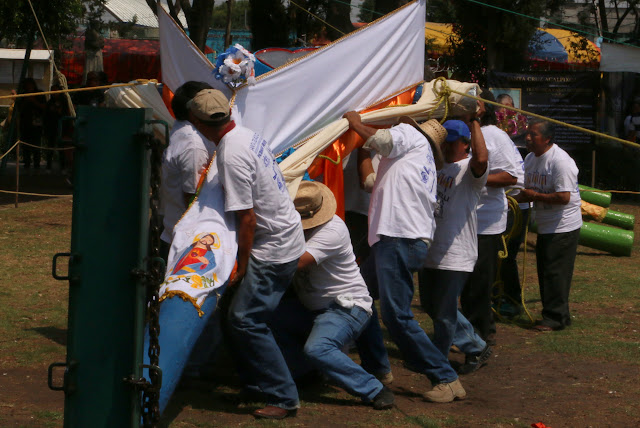 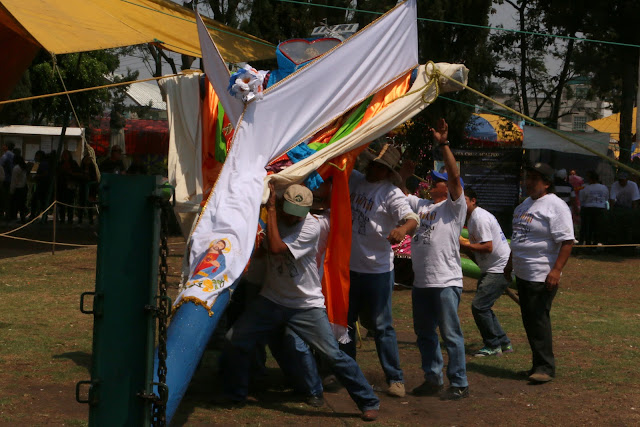 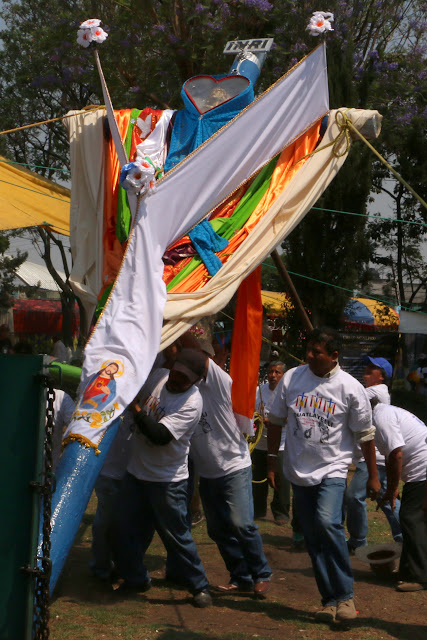 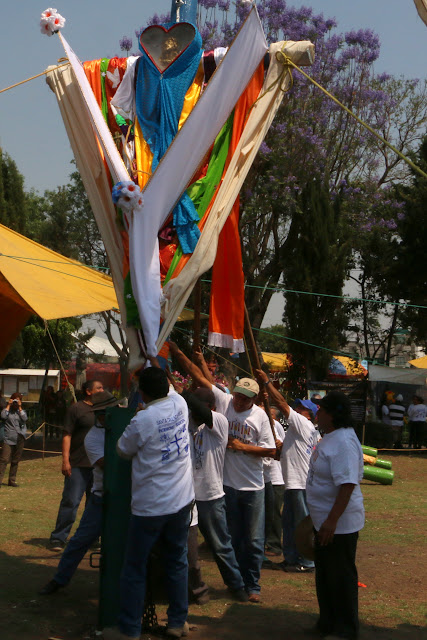 We understand the three crosses are a recollection that Jesus was crucified between two thieves. But we wonder why the doubling to six. So we ask one of the men assisting. He explains that the three crosses that have been raised in the atrio will be carried, next Tuesday afternoon, up the hill we can see from the atrio and raised there, where they will stay until next Easter, like guards watching over the pueblo. The second three, which rest on the ground, will be carried to a site in the pueblo and raised there.

Mexican pueblo fiestas are always something of a three-ring circus, with multiple activities happening simultaneously. Out on the plaza, drums have been beating all the time we have been witnessing the raising of the crosses and the outdoor Mass. In the plaza, people in Aztec dress are intently, energetically dancing to the rhythm of the drums. Other groups await their turns. 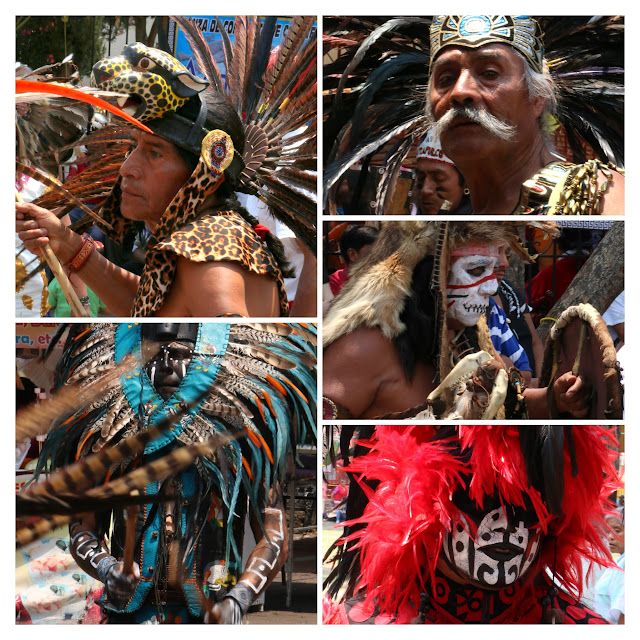 We have seen and written about these Aztec dancers in other of our Ambles in original villages. Although they may seem a modern attempt to get in touch with ancient but weakened indigenous roots, we have learned that they have a continuous history from the time of the Spanish Conquest, when Franciscans and other religious allowed the natives to adapt their dances and drumming to Christian themes so they could be incorporated into the celebrations of the new faith. Such adaptation was part of the key principal of compromise in the Spiritual Conquest in order to gain "heathen" acceptance of Spanish Catholic Christianity. (Wikipedia)

Today, we notice dancers wearing a style of attire different from the more or less bare-skinned style we have seen before. Seeking an explanation, we approach a couple of their members. 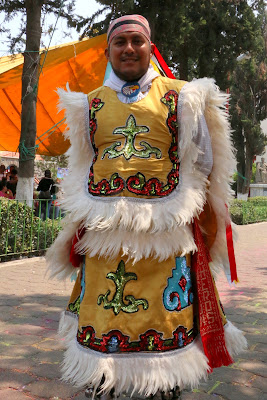 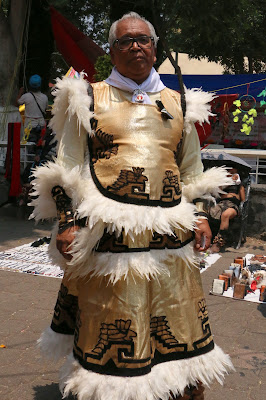 They generously and happily explain that they are members of la Corporación de Concheros Sociedades Unidas, the Corporation of United Societies of Concheros, a group that has existed in Mexico City since the 1920s. This jibes with what we have read about such groups, that they were introduced from the more rural provinces (states) into Mexico City after the Revolution as a manifestation of the revolutionary goal of reviving the indigenous basis of Mexican culture and society.

They tell us that their attire, which consists of a long skirt and a kind of vest, trimmed with fur, is the dress the Franciscans allowed the indigenous to wear, covering themselves with European imposed modesty, but still expressing indigenous symbolism and tradition.

The two men also tell us that their families have been involved in the concheros since the group's beginnings. Señor Encarnación Rodriguez (pictured on the right) says he is the fifth generation of his family to belong. We comment how we always see children involved in the dance groups, and he replies that his grandchildren are dancers, making the seventh generation. All this is said with very evident pride. They also want us to know that, like many Mexican community groups, they have a Facebook page, and we can communicate with them through it.


As if there weren't already a great variety of traditions being expressed in this fiesta, at this point another one comes dancing across the plaza and enters the atrio. 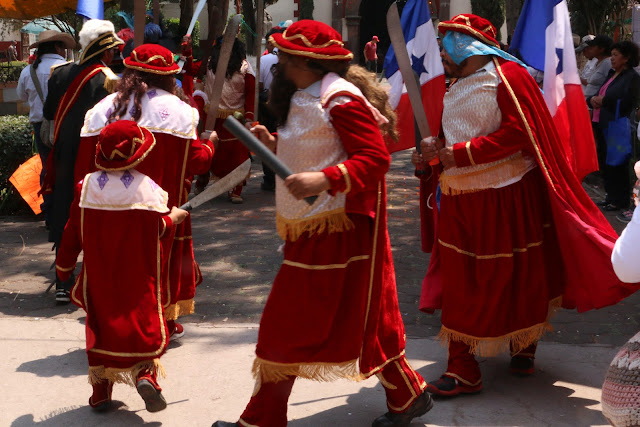 So when they stop to rest outside the church, in our usual manner, we approach one of them and ask, "What do you represent?"

He replies, "We are Knights of Santiago (St. James)." The light goes on in our brain: "Of course!" Santiago, St. James, is the patron saint of Spain. One of the disciples of Jesus, he is believed to have come to Spain from Roman Judea to preach the Gospel and found the Christian Church, separate from St. Peter and Rome. He returned to Judea and was martyred.

Centuries later, when Christians were driving the Islamic Moors from the Iberian Peninsula, St. James showed up and, riding a white horse, enabled them to win a major battle. He then became Santiago Matamoros, St. James the Moor Slayer. Even more centuries later, he is believed to have shown up in what is now Mexico to help Cortés defeat one of the indigenous tribes that opposed him. 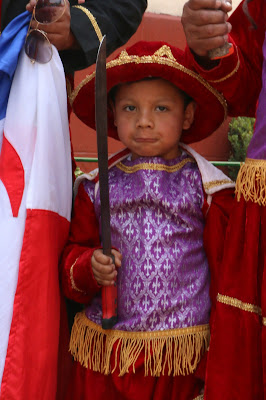 Congregation of the Holy Cross of Acalpixca


While we are both puzzling and marveling over the Knights, cohetes, rocket-style fire crackers that are an essential part of fiestas, start to be set off. 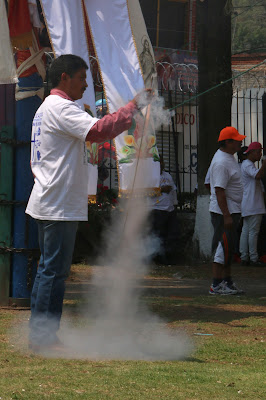 They are announcing the approach of yet another personaje (primary character) in the drama of the Fiesta of the Holy Cross.


The arrival of the Crucified Christ marks the beginning of another Mass in the open sanctuary. This time the space is full to the brim with the faithful. Again, the songs are folk-style and the congregation sings and claps enthusiastically. We are reminded of the vitality of Black churches in New York. 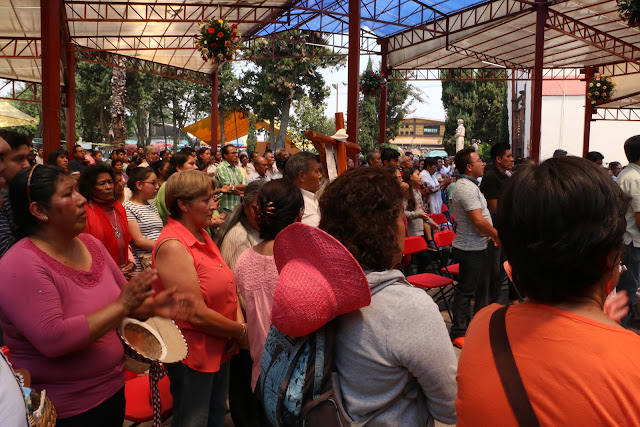 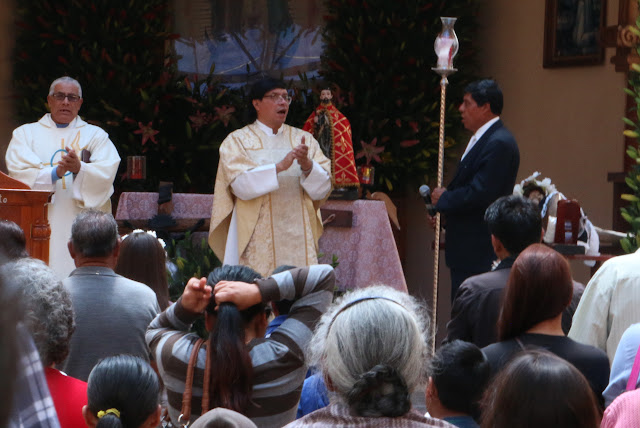 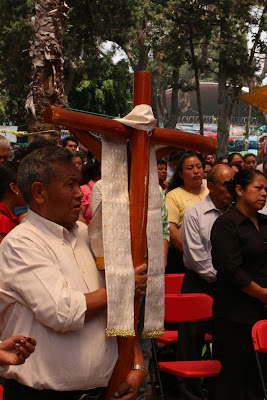 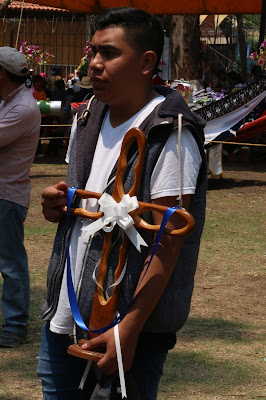 
As always in our Ambles, we are most interested in the people we encounter. 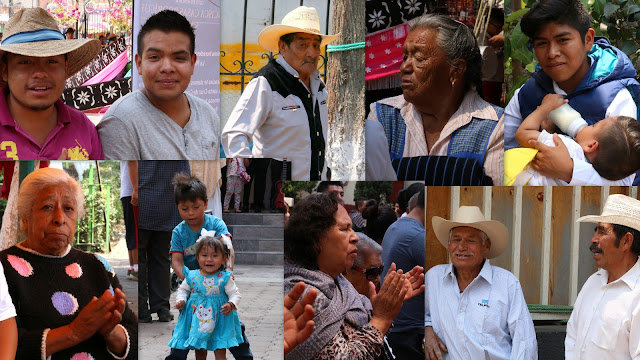 Once Again | Vitality of  Faith and Continued Communal Identity

So another of our Ambles to an original village in the Valley of Mexico has once again led to encountering a vital community of everyday Mexicans celebrating their traditions with vigor. This time, during the Easter Season, the celebration is focused on a central Catholic symbol, the Cross of Christ as the means to His Resurrection and, thus, the hope of eternal life. And we once again witness the pride in shared communal identity. The three crosses that will be raised on the hill above Santa Cruz Acalpixca bespeak of the community's faith in their God and and its commitment to maintaining communal identity.

P.S. On the Tuesday after our visit, we check the parish Facebook page and find the community has posted a video of the three crosses being carried to the top of the hill, where they will stand vigil over Santa Cruz Acalpixca for another year.

Posted by Reed Brundage at 1:28 PM