As we described in our Introduction to the original indigenous quarters of what was the Mexica (Meh-SHE-kah) city of Mexico-Tenochtitlan and is now el Centro of the modern city, the Spanish conquerers simply added Catholic saints' names to the original Nahuatl names of the campan, or quarters, and grouped them together administratively as the Indian Republic of San Juan Tenochtitlan.


San Juan Moyotla was made the ayuntamiento, adminstrative seat, of the Republic. So we begin our search for the remnants of indigenous San Juan Tenochtitlan by returning to that quarter of Centro Historico that is now officially West Centro.

What the Spanish conquistadores named San Juan Moyotla is only a short walk from the Temple of San Francisco in Centro Histórico, the Franciscans' home base from which they went forth to evangelize, i.e., convert, los indios. We only have to cross the wide, busy and noisy Eje Central, the Central Axis, aka Lázaro Cárdenas, formerly San Juan Letrán, then amble along a couple of narrow, shop-lined side streets to arrive at the center of what today is commonly called el Barrio de San Juan, that is, San Juan Plaza.


We visited West Centro early in our ambles. In fact, it was while sitting in San Juan Plaza that we had our insight into Mexico City as a vertical archeological site, with the artifacts of different eras sitting side by side. Little did we know at that time about where it was we were sitting, historically.

What is now officially West Centro contains most of what was the parcialidad or quarter of San Juan Moyotla. In Nahuatl, moyotla apparently means "place of the mosquitos" because it was swampy.


In 1524, with the establishment of San Juan Tenochtitlan and its four parcialidades, the Franciscans, who had been given the charge by Emperor Charles V and Pope Adrain VI to evangelize los indios, began their work in Mexico City and elsewhere across the center of Nueva España.

In San Juan Moyotla, the Franciscans built a church the north end of the already existing central plaza, which was the quarter's tianguis, open-air market. It is likely that the tianguis had been there for many years. Whether there were temples there is unknown. Buildings for the ayuntamiento, government center, were erected nearby.

Thus was established the triumverate of powers that are present, in varying forms and combinations, at the center of every Mexican pueblo, be it city, village, hamlet or barrio: a Catholic Church, government offices and a marketplace.

Two churches still bound the northern and western sides of the plaza. The mercado, market, was moved into other buildings in the 1950's. The ayuntamiento offices have disappeared. However, the churches standing today are not the originals built in the early 16th century. Each church has its own interesting story.

The church built by the Franciscans was dedicated to San Juan Bautista, St. John the Baptist, likely to focus on the crucial act of baptizing the "pagan" naturales, thus converting them into Catholic Christians.

The original church was demolished in 1769 and a new church was built in the 1770's. At that point, the Archbishop of Mexico City took control of all the parish churches run by orders such as the Franciscans and placed them under diocesan "secular" clergy. 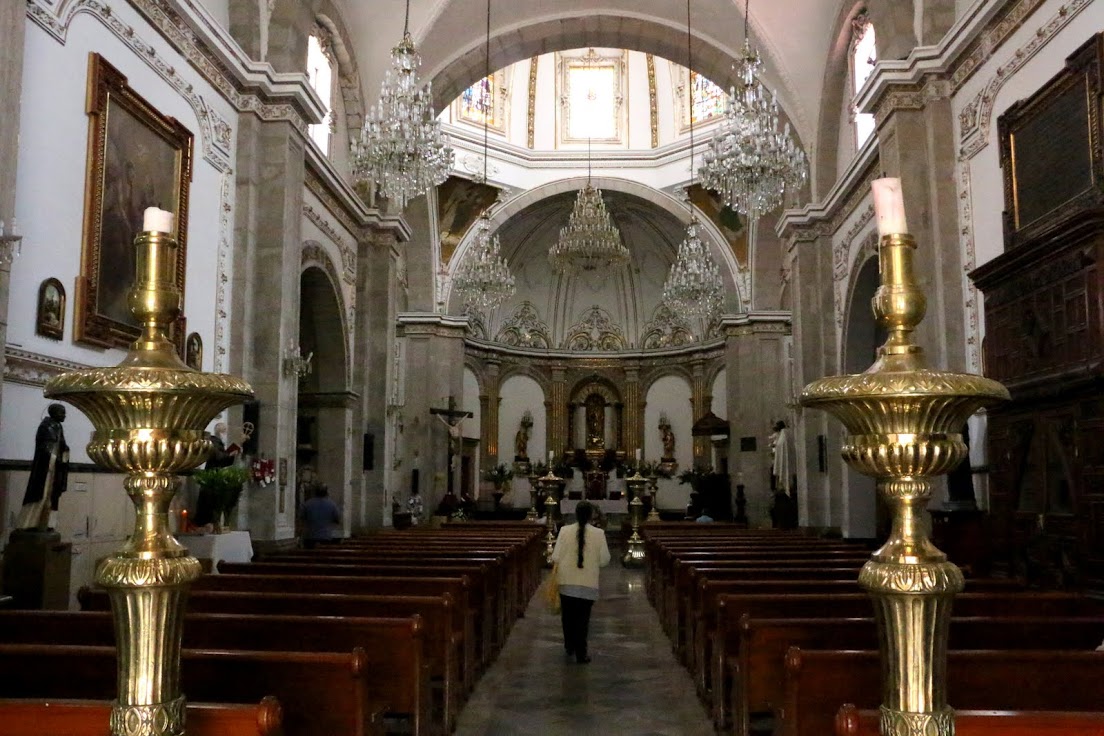 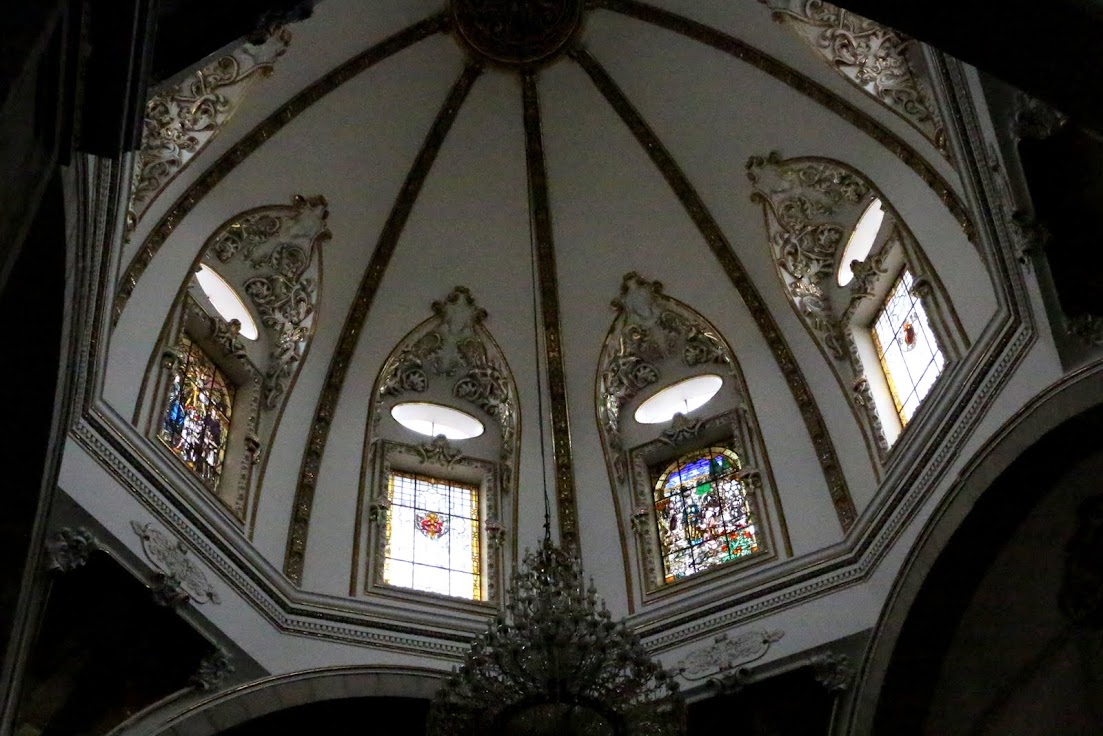 The new church was named Parroquia of San José, St. Joseph. The building was severely damaged by an earthquake in 1858 and was rebuilt in 1861. In 1867, with implementation of the Laws of Reform, which expropriated church property, the convent was taken. The church remains a parish church to this day. At some point in its history, it also became dedicated to Our Lady of the Sacred Heart. In 1993, Pope John Paul II desigated it a Minor Basilica because of its history in the evangelization of Mexico.

From San Juan de la Penitencia to The Good Tone


Originally, a small chapel was built by the Franciscans on the west side of the plaza. In 1591, a convent and church for nuns from the Order of St. Clare, the female counterpart of the Franciscans, were built on the site and named San Juan de la Penitencia. A hospital for los naturales was built beside the convent. In the first decade of the 18th century, the church and hospital were rebuilt.

In 1867, with implementation of the Laws of Reform, the church and convent were abandoned. In 1890, the French immigrant and tobacco entrepreneur, Ernesto Pugibet, bought the property of San Juan de la Penitencia, tore down the convent and built a cigarette factory, El Buen Tono, the Good Tone. In 1912, he had the church torn down and built the existing neo-gothic structure, named for the Lady of Guadalupe, in honor of his wife, Guadalupe Portilla. Everyone calls the church la Iglesia del Buen Tono.


The evolution of the San Juan mercado, market, is also a story of the evolution of the City from its indigenous origins to its present-day forms. In the Mexica city of Tenochtitlan, as in every indigenous city and village in what is now Mexico, in the central plaza there was a tianguis, Nahuatl for open air market, where goods were exchanged by barter. The Spanish were accustomed to similar markets in European cities and towns, so they just continued the indigenous ones. San Juan Plaza was a tianguis, a marketplace.

As the lithograph above shows, the open air market was replaced by a building in the 1850's. After the Mexican Revolution, the Mexico City government (then the Federal District, a dependency of the federal government) undertook a major endeavor to eliminate open air markets, replacing them with indoor ones. In San Juan, they eventually built four:
San Juan de Curiosidades: From Household Supplies to Arts and Crafts

The 1950s market building for curiosidades, household supplies, was rebuilt in the 1970s. At some point thereafter, it was turned into a market for artesanías, Mexican folkloric-style arts and crafts. The building takes up the entire east side of San Juan Plaza. 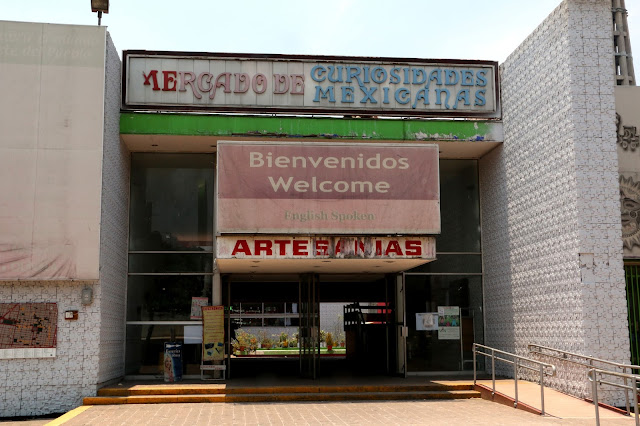 Stepping inside, we meet one of our personal favorites of artesanía:

The market is three floors of puestos, stalls, offering a variety of artesanía.

On the weekday when we visit, there are few customers in the mercado. It is definitely worth a visit, and, as we suggest to some of the merchants, the mercado could use some publicity.

On the way out, posted to the side of the entrance, we notice a sign that celebrates the market's long history:

Leaving the artisans' market, we walk through the Plaza, passing several clearly long-time cuates, buddies, engaged in that eternal pastime of darle la lengua, chewing the fat, while resting in the shade. 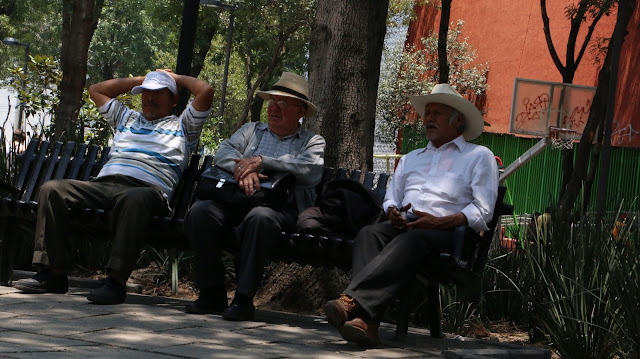 We turn the corner by "El Buen Tono", onto Ernesto Pugibet Street. There we encounter the second San Juan market. 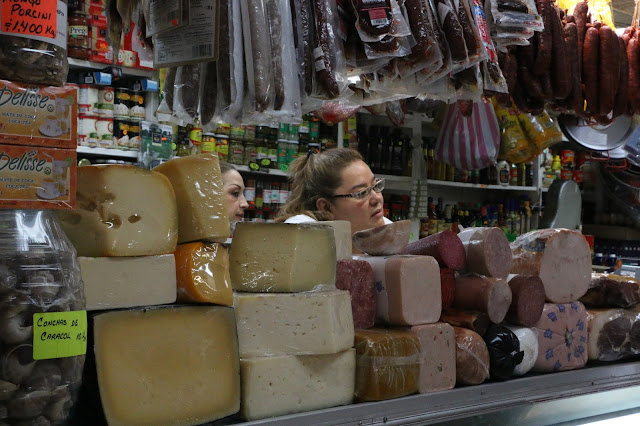 It may seem like nothing to an urban dweller from the U.S.,
but it is very difficult to find imported cheese or sausage in Mexico.

The Ernesto Pugibet Market offers specialty foods such as imported cheese and condiments. It also offers special meats and poultry such as suckling pig, baby goat, rabbit, whole goose and a wide variety of sea food. We spare you the photos. We are told you can ask for exotic items such as rattlesnake and alligator, but they aren't on view.

Leaving temptation behind, we walk further west along Ernesto Pugibet to a building that seems to have no sign. but its fuchsia pink facade gives a good idea of what's inside. 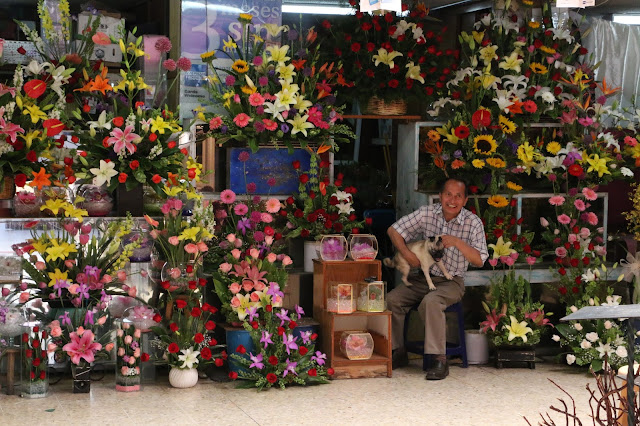 From the flower market, we turn south to walk a couple of block to find the fourth San Juan market. On the way, we notice another one of those coincidental records of the barrio's history.

San Juan Arcos de Belén: Everything and Anything You Could Want

Arcos de Belén, Arches of Bethlehem, like Eje Central, is another one of those wide, traffic-filled, noisy avenues that criss-cross the city. It marks the southern boundary of San Juan and present-day West Centro. Here, near the corner with Eje Central, stands the last, and biggest, of the markets, with the most colorful facade of them all.

You want it, they have it. It's a kind of Walmart long before globalization, but run by innumerable individual entrepreneurs, rather than by an anonymous conglomerate. 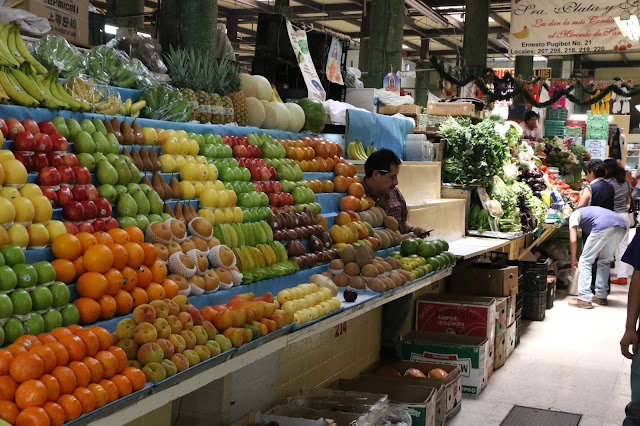 But before and after everything else, it offers food to eat.

So it is that in Barrio San Juan, aka West Centro, once upon a time San Juan Moyotla and, before that, Moyotla of Tenochtitlan, we encounter three central components of the transition of the city from México-Tenochtitlan to Mexico City via the Spanish adaptation called a Republic of the Indians.

There are the churches built by the Franciscans, likely replacing Mexica temples, and el mercado, markets, rooted—as the sign in the Mercado de Artesanías reminds us—in the tianguis of Nahua and every ancient civilization. And there is la plaza around which they centered.

These three key landmarks will help´to orient us, serving as reference points as we go on to explore the other parcialidades of San Juan Tenochtitlan and the numerous pueblos originarios, original indigenous villages scattered throughout the modern metropolis. Seeking out churches, markets and plazas will, ojalá, hopefully, give us wider, better educated eyes to understand what we see.