San Pablo Teopan, also called San Pablo Zoquipan, is the second of the parcialidades, four quarters of the Indian Repubic of San Juan Tenochtitlan that we are exploring to try to find remants of its indigenous roots and its transformation into a neighborhood of Spanish Colonial Mexico City. Now the southern part of East Centro, the core of the area is called Barrio de la Merced, neighborhood of Mercy, by its residents and chilangos, residents of the city. Why it is so named is one of many questions we seek to answer; it certainly points to a Catholic origin.

On initial visits, La Merced conveys the overall impression of another Mexico City batiburrillo, a hodge-podge of buildings and open spaces of various epochs in various states of repair and disrepair, full of, if not overwhelmed by, merchants selling and customers buying, a kind of marketplace gone viral.

A working class neighborhood, there is no single, central plaza, but several smaller ones. There is no single, main original church, but a number of Colonial period churches, convents and chapels whose relationships are unclear, at least at this point in our explorations. Thus, it presents much more of a challenge than San Juan Moyotla to uncover any underlying indigenous framework or any coherence in its Spanish Colonial transformation.

We start our ambles of the area from the Metro's Pino Suárez station. We were drawn to explore the neighborhood early on because of the peculiar juxtaposition of several major landmarks.

The Pino Suárez station is where our Line 2, coming from Coyoacán in the south, crosses East-West Line 1.  These Metro lines follow, in turn, two major, ancient roadways:
Then there is the Aztec/Mexica (Me-SHE-kah) altar, discovered when the station was being excavated. The Nahua name for the area, Teopan, means place of the gods.


Thirdly, there is the huge, modern Pino Suárez Market.

Returning now to this multi-layered intersection, we wonder, as we did the first time, about this combination of ancient crossroads and temple and the tiny, obviously old plaza that sits in the shadows to one side of the modern market, with two tiny Colonial buildings adjoining it.

The chapel of San Lucas, St. Luke's, was built near the end of the 17th century by the butcher's guild. The guild's patron saint is St. Luke, whose symbol is a bull. In colonial times, the city's slaughterhouse was located where the new Pino Suárez market is located.

The chapel of Santa María Magdelena is of an unknown date. Expropriated during the Reform period or after the Mexican Revolution, it became a government archive for agrarian records. St. Mary Magdelene is, among other functions, the saint of prostitutes.

Walking along the north side of Santa María Magdelena, through what is left of the plaza (now hemmed in by a modern office building), we come to a narrow back street where we encounter another piece to the historical puzzle:

From St. Luke's Market, we walk north a half-block to Izazaga and turn right, heading for Plaza San Pablo, St. Paul Plaza, and the Church of San Pablo, the original church built by the Franciscans in this indigenous quarter of the city.

We immediately encounter another form of mercado, street puestos, stalls. The sidewalk is walled in by them on both sides. We enter what feels like a labyrinth, but it's actually a linear market. 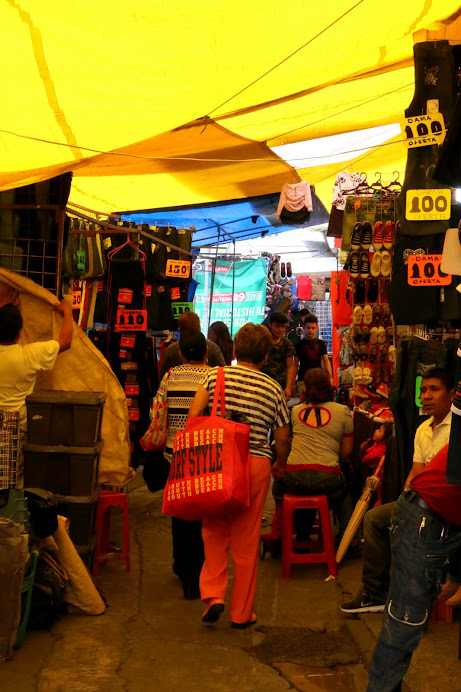 Emerging a block farther on, where Plaza San Pablo should be, we are faced by another wall of puestos. 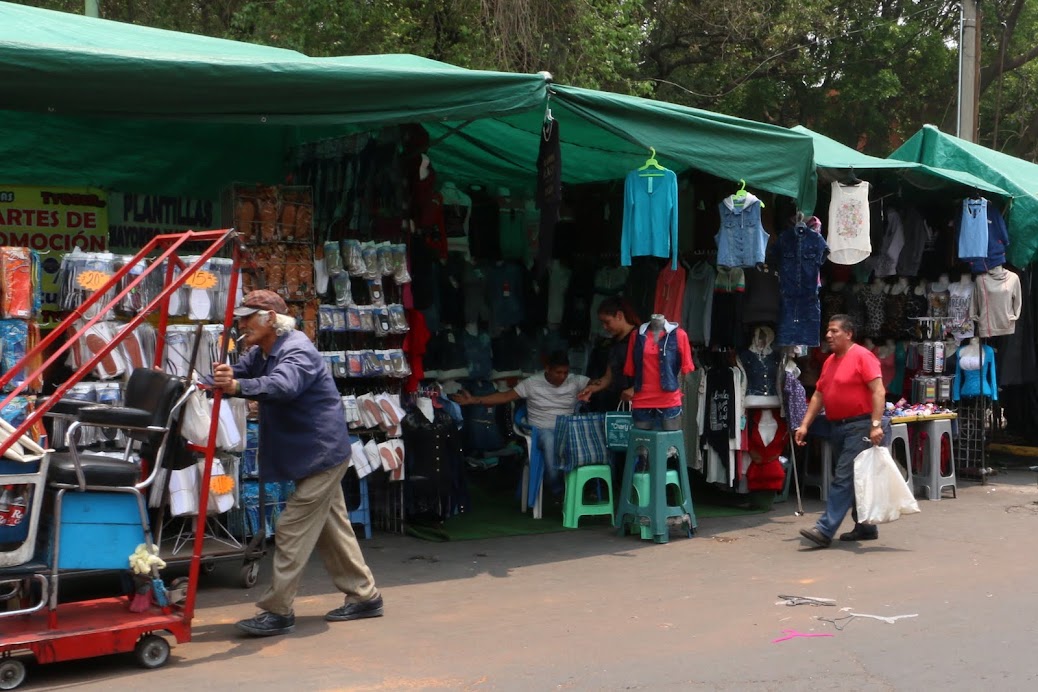 A thick stand of trees behind the puestos tell us there may still be a plaza there, but it is walled in, not only by stalls, but also—behind them—by a tall barrier of thick concrete posts. Between their spaces, we glimpse a tree-filled space and some apparently old buildings. We ask a merchant if there is any entrance to the plaza. He tells us the plaza is now occupied by a hospital, and its entrance is down the next side street.

We enter the next passageway of puestos. Reaching the corner, we turn right into another narrow side street. Halfway down the block there is an opening in the barrier of posts. It is an entrance to a parking lot for Hospital Juárez. As soon as we step inside, a guard calls out "No fotos." Across the parking lot, we can see the white side walls of an old church. Our goal is in sight, but perhaps unattainable.

When the guard approaches, we tell him our mission, seeking out the vestiges of the transition of Mexico-Tenochtitlan to Spanish Mexico City. He responds, "Déjeme checar"—"Let me check." On hearing those words in Mexico, one learns to let go of hope. When the person returns, the answer is usually, "No," or "You need advanced written permission" or "Come back mañana, tomorrow, or some day next week, or ..."

The guard returns from the guard house and says someone is calling "el jefe", the boss. We nod and wait, trying not to have any expectation. A couple of minutes later, he returns again, and, ¡Que milagro!, what miracle, he says we can take photos so long as he accompanies us. ¡No problema!

The young man turns out actually to be interested in our mission. We chat about how historically important this site is, and how unfortunate it is that virtually no one gets to see it. He waits patiently while we seek out the best angles for shots.

The church is now used by the hospital as an auditorium. It faces what was once the plaza, now a park-like space shaded by large Norfolk pines (from Norfolk Island, a small island in the Pacific Ocean between New Zealand and New Caledonia—the Spanish were the first globalizers). On the plaza's south side stands a handsome, beautifully restored colonial-period building.

It is Colegio San Pablo, St. Paul's College, a school established in 1575 by the Augustinian order to instruct indigenous boys and adolescents in the Catholic faith and Spanish-Latin culture. The Augustinians, who had arrived in Nueva España in 1533, originally had no churches in Mexico City.

So how did the Augustinians get to replace the Franciscans at San Pablo?

1
In 1569, the Archbishop of Mexico removed the Franciscans from control of their chapels in the four parcialidades of los indios and the one in Santiago Tlateloloco and assigned "secular", i.e. diocesan, clergy under his direction. However, in 1571, the leader of the Domincan Order, Fray Fernando de Paz, complained about this to Pope Pius V, who responded by directing the Archbishop to distribute the five churches among the Franciscans, Augustinians and Dominicans. San Pablo was to be given to the Augustinians.

The Archbishop dragged his feet. The head of the Augustinians complained, in turn, to King Philip II of Spain. In 1574, the King issued an order to the Archbishop to comply with the Pope´s order (King Charles had earlier won from the Pope the right to select Spanish bishops). In 1575, the Augustinians took over San Pablo and immediately established the Colegio, which was to become the largest colegio for indigenous people in Nueva España. In 1581, they replaced the original Franciscan chapel with a new building.

Feeling that we have hit the jackpot, we energetically thank our doorkeeper and guide for helping us realize our goal and leave the hospital grounds, headed for our last objective of the day. We wonder how the site of a Franciscan mission turned into a major modern hospital. Later, back home, we research the question.

In 1847, when the United States invaded Mexico and General Winfield Scott attacked Mexico City, there weren't enough hospitals to treat the wounded. The College of St. Paul was turned into a hospital. With the subsequent Wars of Reform (1858-61) and the French Intervention (1861-67), it continued to function as the Hospital San Pablo. When Benito Juárez, who had led the Reform movement and government, died in office in 1872, the City of Mexico changed the hospital's name to Hospital Juárez. It has been rebuilt and expanded several times. It now is the National Pediatric Institute.

Returing to Izazaga Avenue, which becomes Calle San Pablo, St. Paul Street, at this point where it curves around the Plaza San Pablo, we turn east again and walk a few steps past more puestos.

Almost surprising us, another church emerges in an opening in the seemingly endless streetside market. It is San Pablo Nuevo, New St. Pauls. As with many Colonial Period buildings in the city, its entrance sits some steps below street level, because of the sinking of the former lake-bed.

Why a New St. Paul's?, we wonder. The answer lies in yet another dispute inside the Catholic Church between the diocesan clergy and the religious orders, and a larger dispute between the nations of Western Europe.

In 1700, the Spanish Habsburg King Charles II died without a clear heir, triggering the War of the Spanish Succession (1700-1714) between the Habsburg Austrian Empire and the French Bourbons. (The English got involved, too, because whoever won Spain and its territories would control the balance of power in Europe and the Americas.) In the finally negotiated treaty, the French Bourbon Prince Philip of Anjou, grandson of Louis XIV, became King Philip V of Spain, ending the two-hundred year-long Habsburg reign begun by Emperor Charles V in 1516.

The Bourbons initiated a number of reforms in the Spanish government and church. One of them, in 1749, was to order the secularization of the churches controlled by religious orders, i.e., turn them into diocesan parish churches controlled by bishops. The Augustinians resisted giving up San Pablo with its colegio.

A new archbishop, appointed in 1767, turned up the heat. The Augustinans were told, by royal decree, that they could keep their colegio and the church, but had to pay half the assessed value of their properties toward construction of a new San Pablo, which would be the new parish church. The battle over this lasted nearly twenty more years, until 1785, when the Augustians finally ceded. The new church was begun in 1789, but because of more disputes over funding, it wasn't finished until 1799.

While the "Battle of San Pablo" was going on, the secular clergy appointed by the archbishop had nowhere to hold services. The Augustinians loaned them the use of a small chapel on their grounds, one sponsored by the tanner's guild associated with the slaughterhouse. We wonder whether it was San Lucas.

Pieces of the San Pablo Puzzle

So, in this amble we have gathered and found connections between some of the puzzle pieces of San Pablo Teopan-Zoquipan. The initial Franciscan mission of San Pablo, with its Augustinian expansion into a colegio for indigenous students, and its later diocesan replacement by Nuevo San Pablo, were located near what had been a Mexica religious site and, probably, a tianguis, open-air marketplace, all located at a major crossroads between Tenochtitlán and its outlying dependencies. 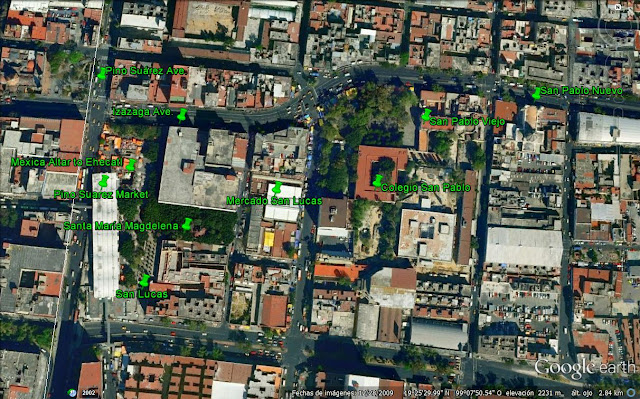 All this leads us to more questions about how this crossroads and the structures around it came to be. We know that there are more early Catholic chapels just down Pino Suárez, which becomes San Antonio Abad, St. Anthony the Abbot. We wonder how they might relate to the chuches of San Pablo and the parcialiadad of San Pablo Teopan-Zoquipán. And there we have the focus of our next post.