Whenever we travel up the Calzada (Highway) de Tlalpan by taxi to get to the Zócalo in el Centro, just where the highway exits an underpass that curves below Pino Suárez Avenue in order to connect with 20 de Noviembre, 20th of November Avenue, which leads derecho, straight to the Zócalo, we always make note of a small, simple, charming and obviously very old chapel. And we always say that we'll have to check it out someday.

Well, as we began focusing our ambles on southeast Centro and the second of the four former indigenous parcialidades, quarters of the Indian Republic of San Juan Tenochtitlan, San Pablo Teopan-Zoquipan, it became time to do what we had so many times said we would. We wonder what its relationship might be with the Churches of San Pablo Viejo and Nuevo that we explored in our first post on this quarter and with two other old churches just down the Calzada.

To get to the chapel, we walk south from Pino Suárez Metro station, following Pino Suárez Avenue for a few blocks to where it becomes the Calzada San Antonio Abad, St. Anthony the Abbot. This is the northern end of Calzada de Tlalpan, the former Mexica (Me-SHE-ka) cuepotli, causeway south to Iztaplapa, Coyoacán and Xochimilco. We are approaching the southern limit of historic Tenochtitlan and its island, now Centro Histórico. As we cross Pino Suárez and head west, we wonder where exactly the lake-shore boundary was. On the modern map of the City, we are crossing into Centro Sur, South Center.

Across the multiple, multi-lane roads, interweaving via bridges and underpasses, we see the chapel.

Chapel of the Holy Conception Tlaxcoaque 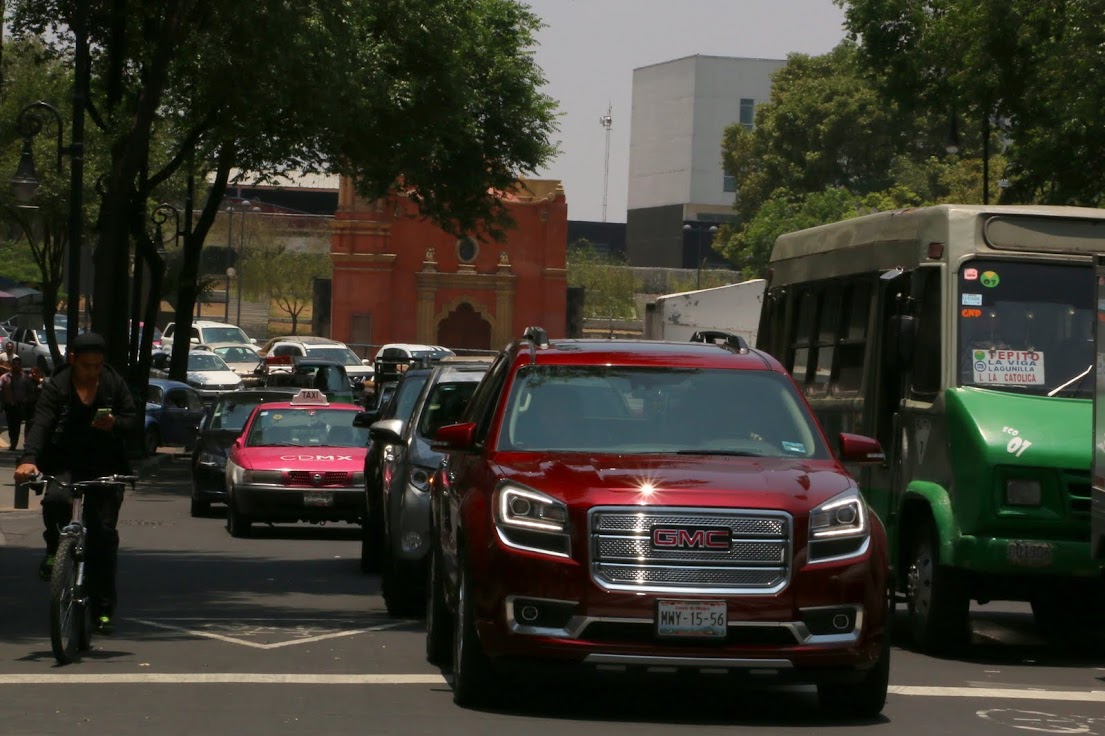 Finding a pedestrian underpass, we emerge near the plaza that surrounds the chapel.


The Chapel of the Holy Conception, popularly called Conception Tlaxcoaque (Tlash-co-AH-kay), was built in the seventeenth century, a hundred and some years after the Spanish takeover, in what was still the indigenous barrio of Tlaxcoaque, at the southern gateway to Tenochtitlan and then the Colonial City of Mexico.

The chapel, built of tezontle, volcanic rock, by indigenous workmen, was originally dedicated to the Blood of Christ. In the late seventeenth century, it was dedicated to the Immaculate Conception. In the 1930s much of the area was demolished to open wider roadways, including the Calzada de Tlalpan and 20th of November. The church was declared a national monument, which saved it from demolition, but it was isolated from pedestrians by the web of roads.

Despite its landmark status, the chapel was neglected and deteriorated. However, in 2009, with the coming bicentenary of Mexico's Independence and the centennial of the Mexican Revolution in 2010, the Federal District (City of Mexico) Government financed the restoration of the chapel and the plaza. The plaza now has a ground-level fountain system in which children of all ages can play and cool off from the intense Mexican sun. The plaza has also become a skateboard venue. 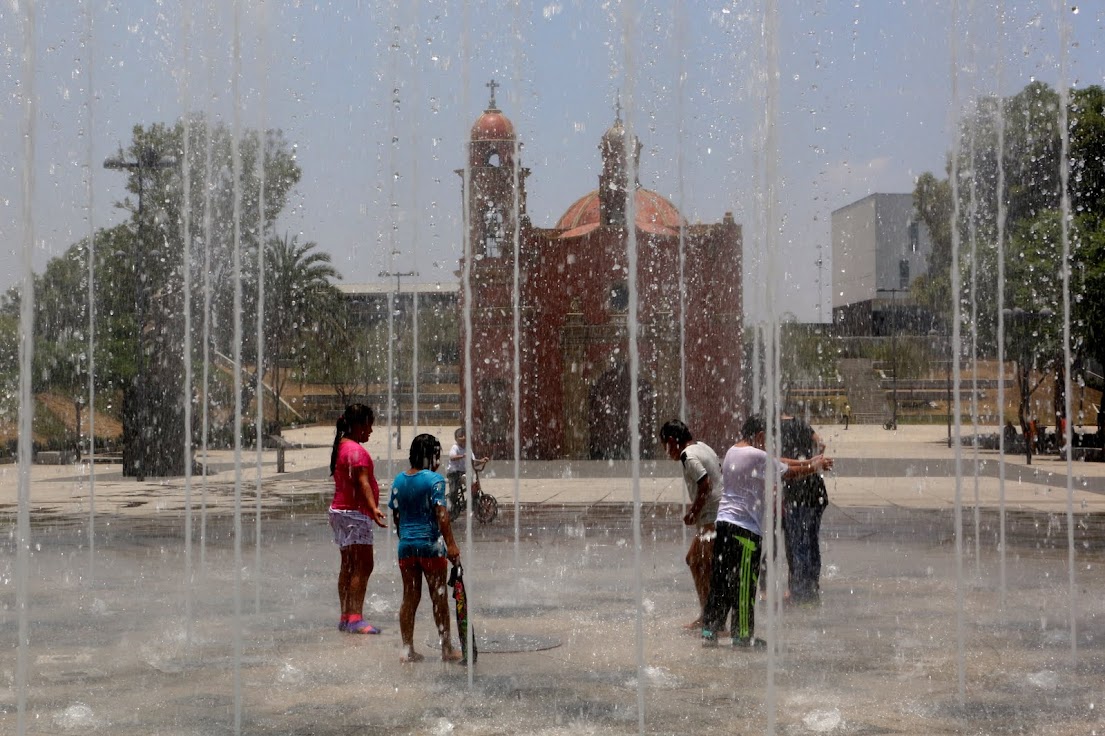 
A few blocks further south, on the east side of Calzada San Antonio Abad, stands the church of that name. A chapel was built here in 1530. The east side of the Calzada is now Colonia Tránsito. The present church, built in 1702, also served as hospital managed by the Hospital Brothers of St. Anthony. As we learned in San Juan Moyotla, the religious orders frequently established hospitals to serve the indigenous people. The hospitals not only provided treatment of the ill but also refuge for widows, orphans and the disabled. They were the first institutions of charity in the Americas.

We wish we could see more and know more of San Antonio Abad. We've never before seen this style of architecture, with its series of six buttresses and the scalloped roofline. Its location, near the end of the highway into el Centro, seems strategic. It remains a secret out of reach, for now.


But our frustration is soon to be assuaged. From the traffic-filled, eight-lane Calzada, we turn down the side street next to San Antonio Abad. A work crew is laying new sidewalk alongside the construction walls enclosing the church. Perhaps that is a sign of the site's future, ojalá, God willing.

We are now in Colonia Transito, a typical neighborhood of simple working-class houses, small apartment buildings and shops. In a couple of short blocks, we come to a classic Mexican plaza, filled with trees and park benches.

On one side is the Church of Santa Cruz Acatlán, Holy Cross of Acatlán, with its convent. Acatlán is the original indigenous name of the barrio. Walking a few blocks has taken us from noisy modernity to the tranquility of a past era and another landmark of the city's transition from Tenochtitlan to the City of Mexico.


The original church was built in 1533 by the Franciscans, under the direction of Fray Pedro de Gante. The present building was erected in 1770, at the height of the Baroque period, but it retains the simplicity of its earlier Franciscan origins. It looks very much like its cousins, San Pablo Viejo and the small chapel of San Lucas, not far to the north.

Outside, beside the door, stands a friar who could be from the Middle Ages. 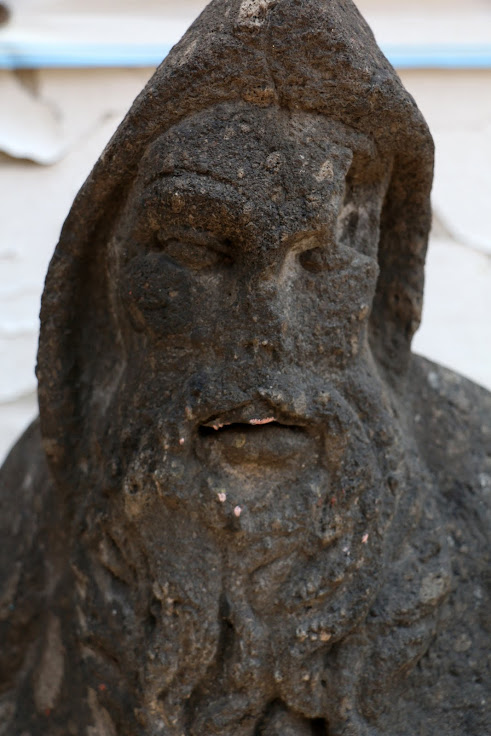 Why So Many Churches So Close Together? 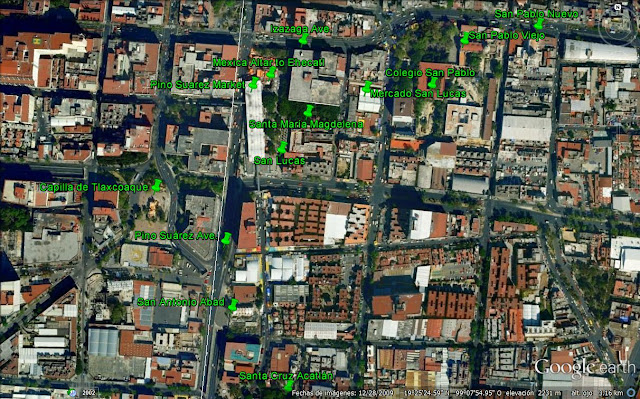 We wonder why so many churches were built so close together near the crossroads of Pino Suárez and Izazaga/San Pablo Avenues.
What might this have to do with the boundary between the island of Tenochtitlan and Lake Texcoco, the causeway that crossed it and the web of canals interweaving the island with the lake?

The answer comes in a gold mine of a paper by Dr. Rossend Rovario Morgado, Visiting Professor, Center for Research on Latin America and the Caribbean at the National Autonomous University of Mexico (UNAM). He provides the enlightenment we are seeking.

Foundations of Tenochtitlan: Many Islands Made Into One—More or Less


It turns out that Tenochtitlan or, more accurately, the island on which it was built over a two hundred year period (1325-1520) was not one island but a group of five islands (yellow circles) which the Mexica, you might say, cobbled together with mud from the lake and their sweat.


Tlatelolco is the island (yellow circle) to the north, which the Mexica incorporated in the 15th century. The more rectangular island to the west of the central island was along the route to the atepetl, city-state of Tacuba on the western lake shore. Remnants of such wood pilings have been uncovered in archeological excavations in Centro Histórico. Even the central island was itself marshy and had to be shored-up.

From Map 1, it's clear that Teopan-Zoquipan was an area primarily consisting of chinampas. Only its northwest corner was part of the solid ground of the original island and some extension via pile driving. Even those islands were crossed with canals. The remainder was the watery world of chinampas.

Teopan-Zoquipan: Where Land and Lake Intersected


Dr. Rovario Morgado provides another set of maps that answer the question regarding why the churches of San Pablo, and the Mexica temples that preceded them, were built where they were. They were erected at the edge of more or less solid land at the southern edge of the expanded island, at the verge with the larger region of chinampas.

A Mexica temple to the god or gods called Huitznahuac or Centzon Huitznauhtin, the gods of the southern stars, stood at this southern point until the Spanish demolished it and the Franciscans built their chapel (red circle). The area of temples, of which the Altar to Ehecatl was a part, was known as Tocititlan.

The other churches, Concepción Tlaxcoaque, San Antonio Abad and Santa Cruz Acatlán, were built on dry ground extending south into the causeway, along Teopan-Zoquipan's western boundary. Another map we discovered on the Internet makes all of this very clear.


Where the Xoloco Canal intersected with the Iztapalapa Causeway there was a removable bridge that served as a means of defending the city. (To visualize the canal-causeway intersection, see rendering of Tenochtitlan above) The former canal is now Calle Chimalpopoca.

In some accounts, it is recorded that it was at this bridge that Monteczuma came to meet Cortés in 1519, although other traditions say it was a few blocks north of the intersection of Pino Suárez and Izazaga, where another canal intersected the city from east to west. The Xoloco bridge was crucial in Cortés's subsequent attack on Tenochtitlan in 1521. Once he had control of this crossing, the way was clear for his troops to enter the city.

The crossing's strategic importance was revived in 1847, when the United States invaded Mexico. One of the last battles for Mexico City took place at the garita at Xoloco, the sentry gate on the old causeway road, primarily used to collect tariffs on products being brought into the city. Its location was approximately at the point where we began this account: the underpass where the Calzada crosses beneath Pino Suárez and one emerges along side the Chapel Concepción Tlaxcoaque.

So it is clear. The churches and markets of San Pablo Teopan replaced Mexica temples and markets and, like their predecessors, marked and continue to mark the importance of this southern gateway to Tenochtitlan/Mexico City.