However, Bellas Artes is set apart from its sister edifices not only by its aesthetic, but also because its construction embodied a radical transition in Mexican history and culture. Begun by Díaz in 1904, construction was interrupted by the Mexican Revolution (1910-17) that deposed him from his thirty-some-year domination of Mexico. Construction was resumed in 1932 and completed in 1934. The exterior and interior architecture and furnishing record this dramatic political, historical and cultural transition.


The outside is full-blown Beaux Arts, an ornate elaboration of Neoclassisism defined by the École des Beaux-Arts in Paris and popular in Western Europe and the Americas in the 19th and early 20th centuries (think Grand Central Station and the San Francisco Opera). It was designed by the Italian architect, Adamo Boari, who also designed the completely different Renaissance Revival Palacio de Correos across the street. Initially called the National Theater, this was Díaz's last effort to make Mexico City into a New World Paris of the turn of the century.


To these grand classical images are added small recollections of pre-Hispanic, Mesoamerican culture.


The glass and ceramic-covered dome, with its flowing lines designed by Hungarian architect Géza Maróti, is Art Nouveau.

Crossing an Historic and Aesthetic Threshold

Walking inside, you cross a threshold into the first clear aesthetic expression of 20th century moderism, Art Deco, with its intense, spare geometry. You may also think you have entered a Mexican version of Rockefeller Center. 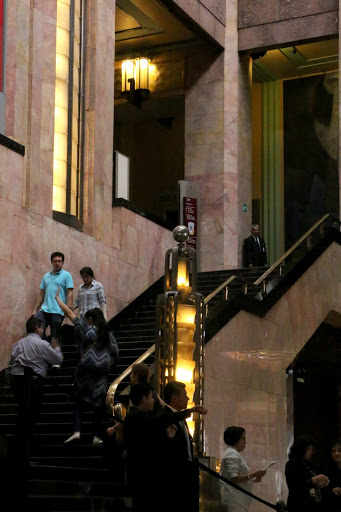 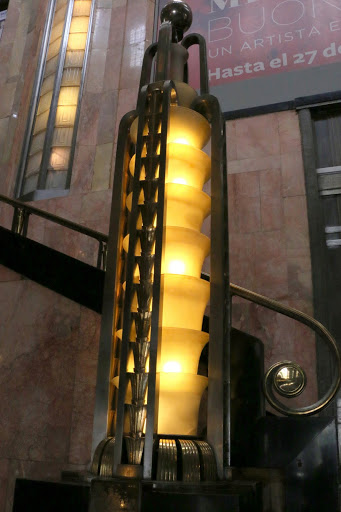 Here, too, are echos of Mexico's Mesoamerican roots.

Designed by Mexican architect Federico Mariscal, the ancient and the modern go together, perhaps because of their equally strong geometries,

Iconography of a Revolution and Its Aftermath

Looking up from the main lobby to the two balconies above, you get your first glimpses of yet another powerful aesthetic, one shaped by the Mexican Revolution and its consequences. Here, installed on the upper balcony, we will be confronted by the powerful, very modern works of Mexico's iconic muralists: Diego Rivera, José Clemente Orozco and David Alfaro Siqueiros.

Diego Rivera painted an initial version of El Hombre En El Cruce de Caminos (Man at the Crossroads), in 1933, in that other Art Deco palace, Rockefeller Center, under a commission by none other than John D. himself. However, Rivera, a Communist, included portraits of Marx and Lenin, understandably not to his patron's taste, so Rockefeller had the mural destroyed. In 1934, in Bellas Artes, at the bequest of the Post-Revolutionary, rather socialist government of President Lázaro Cárdenas, Rivera recreated it.


Post-Revolutionary Irony: Caricaturing Past and Present, Self and Others

Rivera's other contribution in Bellas Artes  — four-panel series he called Carnaval de la vida mexicana, Carnival of Mexican Life — is in a completely different style, Mexican caricature with its characteristic irony. The series was commissioned in 1936 by Alberto Pani, for his Hotel Reforma, one of the first modern hotels in Mexico City and one designed to attract U.S. and European tourists.

The paintings' blatant political content and unflattering portrayal of tourists led Pani to have it "touched up". When Rivera found out, there was an altercation between the two. Rivera won a lawsuit and restored the work, but Pani then put it into storage. The panels were finally sold to the government in 1963 and installed in Bellas Artes.


One can see why these paintings didn't go over with a hotel owner seeking U.S. clientele. It's also clear that we are no longer in the age of the Porfiriato (1876-1911), with its love of 19th century, bourgeois, "classical" European refinement, so clearly portrayed in the exterior of Bellas Artes.

But Rivera's symbolic modernist statements are understated compared to that of his fellow muralist, José Clemete Orozco.


Katharsis, named so by a Mexican art critic, painted in situ in 1934-35, is an overwhelming confrontation with the chaos of the revolutions and wars of the early 20th century. Two prostitutes, one young, one old, lie in the foreground, beneath two men, one clothed, bald, old, the other naked and perhaps young, struggling amidst the machinery of modern war. At upper left, the masses raise their fists in protest. Above it all, the consuming flames of destruction and, perhaps, catharsis. Certainly not an heroic view of the Mexican Revolution or the war to end all wars. It is the 20th century in your face.

We will see more of Orozco's view of modernity when we visit the Antiguo Colegio San Ildefonso.

The third, and youngest, member of the triumvirate of Mexican muralists is David Alfaro Siqueiros. His sculpted, almost three-dimensional murals deliver another powerful mix of hyper-realism and symbolism.


While these murals are a response to the Second World War, with its violence and hopes, Siqueiros painted a more direct take on the Revolution in Chapúltepec Castle, an edifice which played many roles in Mexican History and now, appropriately, is the National History Museum. We will return there soon. We will also visit the artist's last work, the monumental Sigueiros Cultural Polyforum, an entire building that is, itself, an abstract sculpture covered with murals outside and in. It was created in the last half of the 1960s, in Benito Juárez Delegación (borough) south of the city center.

Descending from the second to the first balcony, we are provided some relief from the intensity of the conflicts communicated in the works of the "Great Three". On the lower level, we meet RufinoTamayo.

Tamayo's murals are not only artistically abstract; they are also conceptual abstractions of the historic development of Mexico: the contrasting roots of its indigenous civilizations and the Spanish Conquest, and the mestizaje, the mixing of the two cultures. It is a classic example of the dynamics of thesis, antithesis and final synthesis of Hegel and Marx.

The murals portray the ideological hope of the Revolution, or at least of its intellectual spokesmen such as José Vasconcelos (1882-1959) and his vision of Mexican history as producing the "Cosmic Race," the synthesis of all races. We will meet Vasconcelos when we visit the Secretariat of Public Education, which he founded, and where he had Diego Rivera create a panoramic series of murals portraying Mexican culture and the Revolution.

Walking Through a Revolution

So we come to the end of our perambulation through Bellas Artes. Literally, moving from outside to inside, from top to bottom, it has been a walk from the Porfiriato epoch at the end of the 19th century, across the violent eruptions of the Mexican Revolution in the second decade of the 20th century, to some of the artistic, cultural and political perspectives of modern Post-Revoultionary Mexico. Quite a tour! Quite an edifice!

For the background of the Mexican Revoluion, see:


Mexican Revolution: Its Protagonists and Antagonists

Posted by Reed Brundage at 5:03 PM