After the Spanish Colonial period, and until the current era of global-style, post-modern construction, the architectural heritage of the Porfiriato, the thirty-five year period of the dictatorial presidency of Porfiro Díaz, (1877-1911), is the second most important era for shaping the look and ambience of the center of Mexico City.

Díaz undertook to turn the City into one modeled after Paris. He turned Paseo de la Reforma into a French-style boulevard, with monumental statues at major intersections, and he ordered the construction of many major government and civic buildings in the Historic Center. Wealthy Mexican and foreign businessmen built luxurious homes, which mimicked the styles of European royalty and the wealthy bourgeoisie, along Reforma and in new colonias, neighborhoods, to the north and south of it.

It is another one of those curious, seemingly paradoxical Mexican stories how European esthetics, and particularly that of the French Second Empire of Napoleon III (1852-1870), came to be recreated in Mexico under Díaz' leadership. He was a mestizo (mixed, Spanish and indigenous) who, like Benito Juárez, came from the southern state of Oaxaca. Even more paradoxically, he had been a leading general in the War of Reform and the war against the French Intervention, instigated by that very Napoleon, a president who had turned himself into an emperor.

Porfirio Díaz was born Sept. 15, 1830 in Oaxaca City, Oaxaca. His mother, Petrona Mori, was the daughter of a Spanish immigrant and Tecla Cortés, an indigenous woman. Díaz's father, José de la Cruz Díaz was a criollo [pure Spanish, born in New Spain] and a modest innkeeper who died of cholera when his son was three.

Despite the family's difficult circumstances following the death of his father, Díaz was sent to school at age 6. The Díaz family was devoutly religious and, at the age of fifteen, Díaz began training for the priesthood at the Colegio Seminario Conciliar de Oaxaca, but important national events intervened. During the Mexican American War/U.S. Invasion of Mexico (1846-47), seminary students volunteered as soldiers to repel the U.S. invasion. Although he did not see action, Díaz realized that his true vocation was not the priesthood, but the military.

Also in 1846, Díaz came into contact with Marcos Pérez, a leading Oaxaca liberal, who taught at the secular Institute of Arts and Sciences in Oaxaca. Benito Juárez, who became governor of Oaxaca in 1847, had been a student there. Díaz met Juárez that same year. In 1849, over family objections Díaz abandoned his ecclesiastical career and entered the Institute to study law.

When Antonio López de Santa Anna returned to power via a coup d'état in 1853, he suspended the 1824 Constitution and persecuted liberals seeking to re-establish the Constitution and democratic government. At this point, Díaz had aligned himself with radical liberals (rojos), such as Juárez, who was forced into exile in New Orleans. Díaz supported the liberal Plan of Ayutla that called for Santa Anna's ouster. Evading arrest, he fled to the mountains of northern Oaxaca, where he joined the rebellion of Juan Álvarez.

During the War of Reform, the civil war of autocratic conservatives against the liberal, democratic government of Benito Juárez, Díaz became a colonel. In the subsequent War of the French Intervention, he participated in or led several crucial battles and was promoted to general. After the defeat of the French, the execution of Emperor Maximilian I and the return of the Juárez goverment to Mexico City in 1867, Díaz returned to private life in Oaxaca.

In 1870, Díaz ran as a presidential candidate against President Juárez and Vice President Sebastián Lerdo de Tejada. He claimed fraud in the elections won by Juárez, and, in typical caudillo, military strongman, style, he announced a rebellion, the Plan de la Noria on November 8,1871, but this rebellion failed. Following the death of Juárez in 1872, Vice President Lerdo became president. Lerdo offered amnesty to rebels, which Díaz accepted and took up residency in Veracruz. In 1874, Díaz served in the federal legislature, representing Veracruz.

In 1875, Díaz left Mexico and went to New Orleans and then to Brownsville, Texas, to plot a rebellion. In 1876, he announced the Plan of Tuxtepec (a town in Oaxaca) as a call to arms against Lerdo, who was running for another presidential term. Lerdo was re-elected in July 1876, but the rebellion forced Lerdo from office. In November 1876, Díaz occupied Mexico City, and Lerdo went into exile in New York City. Díaz did not take formal control of the presidency until the beginning of 1877, placing General Juan Méndez as provisional president, until new presidential elections in 1877 officially gave Díaz the presidency.

Diáz got himself "re-elected" president of Mexico over a thirty year period (1877-1911). For the upper-class, it was an era of political stability, industrialization and economic growth. For lower classes, it was a time of exclusion and suppression of protests. Díaz maintained control through "Pan o palo", "bread or a stick", an informal system based on personal loyalty using patronage and repression. His motto was "little politics and plenty of administration." The epoch was to end suddenly with the outbreak of the Mexican Revolution in 1910, when various forces of social, political and economic opposition exploded.

Our focus is on the architectural identity Díaz and his supporters brought to the center of Mexico City. Perhaps most emblematic of this, Chapultepec Castle, with its Napoleonic ghosts of Emperor Maximilian, was, itself, transformed by Díaz into his summer palace, with the addition of such improvements as ornate Art Nouveau stained glass windows. 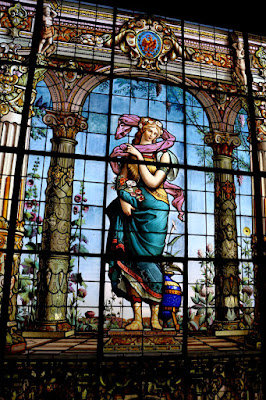 Strolling through the colonias built during the Porfiriato you almost feel that you are in some arrondissement of Paris, or, at least, in a tropical replica of the French capital. In subsequent posts, we will visit several of them: Santa Maria Ribera, San Rafael, Roma and Condesa.

But first, we will return to the Centro Histórico to explore the Neo-classic, Beaux Arts and Art Nouveau aesthetics of such Porfiriato constructions as the Museo Nacional de Arte (National Museum of Art), the Palacio de Correos (yes, a post office that is a palace), the Alameda Central park, the Palacio de Bellas Artes (yet another palace) and commercial buildings of the epoch.

Posted by Reed Brundage at 3:20 PM