Pino Suárez is a main commercial boulevard that runs south from the Zócalo and eventually becomes the Calzada de Tlalpan.

Like many streets throughout Mexico City and all of Mexico, it is named after a martyred hero, José María Pino Suárez. He was Vice President under President Francisco Madero, after the defeat and ouster of the dictator President Porfirio Díaz, at the beginning of the Mexican Revolution in 1911.


The Pino Suárez Metro station sits at the intersection of Pino Suárez and a main cross boulevard. It is the correspondencia or transfer station between Line 2 and Line 1, the Pink Line, which runs east-west across the center of the city. It also lies at an intersection of the many layers of Mexican history and culture.

In the underground passageway of the modern Metro one runs into a compelling statement from the first Mexico. When the station was being constructed in 1967, workers uncovered a circular Aztec altar, indicating by its shape that it honored the Wind God, Ehécatl, who announces the arrival of Tláloc, the Rain God. Still, today, in the rainy summer season, in the afternoon, Ehécatl sweeps down from the mountains into the Valley of Mexico ahead of Tláloc. 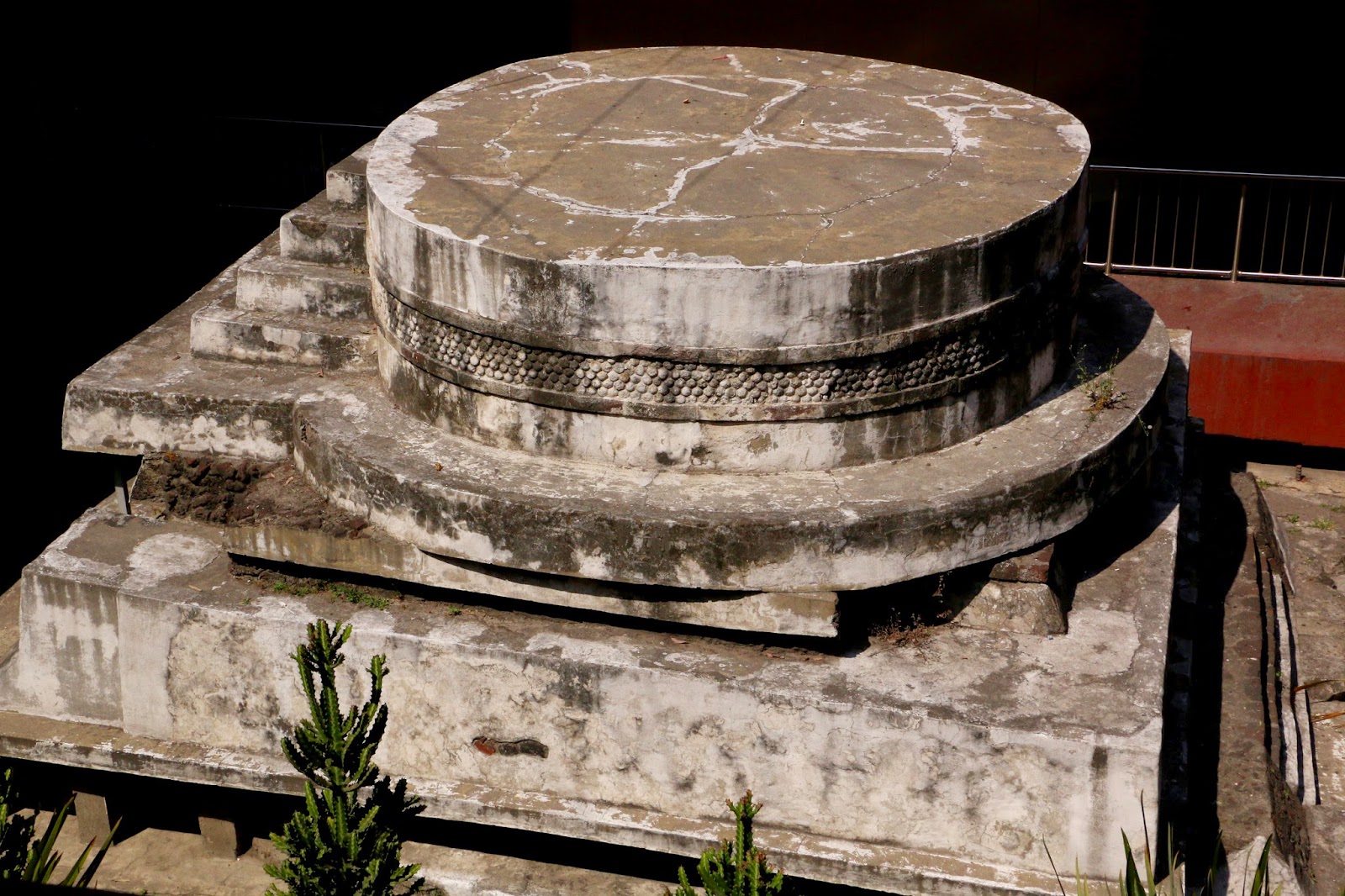 The altar, appropriately, rests in a sunken patio, open to the sky. But looking up, one doesn't see the heavens. Instead, one sees la cotidianidad, everyday life. The street level is inundated with puestos, street stalls, under brightly colored lonas de hule, plastic tarps, in a typical improvised tianguis, Nahuatl for street market. 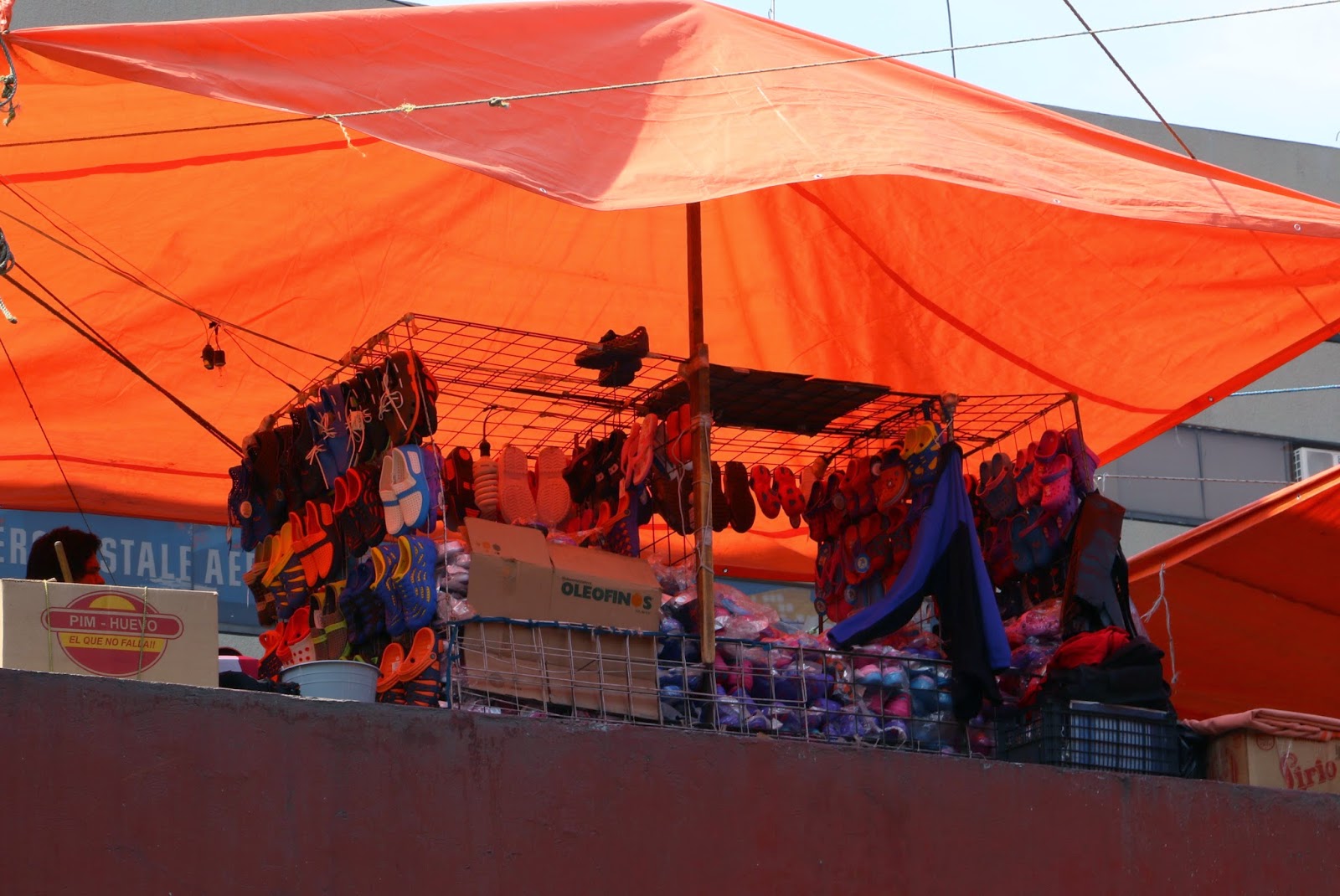 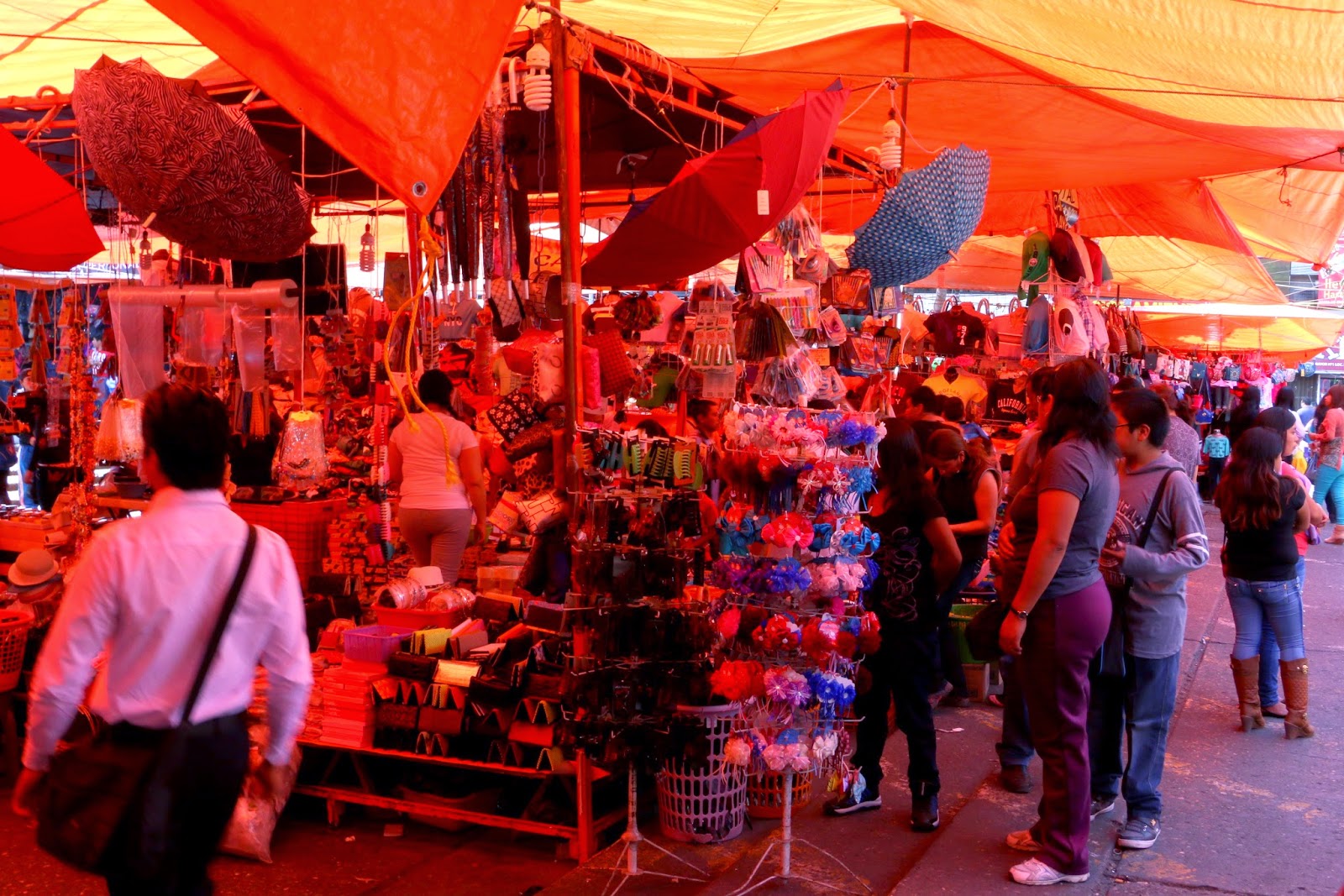 The area has known such markets since Aztec times. The coverings and the products have changed, but the culture of compra-venta, buying and selling is timeless.

To one side of the plaza containing the puestos is a gracious structure from another historic epoch, the Spanish Colonial Period. It was a chapel dedicated to Santa María Magdelena, St. Mary Magdalene. It now serves as the Agrarian Museum. 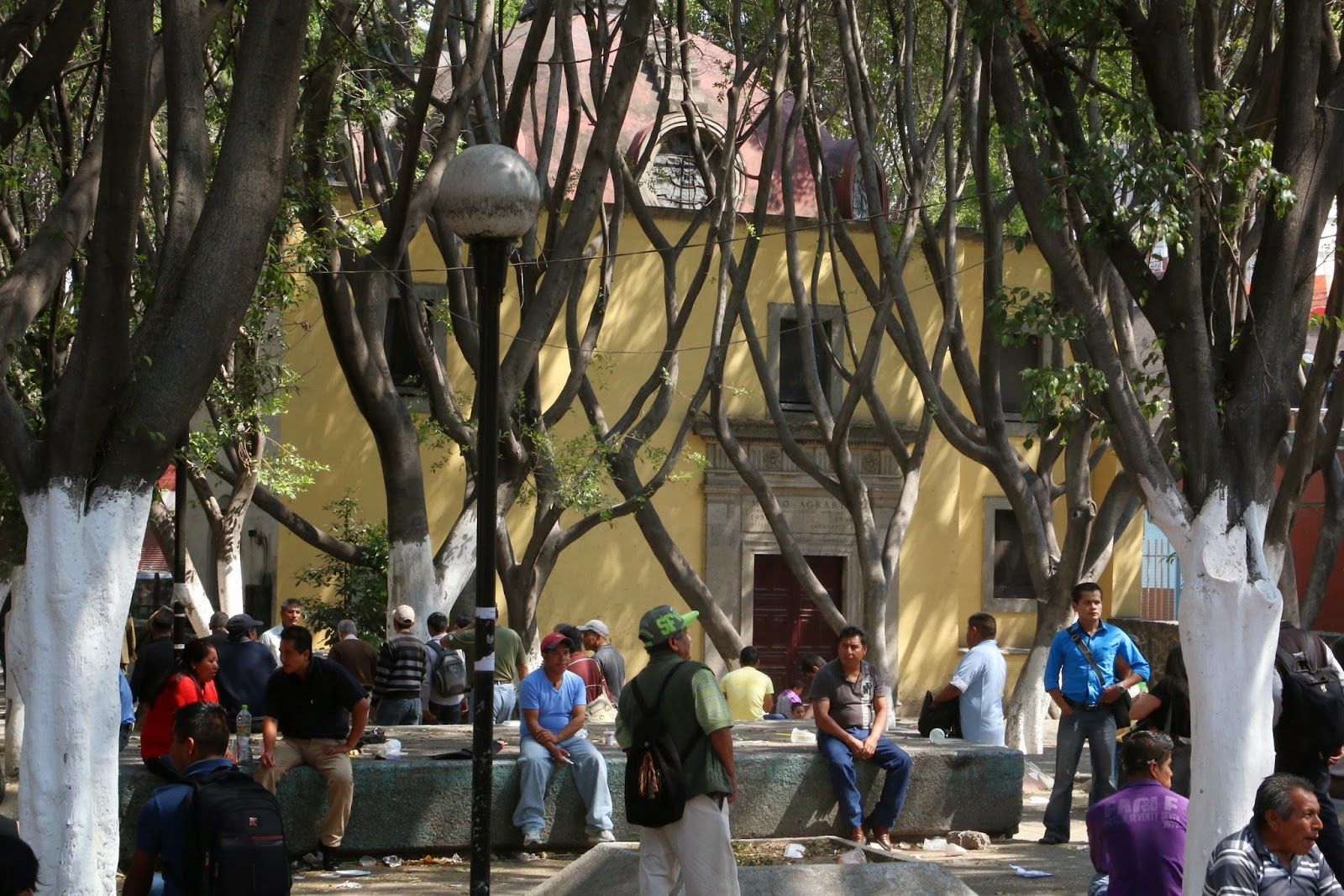 And next to the museum is a capilla, a chapel, dedicated to the Apostle San Lucas, St. Luke, that could be most anywhere in provincial Mexico. It was constructed during the colonial period by the guild of workers in the city slaughterhouse, which stood across the plaza. St. Luke is their patron saint, as he is represented by a bull. 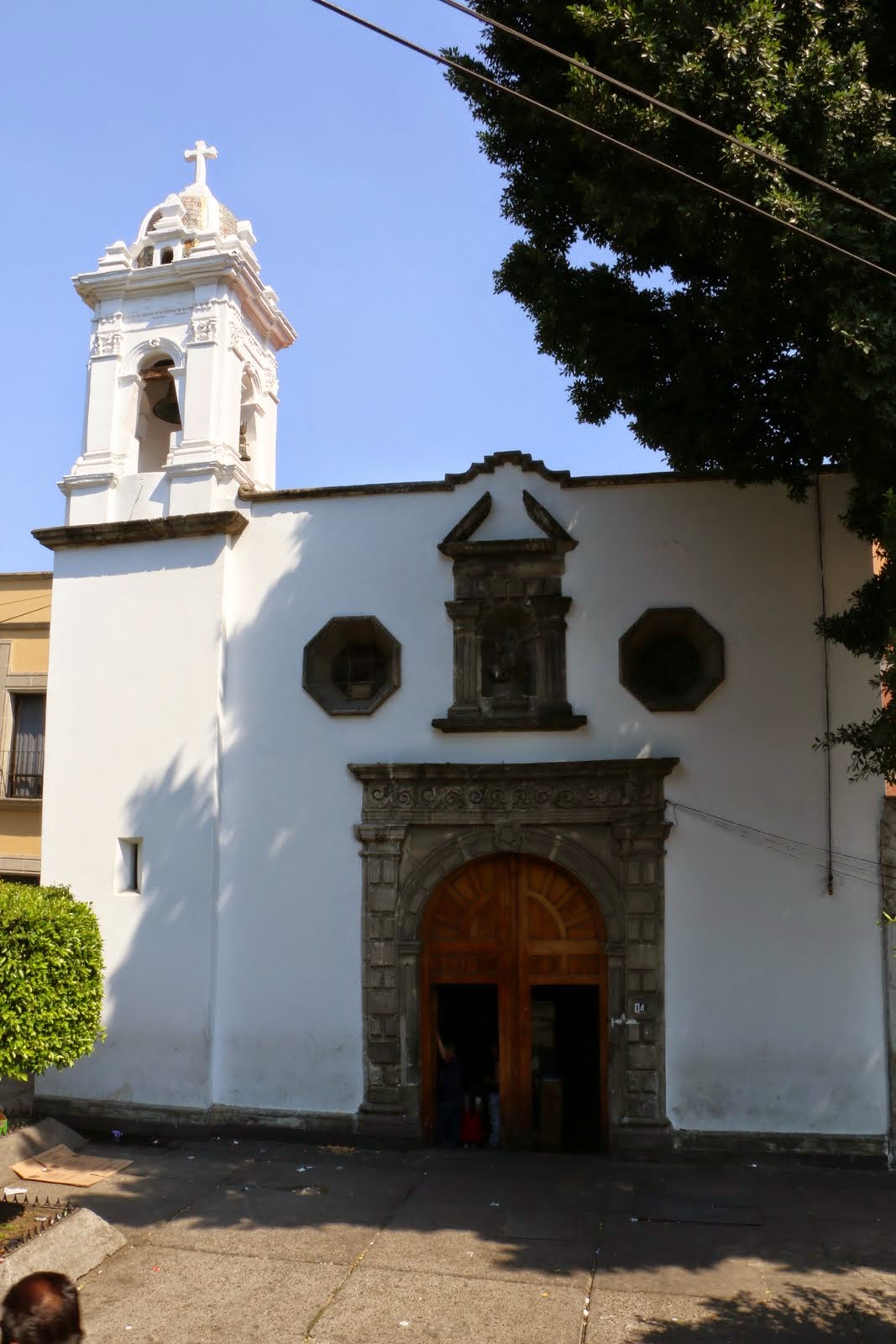 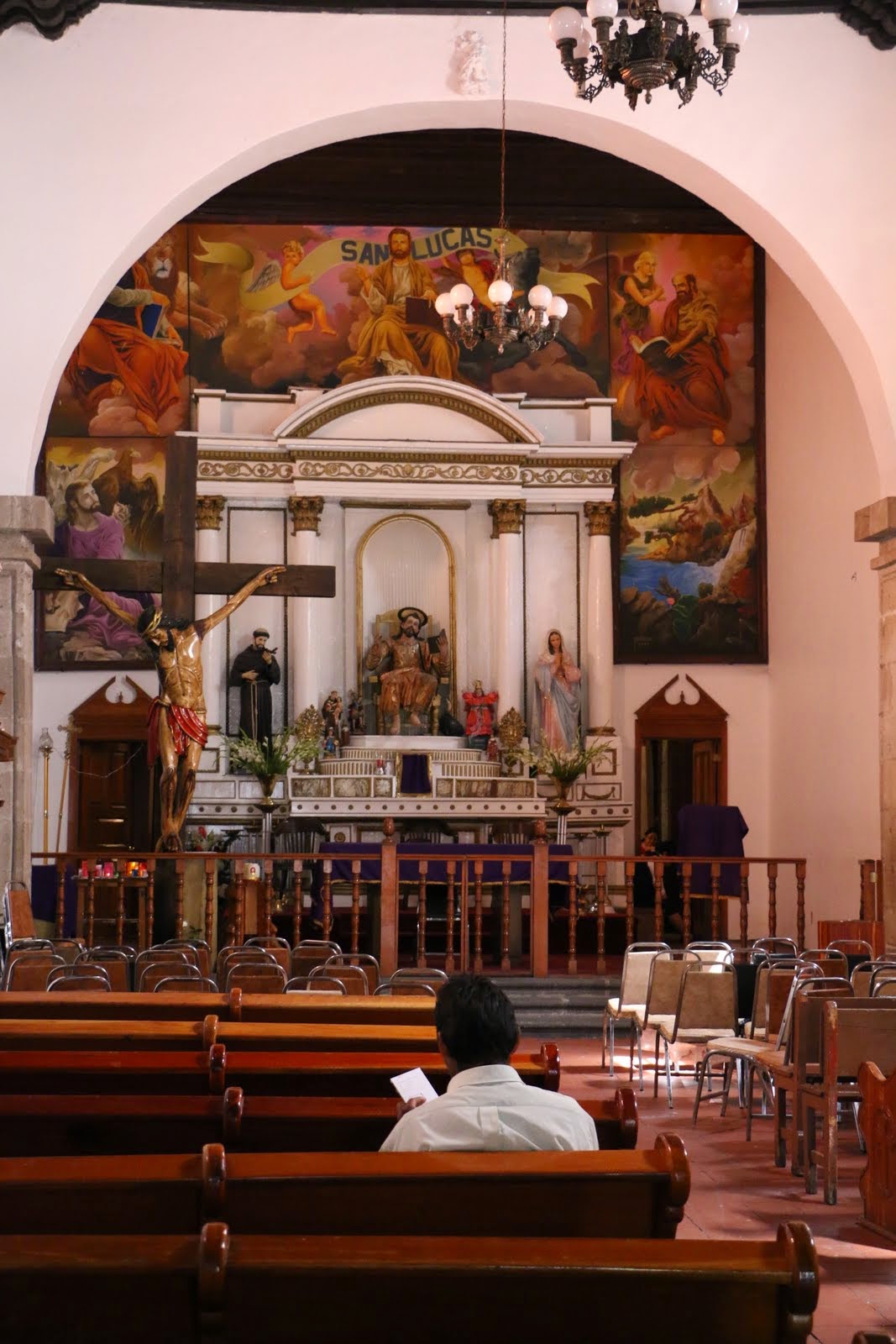 All of this, the colonial structures with their tranquil atrios, courtyards, and the bustling, improvised puestos, huddle around and are dominated by the Plaza Comercial Pino Suárez, a huge, modern structure which stands where the former slaughterhouse stooo. It houses hundreds of permanent puestos or locales, as permanent stands in indoor mercados, markets, are called. 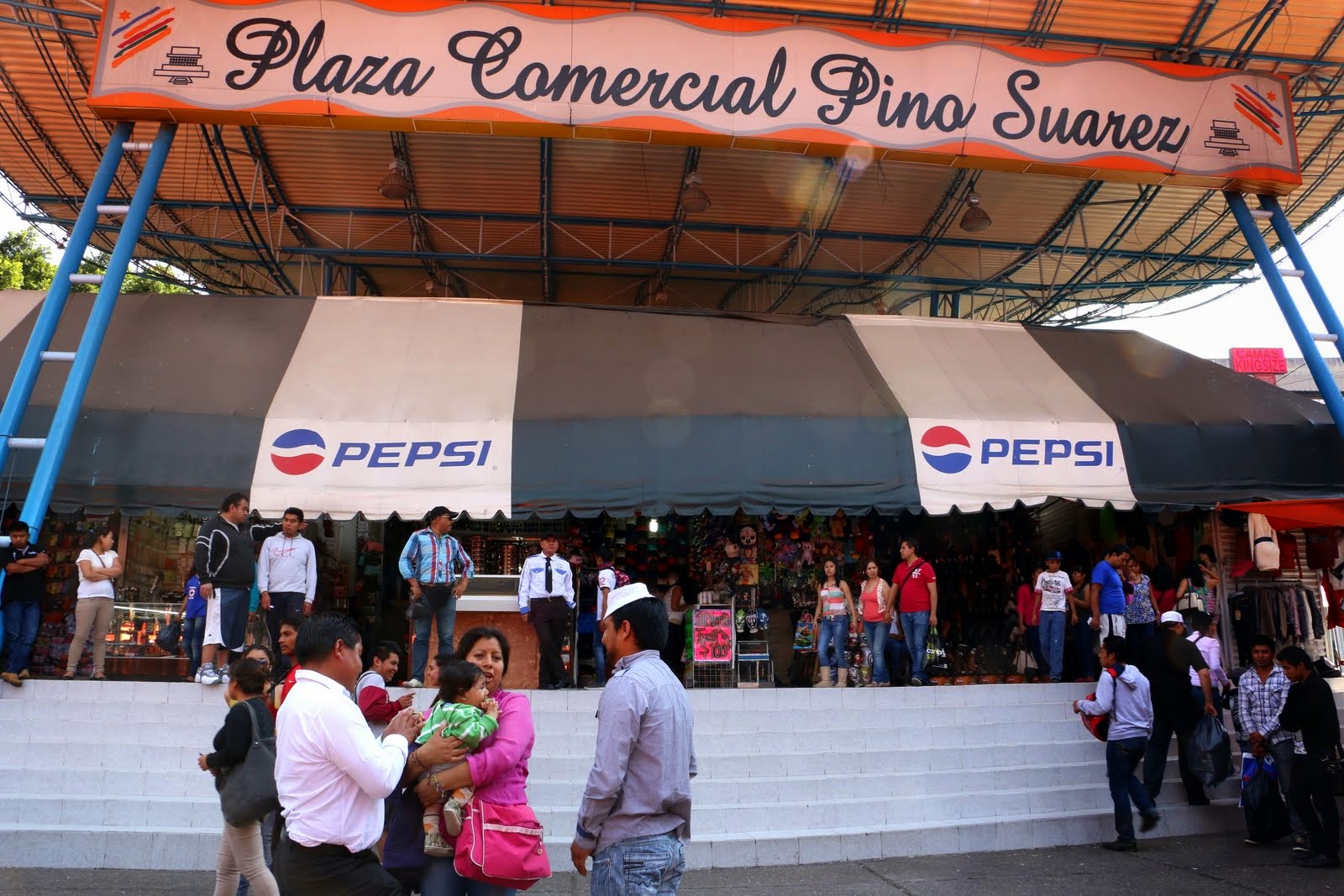 The building is actually a landmark of modern Mexican architecture. Designed by Felix Sánchez in 1992, "the large, undulating roof visually floats above the market space" (The New Architecture of Mexico, Image Publishing, 2005). 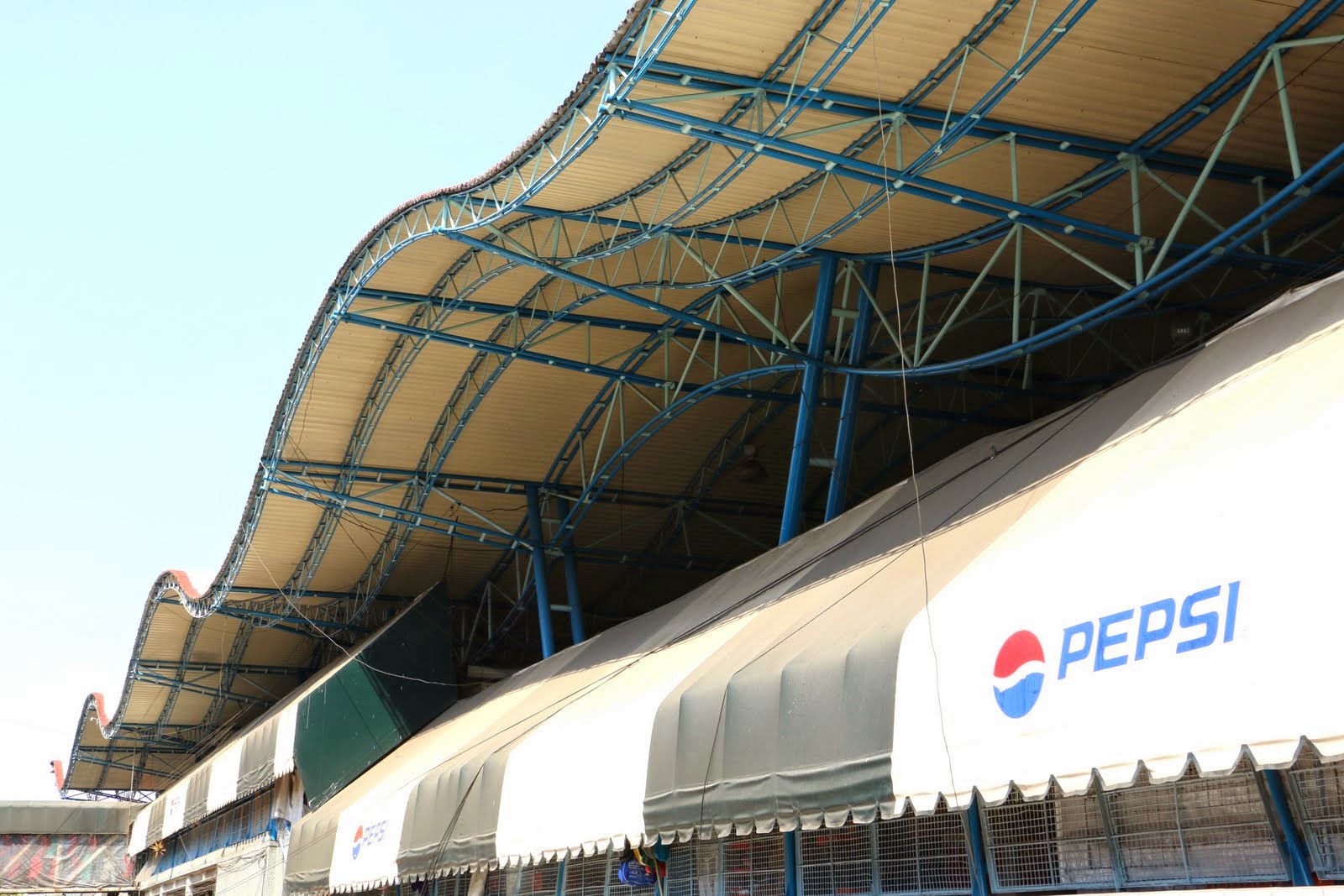 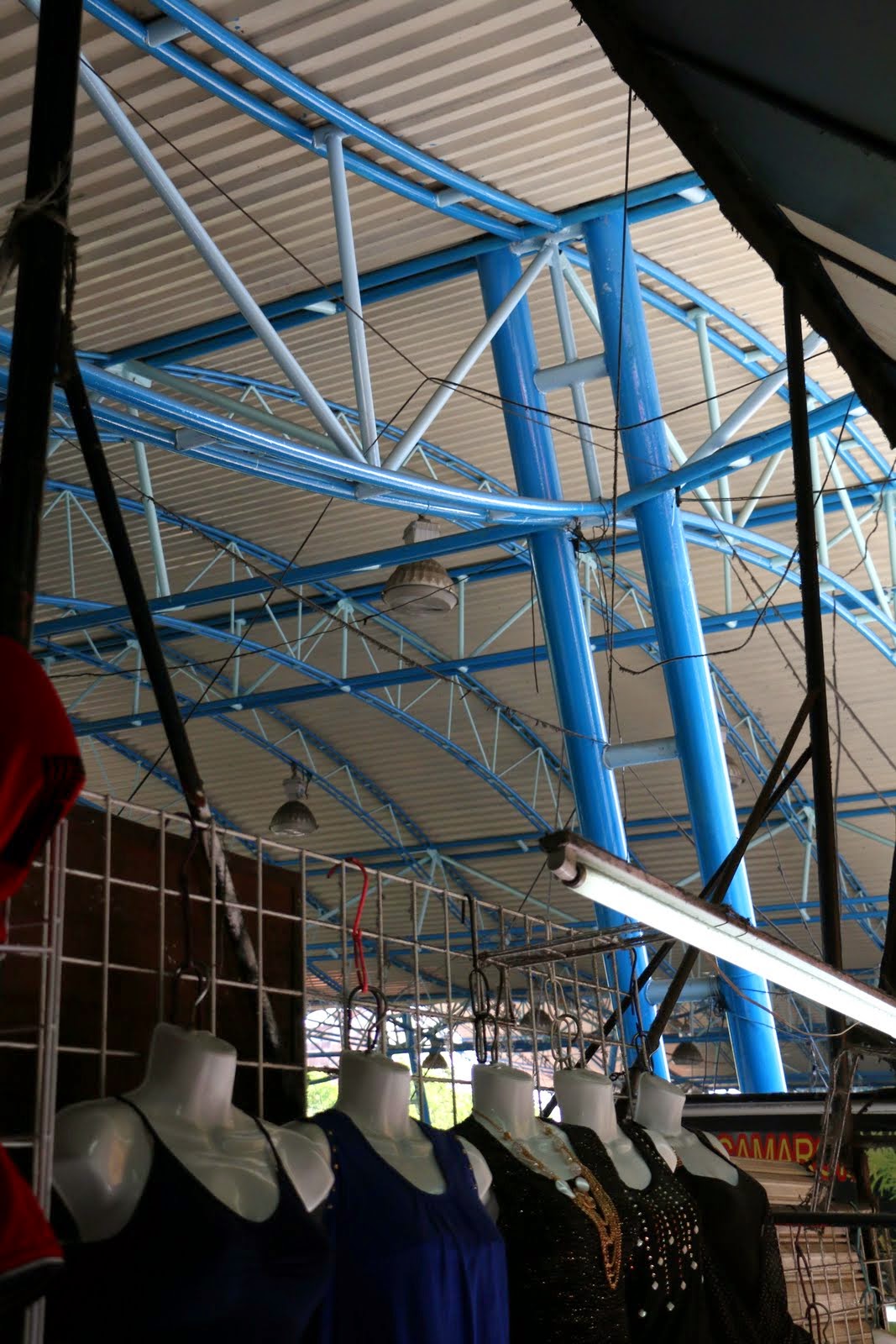 Underneath this avant-garde roof is a quintessential Mexican mercado! 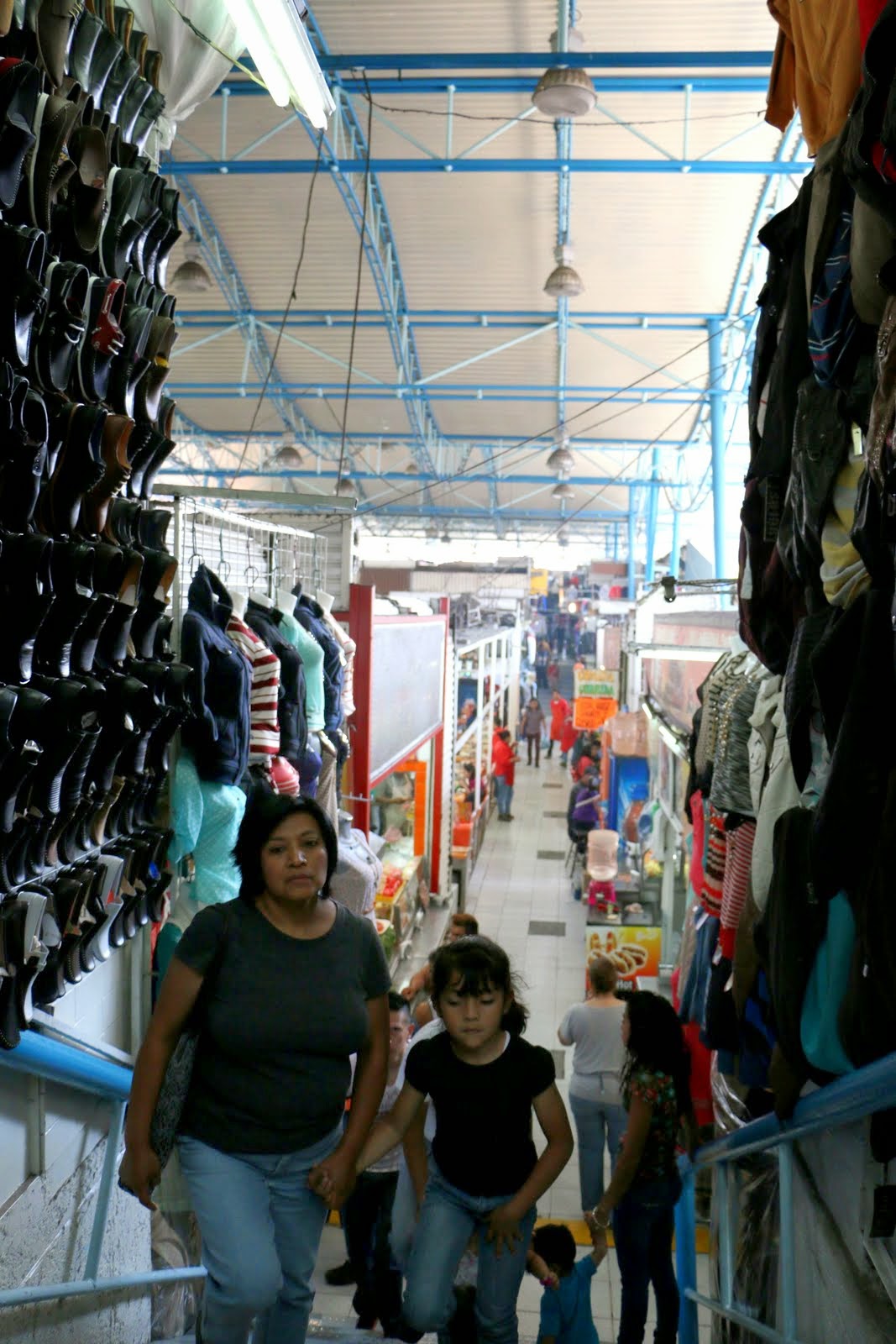 Aisles about a yard-wide are lined with puestos or locales, perhaps four square yards in size, each walled-in by merchandise, virtually all kinds of clothing--shirts, pants, dresses, shoes--each one tended by its owner. A true bazaar. 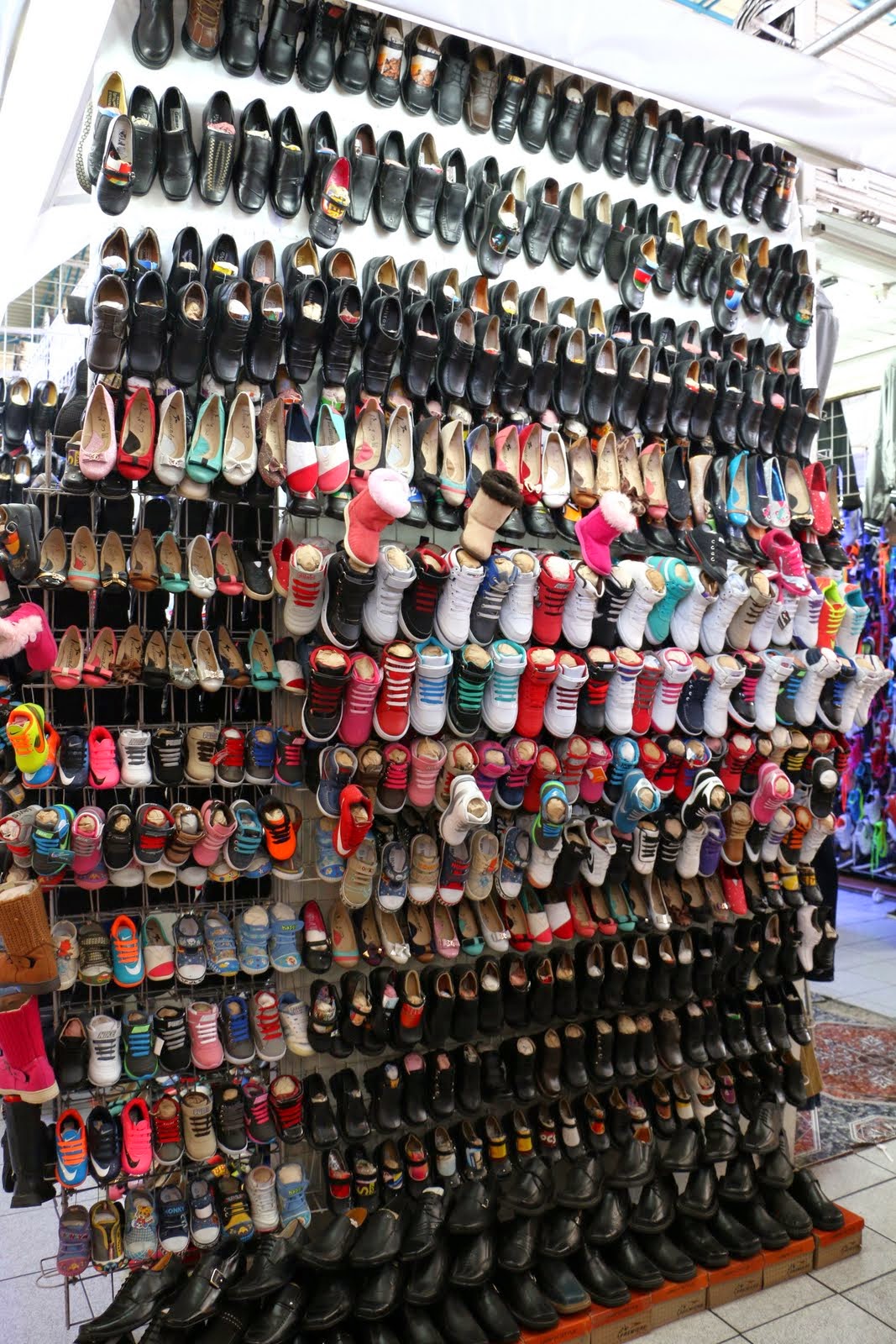 And, as exists in every Mexican mercado, stalls--some almost full restaurants--serve hot meals. 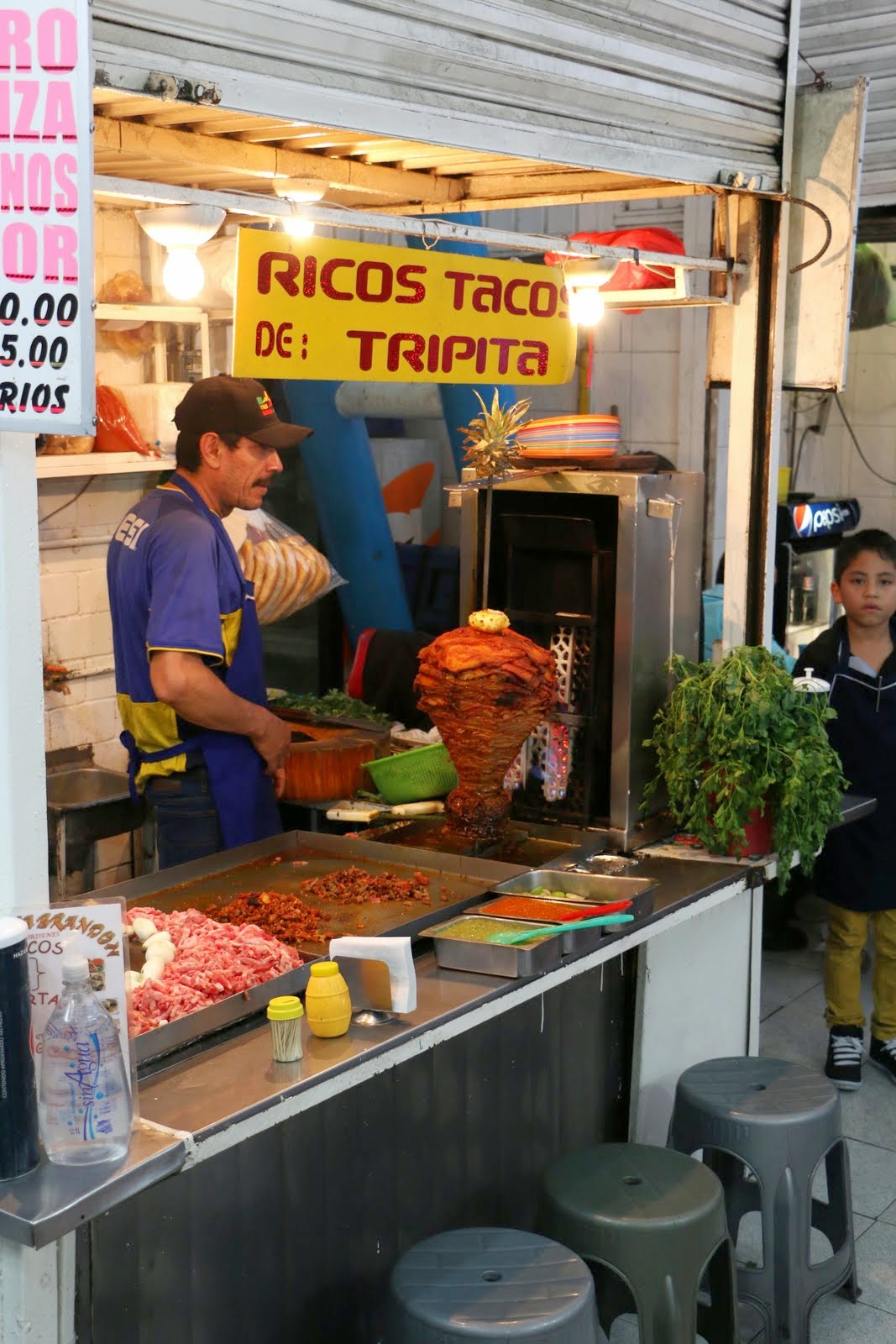 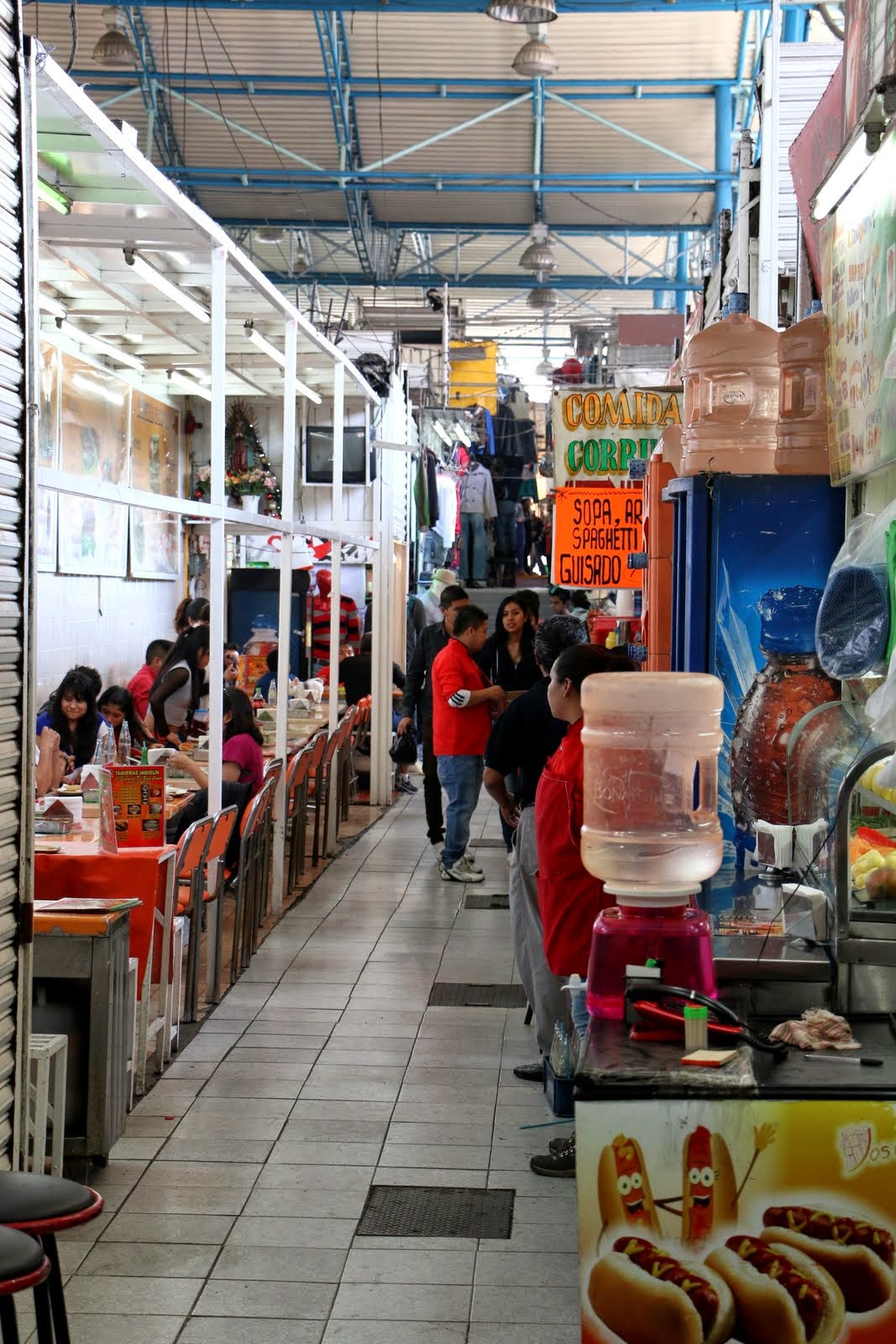 Watching over all this ajetreo, hustle and bustle, from a shrine at the top of a stairway, is the ever-present Virgen de Guadalupe, the Mother of Mexico. 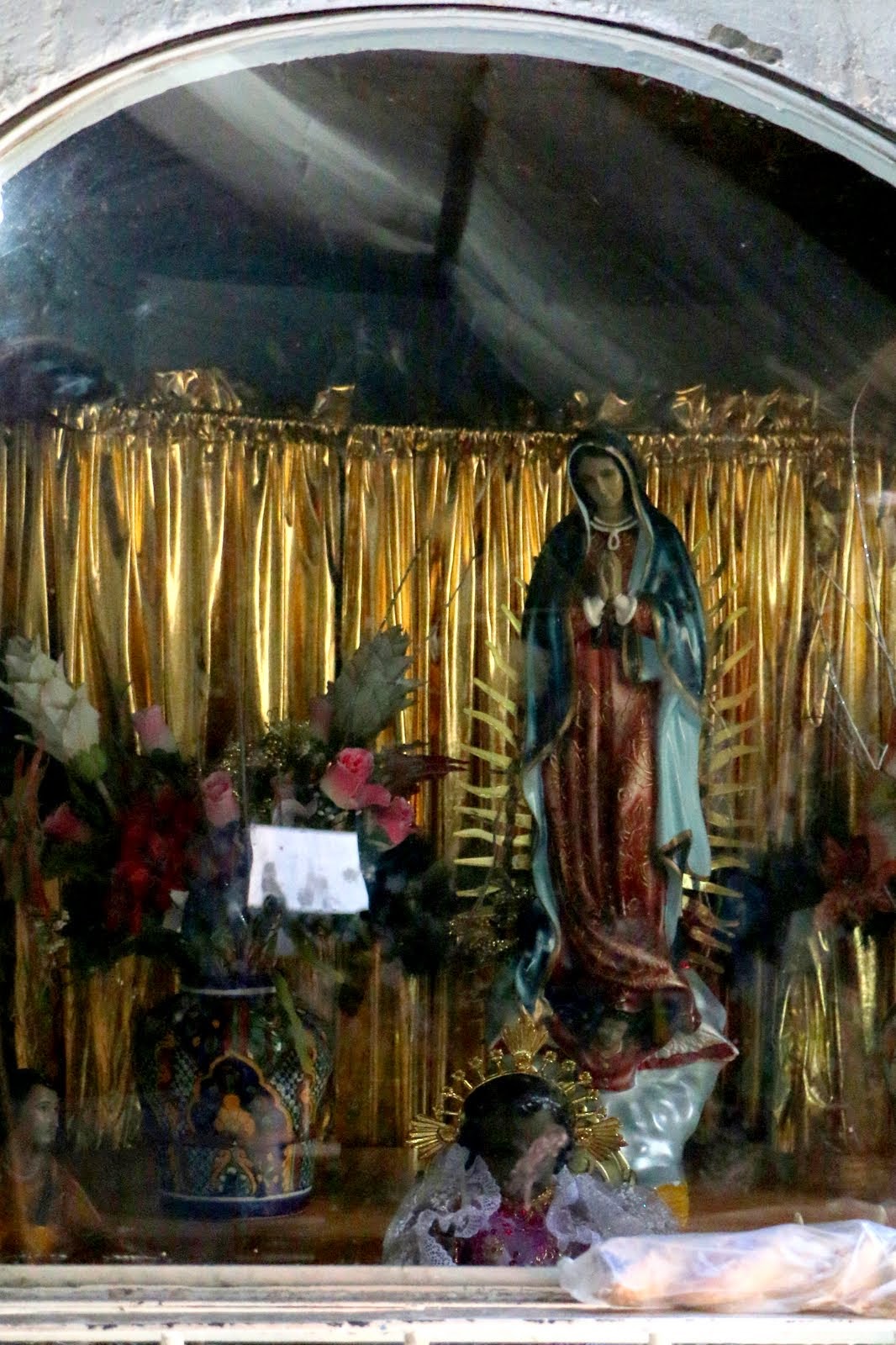 So, here in Pino Suárez, all of the core elements of Mexico meet: the indigenous Mesoamerican, the Spanish colonial, the cutting edge modern, and the eternal everyday mercado of selling and bying.
Posted by Reed Brundage at 7:55 PM