We live near Estacion General Anaya, the next to last stop going south on Line 2, the Blue Line (bottom, center of map). Our station is named after General Pedro María de Anaya, who led the Mexican Army in the Battle of Churubusco, on August 20,1847, against the U.S. Army to try to prevent its entrance into Mexico City. The battle occurred at the Ex-convento Churubusco, a fortress-like complex just west of the present station. Its location was strategic, as in controlled the road north to the center of the city.
That road was originally an Aztec/Mexica causeway, cuepotli, called Xolac, running from the southwest lake shore near Coyoacán. Today it is the eight-lane Calzada de Tlalpan. Line 2 runs along the middle of this highway, straight to the heart of both the Aztec/Mexica (Me-SHE-kah) and modern city, The Zócalo (center of map, just before the Blue Line turns west, following a second original causeway to Tacubaya).

One station is Xola, after the original name of the Aztec/Mexico causeway. Other names often relate to the colonia (neighborhood) in which they are located, such as Ermita, Portales, Nativítas or Villa Cortés. Others indicate a major cross highway, such as Viaducto, a major nearby institution (Bellas Artes, on Line 2 west of The Zócalo. Hospital General is a stop on Line 3, the Olive Line) Revolución, west of Bellas Artes on Line 2, is near the Monument to the Revolution. 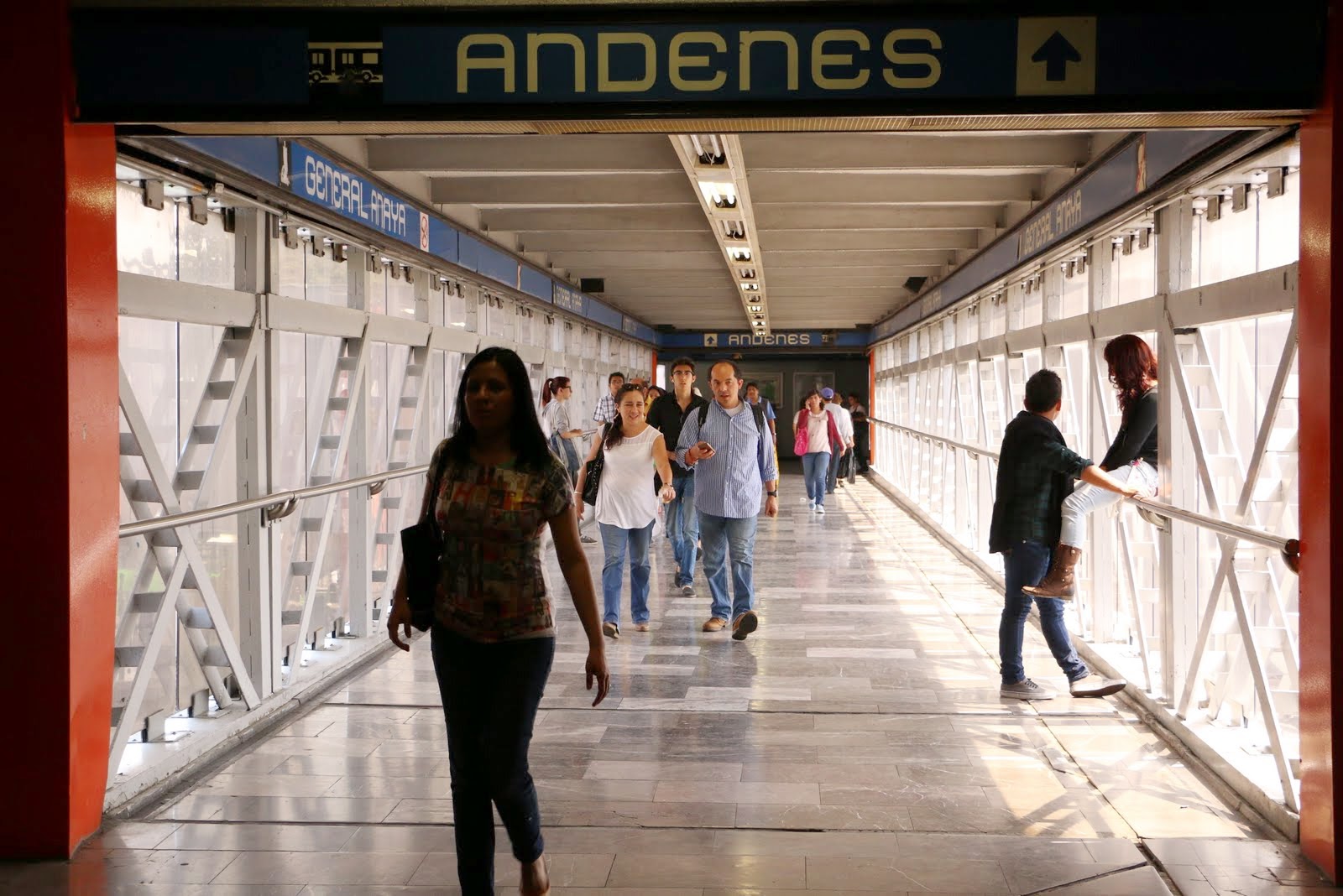 The stations have clear signage directing you to the platform (Andenes) and, on the platform, telling you which direction a train is traveling, that is, the name of the last station in that dirección. Heading north on Line 2, we go towards Cuatro Caminos (Four Ways, the four cardinal directions of the indigenous world). Heading home, we follow the sign for Tasqueña, which is also the location of the South Bus Station, where one gets buses to Cuernavaca and Acapulco. 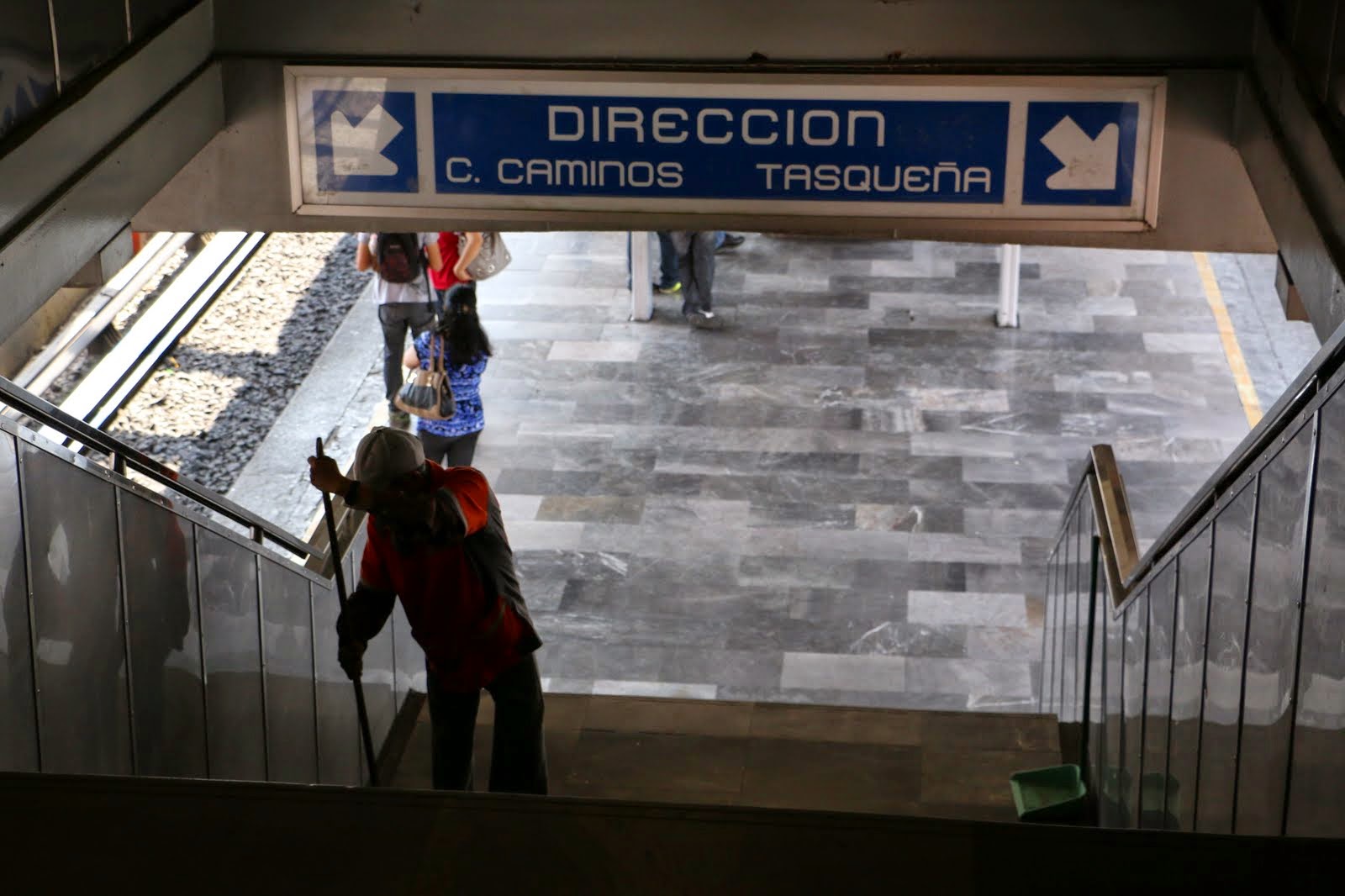 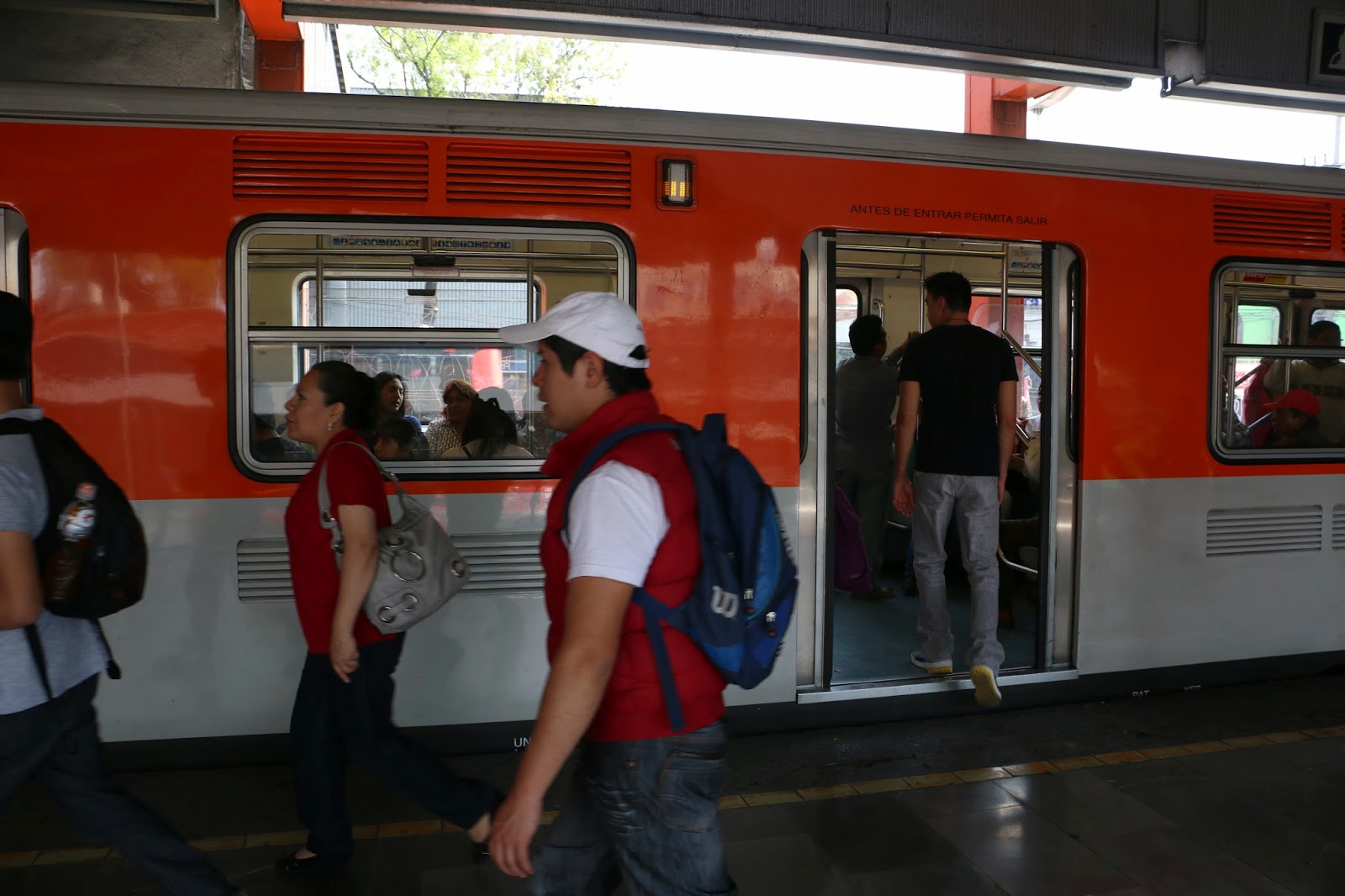 The rides, themselves, are an immersion in Mexican culture. In Mexico, wherever people gather, a market is created. On the Metro, this means vagoneros, vendors who walk through the cars hawking all kinds of products: CDs (which are loudly played through speakers strapped to the vendor's back), chicklets, cell phone earphones, books, you name it, almost always for diez (10) pesos ($.70US). 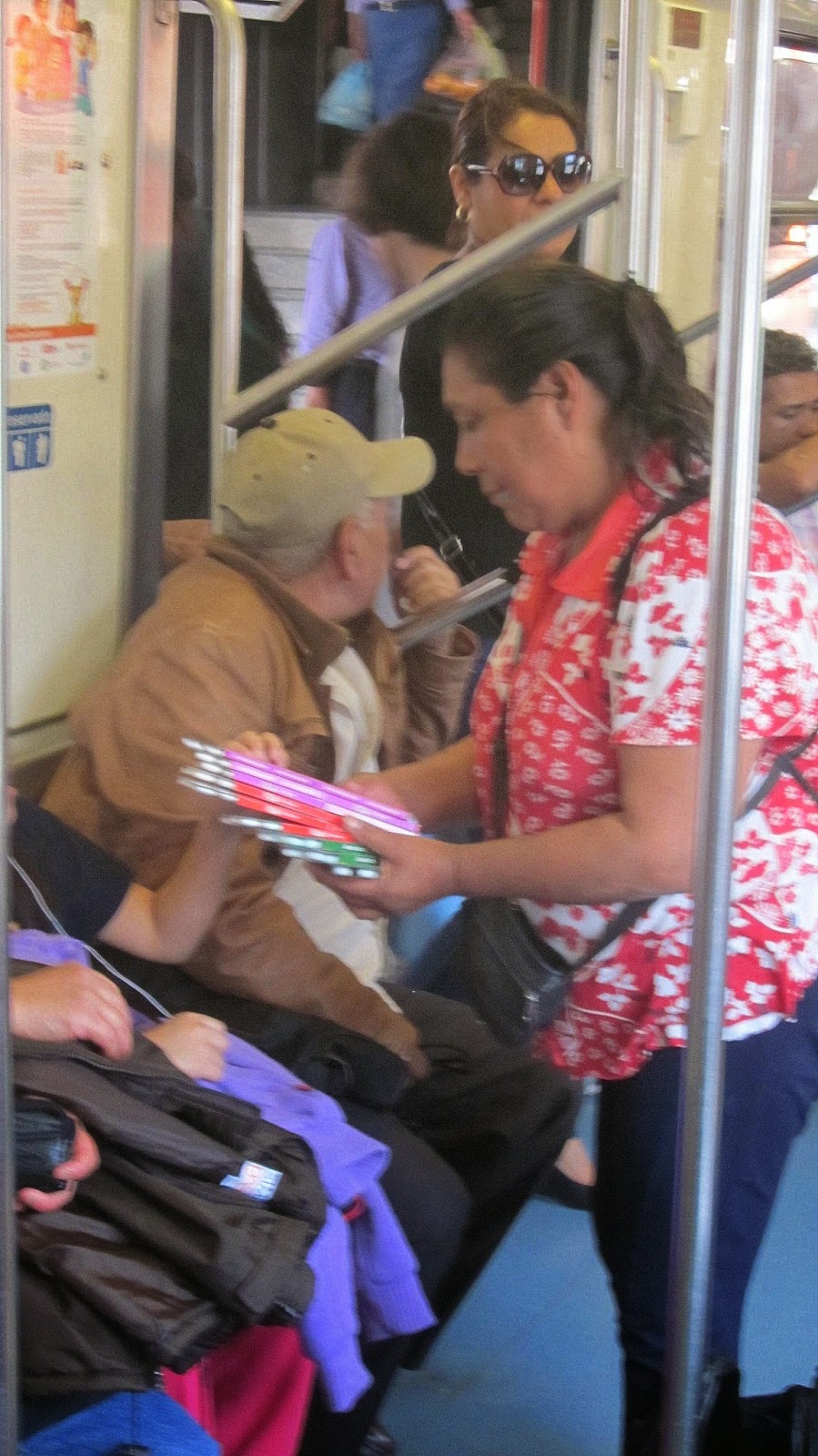 In 2014, the Distrito Federal (aka. De.Fe., Federal District) government initiated a campaign to get them off the trains. They offered to pay them the minimum wage (US$5 per day) for up to six months while training them for other jobs. In typical Mexican style, it didn´t work and they were soon back on the trains. 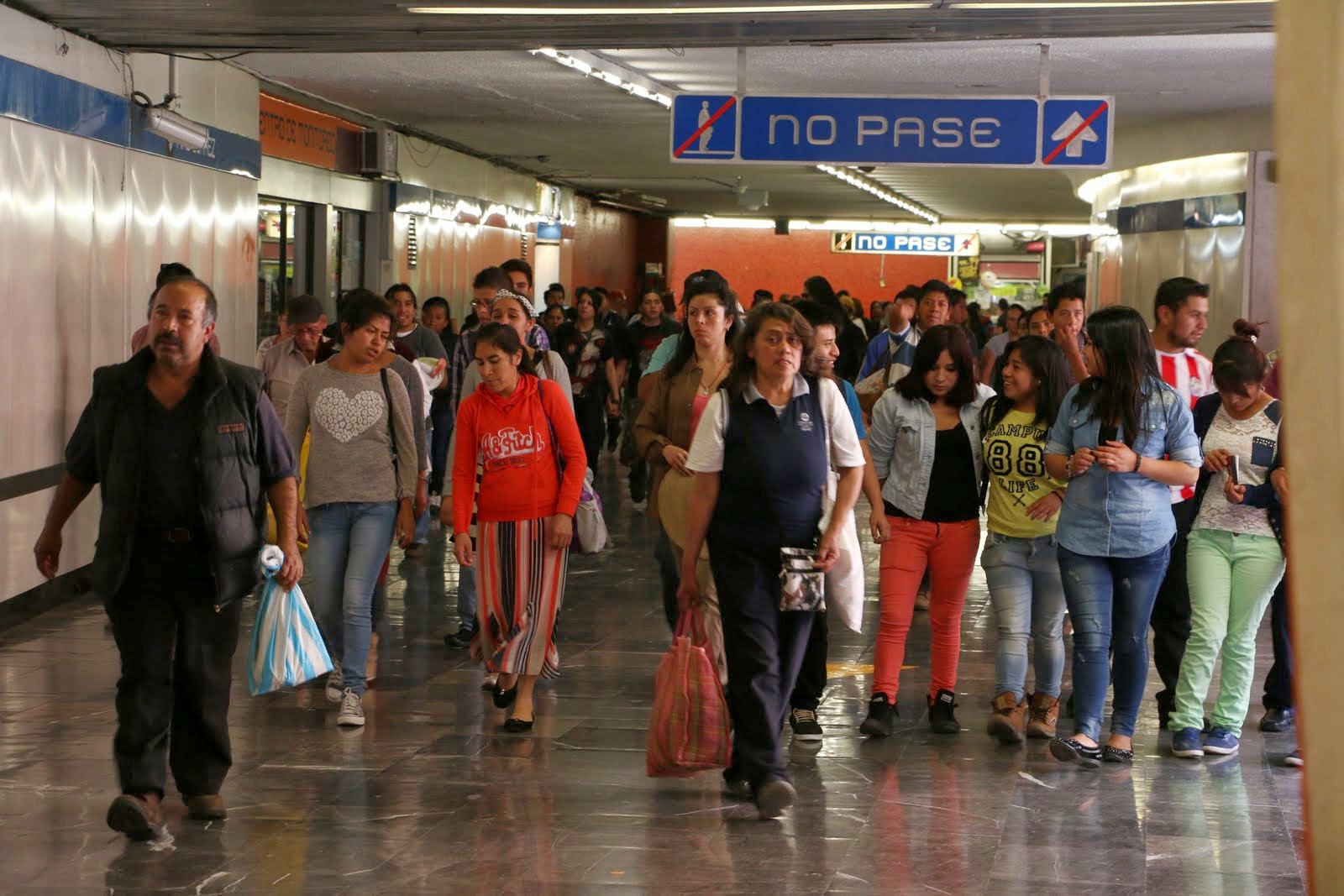 So get your cinco pesos out of your monedero, coin purse, buy a boleto, ticket, at the taquilla, ticket window, and ¡vámanos! Let's go!
Posted by Reed Brundage at 10:53 PM