The core of Delegación Cuauhtémoc, and of the city, is colonia Centro and at its core is The Zócalo. Its official name is Plaza de la Constitución. Literally, zócalo means pedestal, as of a statue, but it has come to mean this space at the center of Mexico.

The plaza is set within a massive frame, consisting of the Catedral Metropolitano on the north, the Palacio Nacional on the east, city govenment buildings on the south and hotels on the west.

What was once a market place and later a park-like plaza is now la plancha, a flat, paved open space occupied only by a huge flagpole bearing a huge Mexican flag. Like an empty stage, it calls to be filled with actors and drama. It often is.

The government of Mexico City (the federal government recently changed its legal name and status from being the Distrito Federal, Federal District) often stages huge public festivals. During Navidad - Tres Reyes (Christmas to Three Kings Day, Jan. 6), a three to four week holiday period, it sets up an ice skating rink, artificially snow-covered sledding runs and a gigantic artificial Christmas tree, a kind of Rockefeller Center South. A couple of years ago, Paul McCartney gave a free concert to tens of thousands.

Recently, for Valentines Day, which is a much bigger deal in Mexico than the U.S., the city government set up a huge stage in front of the cathedral where a series of bands played and then the Head of Government, aka. "mayor", Miguel Ángel Mancera officiated at a mass wedding for 1,690 couples of every sexual persuasion. Gay marriage is legal in Mexico City. Yes, in front of the Cathedral! 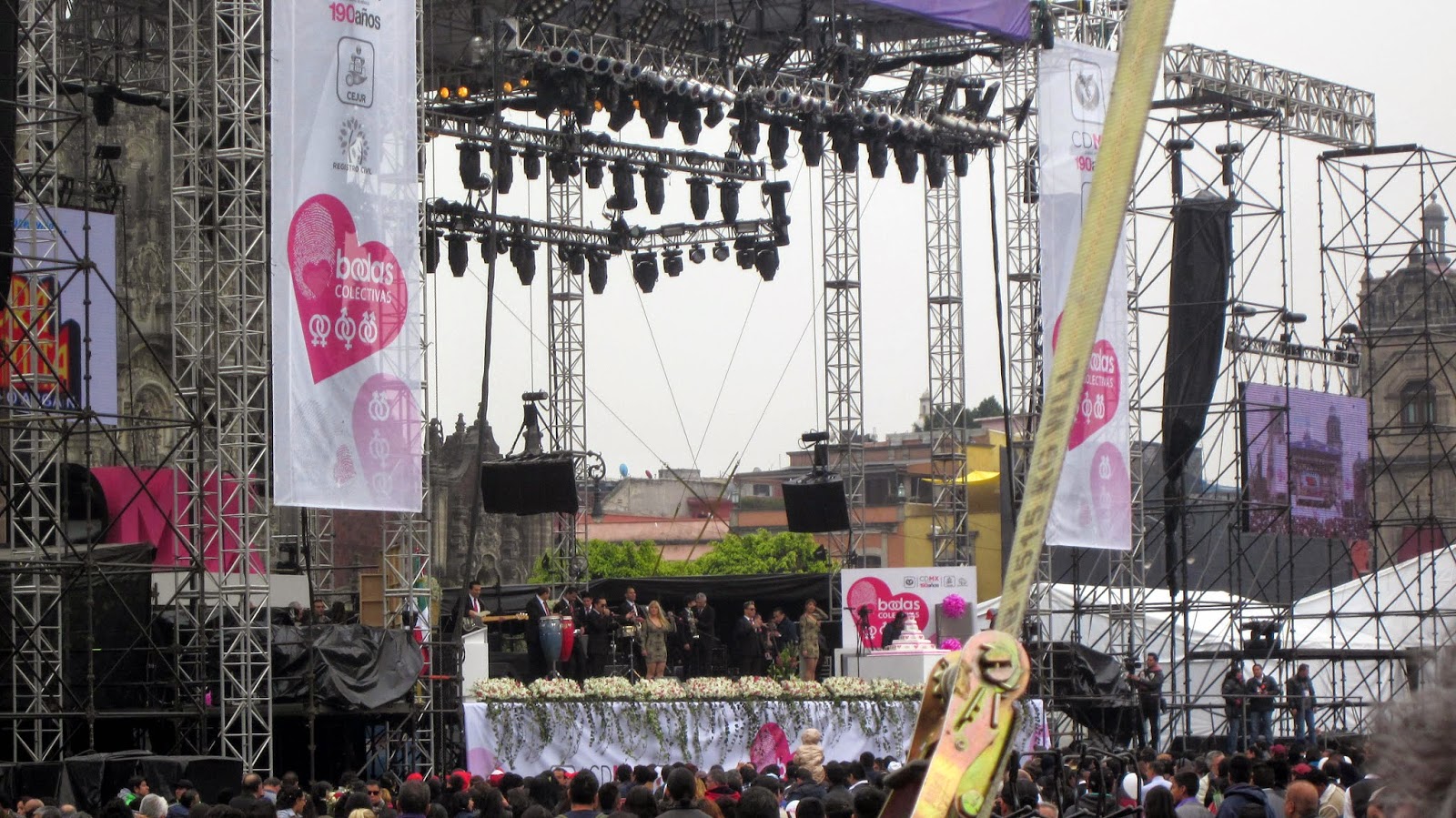 The Palacio Nacional has been the center of Mexico's government ever since the Spanish Virreinato (Viceroyalty), so it is the place where el gobierno, the government, and el pueblo, the people come face to face, sometimes peacefully, sometimes not.

On the night of September 15, the beginning of Día de la Independencia, Independence Day, the plaza is filled for "El Grito", the Shout of Independence, in which the president, from the center balcony of El Palacio, re-enacts Father Miguel Hidalgo's 1810 call for a popular revolt against the Spanish viceroy (not the king).


El pueblo, the people, consider the Zócalo to be el corazón del país, the heart of the country, and that it belongs to them, not the government. So it is often claimed by them, that is by popular organizations, and filled with mass demonstrations protesting a multiplicity of issues. These can be rallies at the end of marches through the streets, or even campamentos (encampments) of small tents and lonas (tarps) which can last for weeks and even months.

While demonstrations continue to occur, since September 2013, when a campamento of dissident teachers was forceably removed by police just before the celebration of Día de la Independencia  (Independence Day) on Sept. 15-16, no others have been allowed. Vamos a ver qué va a pasar. We'll see what's going to happen.

For a recent Mexican view of the symbolic political importance of the Zócalo to the Mexican people, see: The Zocalo Belongs to the People (La Jornada, June 27, 2016)
Posted by Reed Brundage at 9:36 PM