Captivated by the Palm Sunday initiation of Iztpalapa's Passion Play, we return on Good Friday for the climactic trial and crucifixion of Jesus the Christ.

Exiting the Metro Station, we find the wide Calzada Ermita-Iztapalapa filled not just with vendors on the sidewalks as they were last Sunday, but now the entire boulevard is full of carnival rides and stalls selling all kinds of items, including some craftwork.

We had been warned the crowd could be huge. There are plenty of people, but the muchedumbre, the crowd, is typical for a fiesta. We make our way slowly towards the plaza, where the central scenes of the drama will be enacted.

Entering the plaza, we pass a large statue of the Mexica tlatoani, speaker, Cuitlahuac, the last indigenous ruler of Iztapalapa.

As we walk along the side of the plaza that is open space, we see the Nazarenes, men and boys robed in purple, who were here on Palm Sunday, but this time instead of carrying light palm fronds, they are preparing to carry heavy crosses for the procession up Mount Calvary, i.e., Cerro de la Estrella, with its ancient history of human sacrifice. 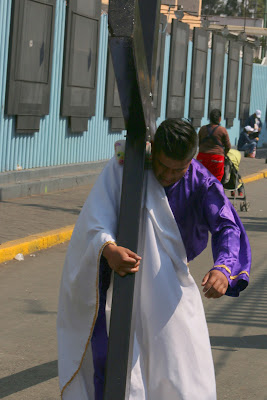 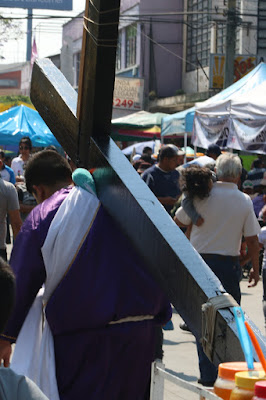 As we approach the site of the play on the west end of the plaza, we are anxious about whether too big a crowd has already gathered to make it difficult, if not impossible, to get into a good position to photograph the action. We are relieved to find we can get close to the side of the first of two stages, one where preparations for action appear to be taking place.

We do not have long to wait. After a brief welcome is announced over the PA system, a cadre of Roman soldiers, bearing trumpets takes the stage, which is an ornate Roman palace consisting of three levels. 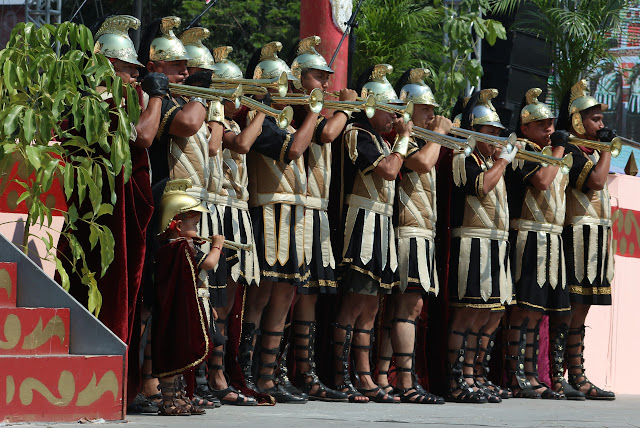 The trumpeters announce the arrival of the Jewish Sanhedrin, the council of priests and elders of Jerusalem.

While the council is debating, Judas Iscariot, the disciple who, following the Last Supper on Maundy Thursday, had betrayed Jesus in the Garden of Gethsemane, shows up, repenting of his betrayal of his Master and seeking to return the coins he was paid by the priests. (We did not attend those Maundy Thursday scenes, as they were enacted after dark on Cerro de la Estrella. As it happened, there was also an unseasonably early thunderstorm with heavy rains that evening. The rainy season usually starts in May.) 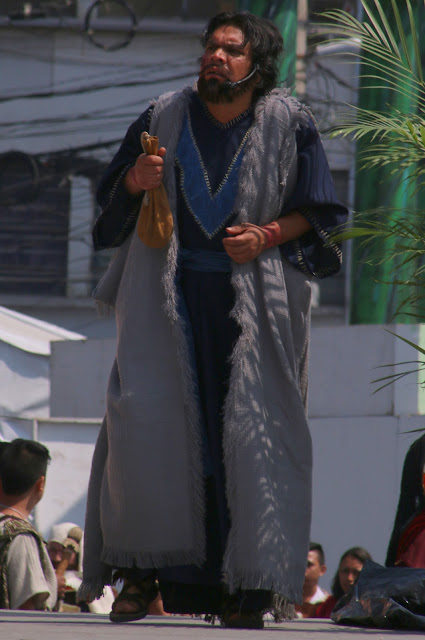 When the scene ends, we assume that the next one will be on the other stage, so we hurry around the outside of the crowd to find the best possible position there. As it happens, the next scene is on the same stage as the first. The palace has become that of Pontius Pilate, and Jesus is brought before him.


As we are several yards away, it is difficult to get good shots.

Pilate sees the problem as one of internal matters of the Jewish community, and also that Jesus' preaching had mostly taken place in Galilee, territory controlled by Herod Antipas. So he sends him to Herod (and the stage near where we are standing). 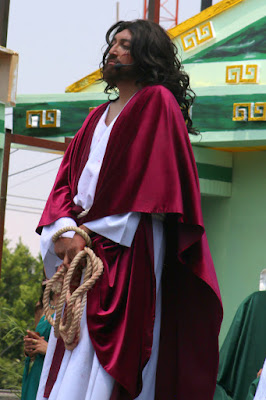 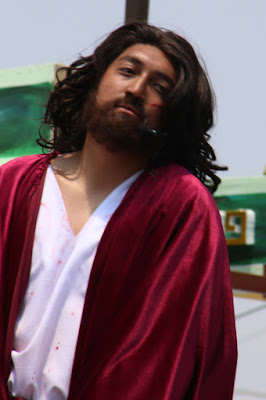 Neither does Herod want to take responsibilty for the fate of Jesus, so he sends him back to Pilate.


While Roman soldiers and Jewish leaders prepare for the procession through the streets of Jerusalem/Iztapalapa, the followers of Jesus gather to accompany Him in the final hours of His Passion. 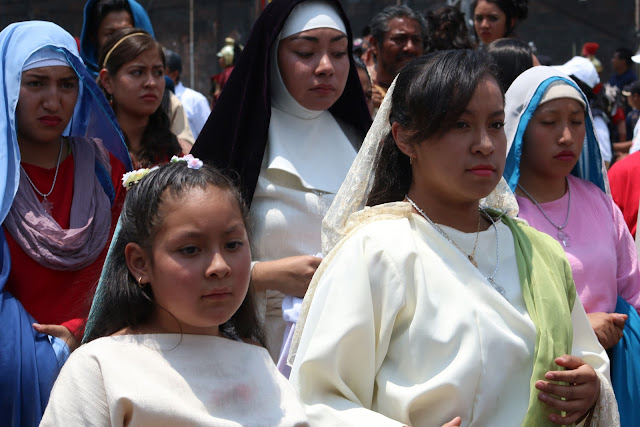 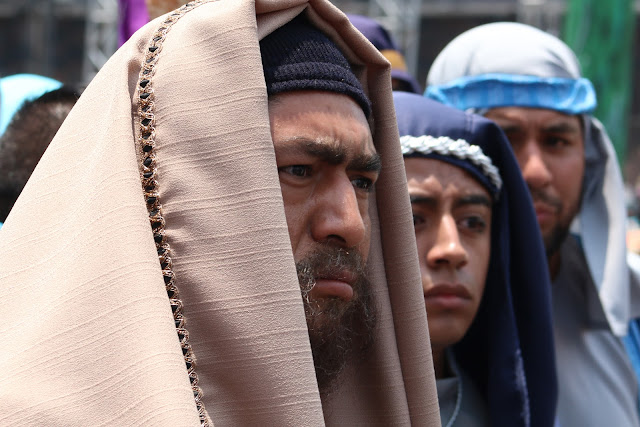 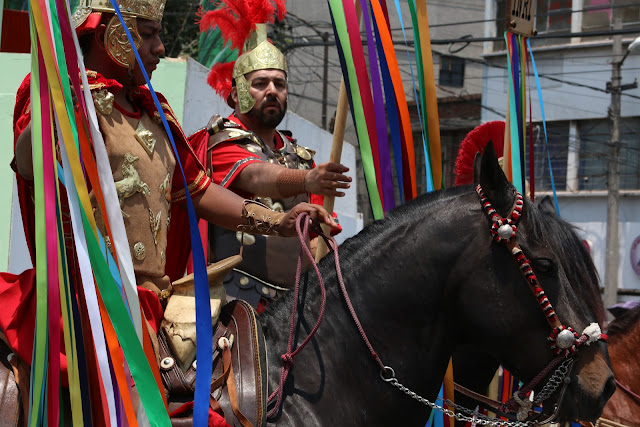 We don't have the stamina to follow the procession through the streets of Iztapalapa, let alone to climb Cerro de la Estrella, but before we leave, we make one last stop at a site that is significant to the history of the Passion Play of Iztapalapa.

Lord of the Little Cave


Returing to Calzada de Ermita-Iztapalapa, we cross to where there is a large cemetery. Just to its east is the entrance to the atrio of a church, the Sanctuary of the Lord of the Little Cave. It is here, acutally, that the tradition of the Passion Play of Iztapalapa began in 1833.

According to local tradition, the Lord of the Little Cave is an image originally from Etla, a pueblo in Oaxaca (in southern Mexico). Around the year 1687, the stewards of the image brought it to Mexico City with the purpose of having it restored. Before arriving in the capital, they had to spend the night in one of the caves on Cerro de la Estrella. The next day, when they wanted to continue on their way, they found that the image had markedly increased its weight, making it impossible to carry it. For the people of that time, this meant that the effigy had chosen to stay in that place. The inhabitants of Iztapalapa adopted it as their own and built a modest hermitage at the entrance to the cave.


In 1833, a cholera epidemic hit several parts of Mexico. In the Valley of Mexico, the epidemic killed many people. The people of Iztapalapa went to the image of the Lord of Little Cave and prayed to Him to save them from the disease. They promised that if He delivered them, they would carry out a procession and build a new sanctuary for Him. Miraculously, on May 3, 1833, the Feast Day of the Holy Cross, the epidemic came to an end. In gratitude, the people of Iztapalapa built the current Sanctuary and began to hold a procession on the Feast of the Holy Cross. Ten years later, during Holy Week, they began the reenactment of Passion of Christ. At first, only carved images were used. Beginning in 1906, members of the barrios of Iztapalapa acted the roles. (Wikipedia en español) So in 2018, its 175th enactment is being carried out—not all that old by Mexican standards.

But the synthesis of Catholic beliefs and ritual with indigenous community identity goes back to the Spiritual Conquest that began in the 16th century. It is the path that we have been following for the past year, exploring the original villages of the City, marked by their old churches. The Sanctuary of the Lord of the Little Cave is relatively new, but it embodies this old marriage of cultures.

As we walk across the large atrio toward the church, we realize that another procession is getting ready to join the larger procession in the streets. It is composed of more Nazarenes.

Following the cross and two lines of Nazarenes is a group carrying a covered object, where usually a statue of a saint would stand. We ask a couple who are watching if they know what is under the cloth. They tell us that it is el Señor de la Cuevita, the Lord of the Little Cave.

Once again, as in all our experiences of the fiestas of the original villages of the city, we feel the power of tradition and ritual for maintaining and reinforcing ancient communal identity. The gods and their representations have changed, but the continuity of pueblo life is bien arraigado, deeply rooted and retains its vitality.

In the reenactment of the Passion of Christ, we also sense that not far below the surface is an identification with His suffering that symbolizes and expresses the centuries-long suffering of indigenous communities of Mexico at the hands of their own version of invading Romans and oppressive, self-centered domestic rulers.

See also: Iztapalapa, Part I: Hill of the Star and the Origins of Culhuacán and Iztapalapa
Original Villages | Iztapalapa's Holy Week Passion Play: Part I - Palm Sunday
Posted by Reed Brundage at 11:27 AM