Xochimilco—“field of flowers” in Nahuatl—is now a delegación, or borough, in southeastern Mexico City. A UN-designated "World Heritage Site" world-famous for its canals and chinampas, these so-called "floating gardens" are actually man-made islands used for growing flowers and vegetables for sale in city markets.

These chinampas have a history that goes back more than a thousand years. But their current fame centers around the canals and the trajineras, flat boats, that traverse them. Poled by local men, trajineras carry tourists though parts of the labyrinth. On weekends, especially, they constitute a kind of floating fiesta or party, with supporting trajineras providing fresh-cooked meals, beer and singing mariachis for the visitors. 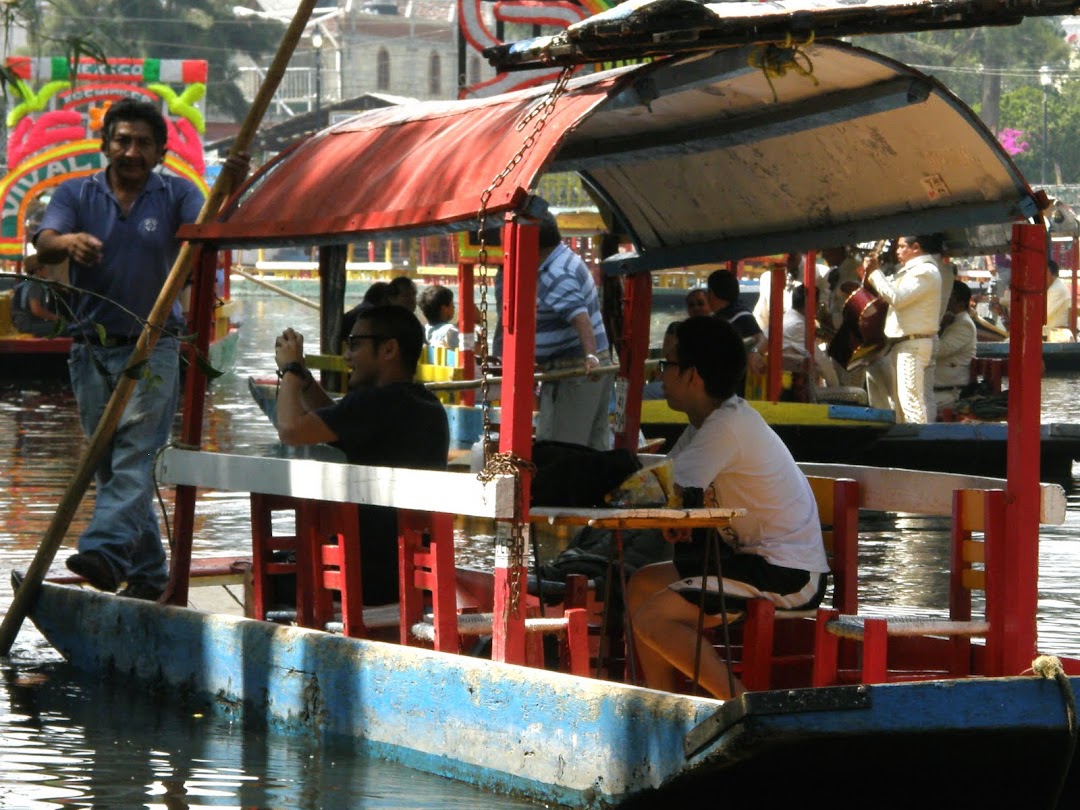 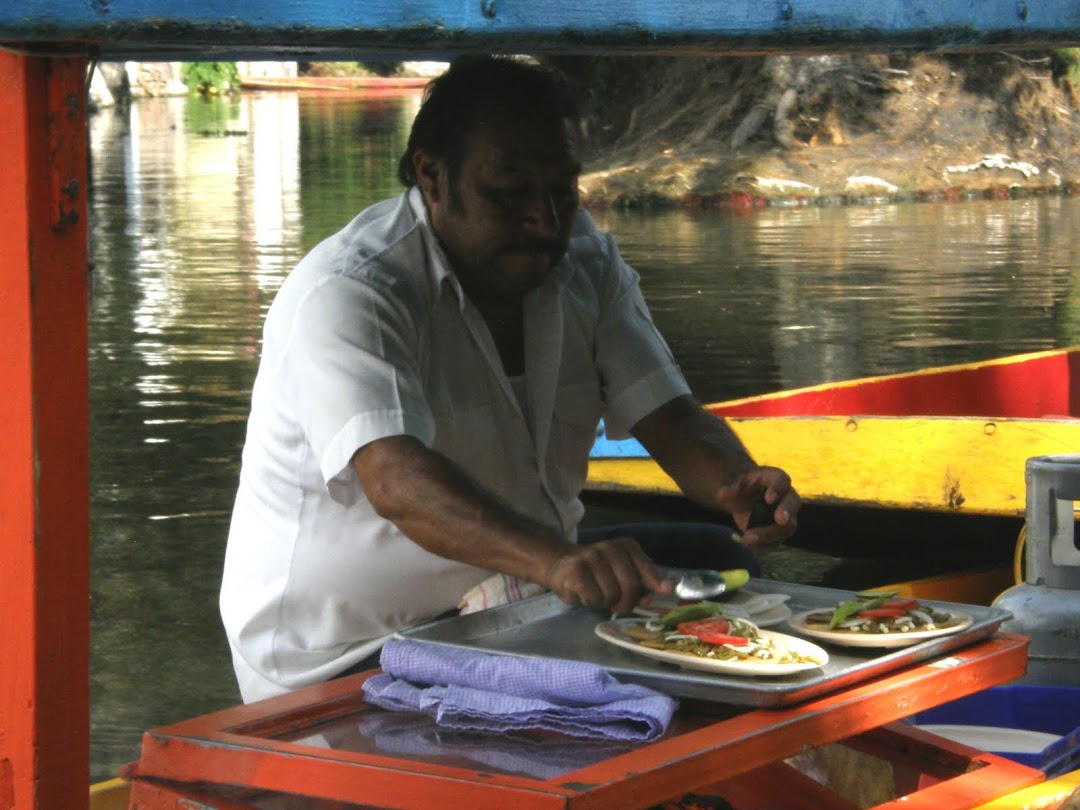 View 30 second film taken in 1912,
of an indigenous celebration on the canals

But behind this very Mexican-style show for tourists, Mexican as well as foreign, there is a long history and a very different side to Xochimilco.


Around 900 CE, the Xochimilca people, considered one of earliest of the seven Nahuatl-speaking tribes to migrate into the Valley of Mexico, settled on the south shore of the lake that would come to bear their name. Their first chief was Acatonallo, who is credited with inventing the chinampa system, which greatly increased crop productivity. These chinampas eventually became the main producer of crops of corn, beans, tomatoes, chili peppers and squash in the Valley of Anáhuac.

The altepetl, city state, of Xochimilco was founded in 919 CE, about three hundred years after the Toltecs had established Culhuacán on the peninsula on the north side of the lake. Over time, the city came to dominate other areas on the south side of the lake and across the mountains to the south, in what is now the State of Morelos.
In 1352, the tlatoani, "speaker", Caxtoltzin moved the city from the mainland to the island of Tlilan. Possibly, this was done to make it more defensible, like the island city of the Mexicas, Tenochtitlán, which was coming to be a rival. The island was connected to the mainland by three causeways. One of these still exists in the form of Avenida Guadalupe I. Ramírez, one of the borough's main streets.

In 1376, Tenochtitlán attacked Xochimilco, forcing the city to appeal for help from Azcapotzalco, the Tepaneca power on the west side of Lake Texcoco. The attack was unsuccessful, but Xochimilco then became a tributary of Azcapotzalco. Tenochtitlán finally conquered Azcapotzalco in 1428 and conquered Xochimilco in 1430. Shortly thereafter, the Mexica huey tlatoani, "chief speaker" Itzcoatl built the causeway or calzada to Coyoacán and Culhuacán that would also create a land route to Xochimilco.
During the reign of Moctezuma Ilhuicamina (the Elder, the First, 1440-1469), the Xochimilcas participated in the further conquests of the Mexica/Aztec Empire. For their service, they were granted autonomy in their lands.

When the Spanish arrived, Moctezuma Xocoyotzin (the Younger, the Second) imposed a new governor, Omácatl, on Xochimilco to take tighter control. With the chaos that followed the imprisonment and death of Moctezuma, other Mexica nobles took control of Xochimilco.
Because of Xochimilco's resistance, Cortés decided to attack the city before his final assault on Tenochtitlan. Using indigenous allies, he attacked on April 16, 1521. Although Cuautémoc, the last Mexica tlatoani, sent ten thousand warriors by land and two thousand by canoe to defend the city, the Mexicas and Xochimilcoans were defeated. After the defeat of Tenochtitlan in August 1521, the land around Xochimilco was granted, as an encomienda, to Pedro de Alvarado, one of Cortés' lieutenants. Wikipedia

Spiritual Conquest of Xochimilco
As they did in Tenochtitlan and in all the altepetls and villages around the lakes, the Spanish destroyed the ceremonial center of Xochimilco, called the Quilaztli. In 1522, Apochquiyauhtzin, the last tlatoani of Xochimilco, was baptized with the name of Luís Cortés Cerón de Alvarado and allowed to continue governing under the Spanish. .
Franciscan monks then came to the city. Construction of their first church, San Bernardino de Siena, and their convent or monastery was begun around 1535 on the site of the Quilaztli, in what is now the historic center of the Delegación Xochimilco. Like other churches of the Franciscans and other religious orders, it was converted into a parochial church in the mid-18th century.


Vestiges of the Spiritual Conquest: Many original barrios and pueblos

Today, like most of the Valley of Mexico, the original Xochimilco is almost swallowed up by the indiscriminate spread of the megalopolis that now covers most of the former lake beds and surrounding land. However, at its heart Xochimilco still retains living vestiges of an earlier world. In part, this is because its remaining canals and chinampas have been declared a World Heritage Site and Patrimony of the Nation of Mexico—making for tourist income. But even more so, these living vestiges remain because their extensive roots in the ancient indigenous world are still nurtured in original barrios and pueblos.

At the center of the old city are those landmarks that we have found at the core of the Spanish transformation of indigenous Mexico: a plaza, church (San Bernadino), ayuntamiento (town hall) and mercado. In Xochimilco, unlike in other colonial neighborhoods in the City, they all remain in place, alive and well.

Walking around this core, the heart of Xochimilco, we feel like we have entered a world apart from most of the rest of Mexico City. It feels like a city located in what chilangos, Mexico City residents, refer to as las provincias, Mexico's other states, with their more traditional, rural ambiance.
Circling this core are some sixteen barrios that made up the original indigenous altepetl on the island of Tlilan. Beyond them are another fourteen or so pueblos that were on the original mainland to the south. The contemporary delegación or borough also includes newer colonias.
It is to these barrios and pueblos originales that we will direct a series of Ambles. As there are so many, we expect to return to Xochimilco many times. 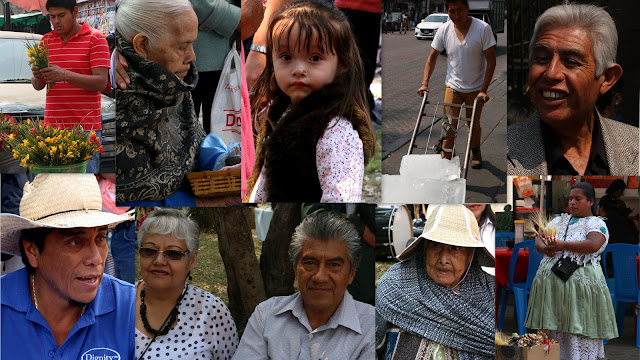