San Sebastián Xoco (HO-ko), at the southern border of Delegación Benito Juárez, is a pueblo originario, original indigenous pueblo, that, until a hundred years ago, sat in the countryside on the north bank of a small river the Spanish named Río Mixcoac, flowing from the mountains to the west, where it joined the Río Magdelena, coming from the south, to form Río Churubusco, which flowed east to Huitzilopocho (Churubusco).

It is now a tiny barrio walled in by the modern world, at the intersection of main avenues and three Delegaciones: Benito Juárez to the north, Coyoacán to the southeast and Álvaro Obregón to the southwest (the two are on opposite sides of Ave. Universidad, formerly the path of Río Magdelena).

To its north is the modern complex of San Ángel Inn Hospital, as well as modern apartment buildings typical of the predominantly middle and upper-middle class delegación, borough, that was developed as Benito Juárez after World War II.

To its east, along the broad Avenida México-Coyoacán, is the barrio's former traditional cemetery. Since the Reforms of President Benito Juárez, which took much property from the Catholic Church, it has been a public, but still traditional, Mexican one. In striking contrast, across narrow Calle Real Mayorazgo from the cemetery is the post-modern Cineteca Nacional, whose multi-plex screens show international films.

To Xoco's west, on Avenida Universidad, is one of the City's most upscale shopping malls, Centro Coyoacán, as well as a major international supermarket and the back-offices of an international bank. To the south is the elevated Río Churubusco expressway, which covers the "entubed" Río Churubusco. On the other side of the highway is Delegación Coyoacán.

Hence, Xoco is hemmed in and has been nearly obliterated by a wall composed of virtually all the components of the modern, global world.

But there are breaches in this wall. On each side of this intimidating monolith, there is an entrance, a narrow calleja, side-street. Real Mayorazgo (Inheritance of the Eldest Prince) crosses the barrio from east to west and San Felipe (St. Philip) from north to south. Entering either one of these, once we are behind the backs of the modern behemoths, we recognize that we are in a traditional barrio, with its modest houses and family-run shops open to the street. Arriving at the intersection of Real Mayorazgo and San Felipe, we come upon the small but still-living heart of Xoco.


Fiesta for a Visiting Child Saint

On a couple of initial visits to Xoco, we had found few people in the streets and the church closed. However, on the second visit, we noticed a banner hanging above the door of one house.


The announcement triggered several questions in our mind. We had heard of the visits of saints from one pueblo to another on the feast day of the receiving pueblo's patron saint. But San Sebastián's day is January 20. So we were intrigued that a saint was visiting at another time, in this case, shortly after Easter.

We were also intrigued that it was evidently another representation of the Niño Jesús, the Child Jesus, usually the center of Candelaria rituals on February 2. We also didn't know what the word 'pa' meant, as it isn't standard Spanish.

Thirdly, Xochimilco is not a nearby pueblo, but a large delegación some nine miles south. What, we wondered, was this visit all about?

So in the early afternoon of Monday, April 18, with great curiosity, we returned to Calle Real Mayorazgo. In the narrow street, we found a small fiesta in full swing.


A child saint honored with a birthday cake? (Later, we check and find that in Mexico, Day of the Child is celebrated on April 30. So it is close.)

We see a line of people entering and leaving a house whose modest door is decorated with an arch of fresh flowers. They are obviously paying some kind of a formal visit. So we follow them in. 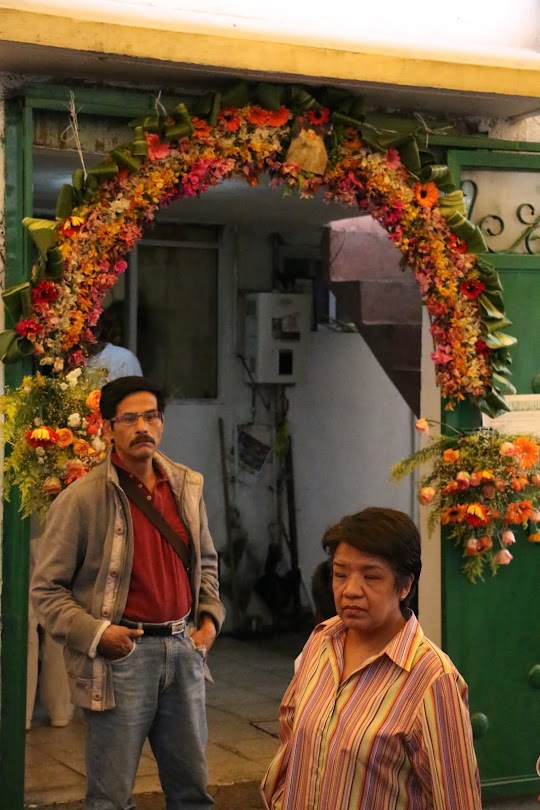 Inside a small, low-ceilinged room of cinderblock walls painted white, on a simple table, surrounded by more fresh flowers, sits El Niño Pa de Xochimilco. He is a simple wooden figure, dressed in an elaborate lime-green dress. People bow their heads in reverence and santiguarse, cross themselves. Some leave simple gifts of candy or flowers. We are even more puzzled and intrigued than before.

Shortly after we leave the house, El Niño is brought out into the street.

El Niño pa (we learn later from Wikipedia en español) is an image of the Child Jesus venerated since Colonial days in Xochimilco. It is a wooden sculpture carved in the sixteenth century from the wood of a native Mexican tree. Scientifically verified to be over 400 years old, it is considered one of the oldest images of Catholic worship in the Americas.

Spanish missionaries evidently created the image to represent the baby Jesus during Posadas. the "Inns", celebrations held in various streets of a barrio each of the nine nights before Christmas, reenacting Joseph's and Mary's search for a room in an inn in Bethlehem. He was placed in the custody of the indigenous chiefs of Xochimilco and then Spanish landowners. El Niño pa does not have a church dedicated to him but is under the rotating custody of the families in the pueblos of Xochimilco.

Currently, El Niño pa is overseen by a committee of representatives of various original pueblos of Xochimilco. Each Candelaria, on February 2, there is a major fiesta at which a new mayordomo takes responsibility for El Niño. He has to oversee El Niño's visits to various private homes during the year, for which he follows a list on which hopeful hosts have inscribed their names. As the list is long, it can take years before El Niño arrives in a particular home. So adults usually inscribe the name of one of their children or even grandchildren!

Clearly, that El Niño comes to visit to Xoco, far from his home in Xochimilco, is quite a special occasion. And a concrete expression of the links binding together the surviving original pueblos of Mexico City.

And the 'pa'? It's a mystery. Asking la gente, the people, we have been given various explanations: that 'pa' is short for padre, father, hence the child who is the father; that it is short for pan, bread, for the child who becomes "the bread of the world", and that it is a Nahuatl word for place, hence "child of this place." (Some time later, in Xochimilco, we confirm that this last interpretation is the correct one. It represents the tie of the Catholic Christian el Niño and his people, his pueblo of Xochimilco to their indigenous past. The name, like the dual Spanish and indigenous names of many Mexican towns, is another vestige of the Spiritual Conquest via which the two cultures were merged.

Church of San Sebastian the Martyr


It is a very short walk to la Iglesia de San Sebastián Mártir, St. Sebastian the Martyr. We have encountered San Sebastián before, in the original Spanish parcialidad, sector or quarter, of San Sebastián Atzacoalco, in Centro. Killed by Roman Emperor Diocletian in 288 CE, he is a popular saint in Mexico. We have come across several other churches dedicated to him. We will seek to visit some others next January 20, ójala, God willing.

Leaving the church, we begin our walk out of Xoco. At the intersection of Real Mayorazgo and San Felipe everyday life has returned.

Across the street from the church, our eyes are captured by a series of street murals such as we have seen in other original barrios and pueblos.


We walk east on Real Mayorazgo to return to Avenida México-Coyoacán, where we will hail a taxi back to Coyoacán. Passing the wall enclosing the cemetery, we realize where we need to end our amble in Xoco.

Entering the cemetery, with its wide center path and large, old trees, one has the feeling of entering a sanctuary, a primal sacred space.


Although the cemetery is now City property, rather than that of Pueblo Xoco, it is still a place of family and shared community, a place of old memories that are still alive.

And there are flowers everywhere.

So, in el Pueblo San Sebastian Xoco, tradition survives: in lively fiestas in its few remaining narrow streets, in a church bien cuidada, well-cared for, and in a panteón where los antepasados, those who have passed before, ancestors, are also bien cuidados, con respeto, dignidad y honor. And with muchas flores!

El Pueblo Xoco, the village and its people, despite being surrounded and powerfully impinged upon by new "gods"—the forces of the modern, global world—nonetheless, maintain their will for their communal identity to survive through their active cuidado of las tradiciones of old gods, both indigenous ones, and those of the Spiritual Conquest.

In 2018, in the process of excavations for another major residential tower and commercial complex in Xoco, on the site of the former bank offices, archeologists discovered human remains, pottery and remnants of structures that are some 1,700 years old. They demonstrate that the settlement was an extension of the power and culture of Teotihuacan, the major city in the northern end of the Valley of Mexico.

They also found artifacts from the later period of 600 to 1200 CE, when Tula, a city built by the Nahuatl-speaking Tolteca west of Teotihuacan, ruled the Valley. Artifacts from the time of Azcapotzalco domination (a city ruled by the Tepaneca on the west shore of Lake Texcoco) and then the Mexica (Azteca) (1200-1521) were also found, demonstrating that Xoco is a village that has been in virtually continuous occupation since 300 CE.