On the last Sunday morning in June, El Señor de la Misericordia, the Lord of Compassion, is traveling from Barrio Niño Jesús, where we left him last Sunday, to Pueblo Candelaria, (pueblo indicates a neighborhood larger than a barrio). Having learned that delivery of el Señor from one pueblo or barrio to the next, during his summer tour of visitas across Delegación Coyoacán, happen a tiempo, on time, we make sure to arrive before the scheduled hour of 11 AM at the corner of Avenidas Pacífico and Candelaria, in the virtual center of the borough.


Getting out of our taxi, we see people gathered on the northeast corner of Pacífico, the direction from which El Señor will arrive. Crossing the wide street, with its camellón, median strip of trees, we first notice un tapete de aserrín, a sawdust carpet in the southbound lanes, which have been closed to traffic. These colorful decorations are one of many medieval European Catholic traditions brought by Spanish friars to Nueva España. 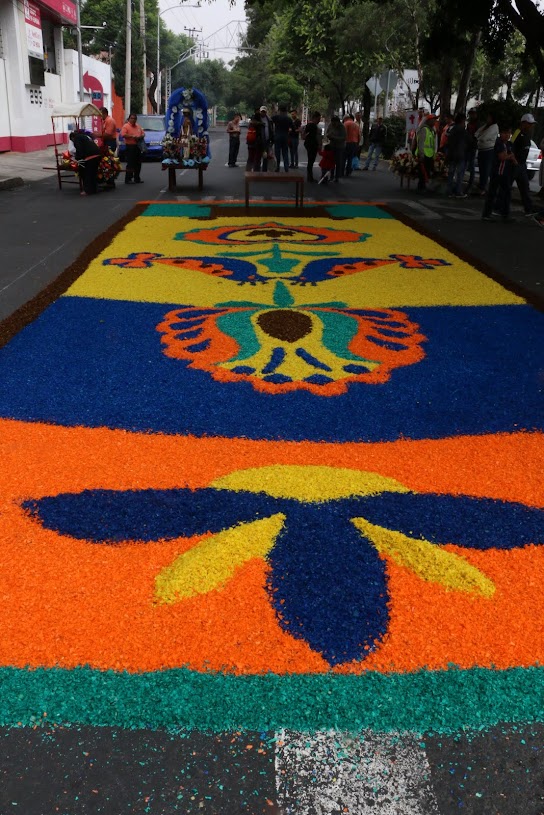 The tapete is a relatively simple one of floral designs, but their large size means they were drawn by hand, without the use of pre-cut stencils.

Then we notice, at the far end of the carpet, a gathering of small statues of saints, each on its equally small palanquin. We haven't seen this at el Señor's other encuentros, encounters, so we wonder what is happening. Approaching the compañeros, companions, of one of the saints, we ask.

In customary amable, kind/considerate, Mexican manner, they explain that this weekend (June 25) is the feast day of San Juan Bautista, St. John the Baptist, an especially important one in the year. So they have brought their saints from their various barrios, not only others in Coyoacán, but elsewhere in Mexico City and even from the state of Michoacán, some two hundred miles to the west (where we lived for three years) to join in this celebration.

San Juan Bautista, St. John the Baptist, is the patron saint of Villa Coyoacán, the upscale center of the delegación, and its large church where he is also being celebrated today. But this is something else, a celebration of el pueblo, the common people. We recall that he is also the patron saint assigned by the Franciscans to all of the original indigenous quarters of the Mexica city of Tenochtitlán, renamed San Juan Tenochtitlán, as well as to its lead parcialidad, quarter, San Juan Moyotla.

We suspect that the importance of St. John the Baptist in relation to the indigenous communities of Nueva España is due to his role as the first one to baptise people into what would become the new faith of Christianity. Hence, he represents the conversion of the "heathen" indios from their old gods to the new one.

St. James is the patron saint of Spain. A disciple of Jesus, James, the brother of John, is believed to have come to the Roman province of Iberia (now Spain and Portugal) to proselytize and establish the Christian faith. He then returned to Judea, where he was martyred. His remains were subsequently returned to Spain and are buried in the church at Compostela. He thus represents the foundation of Christianity in Spain independently of St. Peter and Rome.

During the Reconquest of Spain from the Muslim Moors, it is believed that St. James appeared during the Battle of Clavijo, in 844 C.E., bringing victory to the Christian forces. He then became known as Santiago Matamoros, St. James the Moor Slayer. He is always represented astride his white horse, a Moorish soldier trampled beneath its stamping feet.


He is a popular saint in Mexico. In an indigenous Purépecha church dedicated to him in Michoacán, he is dressed as a vaquero, Mexican cowboy, in sarape and sombrero. As with St. John the Baptist, we think his popularity is related to his symbolizing the victory of Christianity over heathen faiths, a task accomplished once again in the Spirtual Conquest of Mexico.


As we are contemplating the significance of the hagiography represented at this street corner, we hear the familiar sound of cohetes, the rocket-style firecrackers that announce the arrival of another saint.

Proceeded by dancers in charro dress, elaborate gentleman/lady cowboy/-girl costumes typical of the western state of Jalisco, a brass banda and coheteros (shooting the cohetes), a large palanquin approaches up Pacífico from the south. It bears a grand queen, dressed in white, holding a child, also in white, and other smaller saints.


La Virgen de Candelaria is the Virgin Mary at the moment when she presents her infant son at the Temple in Jerusalem, traditionally celebrated on February 2, the mid-point of winter and forty days after his nacimiento, birth at Christmas. She is the patron saint of today's host pueblo. With her arrival, all is ready for the reception of el Señor de la Misericordia.

While we are waiting, with our inveterate curiosity, we approach the charro dancers whom we have not previously encountered at fiestas, to inquire about their participation and their origins. 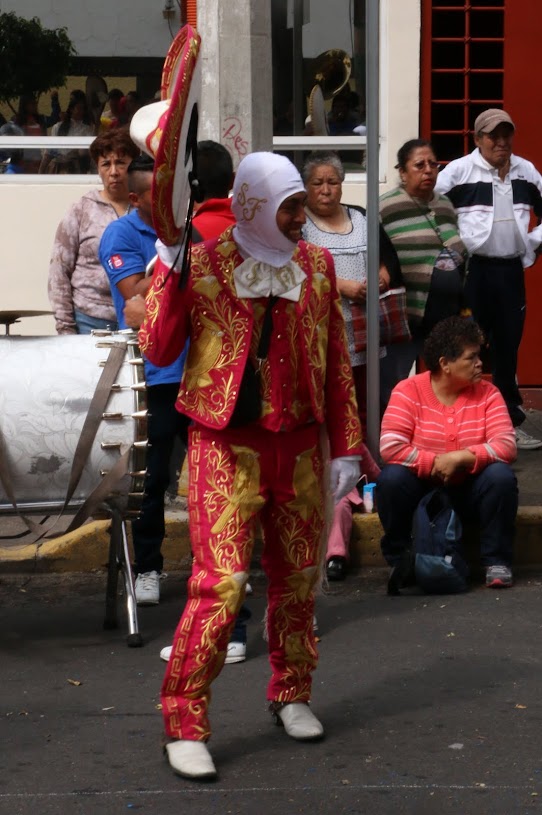 The lead charro tells me they are Comparsa San Francisco, a dance troup that accompaines fiestas from San Francisco Culhuacán, a large, originally indigenous pueblo at the eastern edge of Coyoacán. We tell him we plan to visit their pueblo at a later time. The charro dress is an expression of mexicanidad, Mexicanness. It is a very colorful, ornate, dare we say Baroque, Mexican variation on a Spanish theme. The Mexican charro tradition derived from Spanish horsemen who came from Salamanca and settled in Jalisco.

At this point, the sounds of cohetes coming from further up Pacífico tell us that el Señor is approaching. 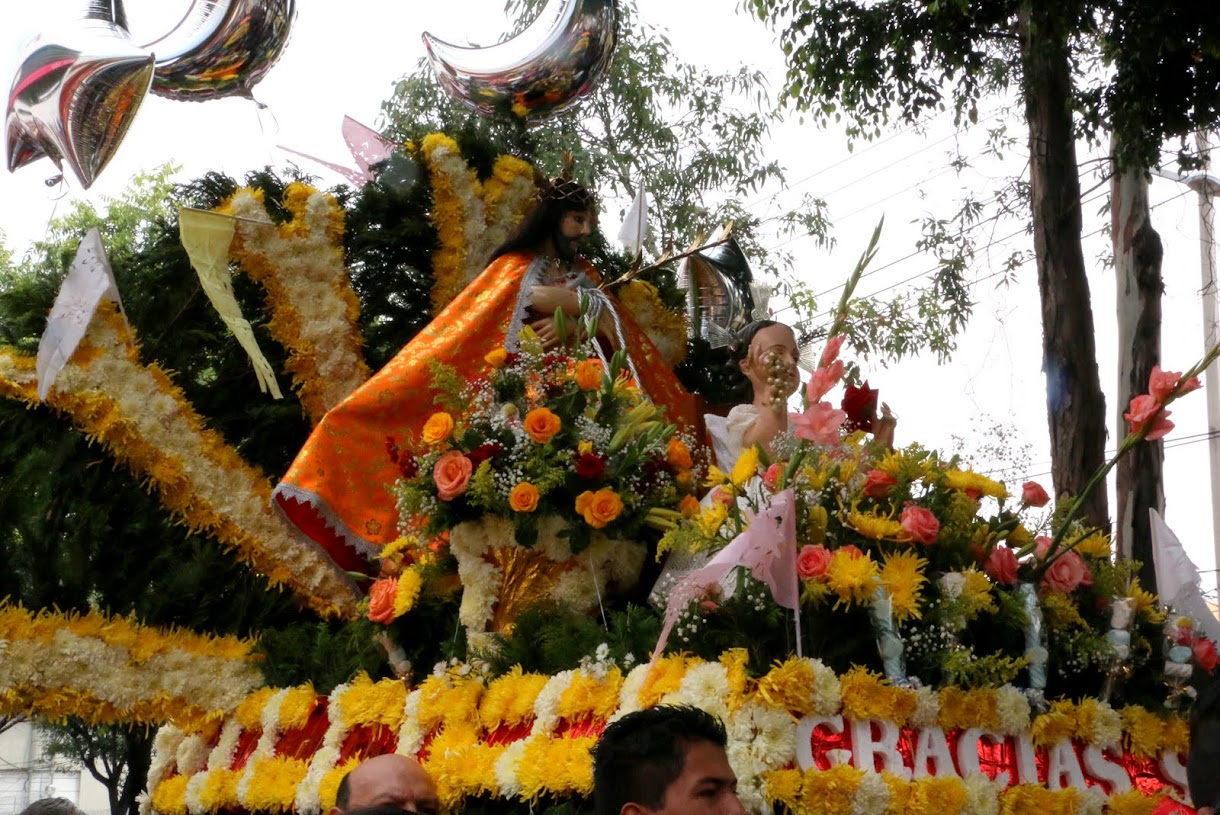 The Lord of Compassion arrives, accompanied by el Niño Jesús, the Child Jesus, his host for the past week, who also represents the events of Candelaria, but for his own barrio.  Their flower-bedecked palanquin is as elaborate as that of the Virgin's. Perhaps the meeting of Mother and Son, in his two representations as Child and in His Passion, increase the importance of this particular encounter. Pueblo Candelaria is also right next door to Pueblo Tres Santos Reyes, el Señor's home base.

Accompanied by cries of "¡Viva!", "Long live!", el Señor is removed from his palanquin and carried to that of la Virgen, where he is carefully placed among the group of saints. 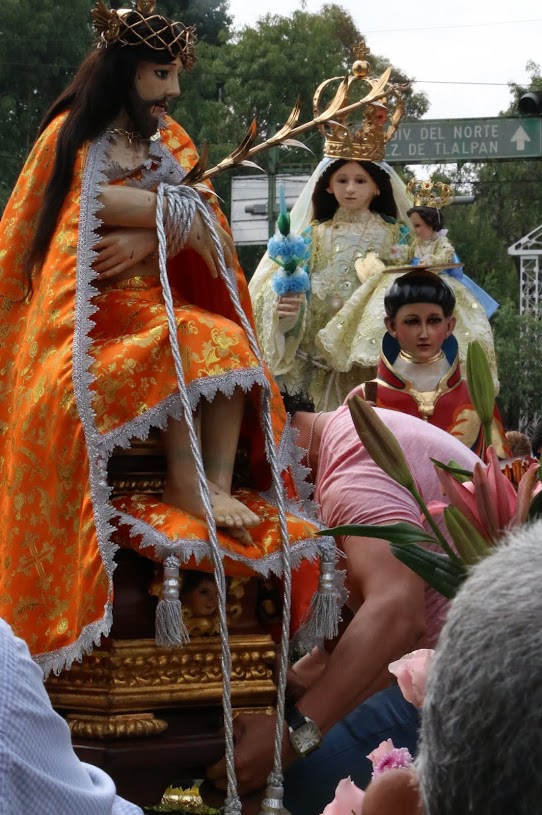 
With el Señor firmly in place, the confradía, brotherhood of the parish of Pueblo Candelaria, starts the procession of saints down Avenida Pacífico, toward their neighborhood. As we watch the palanquins go by, bedecked in hundreds of roses, chrysanthemums and other flowers, with the charro dancers and two bandas accompanying them, we can't but think of the Rose Parade of Pasadena, California. We opine (Mexican writers use this verb a lot) that that commercial affair has nothing on this delightful home-made version, which is also certainly older.

A few blocks south, we reach the arch marking the entrance to el Pueblo Candelaria. 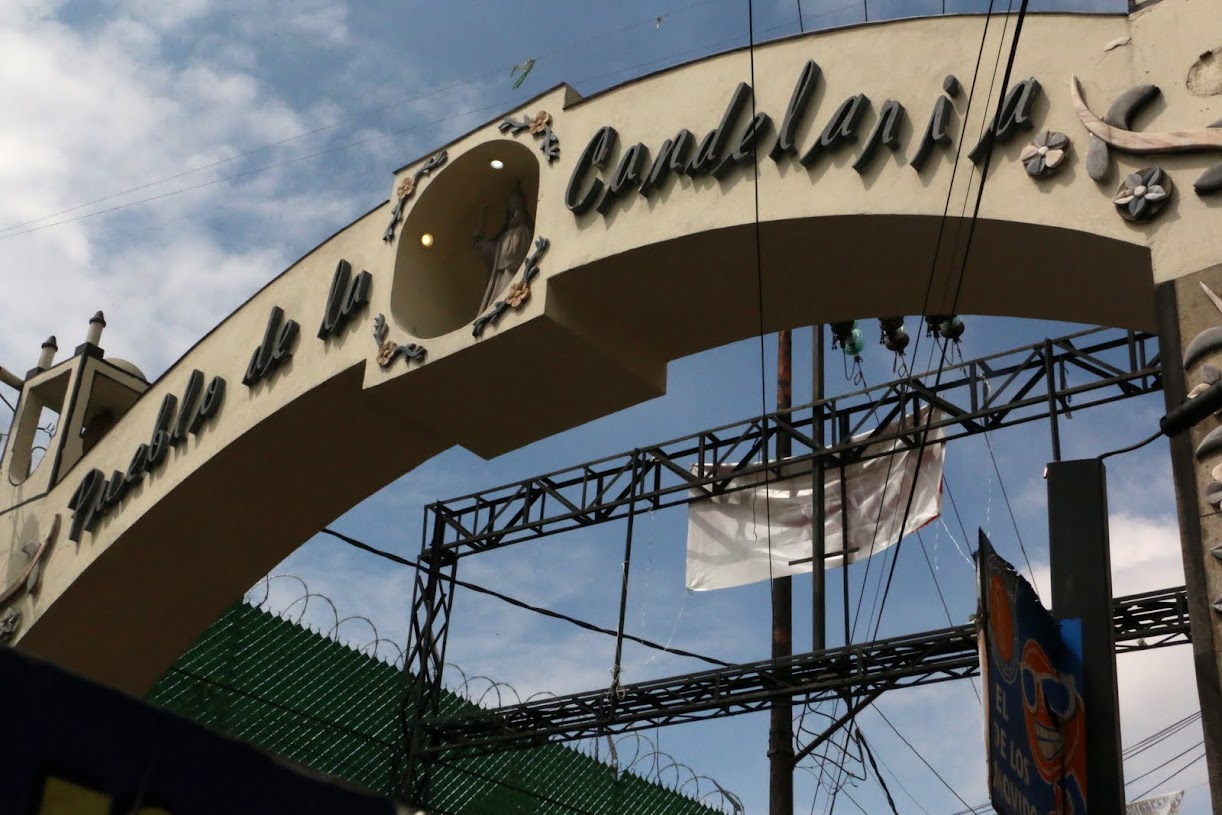 The pueblo, like virtually all the original settlements in Mexico City, is distinguished by its narrow callejas, side-streets, which were created long before invention of the automobile.

A few short blocks along, the procession arrives at the church. A traditional portada of flowers surrounds the entrance to the simple, modern edifice. 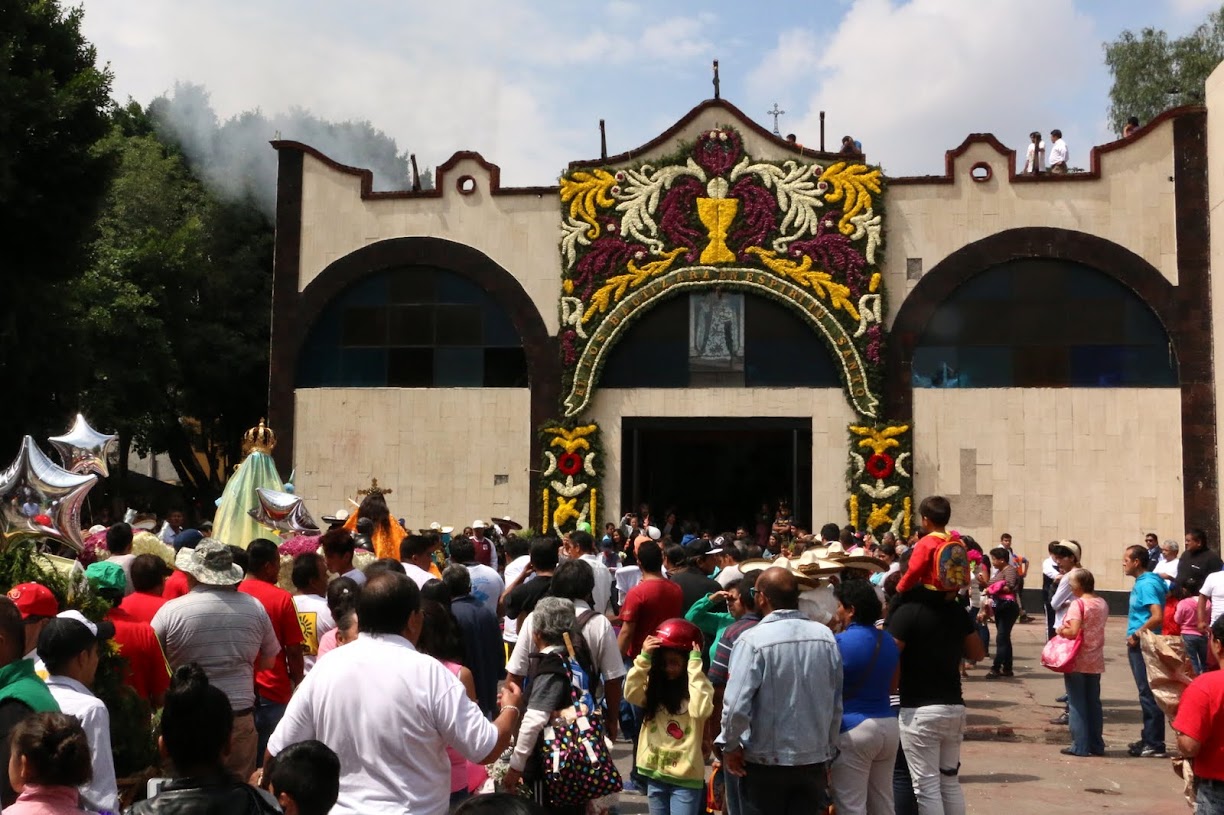 The original iglesia was built early in the 16th century. Records of it go back to 1577. In the 1950s, the building was razed to make way for construction of the current church.

El Señor is lowered from the palanquin, followed by his host, la Virgen, and the other attending saints. This time, a new touch is added to the reception. 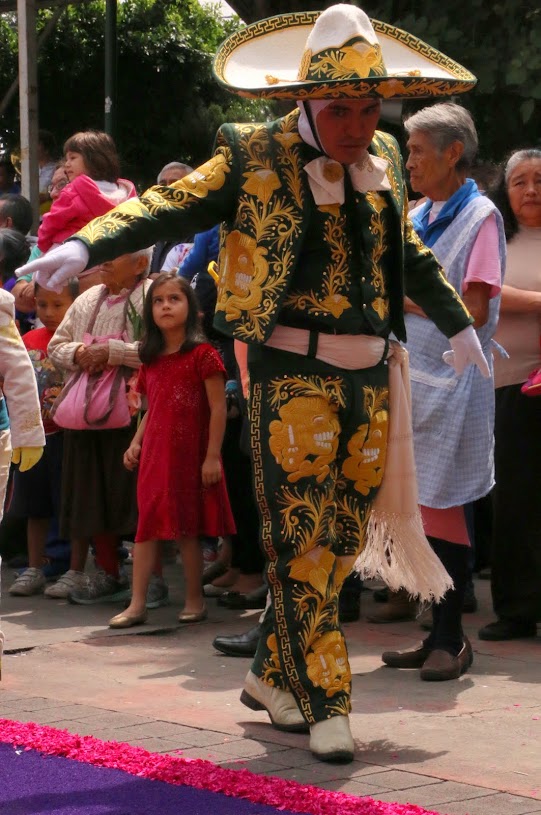 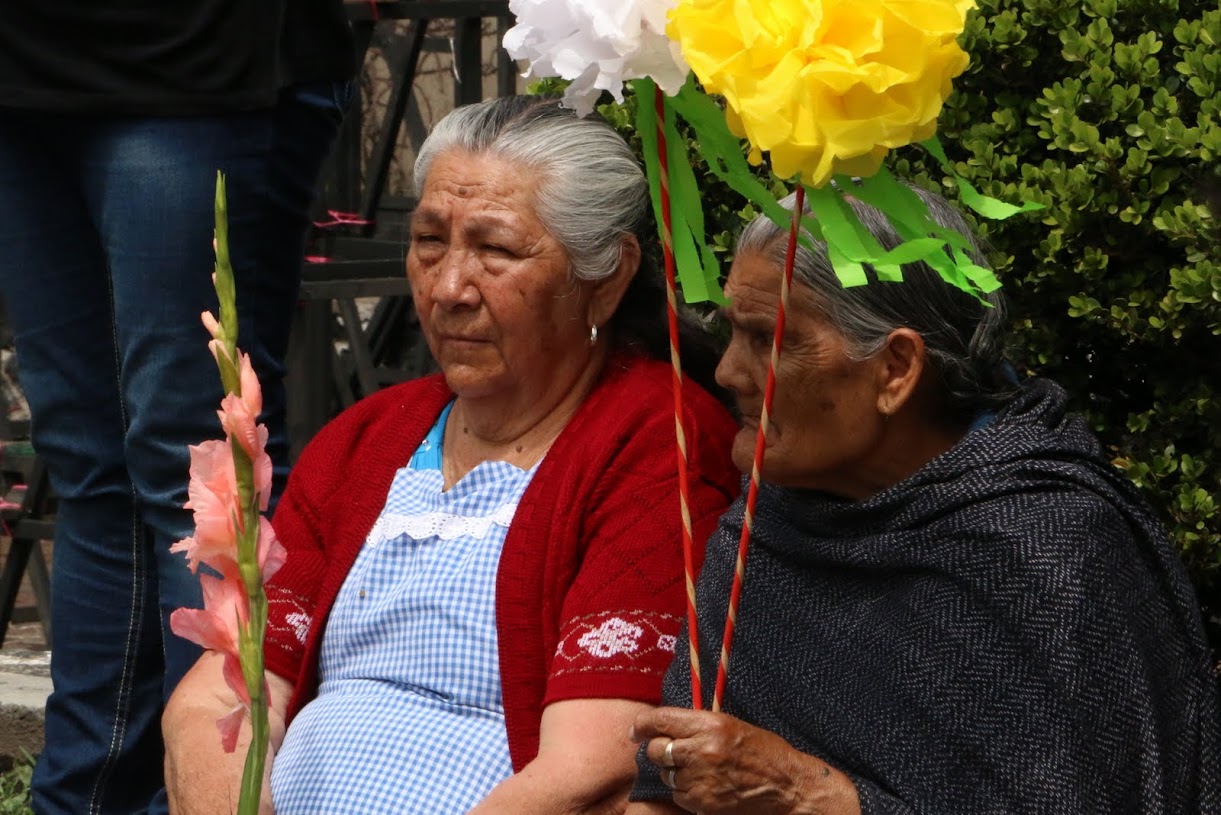 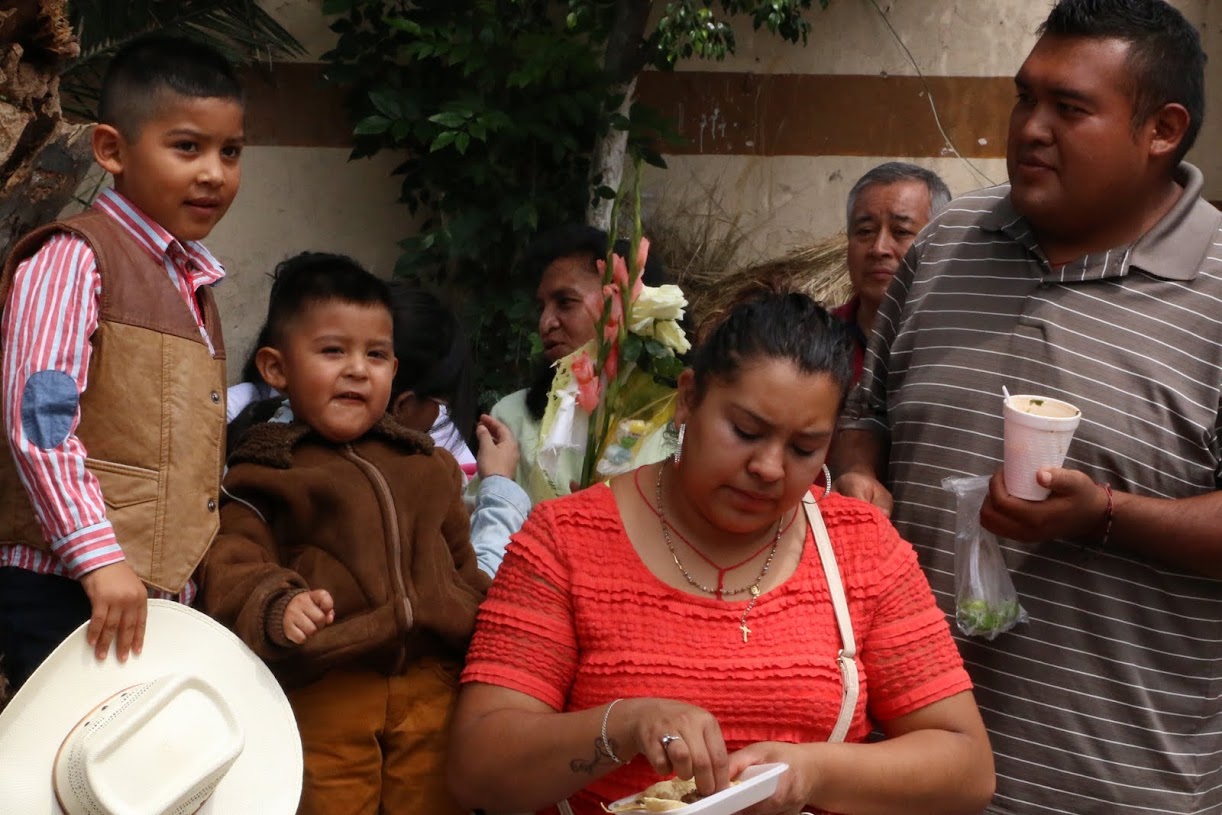 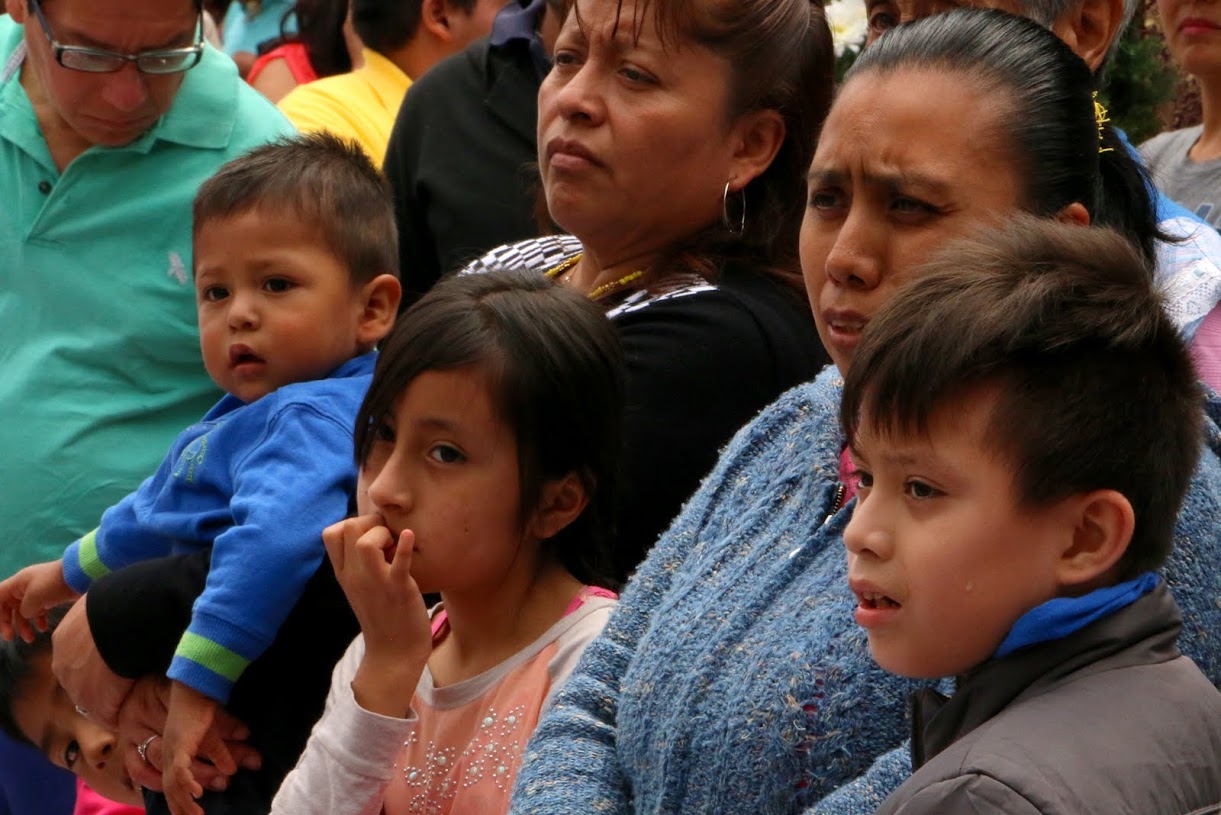 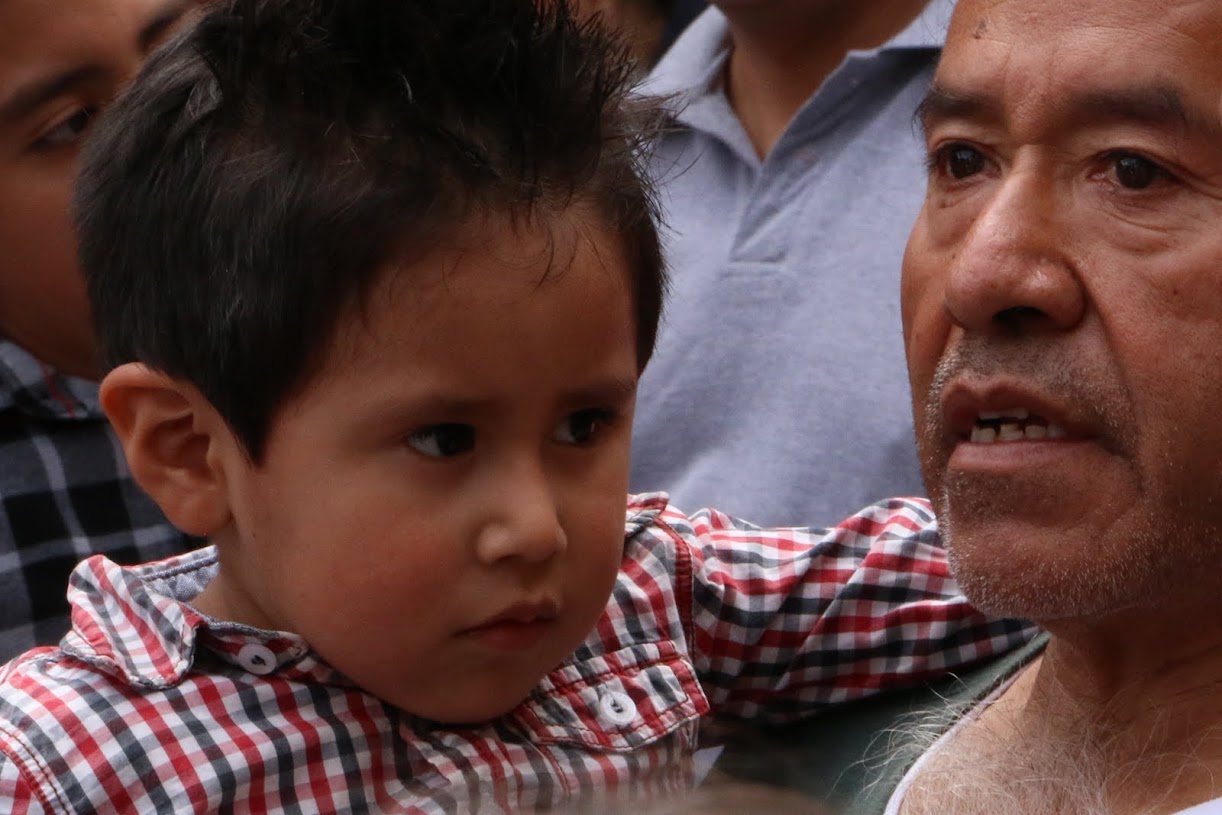 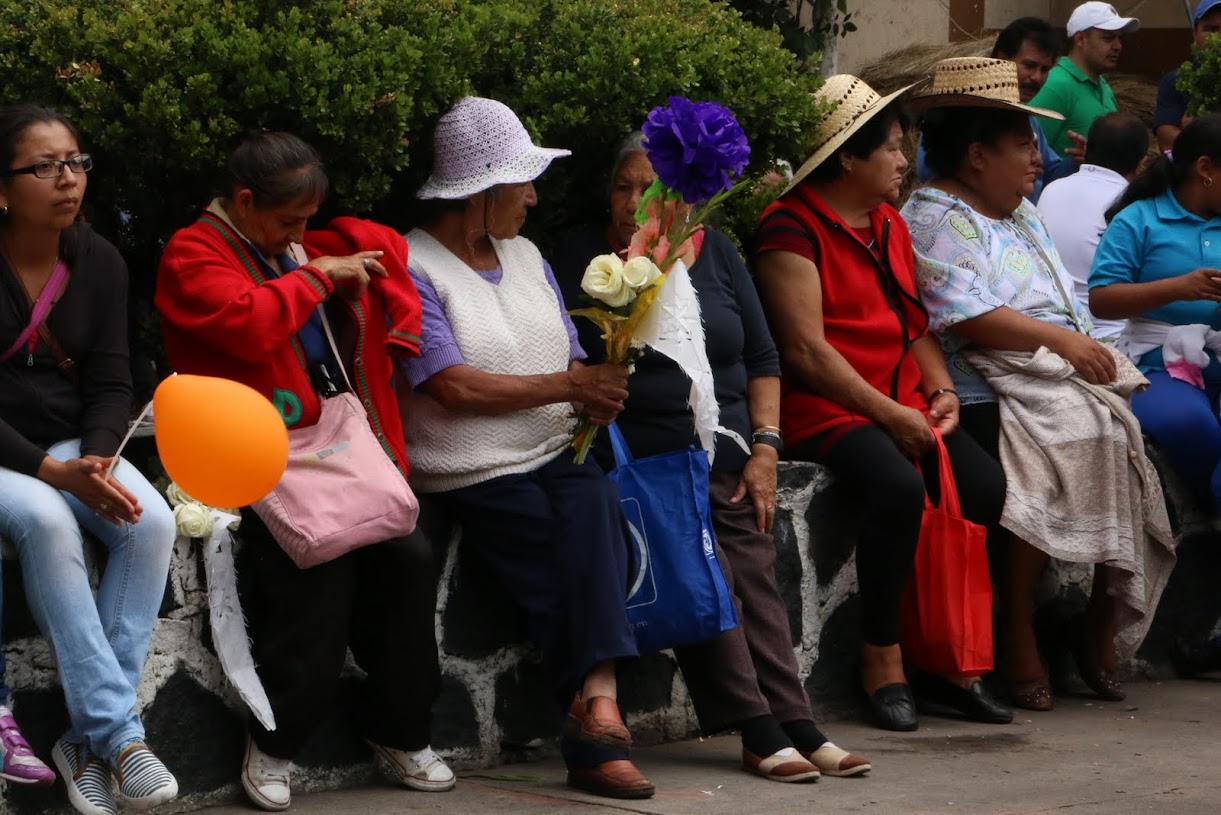 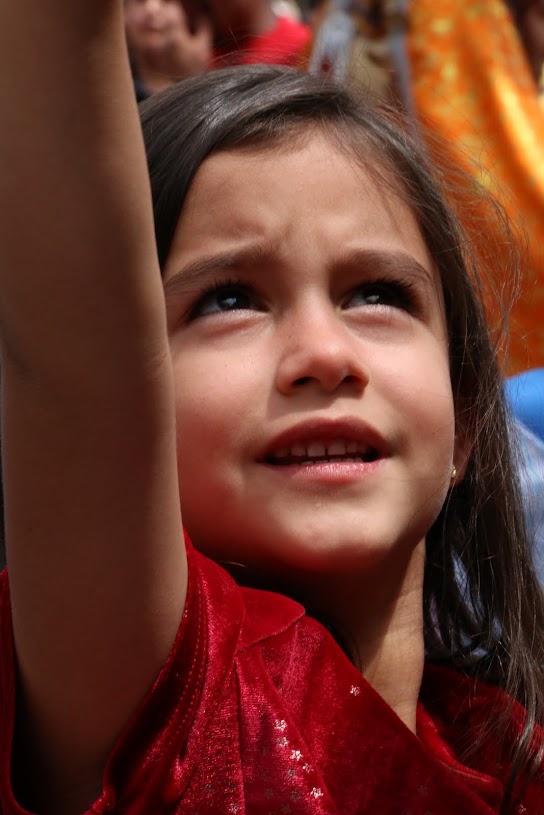 Or at least some of them do. 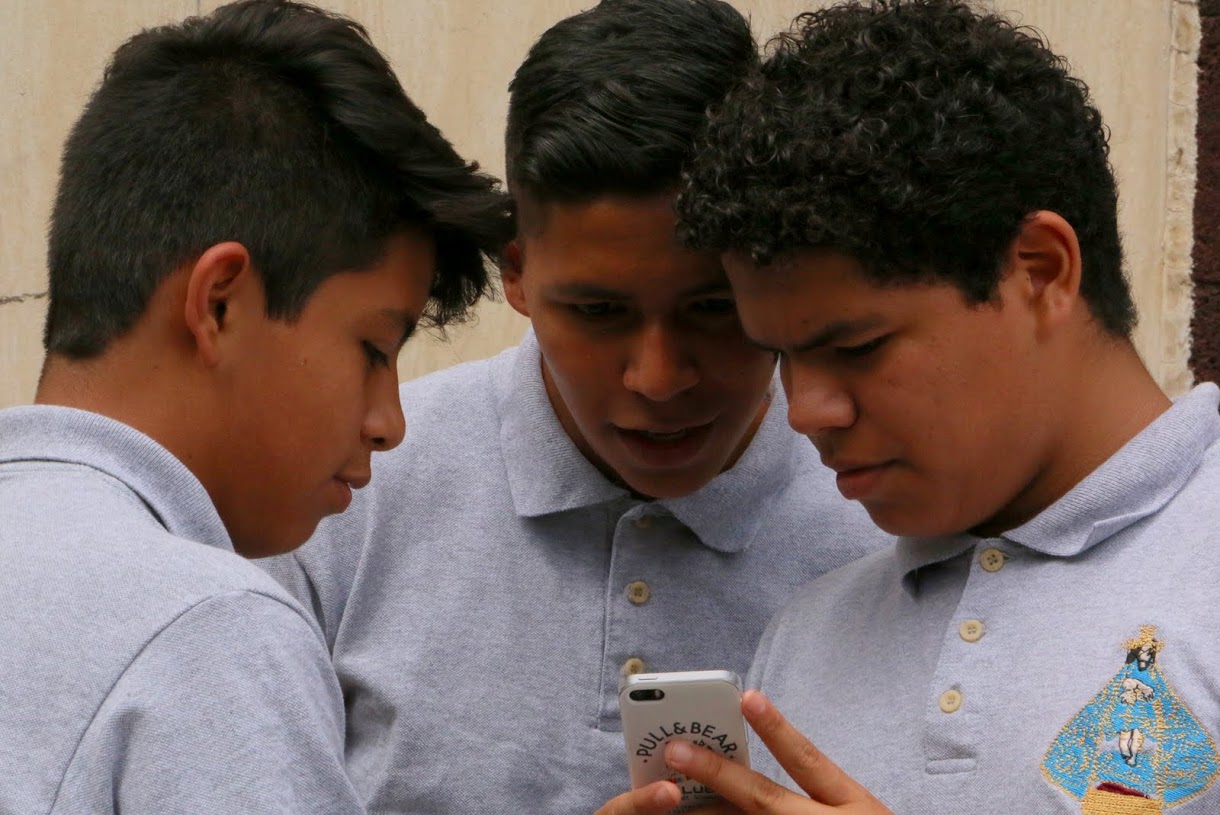 The saints are carried into the church for celebration of Mass. 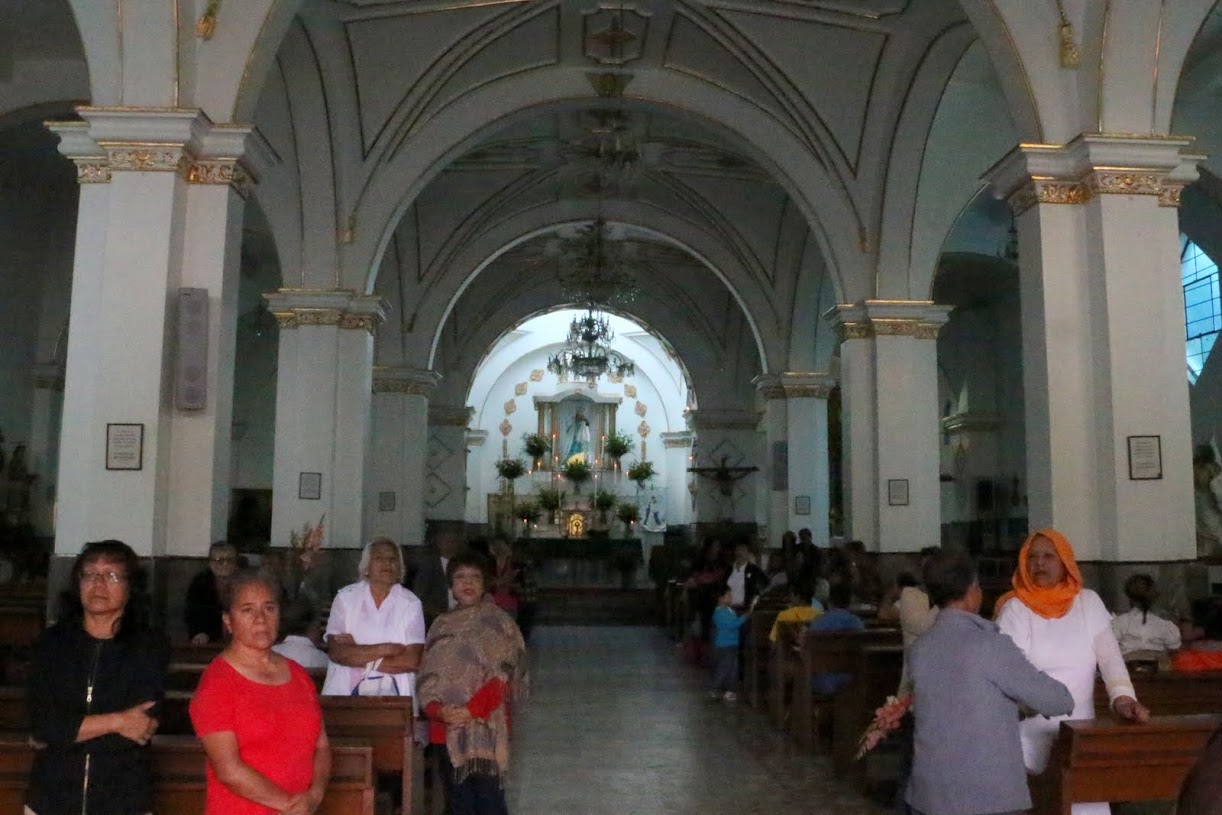 A group of rondalla musicians accompany the ceremony.

Outside, the clean-up begins.

So ends another passage of el Señor de la Misericordia from one pueblo of Coyoacán to the next. This one is especially memorable for its elaborate, colorful, flower-bedecked parade of multiple saints and its charro dancers.

As we walk out of Pueblo Candelaria, we note some explicit statements of its indigenous roots.

So one has the sense that Candelaria is a pueblo active in defense of its ancient territory, resources and identity.

It is also, clearly, a traditonal working-class neighborhood where one can always find in its callejas something to eat. 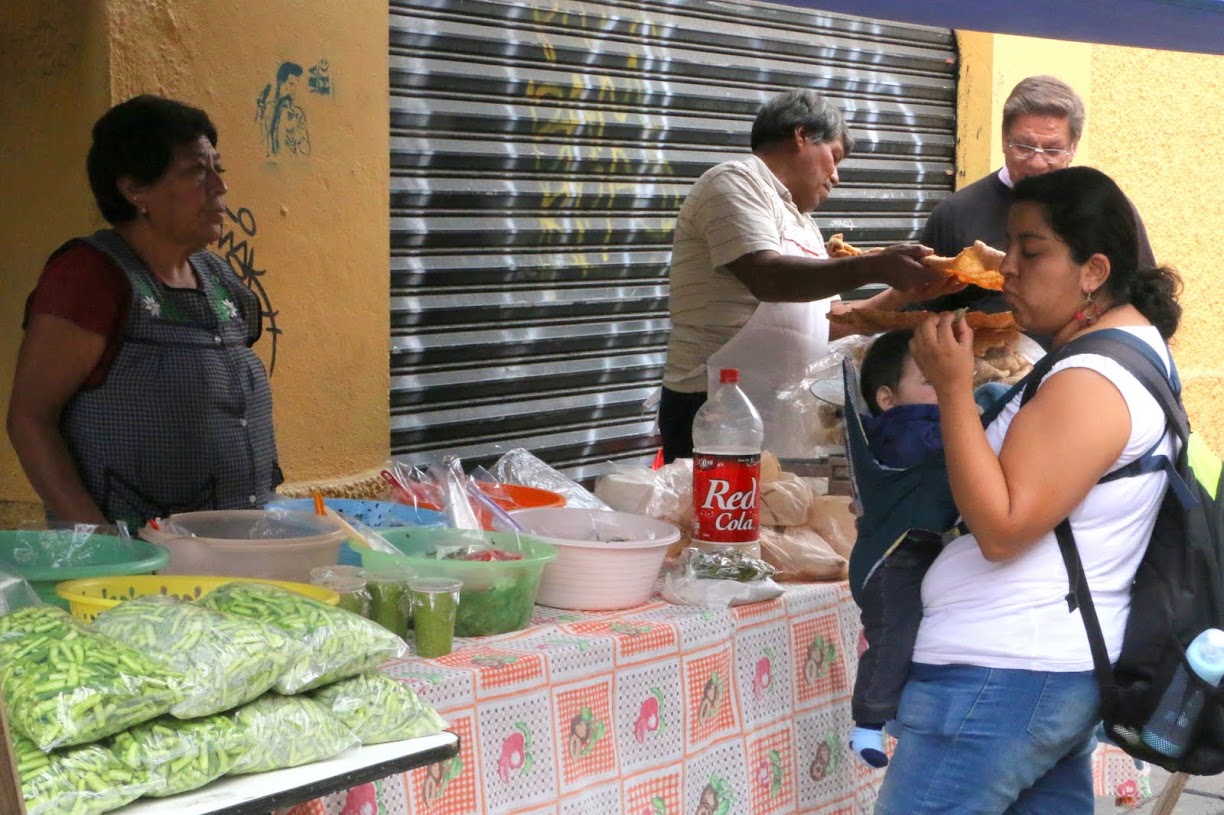 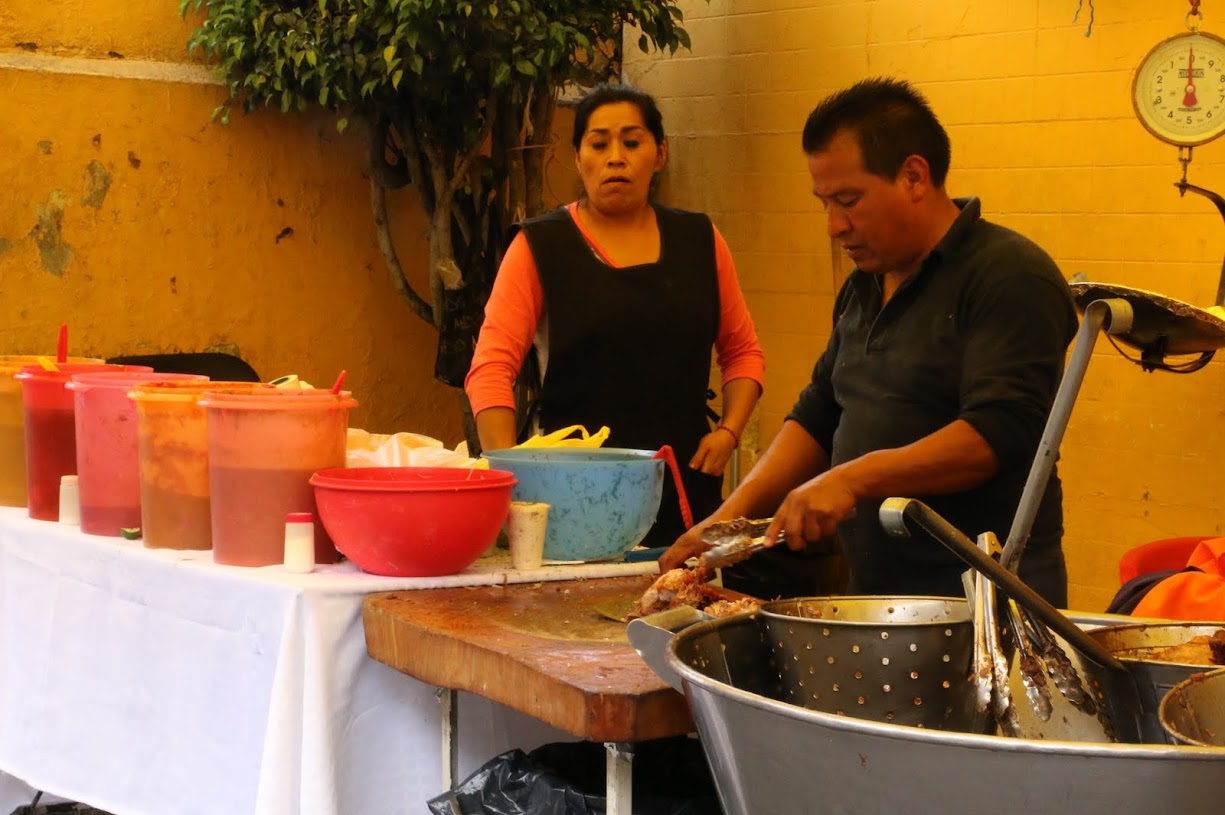 And the beauty and vitality of flowers. 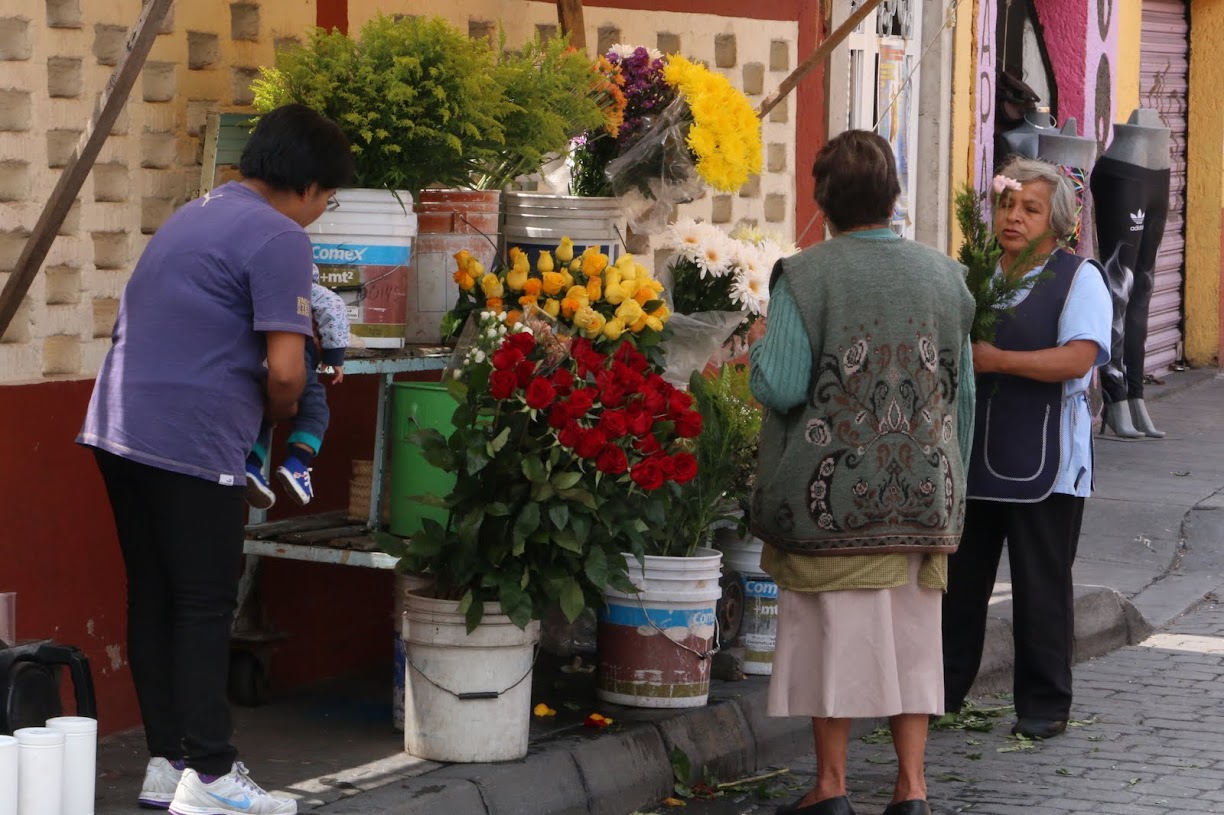 The Spiritual Conquest: The Franciscans - Where It All Began

Coyoacán: Pueblo of Tres Santos Reyes and the Lord of Compassion