Continuing our encounter with the murals painted by José Clemente Orozco for the National Preparatory (High) School in the Antiguo Colegio de San Ildefonso, we climb to el primer piso, the first upper floor. After our confrontation in the stairway with the primal conflict of the Spanish Conquista of the indigenous, we are abruptly brought back across four hundred years to the pre-Revolutionary days of the early 20th century.

Those Above Versus Those Below

Here the theme of conquerors versus conquered is transformed into a more modern version, that of los de arriba vs. los de abajo, those above vs. those below.

The Aristocrats is in the same style of caricature as Orozco's Banquet of the Rich on the ground floor. His brush, it might be said, is even mightier than the pen. The postures and the faces say it all. 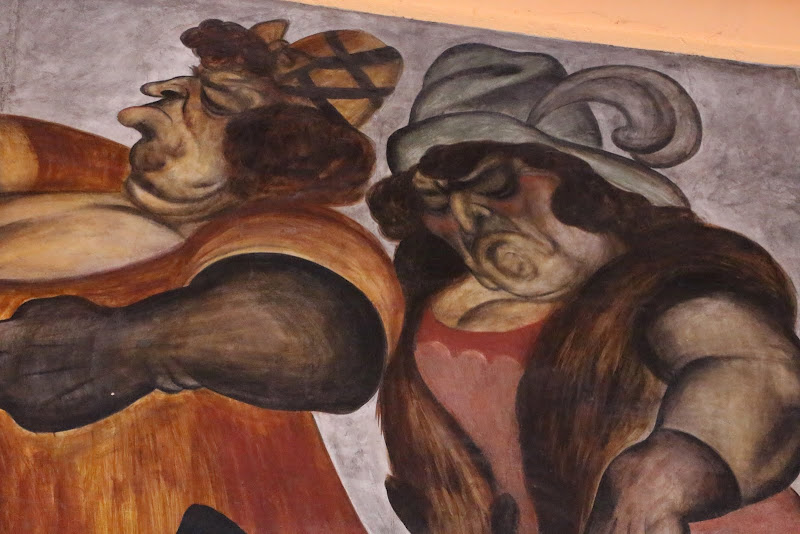 Beneath the feet of "these of the above", in a corner, almost invisible in the darkness, lies the object of their scorn, an apparent pile of grey rags. 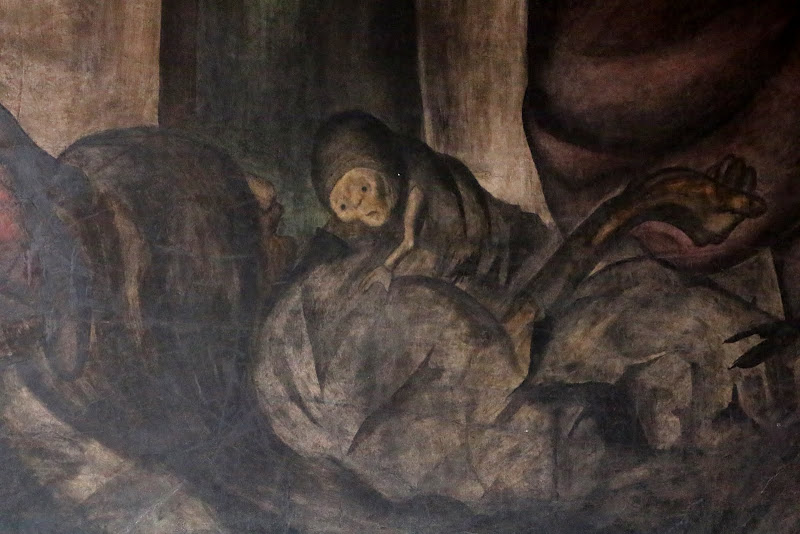 The almost shapeless form is a woman lying on her back, one hand upturned in classic begging posture, the other holding a skeletal, desperate baby.

The Law, Justice, God and Liberty

From this scathing portrayal, we move on to meet other murals in the same caricature style, but more symbolic in their content.


A drunken Law and Justice dance. The scales that should impart fairness seem about to fall from Justice's hand. Her skirt is stained by a bloody hand print, possibly raised in a failed protest.

And next to terrestial Law and Justice, the Final Judgment. A cross-eyed Father God, looking annoyed and/or otherwise out of sorts, his World slipping from his hand, sits above the adoring bourgeoisie, with halos over their stovepipe hats and bonnets. 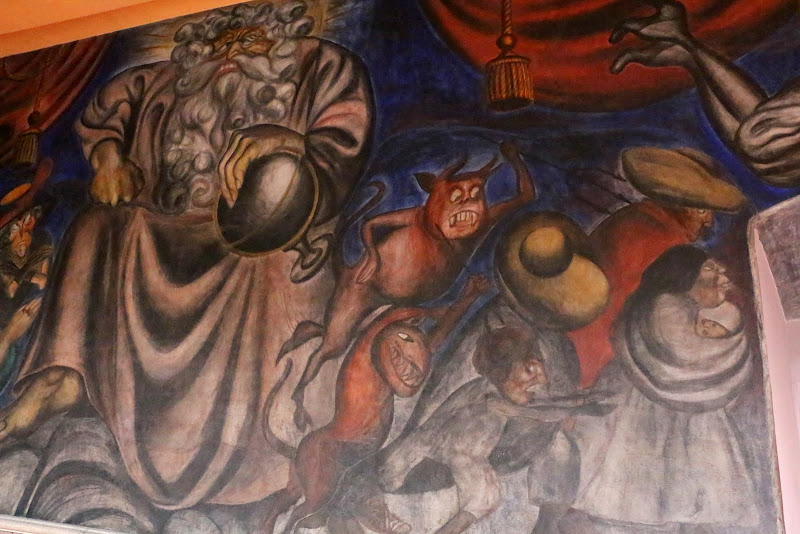 And to God's left, devils pursue and hound the poor, who flee from the Lord's presence.


And just beyond, Liberty, wearing her Red Cap, hangs from the fly space of a theater, like a Deus ex machina meant to come to the rescue and break the bonds of servitude, but she is inept, toothless and semi-conscious at best. It is a sad comedy, a burlesque of the Revolution.

Orozco's last charicature is an even more sardonic take on the Revolutionary rhetoric of Liberty and Justice for All. A rotund member of the bourgeois, identified by the watch fob over his vest and his fine shoes, disguises himself as a poor man, even a Christ figure with his crown of thorns. He holds out the promise of the Red Cap of Liberty to the poor worker, who, himself has an almost simian face. Behind the distracted worker, el acecho, the stalker is poised to stab the laborer to death.

One recalls Orozco's words about the Revolution,


"Buffoons and dwarfs, trailing along after the gentleman with the noose and dagger, in conference with smiling procuresses."

Then Orozco hits us with a symbolic ton of bricks, his words in images:


"The world was torn apart around us. Troop convoys passed through on their way to slaughter. Trains were blown up. Wretched Zapatista peasants who had fallen prisoner were summarily shot down. People grew used to killing, to the most pitiless egotism, to the glutting of sensibilities, to naked bestiality."

Painted in 1926, Orozco presciently places the Nazi swastika near the center. The National Socialist Party had been founded in Germany in 1920.

Included in the pile are other symbols of power: the Sacred Heart of Jesus, a bishop's crosier, a king's crown, the Mosaic tablets, an olive wreath, an Aztec eagle warrior, the Roman fasces, bundle of sticks, which became the symbol of Italian Facism after World War I, the skull of a horse.

In this dismal landscape only two points of color survive, the blue feather pen of the written law and the ubiquitous Red Cap of Liberty. Three crows feed on the refuse: the one on the left perched on the claw of a dead eagle, the symbol of Mexico, buried under it all.

We wonder how Orozco could have gotten away with painting such a devastating, damning portrait of the Revolution, together with his sardonic burlesquing caricatures, in the government's own National Preparatory School, where the future leaders of the post-Revolutionary regime were to be formed. With that question, and wondering what more Orozco could have in store, we climb to the topmost floor.


Of Revolution and Humanity, Earth and Sky


Here we meet a quieter, more realistic, but subtly moving set of images of the Revolution. The Mexican family—all in Orozco's favoite "colorless" greys and tans—sits close together, subdued, stoic. One woman cares for an ill or exhausted but substantial man, while a second cradles a newborn, everyday embodiments of the iconic Virgin of Guadalupe and the Virgin Mary. A couple, faces invisible to the viewer, hence anonymous yet universal, embrace and look toward an unfinished pyramid-like edifice. Beyond is a stunning, impossibly intense, cobalt blue sky.

We have seen this blue before, here in San Ildefonso. First, in the firmament of Diego Rivera's Creation, then, in Orozco's disturbing Revolutionary Trinity, on the ground floor, and in a less saturated mode, as the backdrop for his burlesque theater version of Heaven on the floor just below us. In the series of murals here on the top floor, this blue becomes the counterpoint to the earthly, subdued, human, painful realities of the Revolution.

Son bids farewell to mother, husband to wife, as they depart for the war. Here the blue, painted on a wall, is only a pale echo of the sky.

Another son receives the blessing of his old mother. The plows that are his work and that he is also leaving behind, sit inactive. The sky conveys a pure, infinite force of nature.

Laborers begin to leave their tools, and their women. Behind a red wall, the azure sky.

Here we meet another Revolutionary trinity, but a realistic one—weighed down by their arms, the loss of what they are leaving behind and their possible future. Two women—one with a baby in her rebozo, the other carrying some load—accompany them. Here there is no blue sky.

The women left behind, one with a baby, one crying. The plows sit, unemployed. But there is that impossibly blue sky.


What simpler image could there be of the inevitable outcome of war, of violence, than a gravedigger. His preparatory work evidently done, he sleeps while awaiting the culminating act of burial. But the sky is blue.

Feeling sobered, as subdued as the paintings, we return to gaze again at The Family. Stoic, solid, bonded, comforting one another in the midst of life's challenges, losses and hopes. And the sky is so blue.

Once again in our tour of San Ildefonso, we feel how far we are—how far Orozco has brought us—from Rivera's idealized Ballad of the Revolution, painted at virtually the same time on a similar top floor, around a similar patio of a similar former colonial building just two blocks away. Two visions of a Revolution, but worlds apart.

See more on the Mexican Revolution and Mexican Muralists

For the story of the Mexican Revoluion, see: Mexican Revolution: Its Protagonists and Antagonists
Posted by Reed Brundage at 5:28 PM